CHURCHES AND SCHOOLS.
Chicago disputes with Brooklyn the title of “City of Churches,” or did before the fire. The number before the great conflagration was one hundred and sixty-five. The loss was thirty-nine; the aggregate estimated value of those structures was $2,281,500. Those in the North Division will nearly all of them, if not every one, be re-built up on the old sites. In a few cases rebuilding is now in progress. In the South Division none will be rebuilt in their former locations, with one exception, the Clark Street Methodist Episcopal, which is also a business block. The St. Mary’s (Catholic), First and Second Presbyterian, the Trinity Episcopal, the St. Paul (Universalist), and the Swedenborgian, all stone edifices, and, except the last named, massive structures, will every one locate farther south.

Two magnificent temples of worship spared by the flames have since been pressed into secular service. The Methodist Church on the corner of Wabash avenue and Harrison street is now the Chicago Post Office, and the Church of the Messiah (Unitarian) Rev. Robert Laird Collier, pastor, situated a few numbers further south on the same avenue, is now used former cantile purposes. The annual rental paid by the Government for the former is $20,000, the lease running three years. The church has since bought the Olivet (Presbyterian) Church property, corner of Wabash avenue and Fourteenth street; the latter having united with the Second Presbyterian, of which Rev. Dr. Robert Patterson is pastor, and which is now erecting a grand edifice on the corner of Michigan avenue and Twentieth street. The Church of the Messiah now worships in what was the Calvary (Presbyterian) Church, corner of Indiana avenue and Twenty-second street. The building is used during the week for business; the first floor is a store, the second, where the services are held, is devoted to the uses of the Bryant and Stratton Business College. We may add that two or three other small churches have been secularized.

One of the more notable results of the fire has been ecclesiastical marriages. These have not been so much unions made for convenience and economy, as from choice,—genuine love matches. The First and Calvary Presbyterian Churches set the example, and a spacious new edifice on the corner of Indiana avenue and Twenty-first street has already been so far completed as to be tenable. The Second Presbyterian and Olivet Churches, now one, laid the corner stone of their new house in September. The last wedlock of this kind was the bridegrooming of the South Congregational Church by the Plymouth Church, of which Rev. W. A. Bartlett is pastor. The edifice on the corner of Wabash Avenue and Eldridge court, built by the Plymouth, has been sold to Bishop Foley, of the Roman Catholic Church, and will be soon re-dedicated. While the first “married couple” named has already got to keeping house in the new home, the last is spending a sort of honeymoon in the home of the bride, corner of Indiana avenue and Twenty-sixth street. It is quite too small, and before the second fire anni versary a spacious new Plymouth Church in that vicinity will probably be in process of erection. The actual church building of next year will undoubtedly exceed that of this year.

The public school houses destroyed by fire were: La Salle street Primary; North Branch Primary; Elm street Primary; Pearson street Primary; and the Newberry, Ogden, Franklin, Kinzie, Jones, and Dearborn schools. They could not be replaced for less than $250,000. Those built since the fire or in course of erection, are as follows: 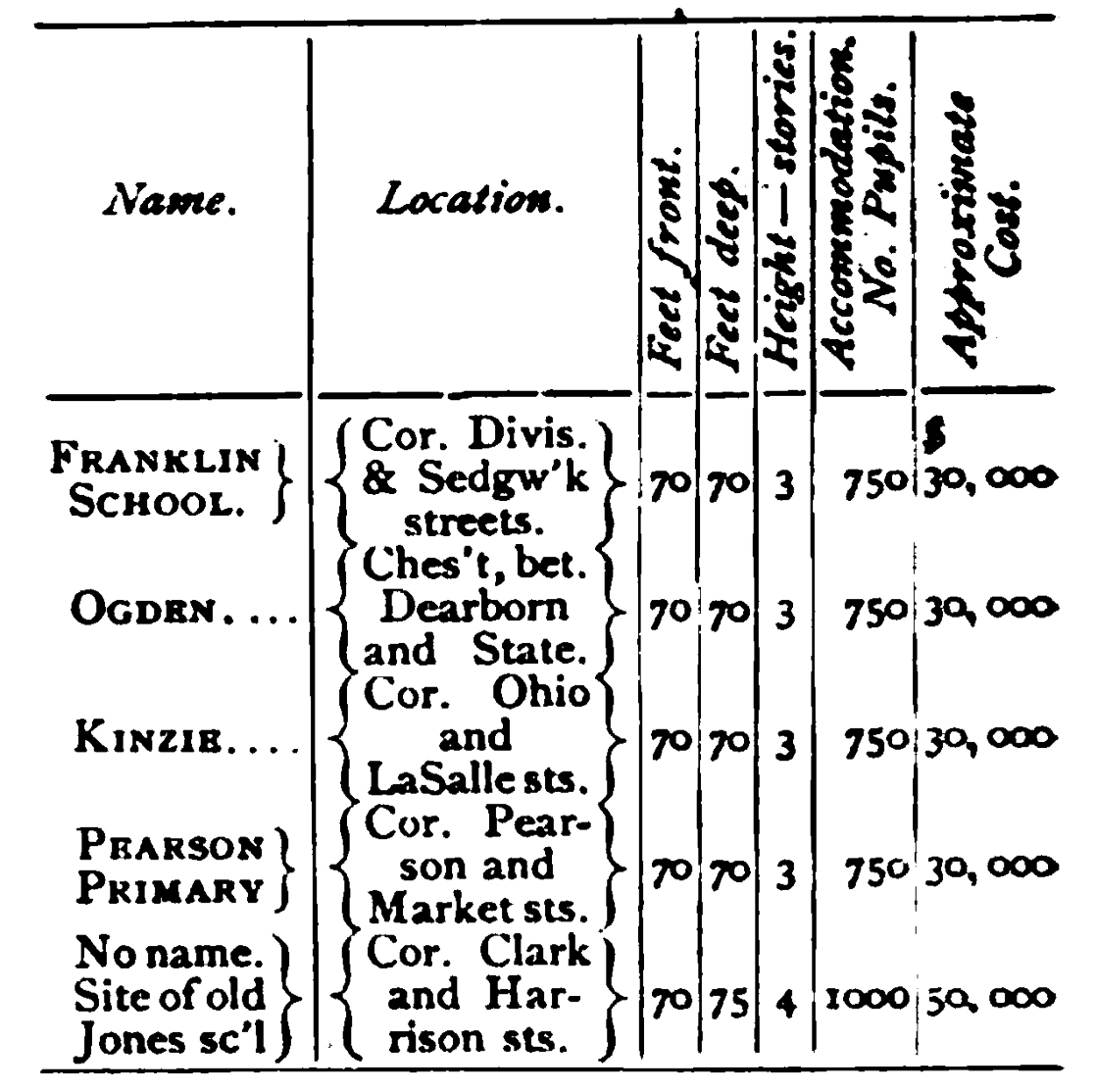 These are all substantial, convenient, and commodious, but not particularly ornamental. It is probable that by another year Chicago will have more public schools than it had before the fire, and better ones, too. The rapid increase in our population renders this absolutely necessary. We can no more get on without school houses than business blocks. They equally belong in the category of “necessities of life.”