Judge L. B. Otis is about to put up, for stores, on the corner of State and Monroe streets, a four-story and basement building, with an elegant front of gray or red sandstone. The size upon the ground is 196×120. The corner store will be double, 48×120, the ceiling supported by handsome columns. 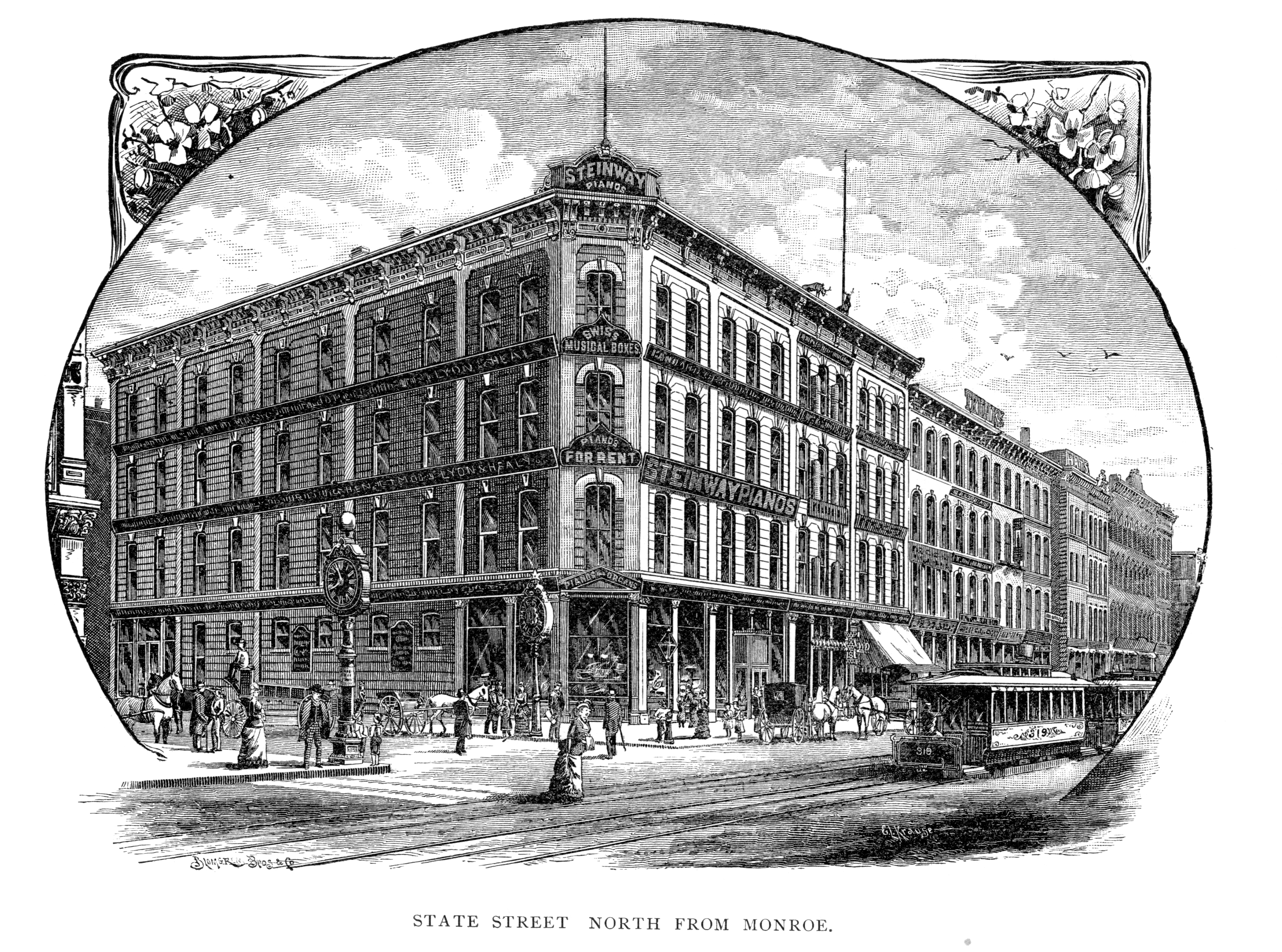 SMITH & NIXON—LYON & HEALY.
Like the star Epsilon, in Lyra, this house is a double double, the two firms of Smith & Nixon and Lyon & Healy baring adhered touch other faithfully through much prosperity and some misfortune, ever since they first joined heads in our midst in 1861. Since that year they hare been burned out twice, the first fire being Sept. 4, 1870; the last, one year ago to day. But though they were thus doubly affected, they were both in first-class financial condition after the great fire, and promptly paid all their liabilities at maturity, without asking for extensions. We may here note that Mr. Nixon’s fire-proof building, then nearly finished, was the only one that paced successfully through the flery ordeal of Oct. 9, 1871

These firms are Northwestern agents for the celebrated Steinway pianos, for the almost equally celebrated Burdett parlor organs, and for the musical publications of Oliver Ditson & Co. They have represented these ever since their establishment here eight years ago, and the thousands of our citizens who knew them in their magnificent quarters on the southwest corner of Washington and Clark streets can attest the popularity of the two firms, while the many instruments they sold there are still sounding their praises in all part of the great West. Those instruments are their own best recommendation, and mere words of praise, however strong, are poor indeed when compared with the ravishing sounds emitted by these chefs d’aeures of the manufacturers’ skill.

Mesers. Lyon & Healey will please take down that immense fire brand sign which they have just put up on the Otis building, corner of State and Monroe streets. The Police Commissioners have been sharp enough to see it, and have sounded the keynote. 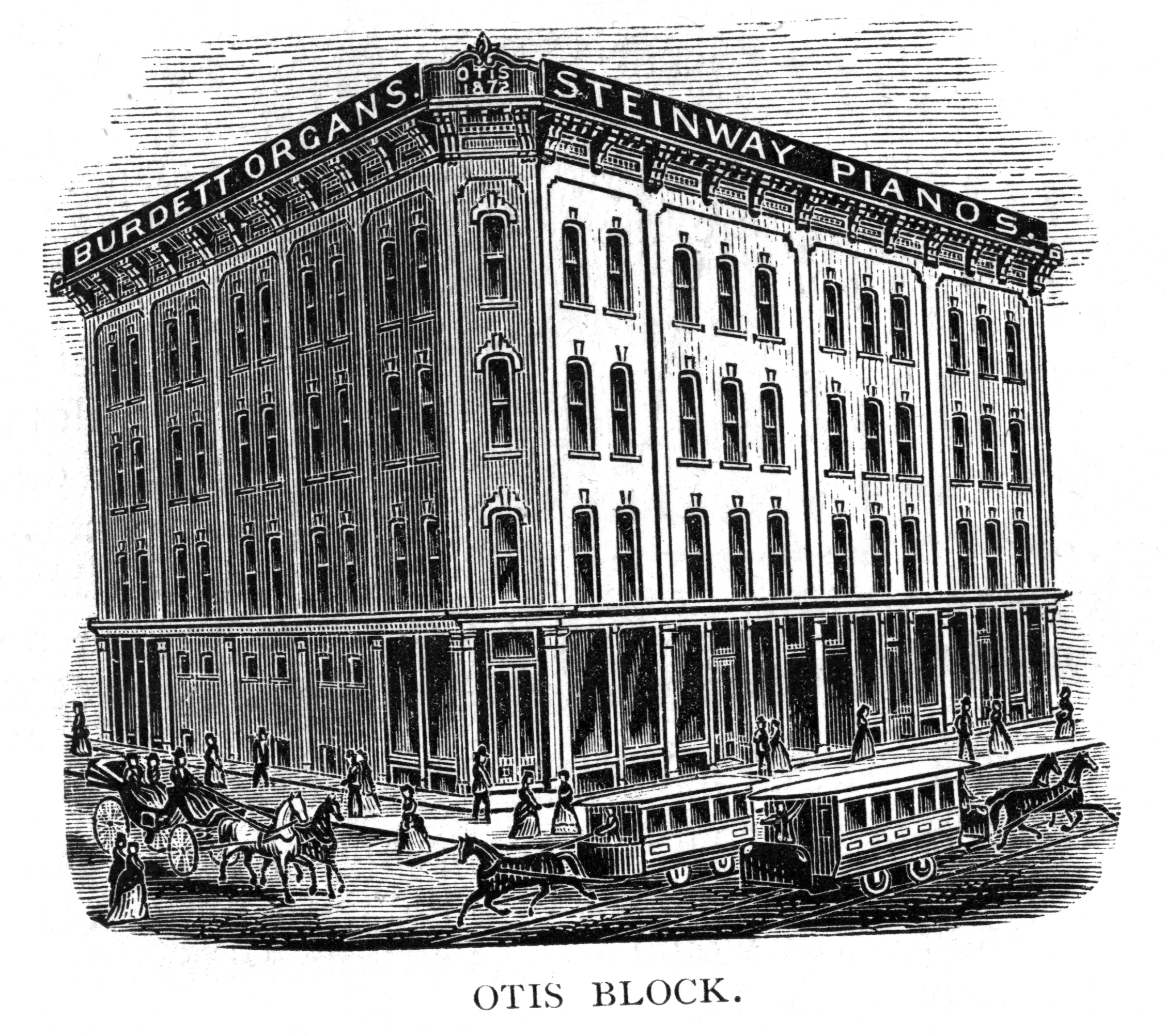 FRANK BROS. TO MOVE.
They Secure the Store Soon to Be Vacated by Lyon & Healy.
Frank Bros., the prominent dry goods merchants, have secured a lease of the spacious and elegant premises which are about to be vacated by the music firm of Lyon & Healy. The well-known building, Nos. 156 to 162, presents a frontage of ninety-six feet on the best business part of State street, and is of immense depth and floorage. It will be thoroughly remodeled and adapted for the dry goods business. Messrs. Frank, however, will not occupy it for a year to come, their lease dating from May 1, 1895, for a term of years.

The floor space of the building, consisting of four foors and basement, amounts to 35,000 square feet, which, coupled with its advantageous position, makes it a very impregnable business citadel. In fact its advantages have been most. strikingly demonstrated by the success of Lyon & Healy. When the music firm started business at that corner twenty-two years ago they occupied only a frontage of twenty-five feet; their business has grown so that the big premises will now accommodate only half their stock of musical instruments, and hence their transfer to Wabash avenue. As both the premises and location are specially suited for a department store there is every reason to believe, that Messrs. Lyon & Healy’s successors as tenants will reap a similar rich reward for their enterprise.

Frank Bros., the State street department store firm, went into liquidation yesterday. The members called in James B. Forgan, Vice President of the First National Bank; G. E. Armstrong of the H. B. Claflin company, Wiliam Meyer of William Meyer & Co., and E. Price of F. Butterfield & Co. of New York, to act as an advisory committee of liquidation, and suggest the best plan of speedily disposing of the business.

It is the intention of the firm to sell out the business as speedily as can be done advantageously. The Franks will place all the money now in their hands and what comes from the disposition of the stock in the First National Bank to the credit of the firm’s liquidation account. It will be held in trust for distribution among the creditors on the first day of each month beginning Feb. 1, 1899. The entire plant will be disposed of, it is expected, by April 1.

A letter which the firm has addressed to the public states:

We have worked under many disadvantages. Four years, ago we moved into our present quarters, expending in moving, reconstruction, improvements, and equipping over $100,000. We took a lease at about $85,000 per annum. We were unable to make enough to pay this rent, although at the time we rented out a number of departments to reduce the cost. All except three of them have since been absorbed by us. We obtained a reduction of $13,000 per annum, which expires May 1, 1900. One of the prominent mercantile agencies has treated us in a merciless manner, greatly affecting our credit.

The firm is now preparing a statement of its assets and liabilities, and it is the intention to go ahead and take an account of the stock now on hand, so as to be able to tell definitely whether the assets will meet the liabilities. This is being done in accordance with the advice of J. B. Forgan, who suggested to August Frank yesterday that such action would meet with the approval of the creditors, who would allow the firm to proceed with the liquidation in the manner proposed. The several claims against Frank Bros., held by manufacturing firms, probably will not be pushed further in the courts.

The Committee on Buildings and Grounds of the Board of Education learned yesterday that it was being robbed gradually of an entire building, the Otis Block, State and Monroe streets. Architect Mundy reported that already three elevators had been carted away without the knowledge or consent of the School board; that so much of the steam-heating plant had been taken that what was left was of value only as scrap iron; that the roof was going the way of the elevators, and that prompt action must be taken to prevent the destruction of the building. The committee was dazed and asked the architect to say it over again. Then the matter was referred to Attorney MeMahon, who will report to President Harris, after making an investigation.

The building, which was occupied formerly by Frank Bros., was surrendered to the School board by L. B. Otis some time ago. After the failure of the firm the contents of the block were sold. One bill of sale was secured by a man named Fox. When the watchman refused to let him into the building recently he complained to the board. Mr. Mundy then began his investigation, which resulted in the discovery announced yesterday.

Inquiry at Otis Building.
Attorney D. J. McMahon 1s investigating the removal of elevators, steam heating plants, and sprinkling plants from the Otis Building, State and Monroe streets. This property was recently relinquished by the original lessee from the Board of Education, L. B. Otis. Frank Bros., the dry goods merchants who failed, had a sublease from Mr. Otis. Whether under the lease Frank Bros. had permission to construct and operate elevators and other apparatus and then remove them from the building is a matter that is being investigated by Mr. McMahon. 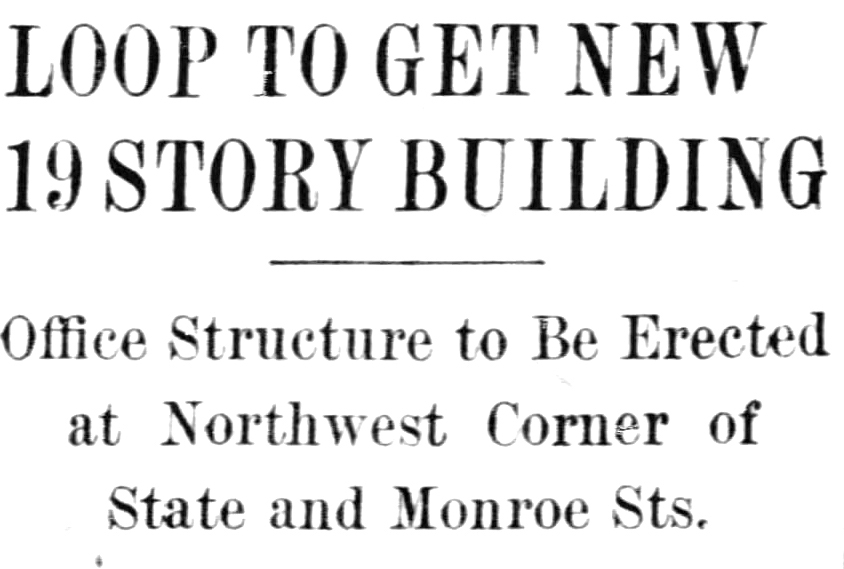 Another great building is planned for the central district. It will be erected by Louis M. Stumer, Benjamin J. Rosenthal, and Louis Eckstein at the northwest corner of State and Monroe streets.

The structure will front ninety-six feet on State street and 120 feet on Monroe street. occupying the ground on which the present North American building stands, which name it will bear. It will be nineteen stories high with three basement, and will be a fitting addition to the group of buildings that already make Monroe and state streets two of the most noteworthy streets in the city.

The building is to be 260 feet high the maximum limit nixed by the new
ordinance passed by the the city council.

Cost Is Put at $1,500,000.
The building which will cost in excess of $1,500. was designed by Holabird & Roche work of construction will begin next May to enable the lessees to comply with the terms of the ground by the board of education.

The building will be uo to date in all its appointments. The first story will De nineteen feet high and the second fifteen feet from the third to the seventh, inclusive, the stories will be eleven and twelve feet high, and all will be adapted by reason of convenience of location, character of neighborhood, light, quality of elevator service. and other interior appointments for mercantile shops and office uses.

The basement will contain a high class restaurant, reached by its own staircase from an entrance at the corner of State and Monroe streets.

The subbasement will be an adjunct of the main floor stores. The sub-subbasement, in addition to the space devoted to heating and mechanical plant, will provide an unpacking room for the font use of the several upper story tenants and sundry storerooms for rent to individual tenants.

There will be nine elevators in all. Space equal to five floors already has been rented and the owners expect the entire building will be under lease upon its completion. 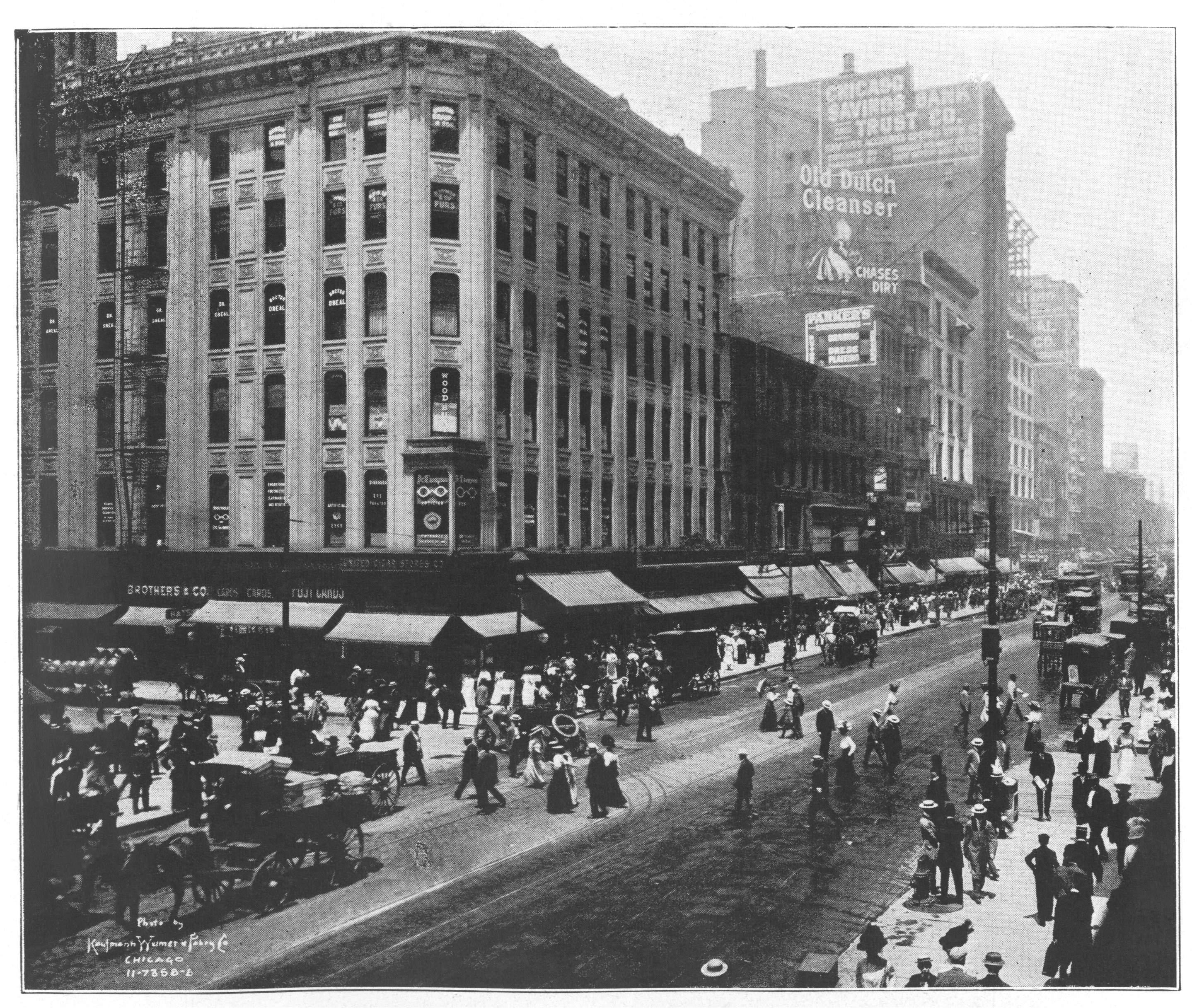 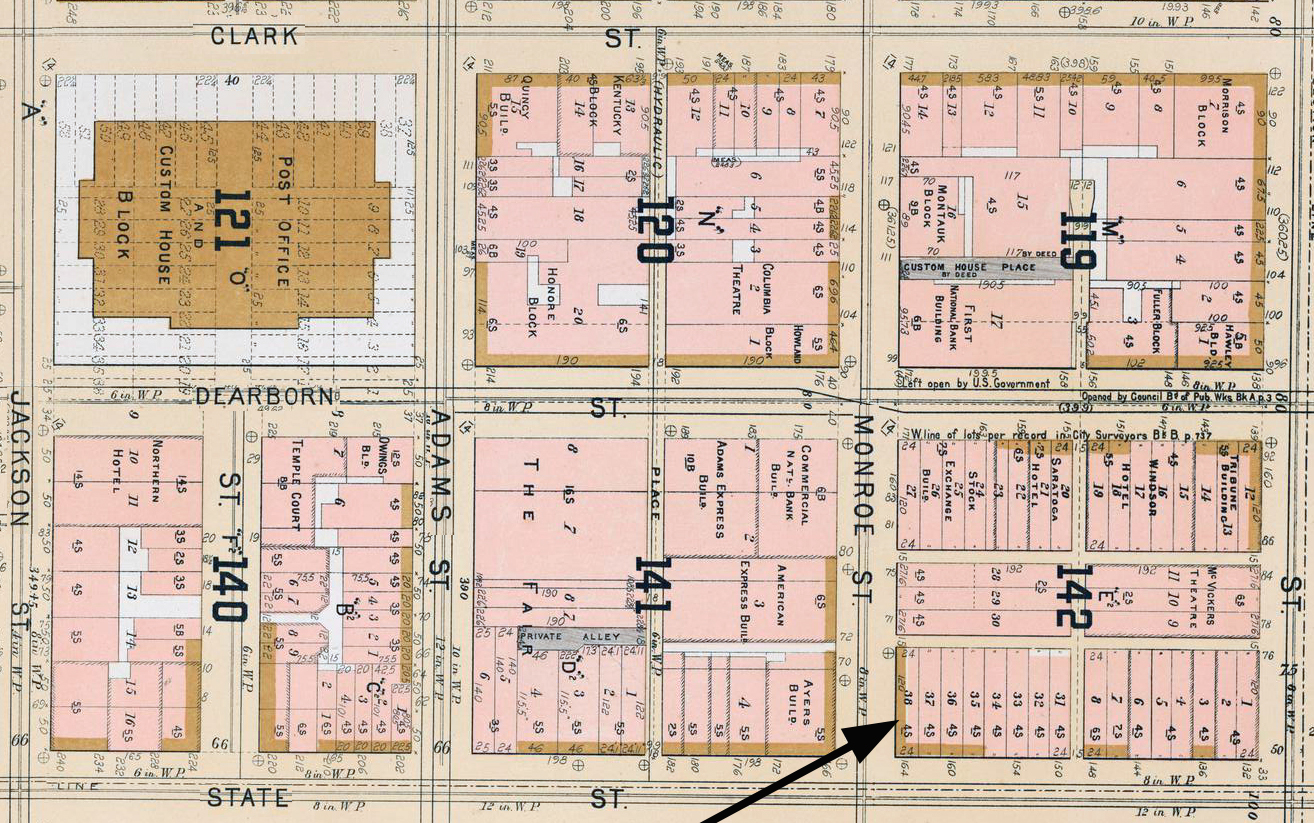