OUR GREAT LUMBER INTERESTS.—THE MANUFACTURE OF HARD WOOD LUMBER, AND THE ESTABLISHMENT OF GEO. E. WHITE, ESQ.
Among the varied interests that go to make up the trade and commerce of the Great West, nine demands more attention than that of the hard wood lumber business, which has assumed hard proportions in this city, and bids fair to enjoy a still further growth. The erection of the hundreds of new business palaces that now line our streets, has consumed an enormous quantity of the finer hard woods, as their superb interior finish will fully demonstrate. No city in the world can boast of so many elaborately finished and and furnished business palaces as our, and of course the raw material must become a large item of our trade. It is the object of this article and the accompanying illustrations to show our readers and the public at large the source from which these finer woods are obtained and brought to market, and also to say something of the principal party engaged in this trade here. Mr. Geo. E. White, whose yards are located at Nos. 122, 124, 126, 128, 130 and 132 North Sangamon st., occupying half of one of our city blocks in extent.

Mr. White is the successor of Hafner and Young, who started the business here in 1858, their yard being at that time located on the south-west corner of Sangamon and Kinzie streets, and since his accession to the business he has greatly enlarged it by his energy and persevering method of doing business, as well as establishing for himself an enviable reputation for straight-forward dealing and integrity in all transactions. His trade, last year, amounted to half a million dollars, and he handled upwards of ten million feet of hard wood lumber. In this branch of the trade, Mr. White is the acknowledged leader, his trade extending all over the United States. Our principal local manufacturers of wood work purchase their supplies of him, as they at all times can find at his yard the very stock they want. 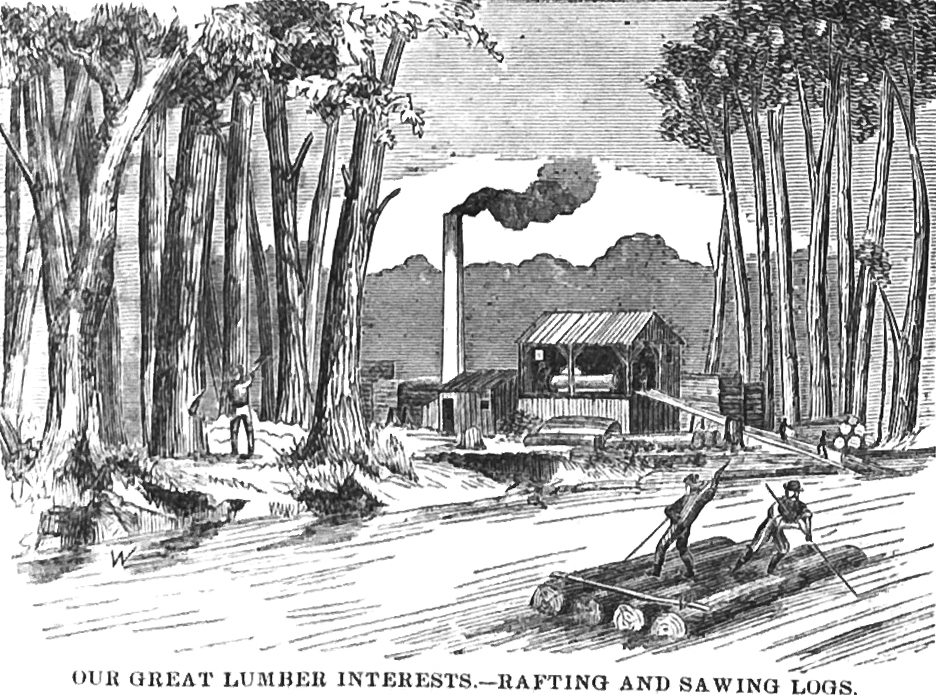 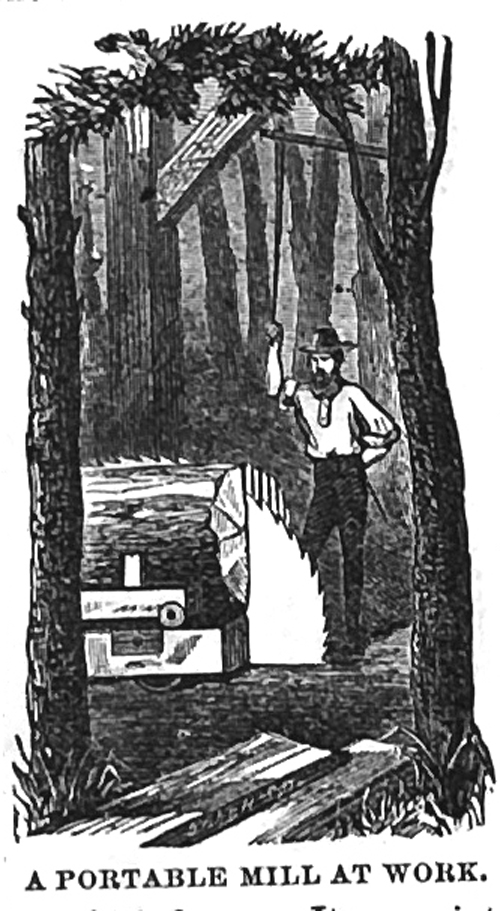 The business of the lumberman extends over much ground and always employs a large capital. Mr. White controls his timber from the stump to the market. He owns extensive timber lands in Indiana and Michigan. At Xenia, Ind., he has large mills, and employs about 100 men. His portable saw mills are taken into the rich forests , and the logs are got out in a rapid and thorough manner. An accompanying illustration shows one of the mills at work. The logs are then rafted down the streams and taken to the mills, the lumber being shipped from thence to yard in the city, so graphically shown by our artist. There is some romance in this business, and it requires but little stretch of the imagination to trace back the richly wrought wainscoting of your office through the rapid transitions it has undergone, until it appears again in the giant tree, the true monarch of the woodlands. The life of the lumbermen has a sort of weird fascination about it, for one who loved the forest in his youth, and played truant so often to lie beneath the shades of of its far-reaching and noble branches. And the life of the lumberman must indeed be pleasant when it arrives at the point of success which Mr. White has attained by close attention to business and a perfect knowledge of its demands. Among the numerous varieties of timber to be found in his yard, are black walnut, of which he makes a specialty, an enormous amount of it being annually consumed in this market, ash, oak, hickory, maple, butternut, cherry, white-wood, &c all of which varieties he constantly holds in stock to fill the immediate demands of his customers.

Mr. White’s office is located at the corner of his extensive yards, at 122 North Sangamon street, as will be seen in the illustration. Here the visitor will get a key to the success of his house. Its appointments are exactly what the business requires, and everything in the most handy and business-like manner. An air ao business prevails, and the purchaser receives the most courteous treatment. He can buy from 50 to 100 carloads of lumber, and depart in peace in the time it has taken us to write this sketch.

Our people do not fully understand the extent of this trade, or the difficulties of supplying the with first-class lumber. This sketch and the accompanying engravings will give them something of an idea of this extensive and important Western iundustry, as well as of the principal party engaged in the trade.

FIFTH DISTRICT.
(Population, 154,679.)
County.—Part of Cook; the Eleventh, Thirteenth, Sixteenth, Seventeenth, and Eighteenth wards of the city of Chicago. 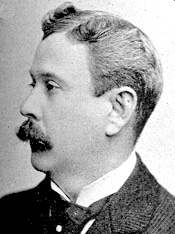 GEORGE E. WHITE, of Chicago, was born in Massachusetts in 1848; after graduating from college at the age of 16 he enlisted as a private soldier in the Fifty-seventh Massachusetts Veteran Volunteers, in which he served under General Grant, in the army of the Potomac, from the battle of the Wilderness until the surrender of General Lee; after the close of the war he entered a commercial college Worcester, Mass., in 1867 he removed to Chicago, a poor young man seeking employment, which he found in a lumber yard at $50 a month; a year later he engaged in the lumber business on its own account, which he has pursued with much success; he is head of the extensive hard-wood lumber firm of George E. White & Co., and is a director in State and and national banks; has served as alderman of Chicago and as State senator, and has exercised a large influence in Republican politics in his State; in 1884 was nominated for Congress by the Republican politics convention of his district, but, although the district was strictly Republican, declined the nomination; was elected to the Fifty-fourth and re-elected to the Fifty-fifth Congress as a Republican. receiving 23,053 votes, against 19,975 votes for E. T. Noonan, Democrat, 257 votes for Haines, Prohibitionist, 233 votes for Courtney, National Democrat, and 1,813 votes for McDonnell, Independent and represents the eleventh, thirteenth, sixteenth, seventeen and eighteenth wards of the city of Chicago.

Evanston police were puzzled last night over the actions of a man who first tried to gain entrance to the home of Edward Hines, millionaire lumberman, who lives at 1456 Ridge avenue, and was later found prowling near the home of another well known millionaire.

The man, who said his name was Herman Franks of 1321 Mohawk avenue, declared he was the confidential messenger from former Senator George E. White, president of the White Lumber company, to Mr. Hines. In view of the made against the life of Mr. Hines Tuesday night, the Evanston police decided to hold the man. They could not reaqch Mr. White at his home, 467 Deming place. The man was unarmed. 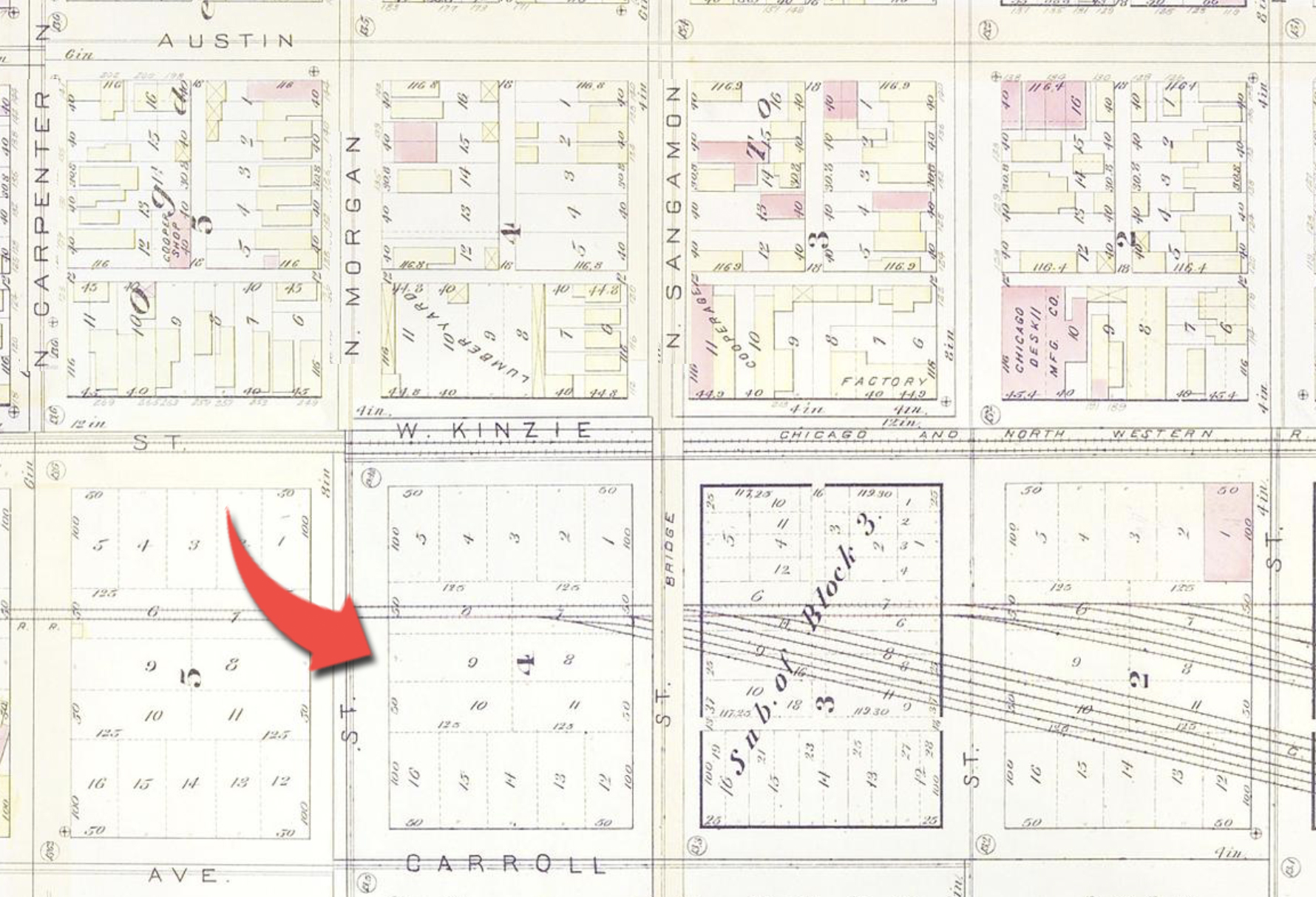