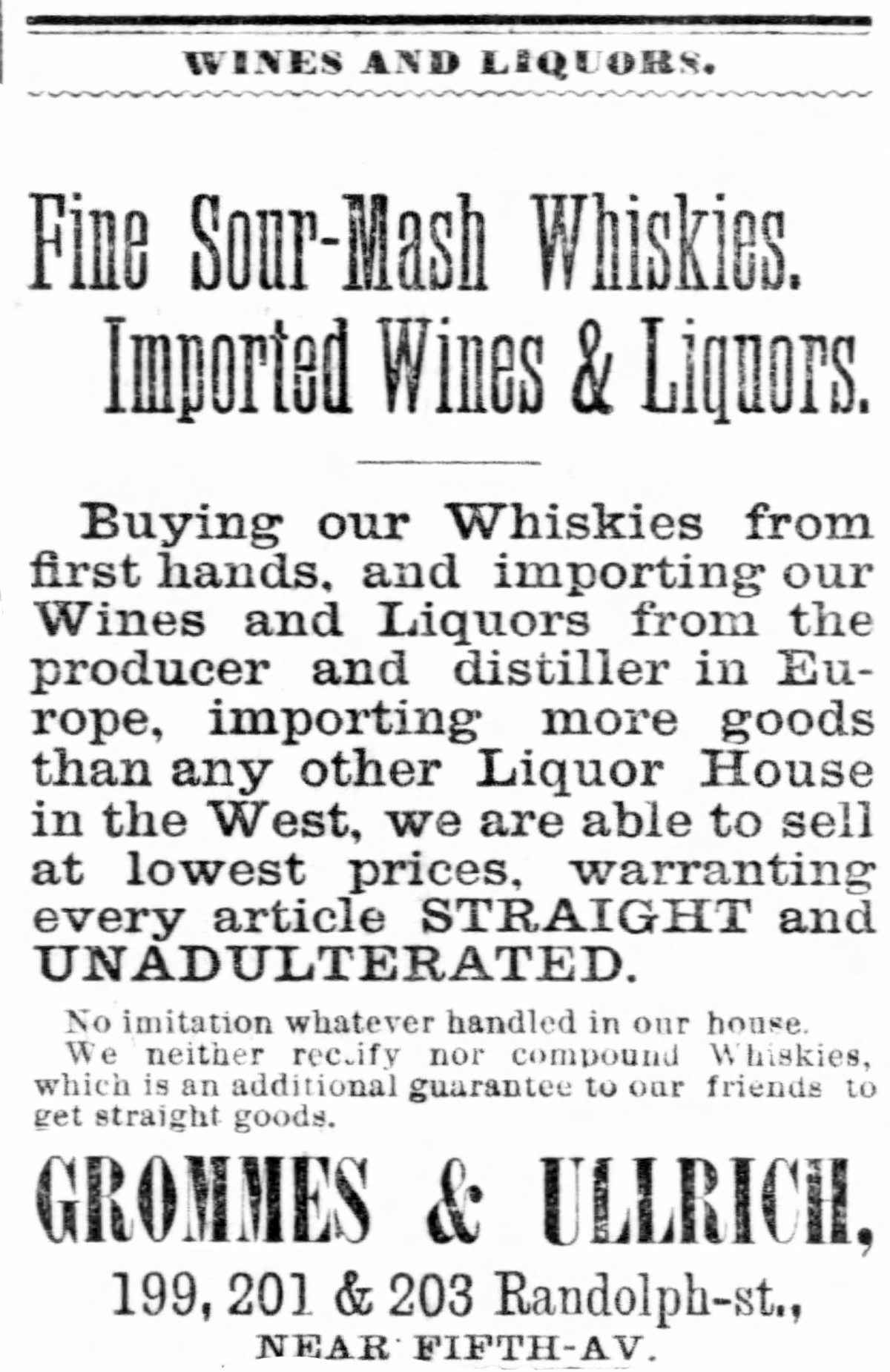 This fine structure, together with the Sherman House, and many other buildings now going up in Randolph street, settles the question of that thoroughfare ever losing its prominence among the streets of our new Chicago. It is owned by Joseph F. Bonfield, Esq., and comprises Nos. 199, 201 and 203. It is just west of the building erected by H. H. Honore, on the northwest corner of Fifth avenue and Randolph street. When finished, it will be one of the largest wholesale stores on this street, and one of the most substantial buildings of its class in the city. Its frontage on Randolph street is about 54 feet, and its depth is 162 feet, the front being of Cleveland and Kankakee sandstone, four stories and basement in height, the whole costing upwards of $50,000. The architect is L. D. Cleveland, Esq.

This large building has been rented to Messrs. Grommes & Ullrich, importers of wines and liquors, who before the fire were located at 146 South Clark street, but since the fire have temporarily transacted business at 229 and 231 West Madison street, where they are now awaiting the completion of their new quarters, into which they will move in August next. The firm is one of Chicago’s old landmarks, having been established in 1860. They buy their goods direct from the wine producers in Europe, besides which they are the agents for several of the largest wine firms in Germany and France, among whom we may mention Cuzol fils & Cie, and Flouch Freres, Bordeaux, France; Jacques Goerg & Co., Chalons sur Marne, Joseph Falck in Mayence, J. Oppmann is Wurzburg, Bavaria, who makes the finest sparkling wines in the world, equal to the best brands of French champagne; Underberg Albrecht in Eheinberg, who makes the finest bitters, called Bonekamp, ever sent to this continent; Ruinart, Pere & fils, Reims, a well known champagne; Kelly’s Island Wine Co., the very best Catawba produced in this country; Buena Vista Vine Society in San Francisco, and Herman Heye, in Bremen, manufacturers of bottles and demijohns.

Connection with such producers as above, renders Grommes & Ullrich the largest firm in this trade in the West. Their trade extends southward to Memphis, and all through the Western States and Territories. They now have thousands of casks and cases of wine on the way for their mammoth new establishment in the Bonfield building. They sell goods either in their store or in their bonded warehouse, and for square and upright dealing they have won an unblemished record.

This house also deals largely in Kentucky whiskies, of which they keep the finest and best assorted stock, buying direct from the distillers. They can therefore compete with any house in this line in the United States. 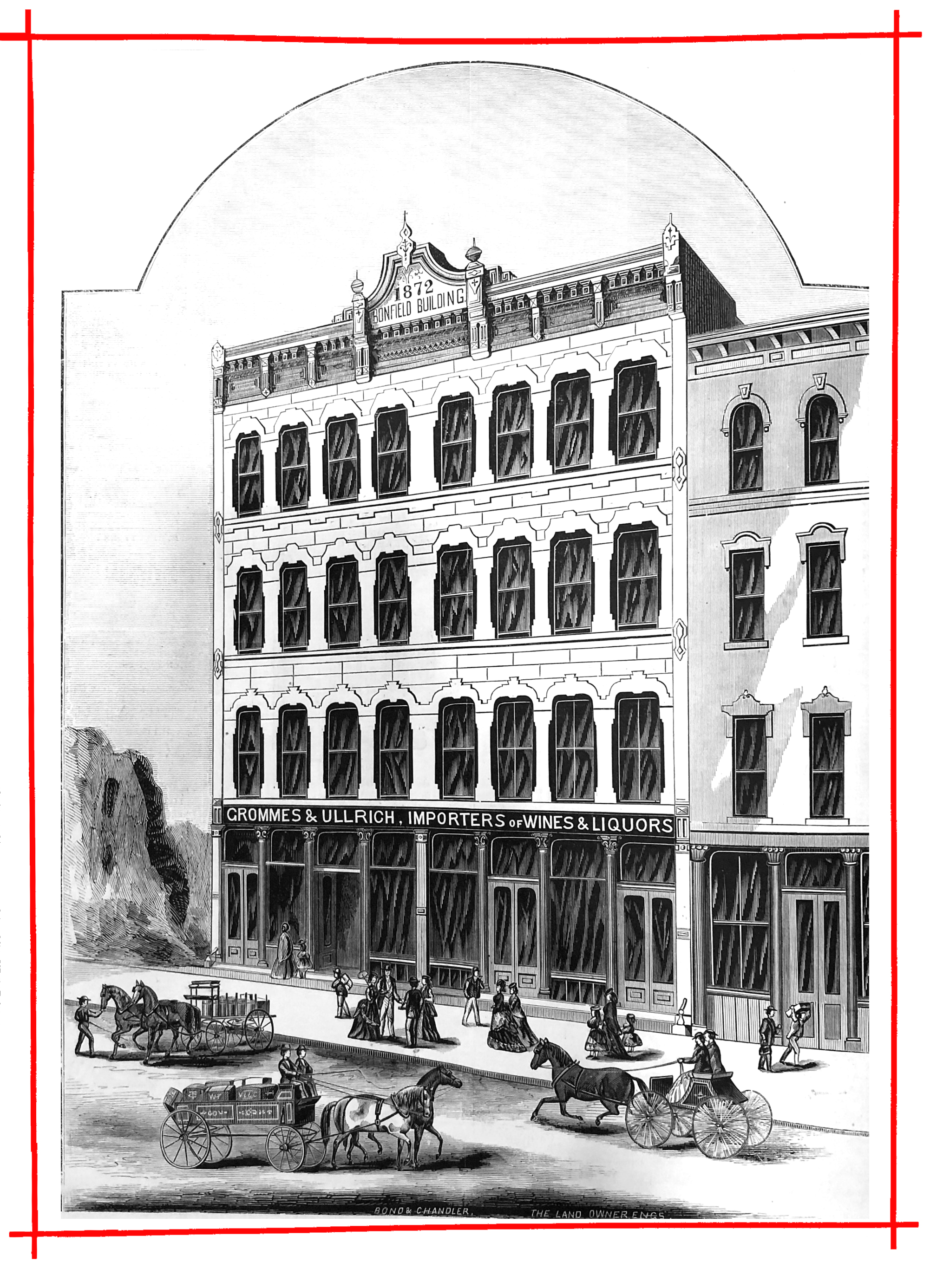 Rebuilt Chicago—Bonfield Block, Nos. 199, 201, and 203 Randolph Street, to be Occupied by Gromes & Ullrich, Importers of Wines and Liquors.

Messrs. Grommes & Ullrich, one of the oldest and largest wholesale wine and liquor houses in the West, who have been in business in Chicago for the past twenty years, will remove this week to the spacious double store at Nos. 174 and 176 Madison street, between Fifth avenue and LaSalle street. This firm are the sole Western agents for the celebrated “O. F. C.,” E. H. Taylor, Jr., the Bond & Lillard, and the Waterfill & Frazier brands of sour-mash whiskies, much are acknowledged to be the best whiskies made in this country. They also import all the leading brands of foreign wines, brandies, gins, etc., and every one of the largest and finest stocks of liquors in the country. 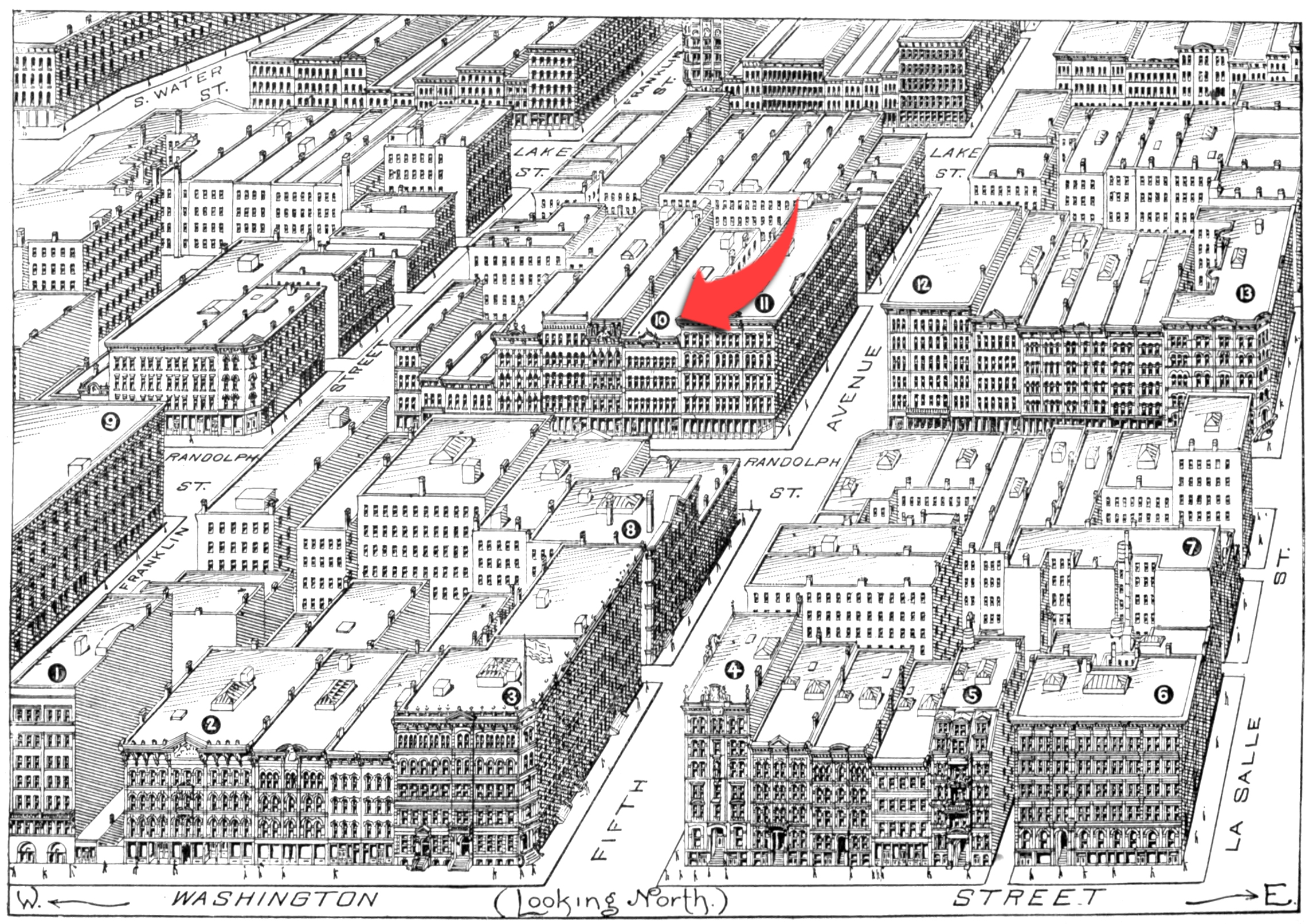 The Albert Pick building at 208-12 West Randolph street, torn down in 1934 and space used for parking. 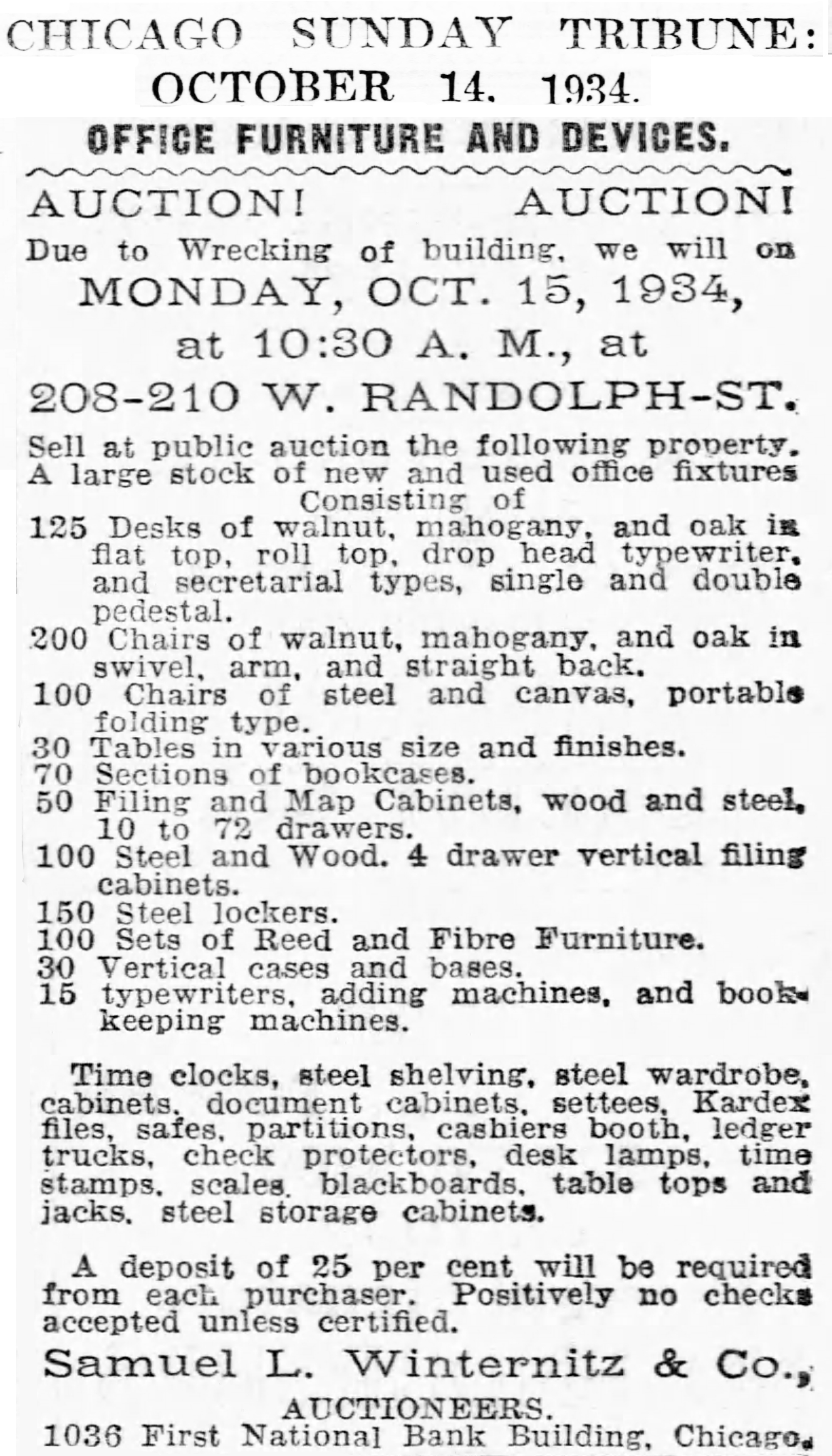 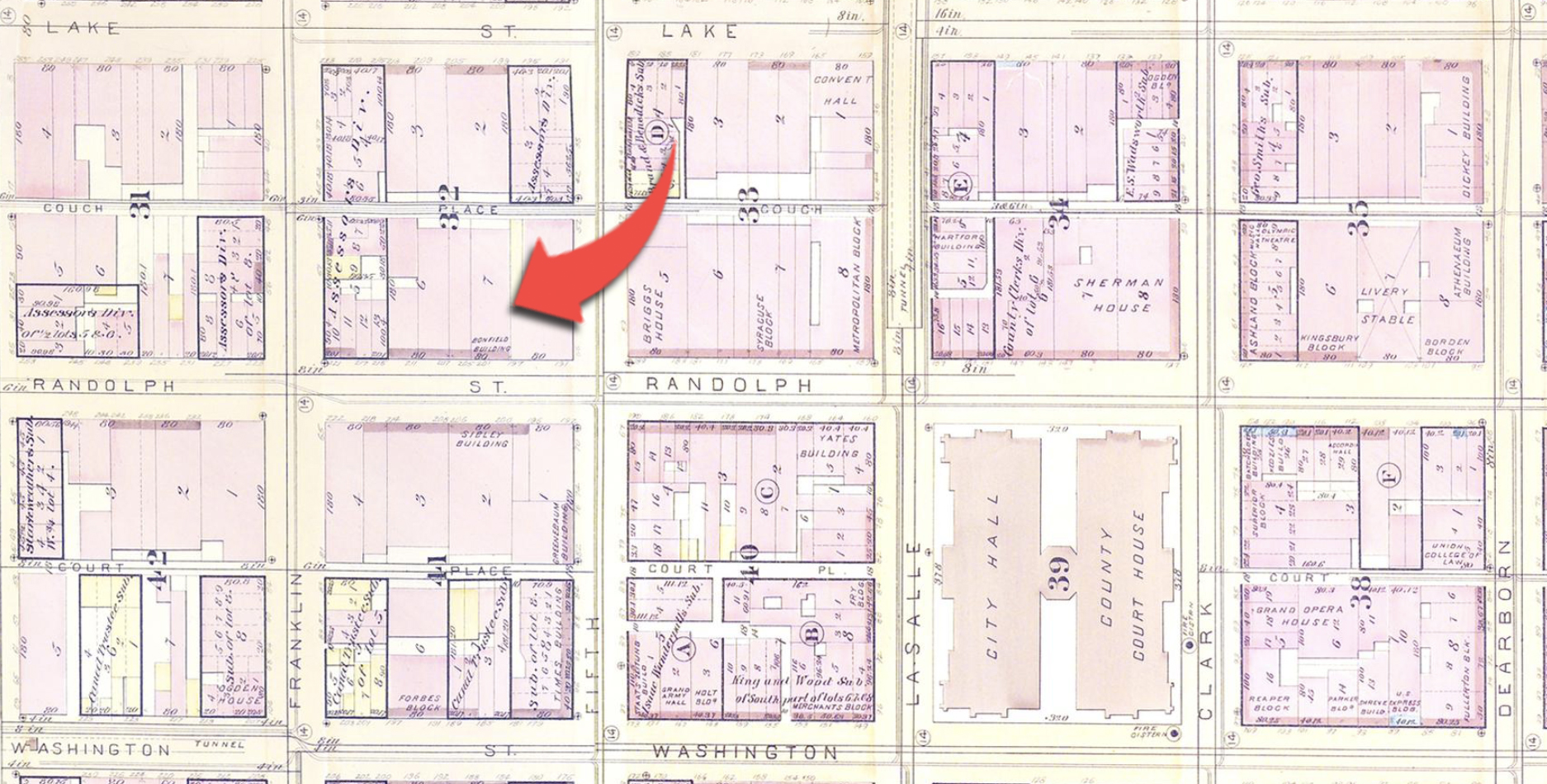