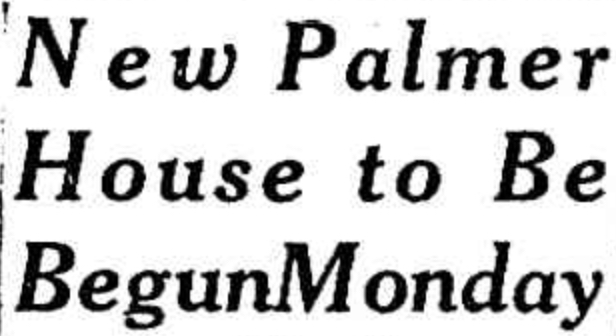 BY AL CHASE
Work starts Monday on the $20,000,000, twenty-three story Palmner house, to be the world’s largest hotel—with 2,268 rooms and 2,268 baths. This is sixty-eight rooms more than the Pennsylvania, in New York, at present the largest hostelry. There are several others much contemplated but work hasn’t started yet on any or them.

Wreckers will begin on the Wabash avenue section of the old hostelry and a complete twenty-three story hotel will be erected without interfering In any way with the western section of the present buIlding. As soon as the first unit is completed the State section will be torn down. It is to have the entire building in by Aug. 1, 1928. The Thompson-Statrrett company, which has the general contract, states that the new Palmer will be erected the Landia award ruling. 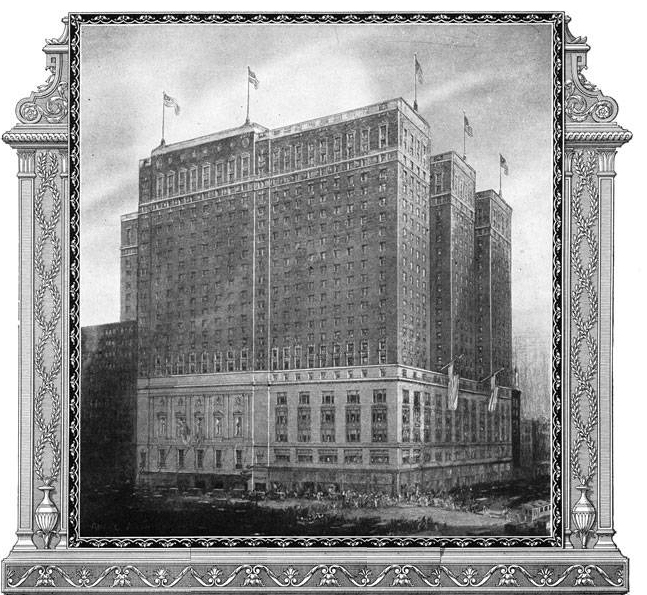 Floor for Women.
A feature new to Chicago will be the provision made for women travelers. The fifteenth floor will be devoted exclusively to feminine guests and in addition to sleeping rooms will have a beauty parlor, reception room; library, and writing room, etc.

Another unique feature, it is claimed, is the plan to have stores on the first five floors of the entire State street frontage. A block long flrst arcade will run from State to Wabash. Connecting with it at right angles wlll be a half block long wider arcade extending from the hotel’s principal entrance on Monroe.

The main lobby, offices, and the principal dining room will be on the second floor. The fourth floor will be devoted to two great banquet rooms, with kitchen between. All of the main kitchens will be on the Wabash avenue side. A large lunch counter and grill will be in the basement.

Long a Landmark.
The first Palmer, built by Potter Palmer, was at the northwest corner of State and Quincy and con. 225 rooms. It was wiped out by the great tire. The present hotel was opened in 1873, and with its 700 rooms and imposing architecture was considered one of the country’s greatest structures. Its fame as a hotel gradually spread all over the world. The new hotel will be owned and operated by Honore and Potter Palmer, trustees of the Palmer estate.

The Palmer house statistician has made some flippant but interesting observations IllustraUng the huge size of the new hotel. For instance, a restless guest who insisted on changing his room every morning would be more than six years older when he left than the day he registered. if he tried every room.

If a 21 year old guest who Is a firm believer in the Saturday night rite bathed each week in one of the 2,268 tubs, he’d be 64 years old when he checked out. 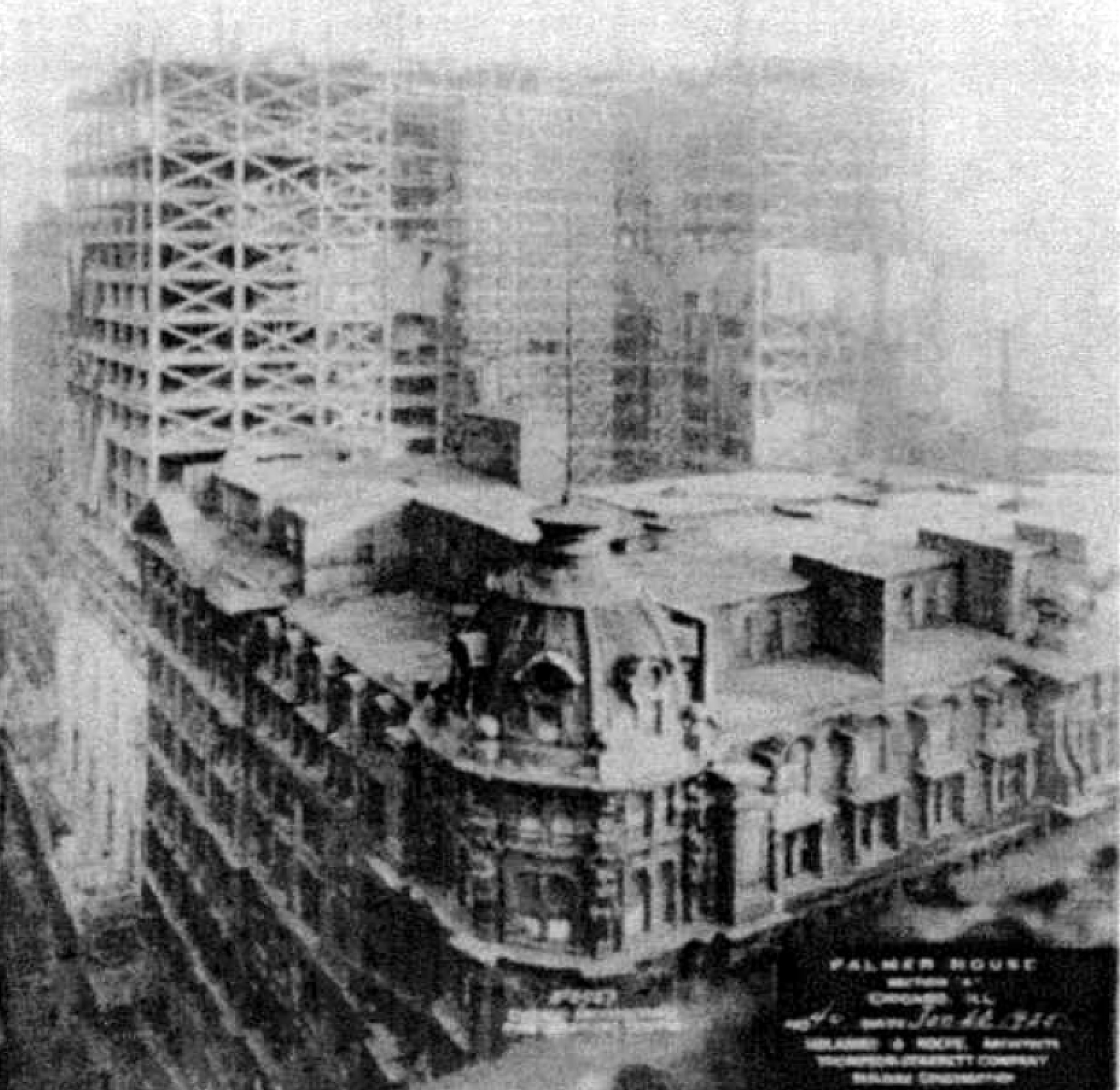 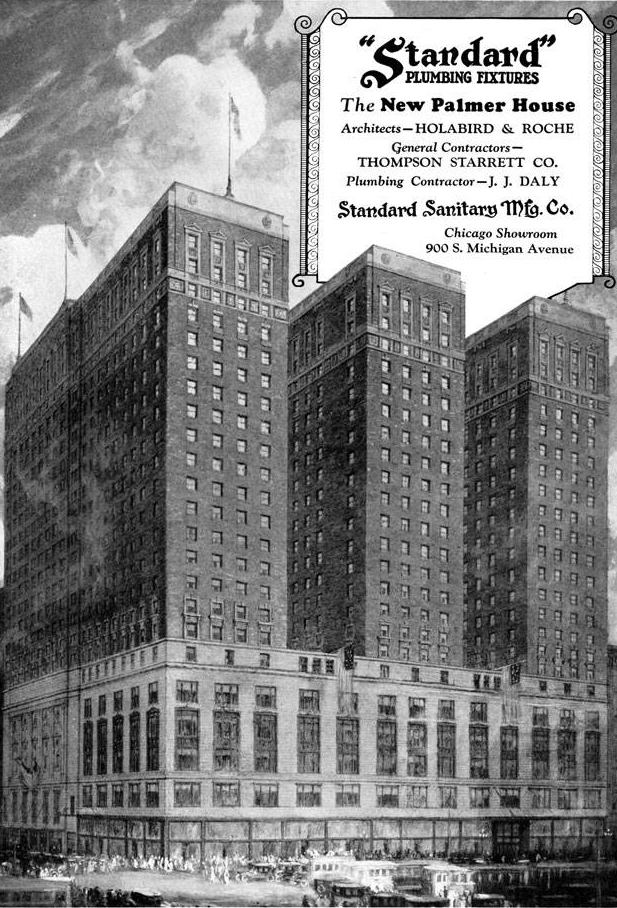 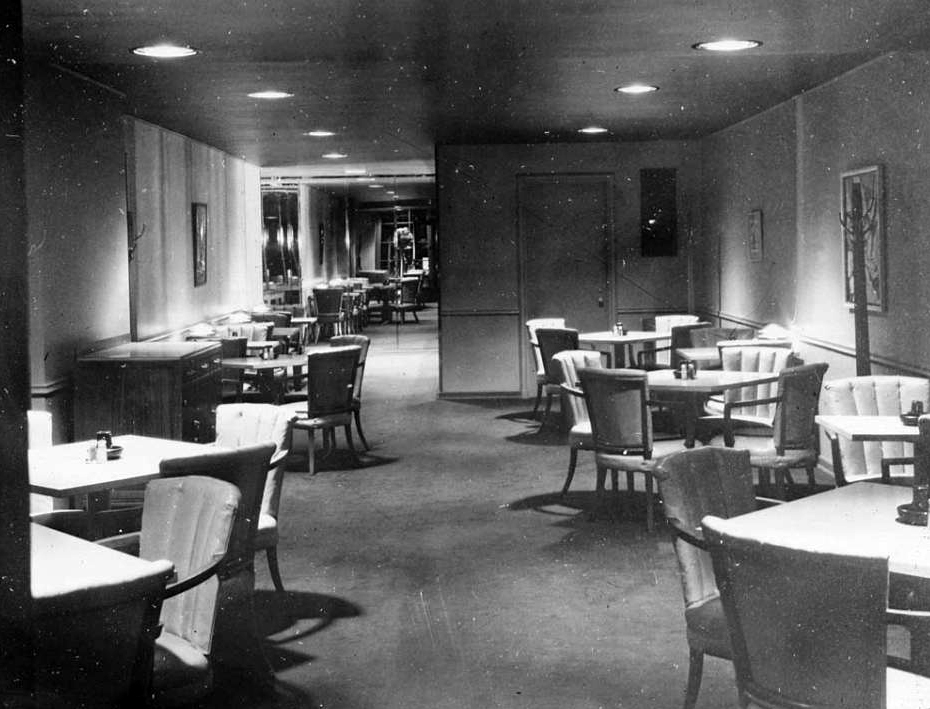 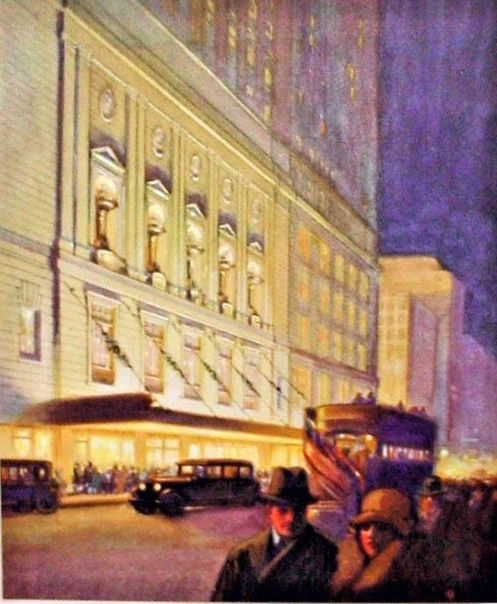 With Potter Palmer Jr. officiating, the cornerstone for the new Palmer House, State and Monroe streets, was laid yesterday morning. Mr. Palmer, son iof the original owner of the old Palmer house, Chicago’s most famous hotel, put into the hollow of the stone one of the silver dollars that studded the barber shop floor in the old days of the hotel. The original Palmer house was destroyed by the Chicago fire. Another was built in 1874 which contained 700 rooms. The new building will have 2,268 rooms. Its main lobby will be the largest in the country, 120 by 85 feet. 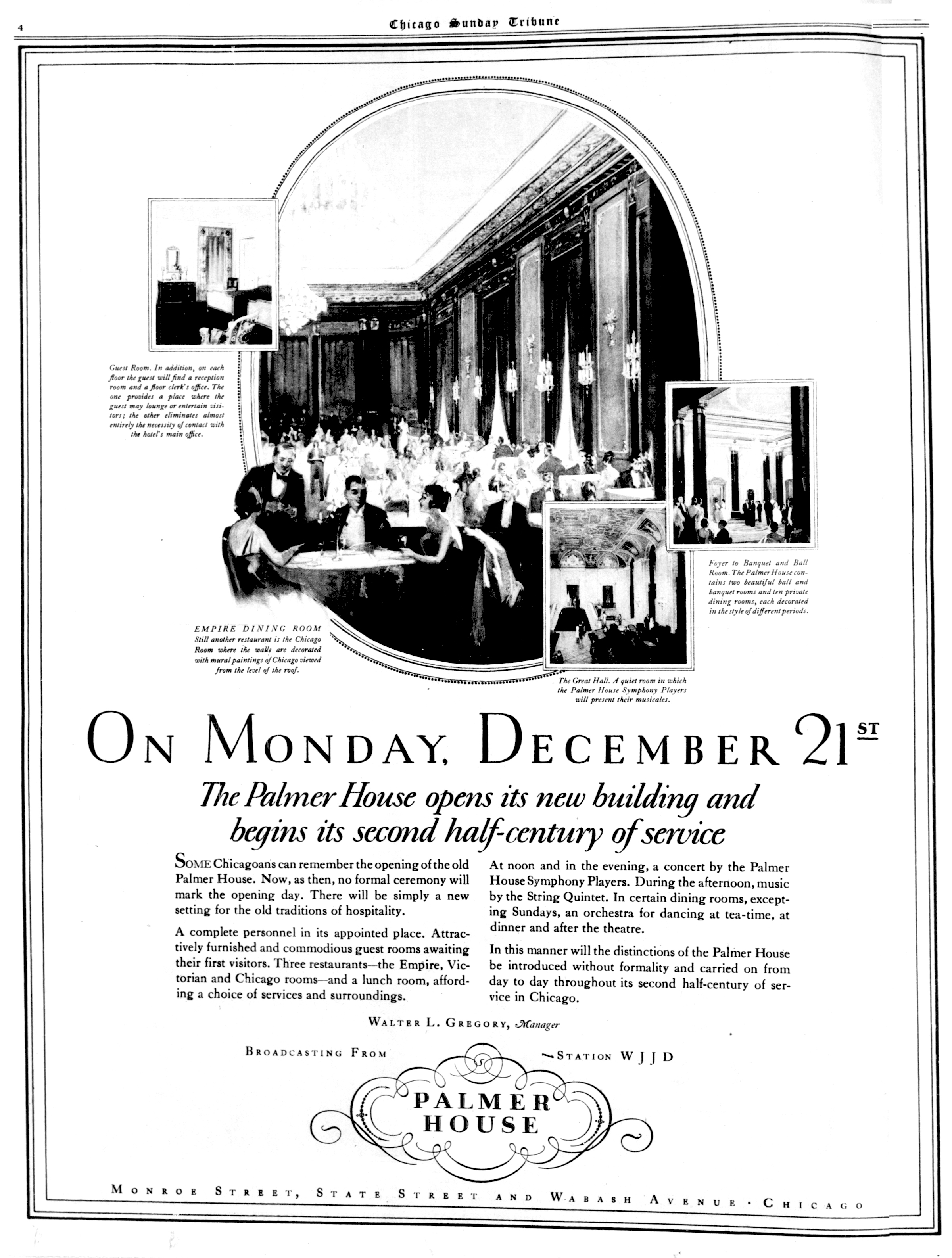 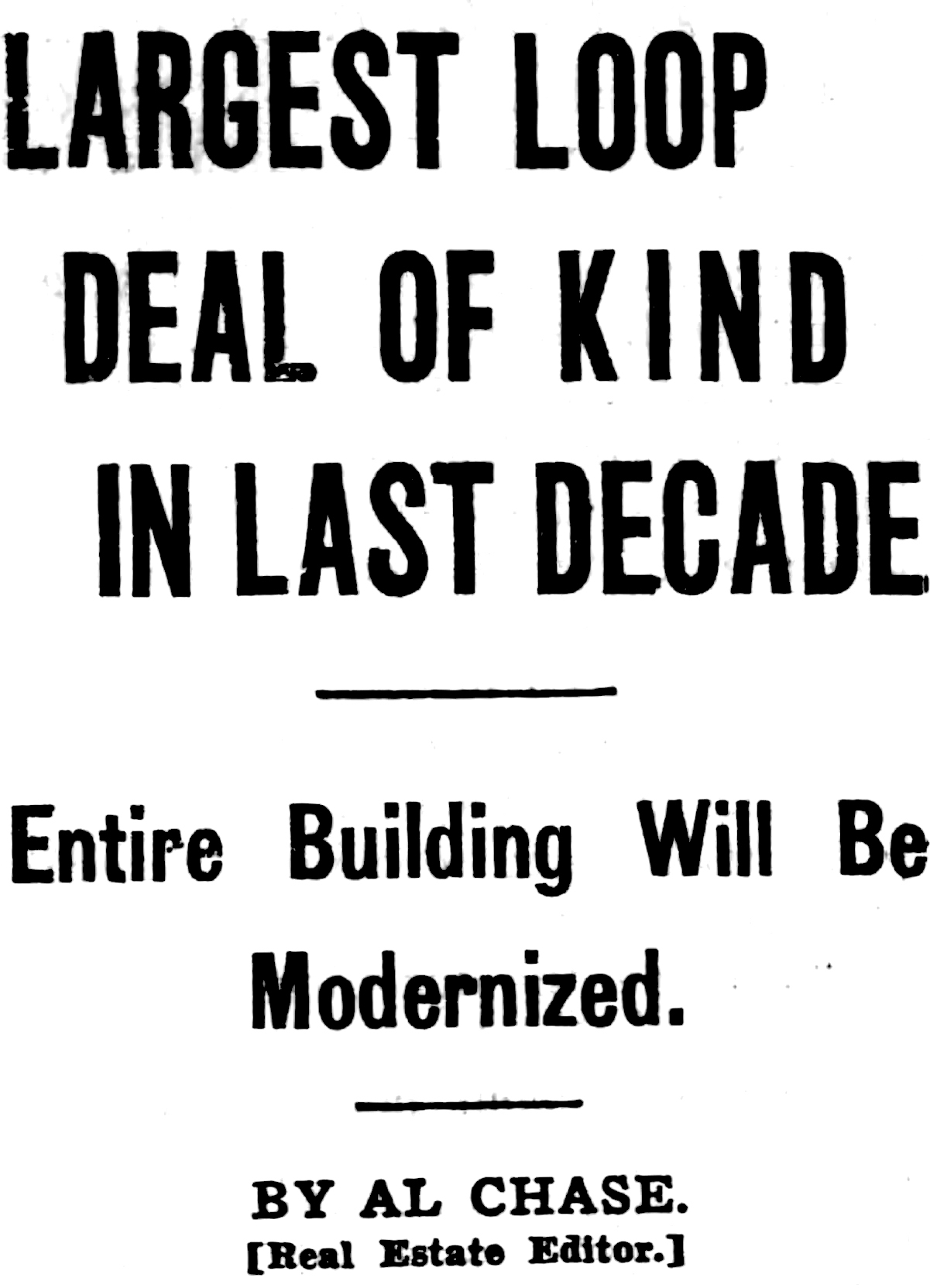 One of the largest leases negotiated during the last decade was signed yesterday when the Palmer House company rented for a term of years the entire 25-story garage property at 20-40 Quincy street. The lessor is the Quincy Parking Garage, Inc., controlled by the Reconstruction Finance corporation. The length of time and terms of the lease were not disclosed but it is on a minimum guarantee basis, plus a percentage of gross profits, including sale of storage space, gasoline, oil, repairs and accessories.

The Palmer House company took possession of the property, which comprises Chicago’s largest garage. The hotel will operate it as a public garage, with direct and in direct and improved facilities for parking service to guests and patrons of the Palmer House, its shops, and restaurants.

According to Robert B. Witwer, real estate agent of the Palmer house, who negotiated the lease, a considerable expenditure will be made immediately to rehabilitate the premises and improve the mechanical equipment.

The building, which has a frontage of 145 feet on Quincy street, with a depth of 75 feet, was designed by Walter W. Ahlschlager and erected in 1930, at a reported cost of $2,200,000, by the National Parking Garages, Inc., composed of a syndicate of New Yorkers. It was to be one of a nation-wide chain of similar skyscraping garages, all to be operated by mechanical devices and without ramps.1 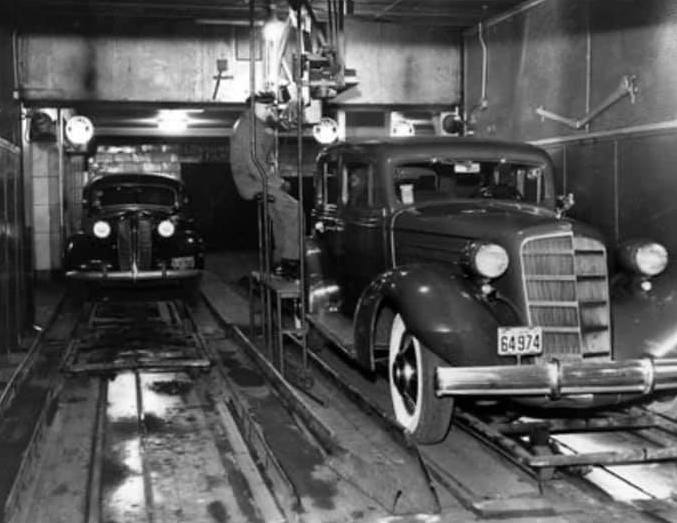 1Postmaster Arthur Lueder is to officiate at the opening on Monday of the twenty-five story electrically operated garage oat 30 Quincy street. This unit, known as the Quincy Parking Unit of the National Parking Garages, Inc., is said to be the largest of its type in the world.

When a car enters the garage for storage it is stopped in front of one of of a series of tracks that head into three huge elevators. Over each of the three elevators is a panel with illuminated buttons indicating the position of parking spaces on each of the twenty-five floors.

The elevator man presses a lever and an automatic “dolly,” similar to the device used to move pianos, runs out on the track under the automobile. An arm on the dolly takes a firm hold on the car and it is lifted up on the elevator to the floor designated. The dolly then takes the car onto the parking floor. The garage has storage space for 1,000 cars.—Chicago Tribune, May 18, 1930