DEARBORN AND LA SALLE STREETS.
No streets in the city have been so changed in appearance during the past year as La Salle and Dearborn streets. The completion of the Bigelow Hotel, and new “Honore Block,” to be built on the northwest corner of Adams and Dearborn, will make a continuous front of new buildings from Monroe street to Jackson.

THE “BIGELOW.”
of which the foundations were laid about a month ago, and upon which the work is now progressing rapidly, will occupy the east half of the block bounded by Adams, Quincy, Dearborn, and Clark streets, having an east frontage of 180 feet on Dearborn street, 110 feet north front on Adams street, and 110 feet south front on Quincy street. It will be four stories in height, to the Mansard roof, in which there will be one story equal in every respect those below it, and one also in the pavilions which rise above the roof. It will have some features rather novel in hotel architecture in this country, but such as are calculated go add greatly to the pleasantness of the house and attract attention and custom.

The first of these is the entrance. This will be twenty-four feet wide and about the same in height, its ceiling coinciding with the second floor above the street floor. This entrance will be paved with marble on a level with the sidewalk, and will afford ingress and egress for both carriages and persons on foot, to a rotunda, thirty-eight feet in diameter, in the centre of the hotel. The rotunda will extend to the roof of the building, where it will be covered with glass. In the centre of the rotunda will be a fountain, around which carriages will drive to find exit by the same way they entered. The entrance to the office, and the foot of the main staircase will be in the rotunda. Balconies will also encircle it at the several floors, and the whole will afford pleasant loitering place for gossippers, which we do not remember to have seen in any American hotel except of the old hotels of New Orleans.

Another novel feature of the “Bigelow” will be a covered passage way, or arcade, which will extend from the centre of the rear wall of the main building to Clark street, and another similar one which will extend along the rear walk of the hotel, having an entrance on each, Adams and Quincy streets. The arcade extending to Clark street will be 125 feet long; and the one extending along the rear of the hotel from Adams to Quincy streets, will be 180 feet long. Each arcade will occupy a strip of ground 75 feet wide, and will be covered with a one-story building 22 feet high, having a glass roof. The interior of these arcades will be divided into 30 or 40 shop or stalls, on either side, with a marble walk 24 feet wide in the centre. The hotel proper will contain 270 rooms, and accommodate 400 guests. Captain Bigelow, the proprietor, estimates the cost of the building, exclusive of the arcades, at $200,000, and expects to have it ready for occupancy by the first of March, 1871.

The New Bigelow Hotel.
This magnificent structure is superbly illustrated in the July issue of that entrerprising and valuable journal, The Land-Owner, now ready, and for sale by S. C. Griggs & Co., McNally & Co., and at The Land-Owner counting-room, Shepard Building, opposite the Post Office. The Land Owner also contains five elegant cartoons, in colors, the first installment of a new glossary of architecture, portraits, park scenes, buildings, maps, etc., making the July number fifty-two pages in size, and rendering it the largest and most valuable serial in the world. Its great success is a marvel in journalism. 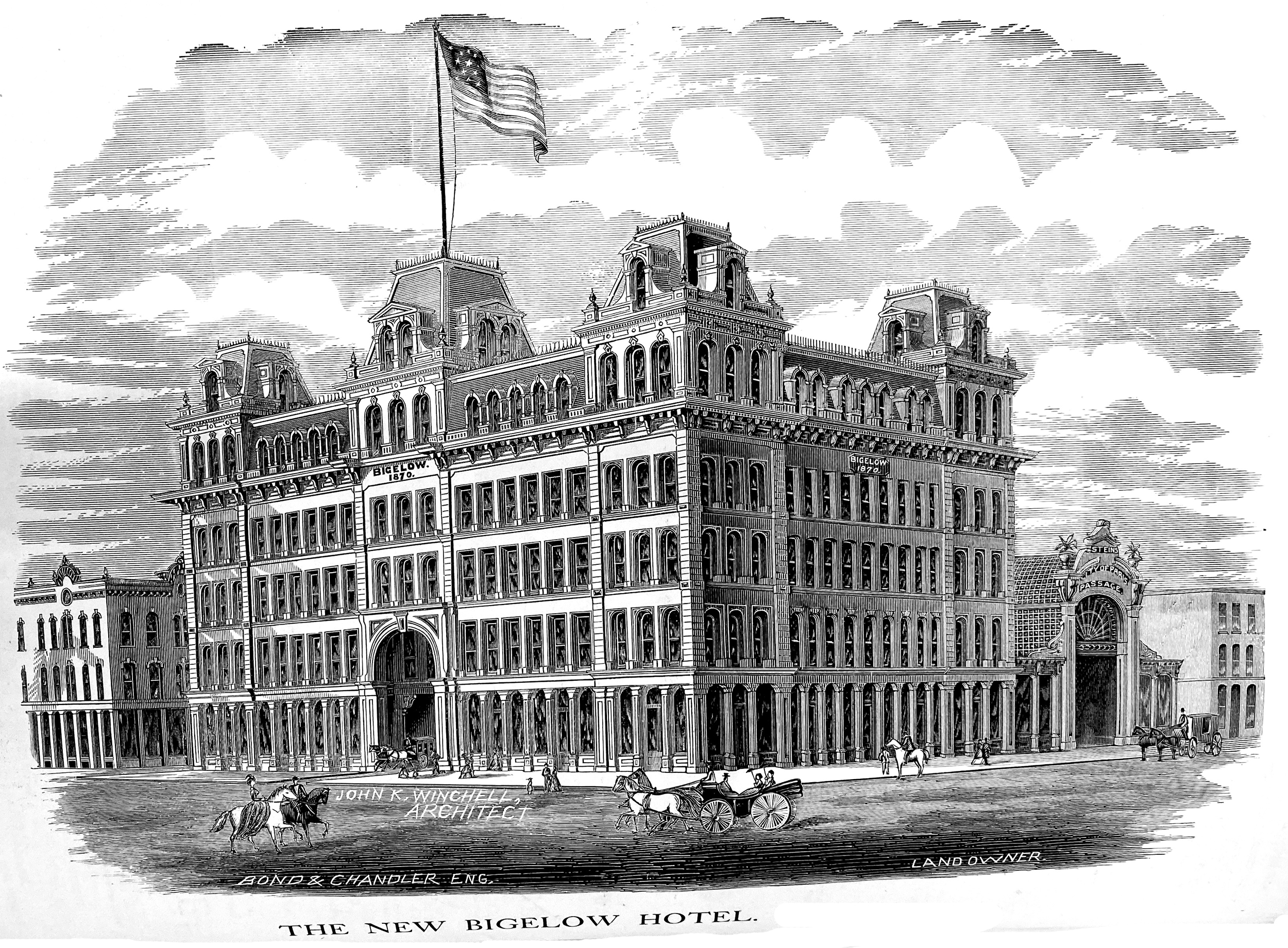 The splendid newly-built hotel known as the Bigelow House will be opened on November 1, under the management of Messrs. Hughes & Skinner. H. H. Hamlin, who during the past fifteen years, has been connected with the Sherman and Tremont Houses, will take the office. The furniture is rapidly arriving. 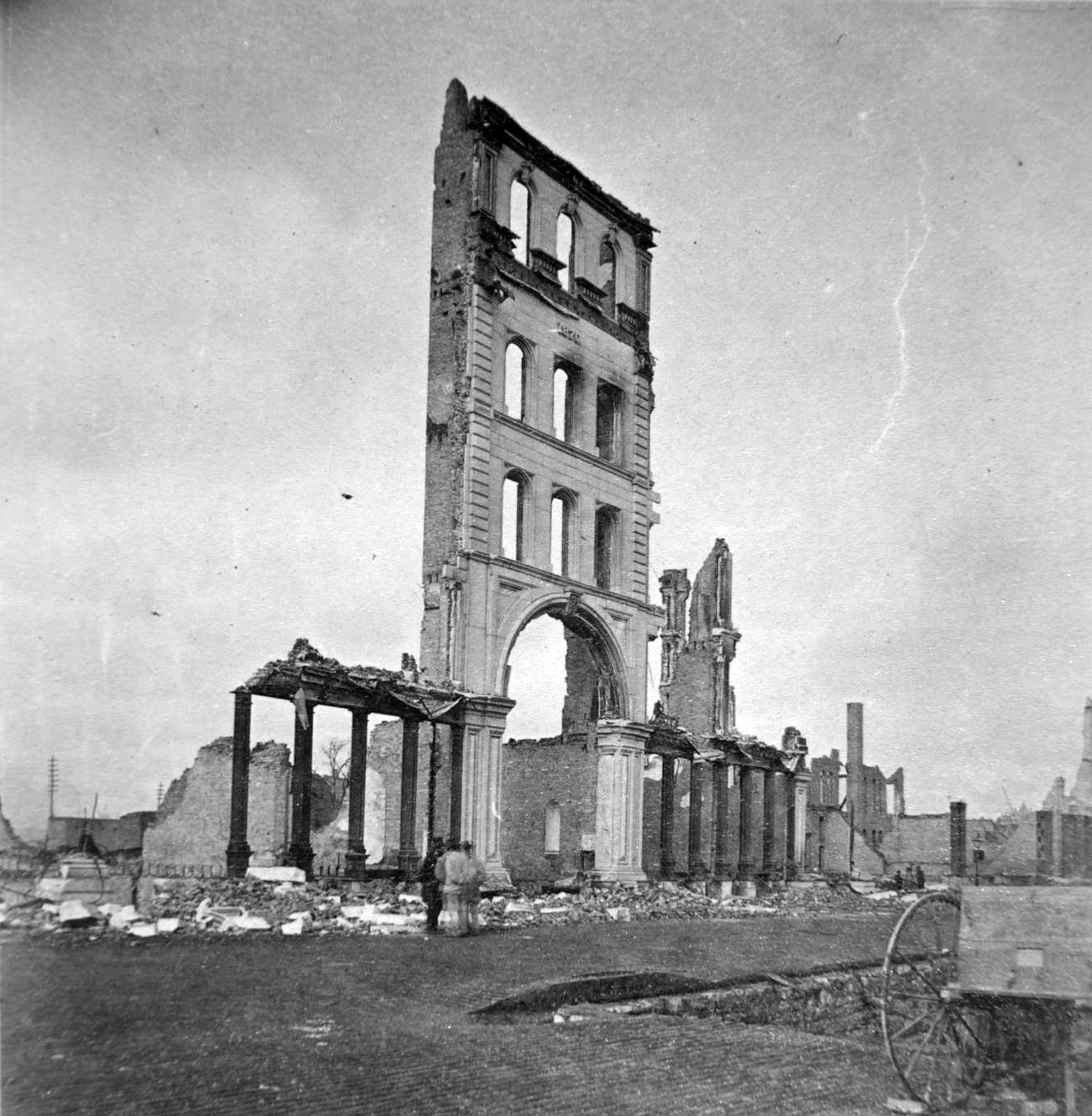 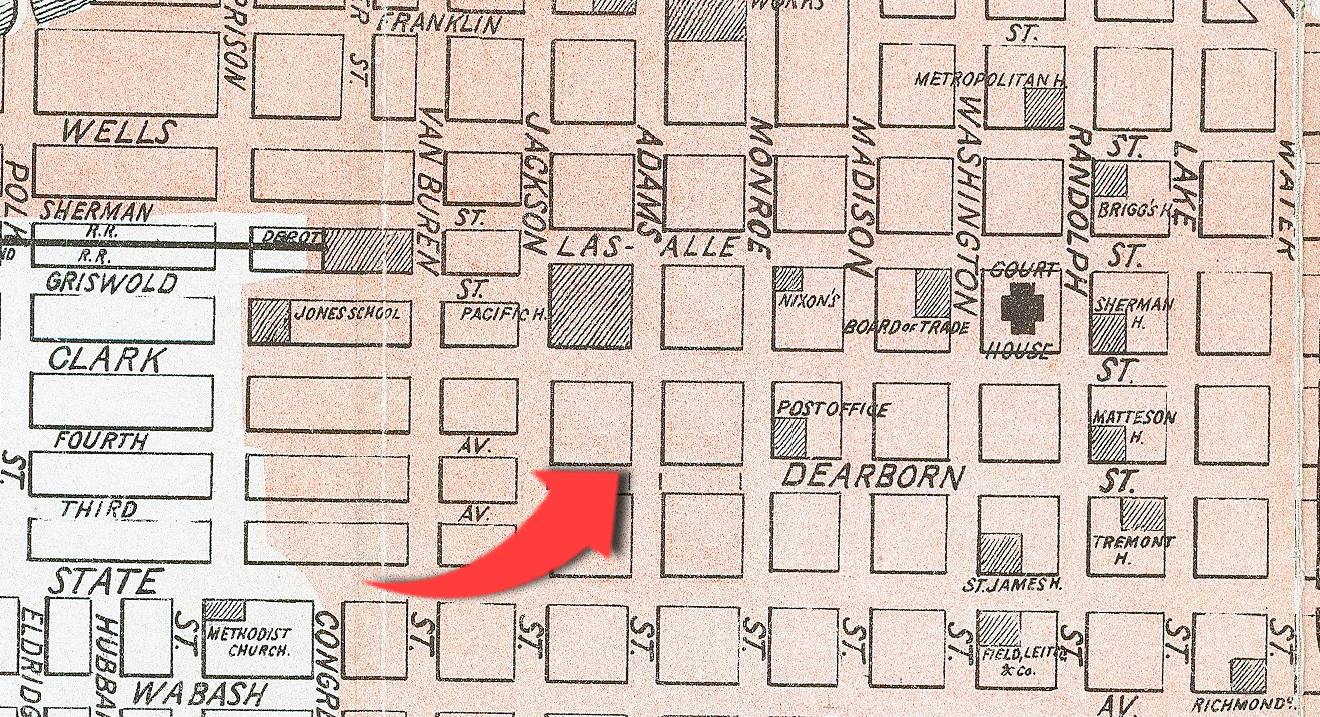 The Bigelow Hotel
SW corner of Adams and Dearborn streets
1871