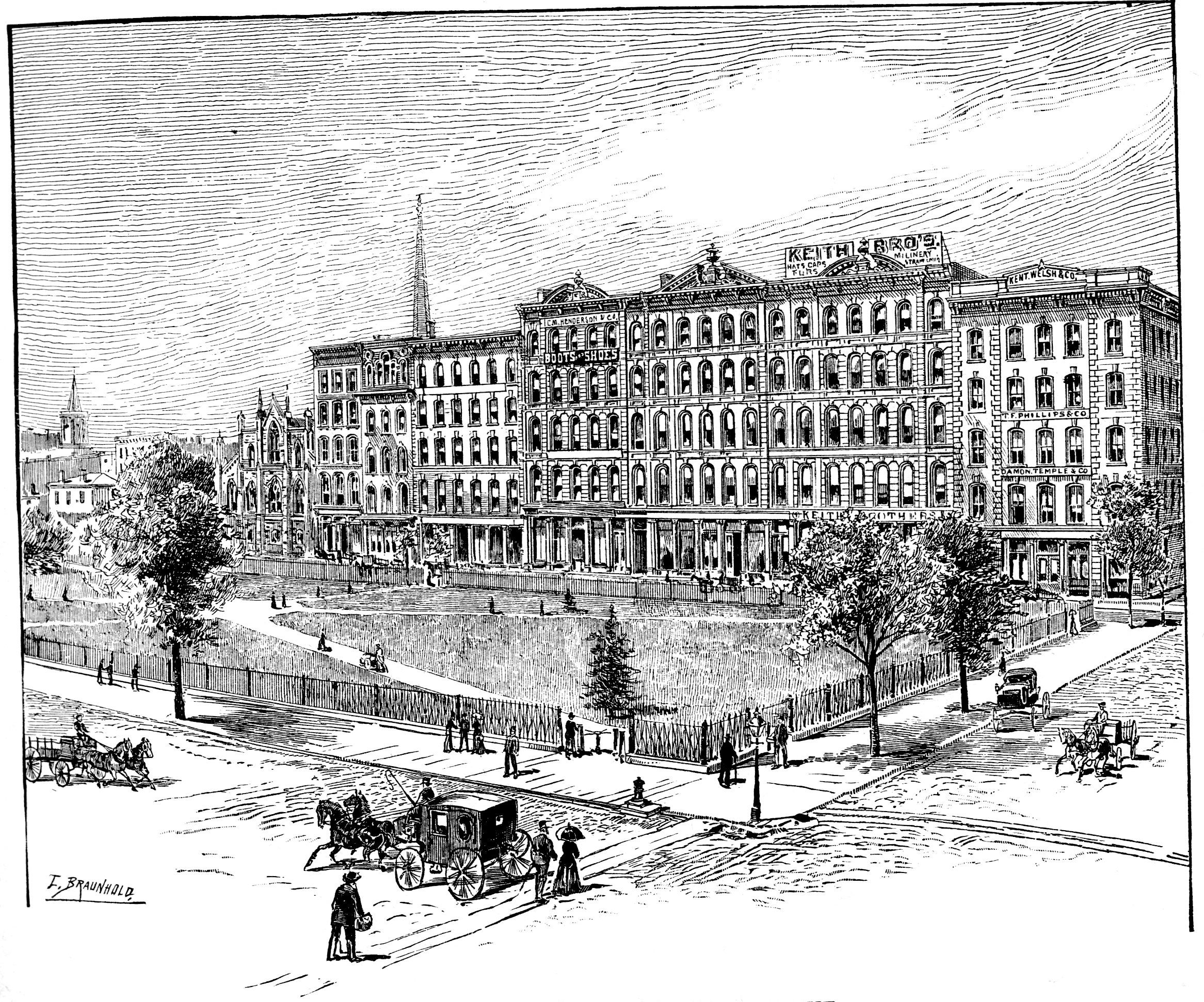 To speak of Chicago’s greatness, present and prospective—to dwell upon her increasing wealth and importance as a commercial metropolis, and utter predictions the grandest as to her future—is to yield to a pardonable weakness, in view of what has been, is, and is to be; but generalilties are be coming tedious and uninteresting from frequent repetition, and to call to mind specific instances now and then is positively refreshing. Our lake, tunnel, water works, stock yards, lumber and grain trade, etc., have each been allotted their respective niches in the temple o Chicago’s greatness, but the stock is by no means exhausted. We have yet an “limitable perspective” in the direction of our management business palaces and wealthy, enterprising business firms—the real underlying principle, the true source of permanent prosperity. Therefore, a few details as to the breadth and extent of the largest business house of the kind in America will prove of no slight interest as bearing upon the general subject.

We refer to the splendid, spacious establishment on Wabash avenue recently taken possession of by these well-known lions in the wholesale hat, cap and millinery trade, Messrs. Keith Brothers, which is one of the oldest of the leading firms of Chicago, having started in 1858 as Keith, Paxson & Co., continuing up to 1864, when the retiracy of Mr. Fazon gave it the name of Keith Brothers, by which the house is now known throughout the West. Commencing with about $75,000, their operations have steadily increased until the business this year amounts to very nearly $1,500,000. For the year 1868 Keith Brothers’ internal revenue returns were $200,000. This marked supremacy over the business of any other house in America has been brought about purely by far-reaching enterprise, based upon sagacious computation. A characteristic of Keith Brothers is the fact that they constantly employ a much larger capital in proportion to their business than is ordinarily devoted to that purpose, holding always a large surplus with which to take advantage of a fluctuating market, and buying always for cash—so that they are not only enabled to buy at the lowest possible prices, but are also able to purchase at the most favorable times. As a natural result they can offer especial advantages in prices, and it is this, together with an invariably complete stock and the well-known integrity of the firm, that accounts for the remarkable prosperity enjoyed by Keith Brothers.

The new quarters of the firm, at Nos. 68 and 70 Wabash, are not excelled in Chicago as to accessibility and splendid location generally, and in point of size by only one establishment,, that of Field, Leiter & Co. The present operations of Keith Brothers occupy five floors, each 153 feet by 50, resides a high basement 195 by 50—all admirably adapted to their business, which us exclusively wholesale. The wide avenue in front and the street in the rear afford ample room for shipping and receiving, while the open park and lake view beyond, besides rendering the outlook unusually pleasant to the visiting merchant, afford him a better light for examining stock than is usually to be had in Chicago.

People in general have but an imperfect idea of the immensity of the hat, cap and millinery trade, and so will be surprised at the fact that the firm of Keith Brothers at no time have less than 3,000 different styles of head wear, all of which can be shown without overhauling a single case, or displacing a package. The cases in which a single class of men’s soil black hats are kept occupy a length of six hundred feet, placed side by side; and no two cases containing the same make or patterns. This does not include the broad brims, the high crowns, the light colors, the “Alpines,” and forty other special shapes, in fur, nor the great variety of wool hats which form so large a staple in the trade. The new and popular style known as the “Alpine” is represented by twenty-seven varieties. The there is a basement full of straw hats and boys’ caps; another floor devoted to exclusively to millinery goods; another to duplicate cases of the stock in the main salesroom; another to unseasonable goods. In all, an acre and a quarter of area, often piled as high as ceilings will allow.

As to variety, the goods of every first-class American manufacturer, together with such European styles as he trade demands, are found upon the shelves. A buyer of the firm visits Europe regularly every year, remaining from November until March, selecting and ordering goods from the best factories of the Old World, and importing many styles of goods to the of any other firm in America. Directly a new stye of head-wear, male of female, makes its appearance in Paris, a “shape” is purchased and forwarded to that firm is constantly in receipt of the very latest styles, and the patterns and materials for the same, which are at once manufactured in headliners for sale, cheaper and better than the made up articles can be imported. Keith Brothers import annually about $100,000 worth of goods, including, for one item, 6,000 dozen Scotch caps from Glasgow. They have in boxes in New York $150,000 worth of new shapes and materials en route from Europe, to replenish their stock for the spring trade, including 3,000 cases of millinery goods, velvets, laces, ribbons, artificial flowers, etc., the freight on which foots up the snug figure of $90,000.

Keith Brothers are enabled to offer the Western merchants and jobbers such an assortment, from which to select, and prices in every case as low, and in some instances lower, than the prevailing New York rates, that they are actually deriving an immense trade from general dealers, jobbers included, who proceed to New York and purchase a portion of their stock, and then return to Chicago and buy pf Keith Brothers their hats, caps and millinery goods, saving the cost of freight invariably. In view of the general outlines above presented, it will not be wondered at that Chicago contains, by far, the largest hat, cap and millinery house in America.