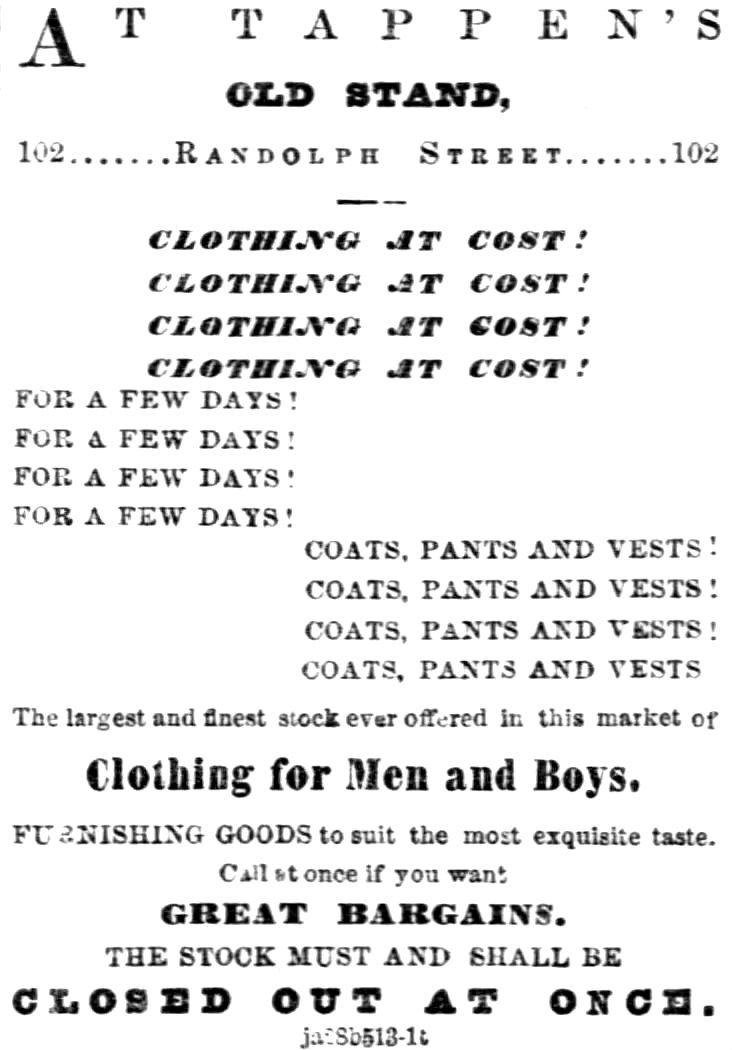 IN NEW QUARTERS—H. H. TAPPEN AT HOME ON RANDOLPH STREET.—The great change which Randolph street, from Clark east to the Lake, has witnessed within two years past, has developed it into a first-class business thoroughfare. It comes nearer being finished to-day than any other street of equal importance in Chicago. It is even with the last high grade, its old business blocks have been raised to grade, many of them, and other fine blocks have been built, and thus Lake st, has lost laurels it will never recover from the portion of Randolph street between State and Clark.

As a consequence, some of the Lake st. houses are seeking a new location, the while with cheaper rents they enjoy better accommodations. The well-known clothing house of Tappen & Bro., now H. H. Tapp, has just taken possession of their elegant new store in the fine iron block on the corner of Randolph and Dearborn, which enjoys a front having probably more passers-by daily than any other in this city.

H. H. Tappen, the senior of the old firm will more than reproduce its past enterprise and the results of the same so satisfactory to their patrons, and has done so in a beautiful store now filling up with one of the choicest stocks of goods ever opened in Chicago, with more coming until if the demands of the most fastidious purchaser, as well as the requirements of every purse be not anticipated fully that case is a hopeless one. The system of One Price, and that plainly marked on the goods secures the most unwary buyer just what he expects, if he can read the figures.

Tappen has fully demonstrated the problem he set out with in Chicago–has won troops of friends, and a “calling acquaintance” of patrons from a wide circle of country tributary to this city, and be “still lives” under better auspices to than ever before to win, where his specifications claimed are low prices for his goods, cheap rates for all grades of stock, together with taste and skill in the manufacture of clothing under his own eye in this city. Give him a call at No. 102 Randolph street, and find that he can fit out an army of laborers and mechanics, array a regiment of well dressed men, and fit out a troop of exquisites, from his counters, and shelves, and benches.

Indiscriminating putting of business houses is to most readers anything but pleasant or profitable reading. But there are instances in which we feel that we feel that we do not impose upon the good nature of our readers, when wares are favorably noticed, and among these is Tappens’ clothing establishment, No. 102 Randolph street.

In calling attention to Mr. Tappen’s card, in another column, we but express the opinion of ninety-nine in every hundred who have paid his house a visit, in stating that those who seek a reliable place to get a good garment, either made to order or ready made, will find no better in Chicago, nor one in which lower prices are charged for good goods. Tappen gives his personal attention to the selection of styles, purchase of goods and their manufacture into garments adapted to the to the wants of his customers, embracing every class of business and working men, for whom he caters especially. Our friends who pay cash, and want their money’s worth, can always get it at Tappen’s.

A New Clothing House.—Messrs. G. T. Belding & Co., late of New York city, have opened a new Clothing House at No. 102 Randolph street, in the five story iron block opposite the Matteson House, late the old stand of Tappen. They are men of energy and bring to this city a capital assortment of goods, freshly selected for this market. 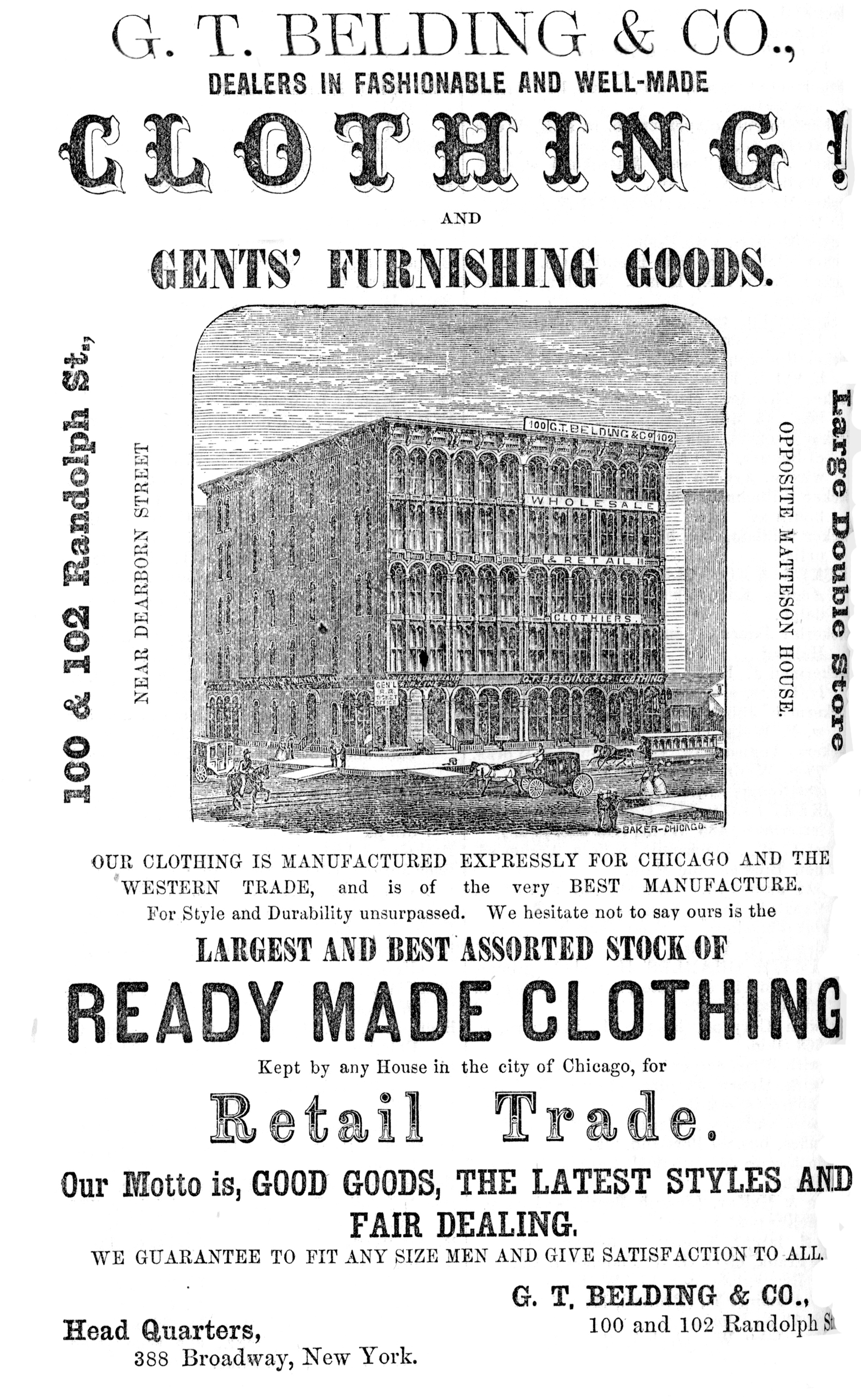 Business Extension,—One of the beet criterions we could have, as to the rapidly increasing commercial greatness of our city, is the behavior of its several tradesmen, «ho almost daily, finding that their accommodations are becoming insufficient to meet their rapidly increasing demands, are enlarging their means of supply. Take an example. G. T. Belding & Co., the proprietors of the fashionable clothing establishment, Nos. 100 and 102, Randolph street, having long felt the great want of room—that their accommodations, however extensive, are not nearly adequate for their large custom, are at last compelled to make important alterations. For a number of years they have faithfully served the public by supplying them with garments of the moat approved style, material and manufacture. Their transactions hare ever been characterized by candor and fair dealing, coupled wlth a thorough knowledge of the business in all its general branches. And they And that their efforts hare been appreciated by the community to such an extensive degree that. their connection has grown from being originally a city one, not only to the adjoining districts, but throughout the whole Northwest.

Wesers. G, T. Belding, & Co. have therefore determined to lease the adjoining store, No. 98 Randolph street. The three splendid marble fronts will be united by forty arches, the whole forming a frontage unrivaled by any other establishment of the kind in the Western States. Their plans as to interior arrangements are of the most elaborate kind, and will be so near perfection as possibly could be. The first floor of No. 98 is intended to be a Boy’s and Youth’s department. The second floor will be elegantly fitted up a an order department, where a choice assortment of French, English and Scotch cloths, fancy and plain coating and vesting, cot and fitted to every conceivable shape, will be kept. To this department C. LaCour, a practical and experienced cutter, will be attached: The other astories will be used for manufacturing purposes.

This building already occupied by this enterprising firm will be thoroughly renovated and replenished with a new and extensive stock of all the latest styles and patterns of men’s clothing and furnishing goods. Messrs. Belding & Co. guarantee for the future a continuation of the candid and business like behavior which has ever so characterized them; it will be their constant aim to posses experienced and gentlemanly salesmen; and to do all in their power to meet the wants of their numerous patrons. Knowing the character of the firm and appreciating its effort, we predict a great rush to their new establishment, Nos, 98, 100 and 102 Randolph street, opposite the Matteson House. 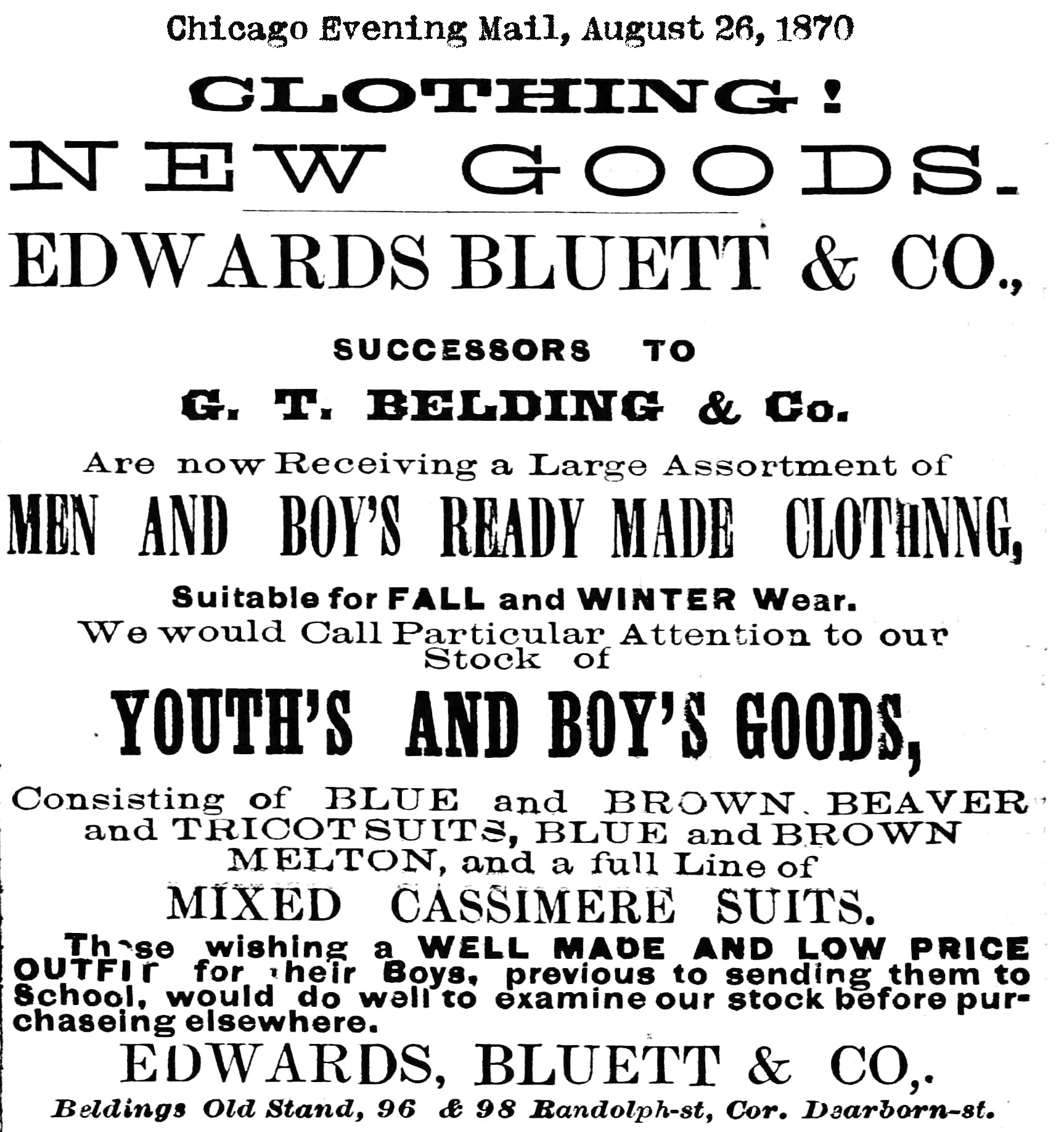 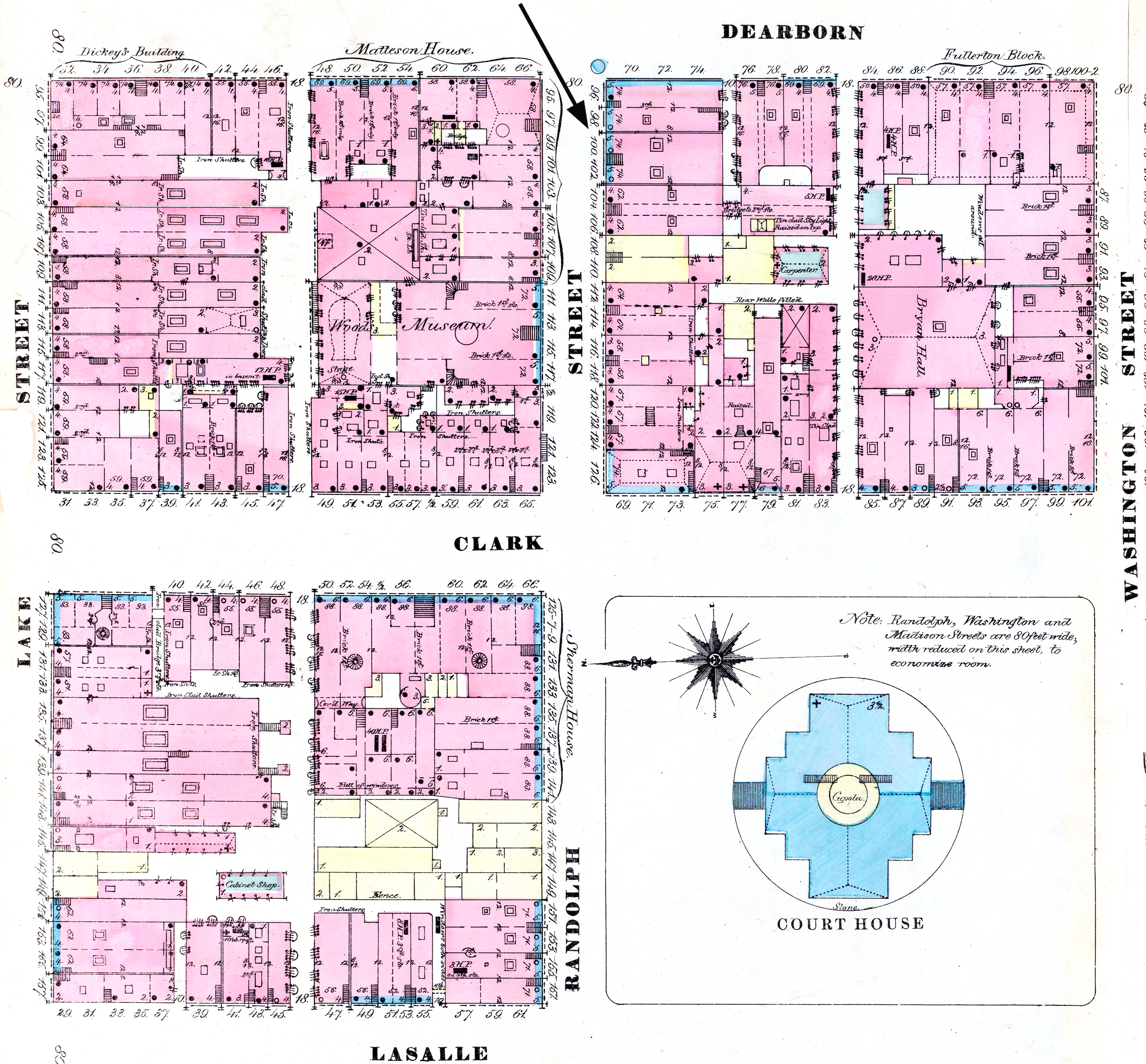