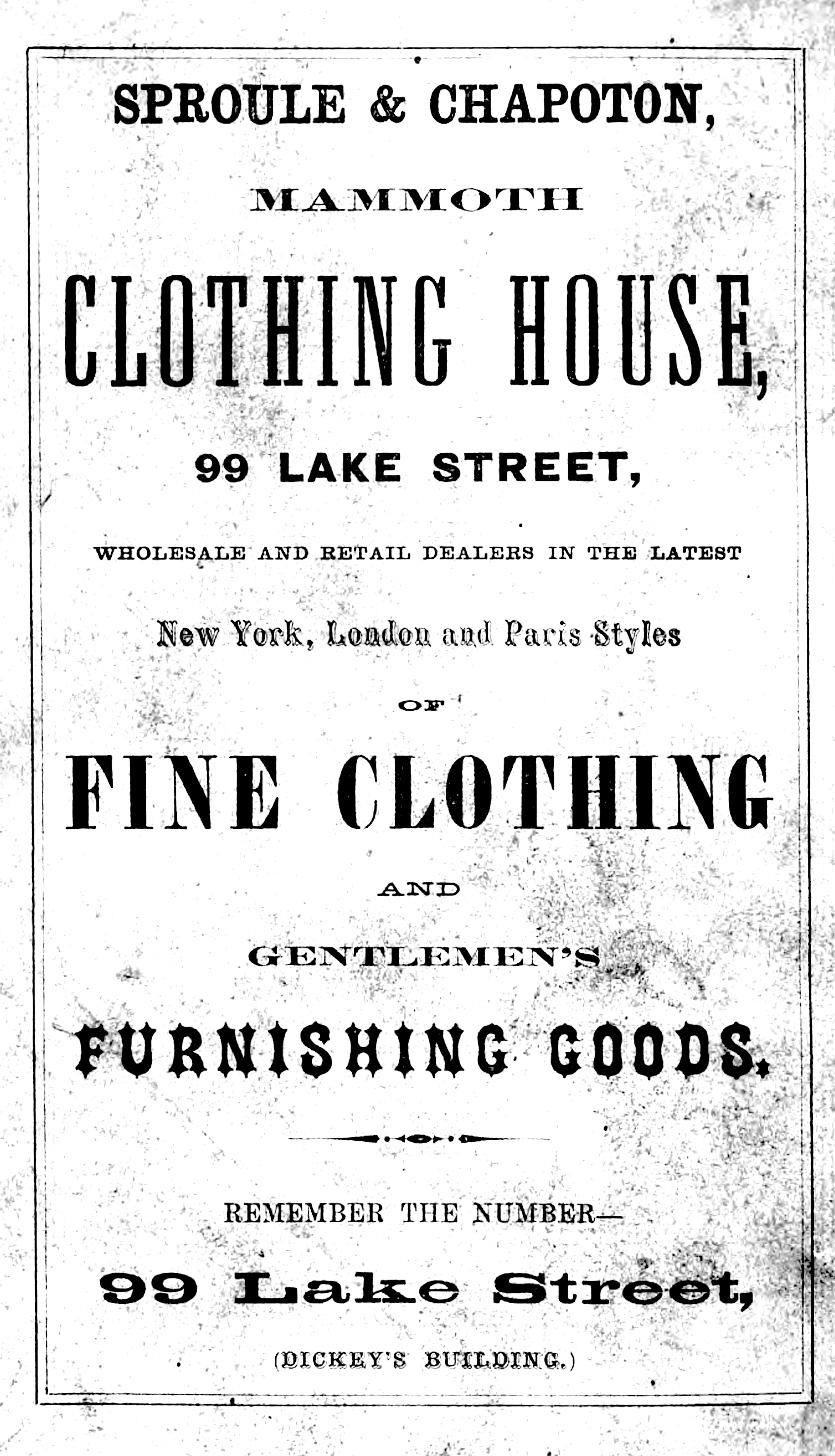 Judge Dickey’s Street Improvement—Sproule & Chapoton.—No part of our city has improved more strikingly than the entire north front of of the block between Randolph and Lake street. The improvement has indeed swept round the block on all its sides within a year, but the Lake street side presents an unbroken business block of handsome stores, now the very cream of our business centre.

Judge Dickey’s new building do great credit to the architect and builders, and are filling with first-class tenants. In the banking office on the corner opposite the Tremont House the Merchants Loan and Trust Co. are soon to take possession, and overhead are to be the railroad offices of the Chicago & Rock Island R.R. At No. 99 Lake street, Messrs. Sproule & Chapoton, a well known and leading Clothing house have just opened their elegant new store, one of the handsomest in the city. They fill four flors with their goods in every department of the Clothing and Furnishing trade. Mr. Chapoton, the resident partner, was one of the first to open here a stock of fine ready made goods. He made the experiment believing that it would pay, and it has paid, in building him up an excellent reputation. It is the aim and claim of this house to suit every taste and every purse.

Their own manufacturers, they are prompt in securing fresh and desirable styles. In Furnishing Goods they have an assortment one of the finest ever offered here and complete throughout. The store has only been open a few days and yet hundreds have visited it. A few months since, that site was occupied by a poor old frame structure, worth scarcely more than one of the plate glass windows of its successor. Now a stop worthy of Broadway itself stands in a row of similar stores extending from street to street, We davise our readers to look in at such a store as Chapoton’s to realize the full extent of the change.

Our Railroad Offices.
The importance of Chicago as a railroad point is abundantly and notably recognized by the prominence secured by the representatives of the numerous companies, to their offices, for which nobe but central and first-class locations are accepted.

Dearborn street, with few exceptions, became the chosen locality, where, within two blocks distance, are our railroad offices. Some of these are long standing. The Michigan Southern, and Pittsburgh, Fort Wayne & Chicago, have become landmarks on their respective opposite corners of Randolph and Dearborn streets. Just a few doors south of the latter office are the Chicago headquarters of the Grand Trunk Railway of Canada. These are well known, and some time since established.

North of Randolph, on Dearborn street, in Walker’s Marble Block, is the New York and Erie Railroad office, and the Michigan Southern freight office. These, also, are not of recent date.

Some changes have been made which deserve to be noted. The Chicago & Rock Island R. R. Company have come out strongly upon Dearborn street, and into possession of one of the finest suites of railroad offices in the entire country. They occupy the entire second floor of Dickey’s Building, on the corner of Lake and Dearborn streets, opposite the Tremont House—a notable suit of apartments, certainly unsurpassed in Chicago. The entrance is from Dearborn street—a wide archway—the passage at the head of a short flight of stairs, opening to the right and left through entrances at this season closed with storm doors. These two stairways lead to the front and rear of the building. On this second floor, which the height of the fine basements almost renders a third floor, the Rock Island Company’s offices extend from the Lake street front, along the entire front on Dearborn street, in all eight rooms.

In the No. 1 on the corner, commanding a fine outlook on the best business part of our city is the office of the President, Henry Farnam, Esq. The Auditor, Francis Bradley, occupies a room adjoining. Nos. 2 and 3 constitute the Cashier’s Department, under the charge of F. D. Sherman. Nos. 4 and 5 are the quarters of Superintendent J. F. Tracy. The General Freight and Ticket Departments are combined and occupy Nos. 6, 7 and 8, under the charge of W. L. St. John.

These offices throughout are in the best style as regards their appointments and arrangement, and we congratulate the Chicago & Rock Island Company on their new home.

On the main floor of Dickey’s Building, opposite the Tremont, are the new quarters of the St. Louis, Alton & Chicago, of which Superintendent Moore and Joseph Price, Esq., the Treasurer, with the assistants in their respective departments, were taking possession of yesterday. It was built for a large banking office, and has been divided by partitions to suit the uses of this company.

The Michigan Central Railroad Company’s up-town ofice was for years a feature of the old corner of Lake and Dearborn streets. The wooden structure has been replaced by the noble building above referred to. The Michigan Central are now taking possession of the fine corner store under the Tremont House, where the familiar face of Capt. Spaulding, the General Ticket Agent, will be restored to the corner of Lake and Dearborn streets. George C. Drew of the Freight Department of the same Company has an office connecting, on the Dearborn street front.

On the opposite corner, in the fine basement of Dickey’s Building, the Great Western Railway Company of Canada have opened their new Freight Agency, their interests in this city being represented by A. Wallingford, Esq., a new comer, but from experience and precedent an acquisition to the number of our railroad men, and to tye interests of this prominent thoroughfare.

Dickey’s Building
Map of the Business Portion of Chicago
1862

Opening of the New Rooms in Dickey’s Building
The Chicago Mercantile Association met last evening in their new rooms, located in the third story of Dickey’s building, opposite the Tremont House. This was the opening meeting, and was appropriately observed by the Association. The meeting was largely attended. The suite of rooms are those formerly occupied by the Dearborn Club, being two large rooms connected by sliding doors, the hall then thrown into one room, occupying the full depth of the block, hence is well lighted and ventilated, having two large windows at the front rear; lighted up at night by four chandeliers and six side burners. In securing these rooms, so centrally located and well adapted for the uses of the Association, the Committee—Messrs. Allen, King, Hibbard and Drake—have been very fortunate, and the members of the Association expressed themselves more than satisfied. The rooms are handsomely finished and furnished. 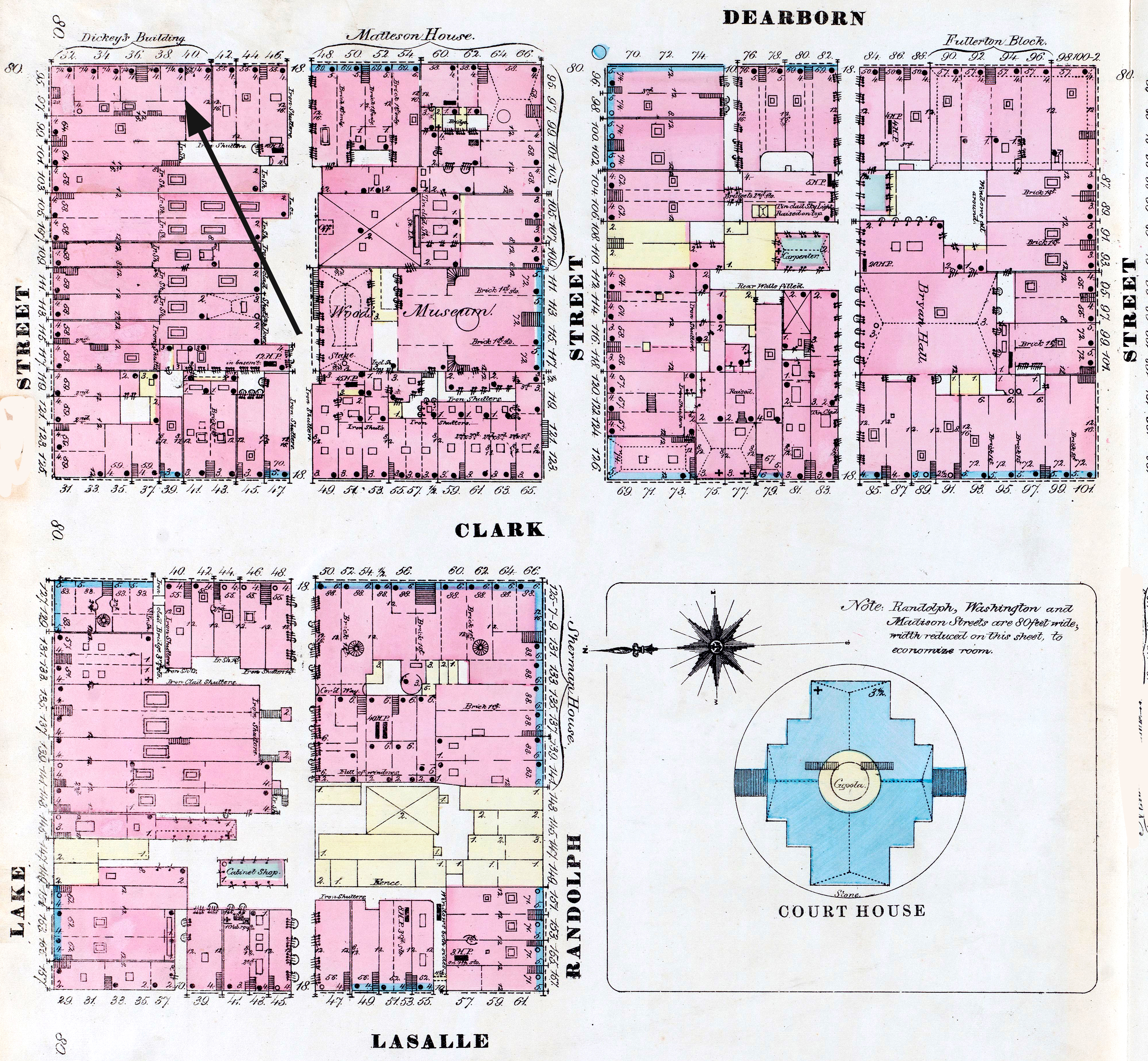