History of Chicago; Its Commercial and Manufacturing Interests and Industry, By I.D. Guyer, 1862

Machinery Depot.—This, of all the ages, is the most remarkable for new inventions. Old industrial methods, and the rude tools of handicraft, are passing away, and new processes, original devices and curious machines that have no sweat upon their brows, are taking the place of the toiling, perspiring workers of the past ages, or are putting the hand- workers into the position of the head-workers, and making them guides, overseers and thinkers. It is the mission of man to hold the earth and its waters in subjection by machinery. By machinery he is destined to lighten the drudgery which at the dawn of creation fell upon his race. To accomplish this, he has been endowed with genius and inventive power; and where the force of a thousand giants would be fruitless, these triumphantly prevail. We are living in a wonderful age. Truly, the race of invention is the race of progress. Our own country is contributing her full share to this material progress of the race, and the hope begins to dawn, that we shall be able to obviate the sternest difficulties the genius of invention has had to contend with. Our own City of Chicago, too, is contributing her full share to the mechanical arts. Here we have inventive geniuses, who are scattering their rich gifts among us, multiplying luxuries and creating innumerable comforts. Here, also, we have business firms, whose enterprise prompts them to search out every valuable invention and offer them to the public. Among such firms we would refer to Messrs. Walworth, Hubbard & Co., who are the manufacturers of Steam Engines, Gas Fittings, and everything pertaining to Steam and Gas they make a speciality; and whatever there is of the production of inventive skill, and of utility, pertaining to these two branches of manufacture, will be found at this establishment.

Who shall dare say that the Steam Engine is perfected? Every day produces some new improvement in this potent Motive Power. One hundred and twenty years before the Christian era, a wheel driven by steam revolved in the Egyptian Capital. More than nineteen centuries succeeded, making their deep furrows upon the broad face of creation, before this whirling toy ripened into the mighty Steam Engine, now so familiar to our race. At the end of the eighteenth century, this power appeared and assumed a form which enabled it to drag heavy burdens upon land and sea; and then the globe seemed contracted to half its former size. In strength, it was mightier than any moving thing, and in speed it rivaled the birds of heaven. It has become the strong carrier and the fleet racer. Its unearthly shriek troubles the air, and its rolling tramp shakes the earth. It impels huge ships, that spread our commerce over every ocean; defying the hurricane and mastering the storm. It digs the ore, blows the wields the furnace, and turns the It toils in the spindle. workshops, heavy hammer, it toils in mid-ocean, and it toils as it bounds along upon its iron track. Its years have been few; but in this short period of time, it has stamped new and everlasting characters upon the history of mankind. Human speculation fails adequately to estimate its influence upon the social and commercial relations of men and of nations. The end to its improvements and appliances is not yet.

Every new improvement, every floating fragmentary idea on the subject, is sought for and crystalized by Messrs. “Walworth, Hubbard & Co., for the benefit of the people of the North-West. 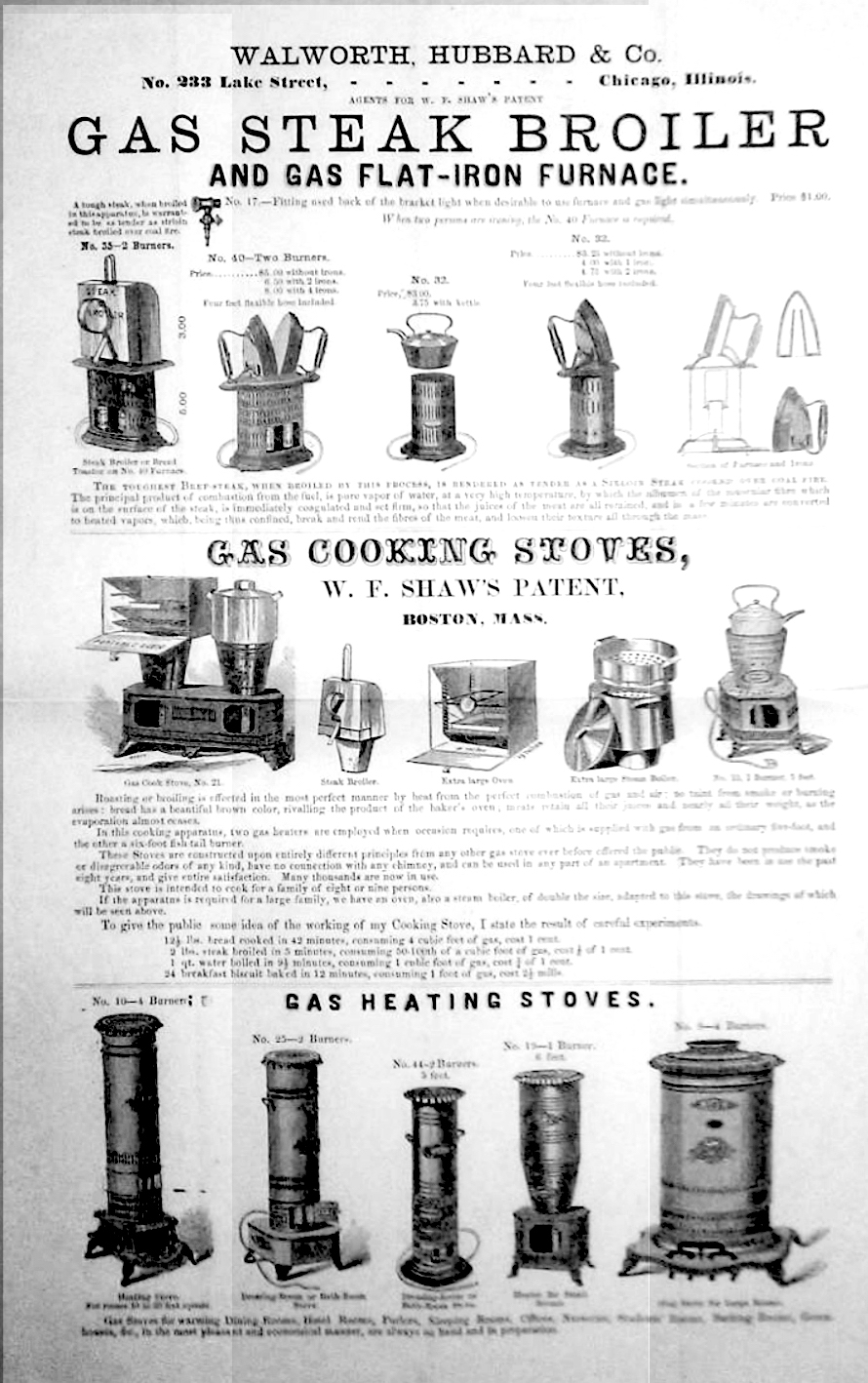 They are agents for Worthington’s Steam Pumps—Ashcroft’s Low Water Detector—Campbell, Whittier & Co.’s Steam Engines; also those manufactured by Mr. George H. Corliss, of Providence, Rhode Island, etc., etc. Perhaps no improvements have been made which correspond in extent, or value with those of Corliss. His improvements are two-fold; first, a peculiar device for moving each steam and each exhaust valve, with a distinct and independent motion, by means of a crank-wrist. There being a series of crank-wrists attached to a common disc, secured to a work-shaft, connecting with the main eccentric, all the valves are moved at the right times and with complete effect. This saves much power that is injuriously expended in the common engine, in moving the closed valve, and prevents the waste of the expansive force of steam. The second improvement consists in a perfect automatic regulation of steam in its passage into the cylinder; so that by means of a cut-off at the steam-valves the entire expansive or motive power of steam is saved, and applied directly to the machinery.

There is a most delicate sensibility displayed in the action of all portions of the machinery, through the agency of stops or cams, with the catches that liberate the steam valves, for the purpose of cutting off the flow of steam into the cylinder; which makes the observer, who understands the operation of machinery, feel that he is in the presence, not only of a high mechanical power, but of a moral and intellectual one since no volition of the clearest intellect could will a more even, sensitive, self-adjusting, equalized, and perfectly-balanced operation. The saving effected by these improvements in fuel alone, is so great as to interest the entire public in the universal introduction of it. They have recently placed one of these engines in the Sherman House.

Within a few weeks past several cases in this city have come under the notice of physicians where persons have been poisoned from using the water which has been allowed to remain overnight in the pipes attached to hydrants. If galvanized iron pipe were used, such as Walworth, Hubbard and Co. manufacture, it would not only effect a great saving in a pecuniary way, but the health of the citizens would not suffer from the injurious matter which collects in leaden pipes. 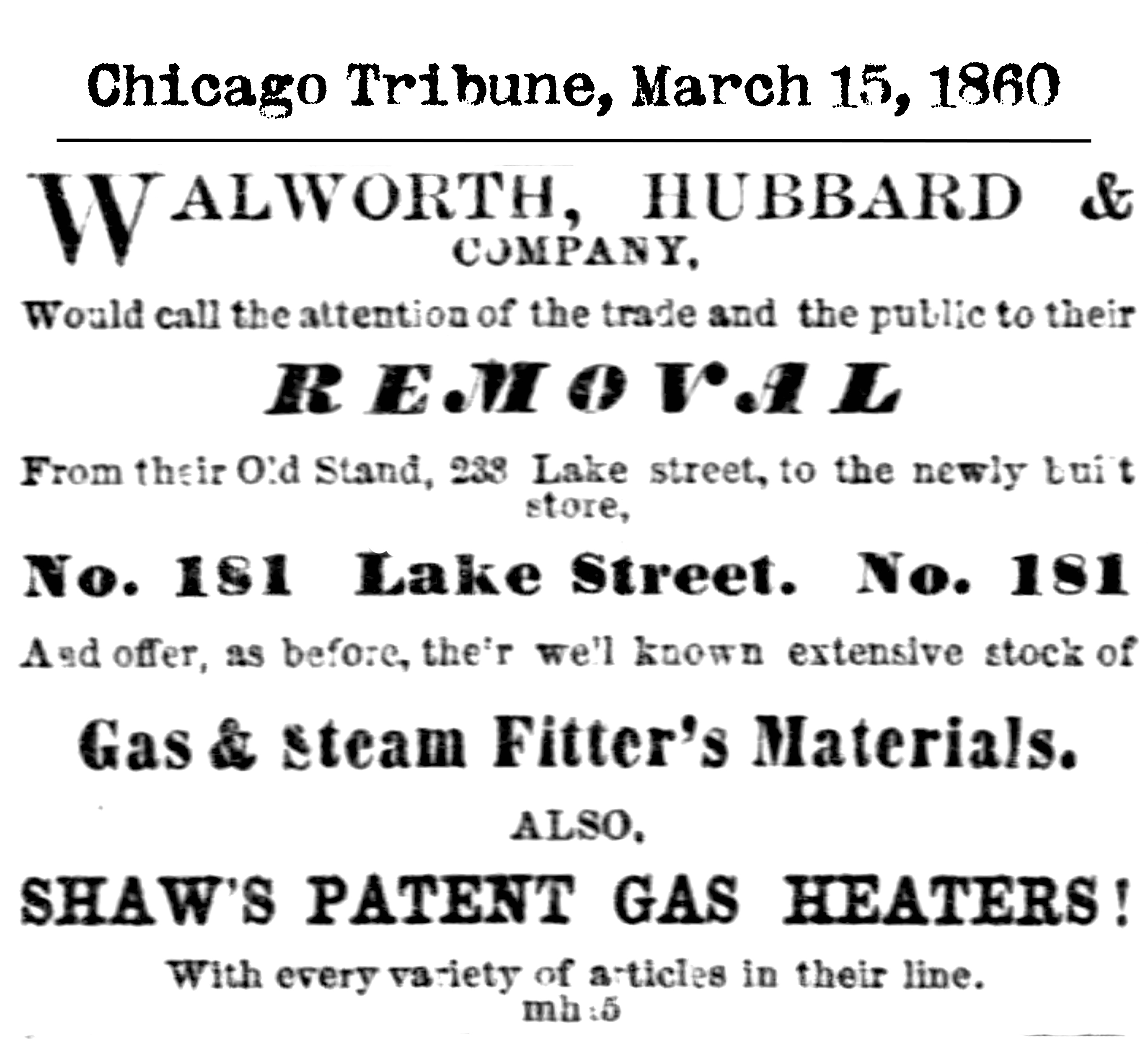 In a New Place.—In another column will be found the announcement of the removal of Messrs. Walworth, Hubbard & Co., from No. 233 Lake street to a new refitted store, No. 181 Lake street, where they will be found better located than ever before by their patrons. In the heavier and less showy portion of their stock, the gas and steam fittings proper, which from their heavy and prominent staples it will be less appreciable and marked than in the department which has grown to much magnitude in their hands, the ‘Shaw’s Patent Gas Heaters.” which have created such a sensation, and which have now a prominent and foremost place in the front of their new store, whereof the ladies will do well to take notice. For everything in their line this house have won an excellent reputation.

James Jones Walworth.
James Jones Walworth, the first to introduce steam heating to America, was born in Canaan, N.H. on 18 Nov. 1808, the son of George and Philura (Jones) Walworth. He was educated in Canaan schools and at academies in Thetford, Vt. and Salisbury, N.H. After teaching there for three years, he moved to Boston in 1829 in search of work. After a brief term of employment in a greenhouse, he found work in the Boston hardware business of Alexander H. Twombly & Co. He then became a partner in another hardware firm, Scudder, Park & Co., and was later superintendent of the Canton Hardware Co.

Walworth’s marriage in 1837 to Elizabeth Chickering Nason led to further business opportunities. During a visit to England, his brother-in-law Joseph Nason became familiar with a system of heating using hot water and high pressure. The Perkins system, as it was known, was sold by J. Perkins & Co. of London, and in it Nason saw an opportunity to introduce steam heating to America. The two formed the firm of Walworth & Nason in New York in 1841. The new enterprise succeeded at several locations in New York, but it was its Boston plant, established on Devonshire St. in 1842, which saw its greatest success. Beginning with the first steam heating unit in the United States installed at the Middlesex Co. in Lowell, Mass., they installed their system in numerous mills and other large buildings throughout New England over the next few decades. The firm was also the first to introduce the combination of heating and ventilation through their work in the Boston Customs House in 1846. The firm designed and manufactured parts, including the development of the globe and angle valves and, in 1845, began using smaller pipes to accomplish the task. In 1853, Walworth was called in to redo the heating system in the White House for newly elected president Franklin Pierce.

Financial difficulties in the early 1850s forced the separation of the New York and Boston houses. Nason returned to New York while Walworth, with his brother C. Clark Walworth and Marshall S. Scudder, remained in Boston with the newly formed J. J. Walworth & Co. The firm flourished as one of the chief sources of supply for fittings, valves, and tools. It was reorganized in 1872 as the Walworth Manufacturing Co. J. J. Walworth served as its president until his retirement from active duties in 1890.

In 1855, the unsuccessful branch house of Walworth and Hubbard was established in Chicago, with the Chicago fire bringing about its eventual demise. A more successful enterprise was the Malleable Iron Fittings Co., incorporated at Branford, Conn. in 1864 by Walworth, Nason, and Henry R. Worthington. Walworth remained its president until his death.

On the more personal side, with the exception of time in Brookline and a move to Boston in his later years, Walworth lived most of his life in parts of Newton, Mass. He was a representative to the state legislature from that town in 1870 and 1871. He was an anti-slavery sympathizer, a free-soiler, and in favor of temperance reform. He was a life-long member of area Congregational churches, a founder of the Lasell Seminary in Auburndale (Newton), and president of the educational society in that city.

Elizabeth Walworth died in 1886, and in 1888, James married again, this time to Lydia Sawyer, the widow of a former business associate. His only son, Arthur Clarence Walworth, was born in 1844 and became president of the Walworth Construction and Supply Co., which in 1887 took over the construction business of the Walworth Manufacturing Company. James J. Walworth died on 28 Apr. 1896 at the age of 87. 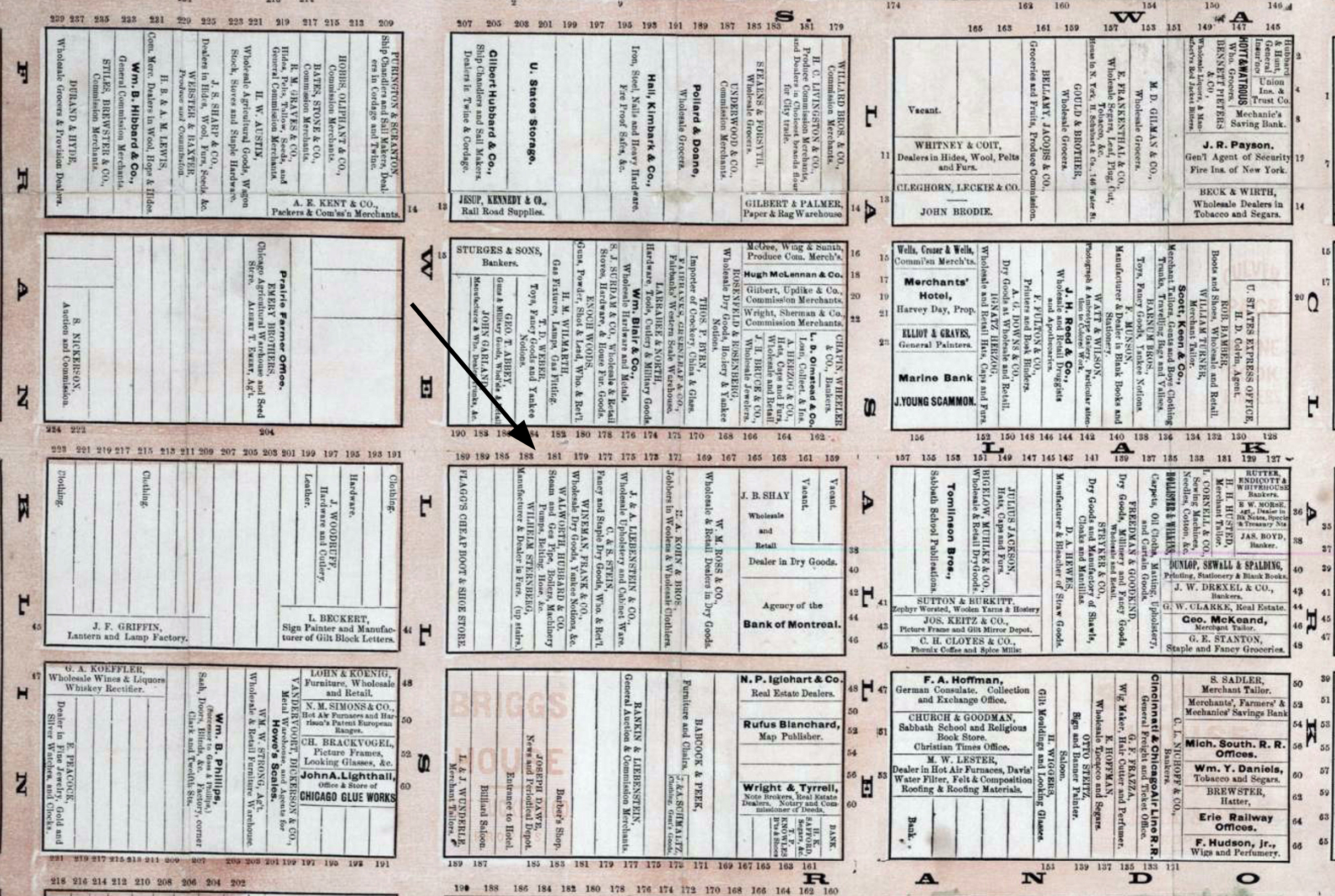