Unity Church—Rev. Robert Collyer, pastor. This society has commenced work on a church building which, when completed, will be one of the finest in the city. It is ti be erected on the northwest corner of Chicago avenue and North Dearborn street, and will cost about $125,000. It will be of white Athens marble, rough, in the decorated Gothic style, with two towers, the spire of the highest reaching two hundred feet, and the other one hundred and twenty-five feet. The extreme outer dimensions will be ninety-six by one hundred and twenty-five feet. It will seat one thousand persons, exclusive of the gallery for organ and choir, will be lighted at the sides, and will be finished within with black walnut and cherry. It is expected to be completed in about a year. T. O. Wadskier is the architect of this splendid structure.

Yesterday afternoon the corner stone of the new Unity church, now being constructed by Rev. Robert Collyer’s congregation, on the southeast corner of North Dearborn and White streets, was laid with appropriate ceremonies. This edifice will be the largest Protestant church building in the city, with the exception of the First Baptist church, which, in connection with its chapel and Sunday school rooms, covers more ground. The dimensions of the new church are to be as follows:
Length, east and west, 155 feet; breadth, north and south, 92 feet; height, from the ground floor to the apex of the roof, 100 feet. The audience room, which occupies the whole building above the basement, will be large enough to seat comfortably over 1,000 persons.

The style of the building is the early English, decorated. In the front, flanking each corner, there will rise two square towers, pierced with three series of windows, and surmounted by octagonal spires, the total height of which will be 170 feet. 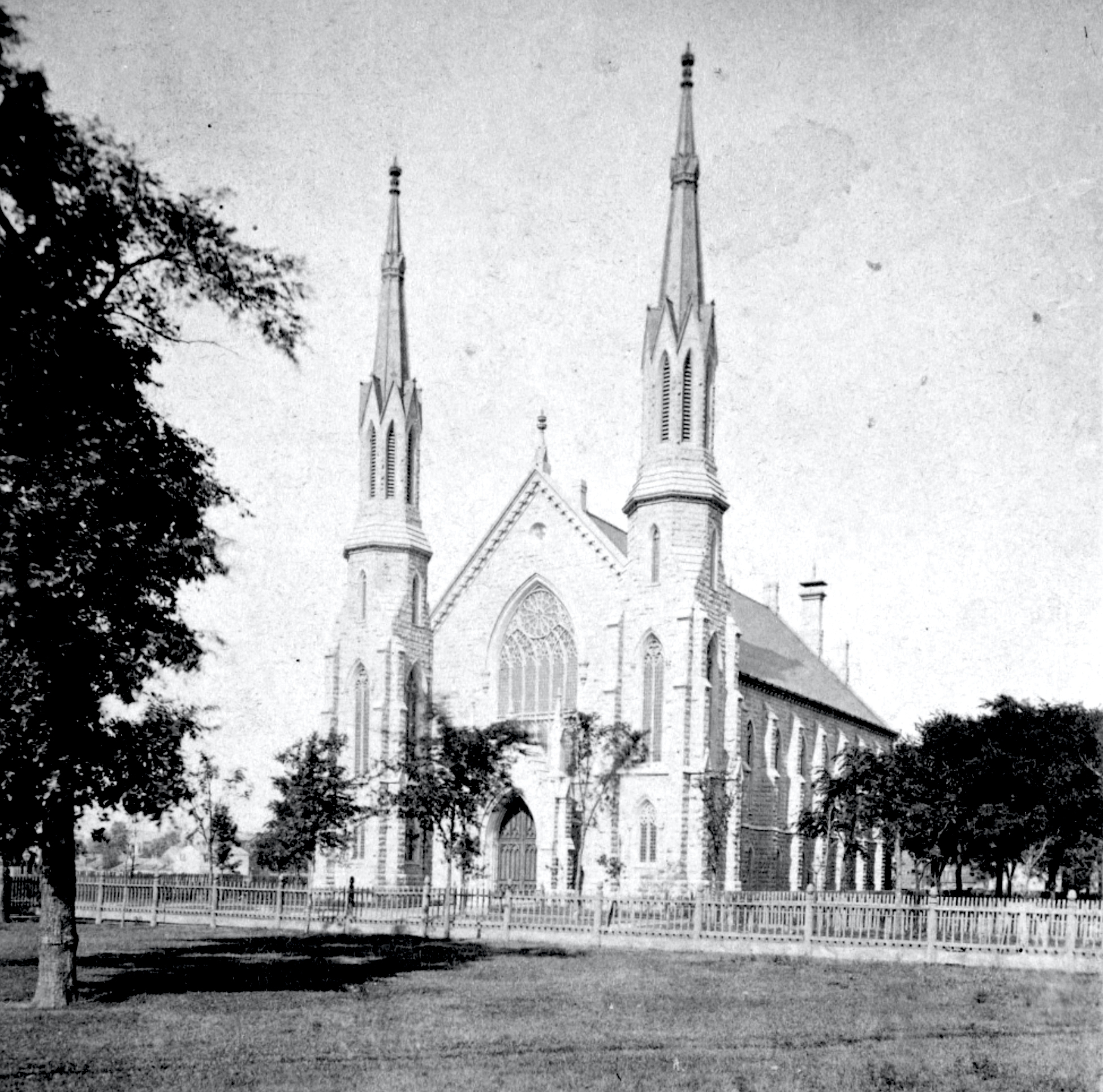 Between these towers will be the main entrance, which will consist of a porch, projecting ten feet from the main building, in ornamented finials. The doorway will be 13 feet in width and twenty-six feet in height. On each side of the doorway are to be six highly decorated clustered columns, the four outer ones of which will be surmounted by caps representing te oak, the ivy, the hawthorn, and the grape-vine. Rising from the two outer columns will be a hood moulding, meeting and forming a pointed arch. Above the porch there will be the largest window in the city. This window, the dimensions of which will be 20 by 44 feet, will be very ornamental in character, filled in with Gothic tracery, and having six divisions forming five mullions. In the arched portion will be a Gothic rose. The front gable, between the two towers, is to be surmounted by a rich Gothic cornice, mounted by an elaborately carved finial, fifteen feet in height. The material that is being used for the walls of the church is Athens stone, which will be finished in rockface work.

The interior will be highly finished in black walnut and butternut, with an open ceiling of timber work. The pews will be formed on arcs of concentric circles, so that every sitter will exactly face the preacher. The roof will be fitted with rich Gothic tracery. Opposite the chancel will be a gallery for the choir and organ. The basement will contain a large lecture room, Sunday school rooms, a church parlor, and a pastor’s study.

T.V. Wadskier is the architect of the church.

A tin box containing records of Unity church, printed sermons by its pastor, church year books for 1867, copies of the Chicago daily papers and the leading Unitarian papers, were then placed in a cavity in the corner stone, and the stone was placed in its position.

Rev. Robert Collyer, the pastor of the church, then delivered the address. 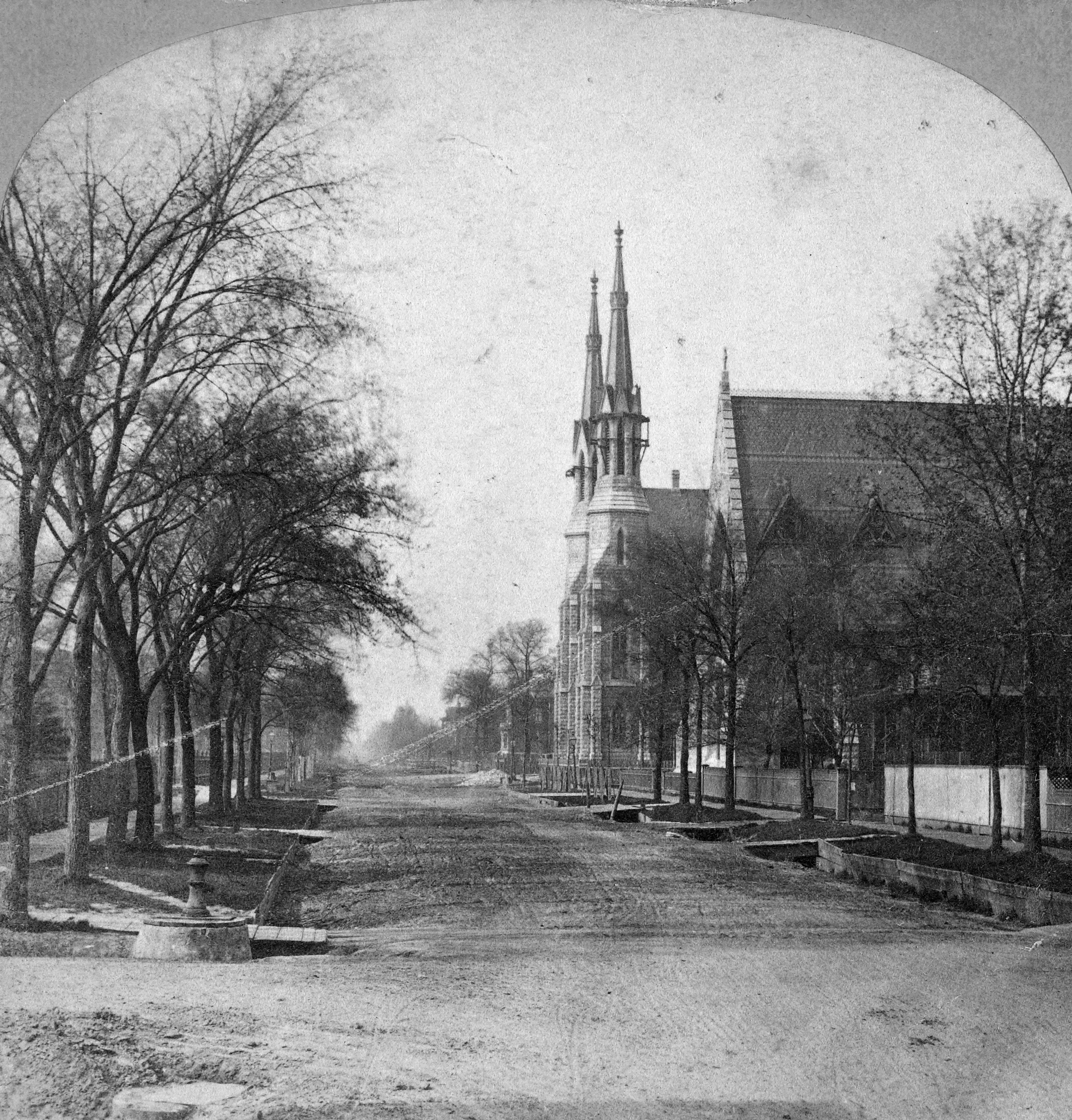 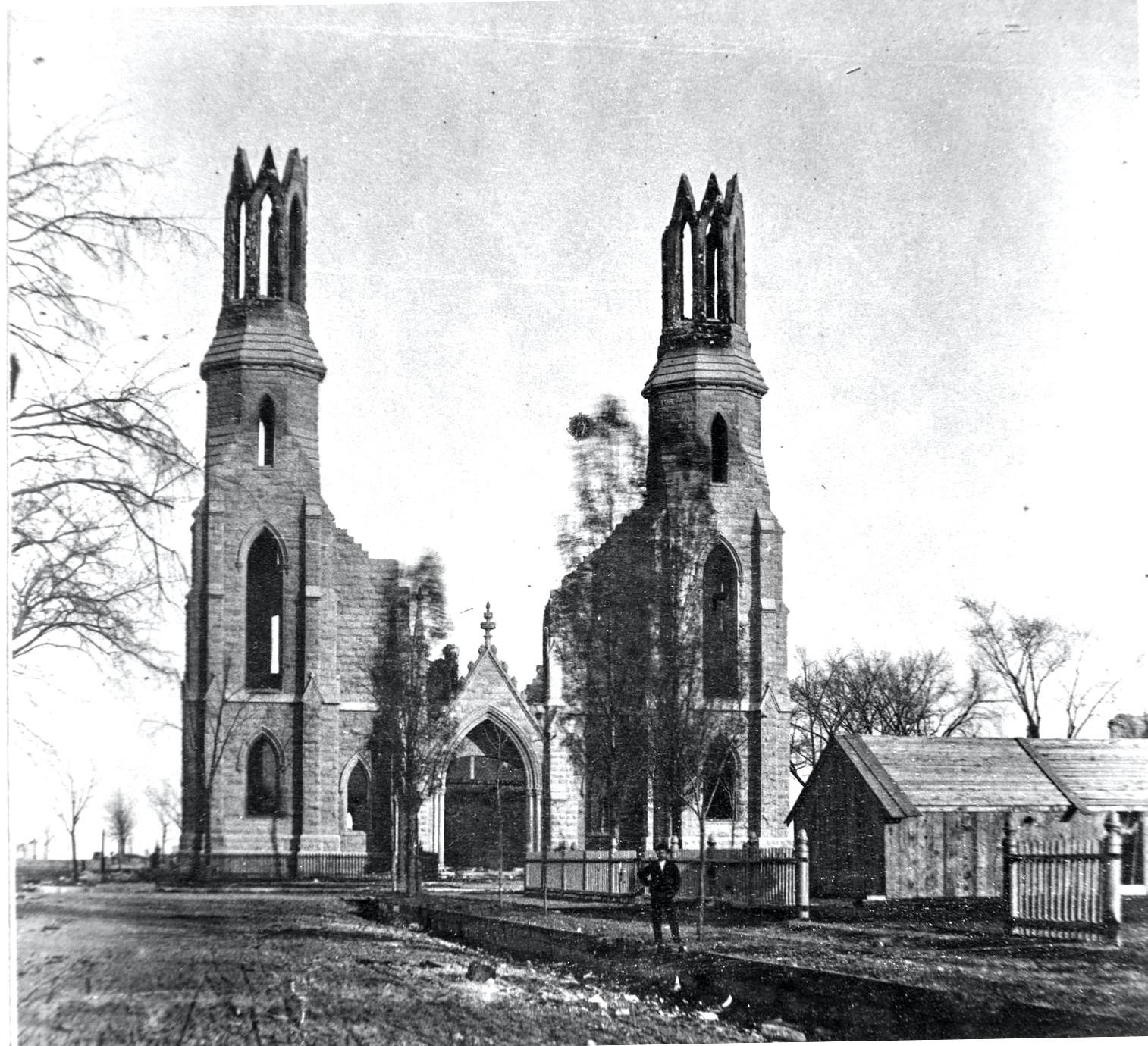 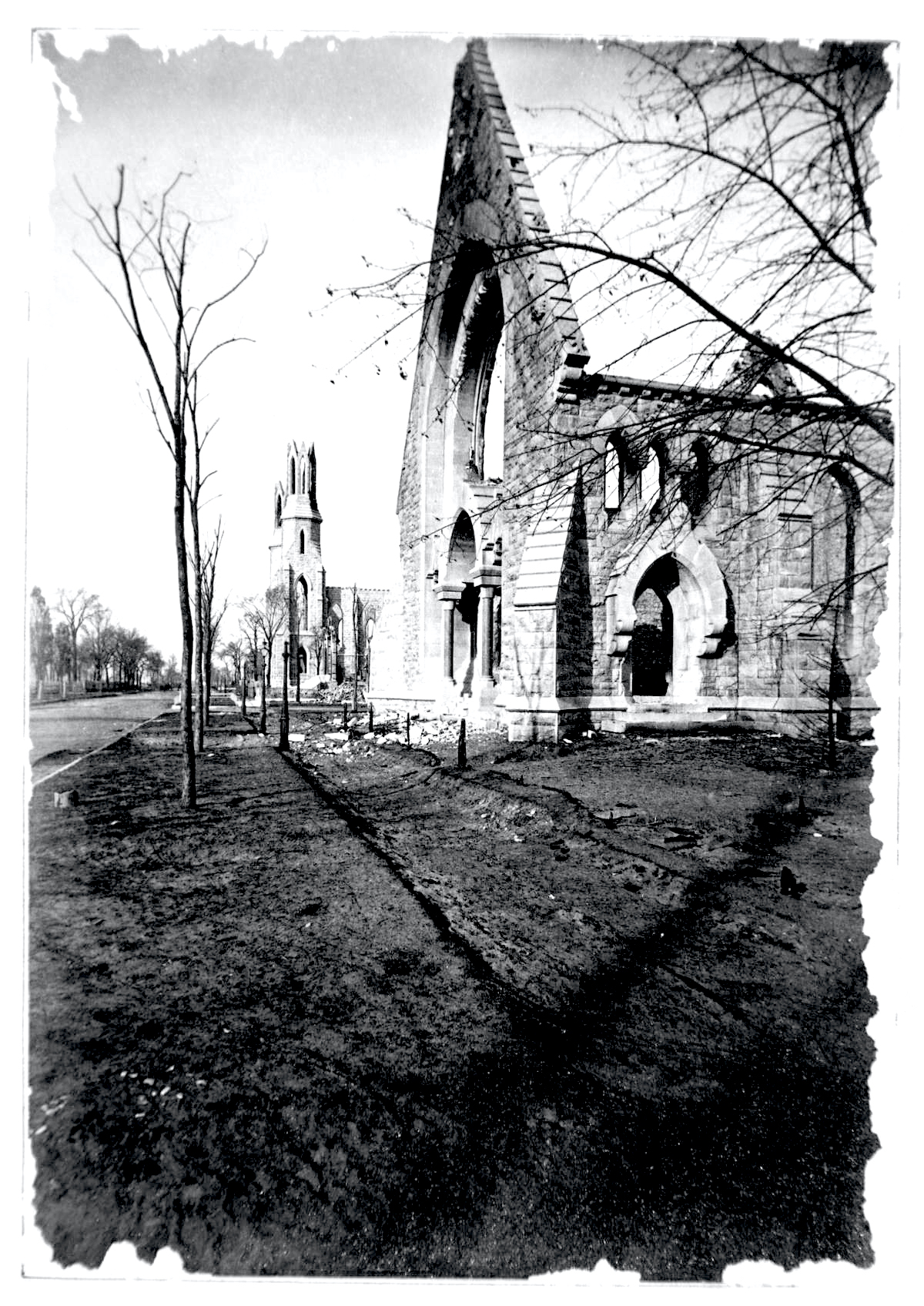 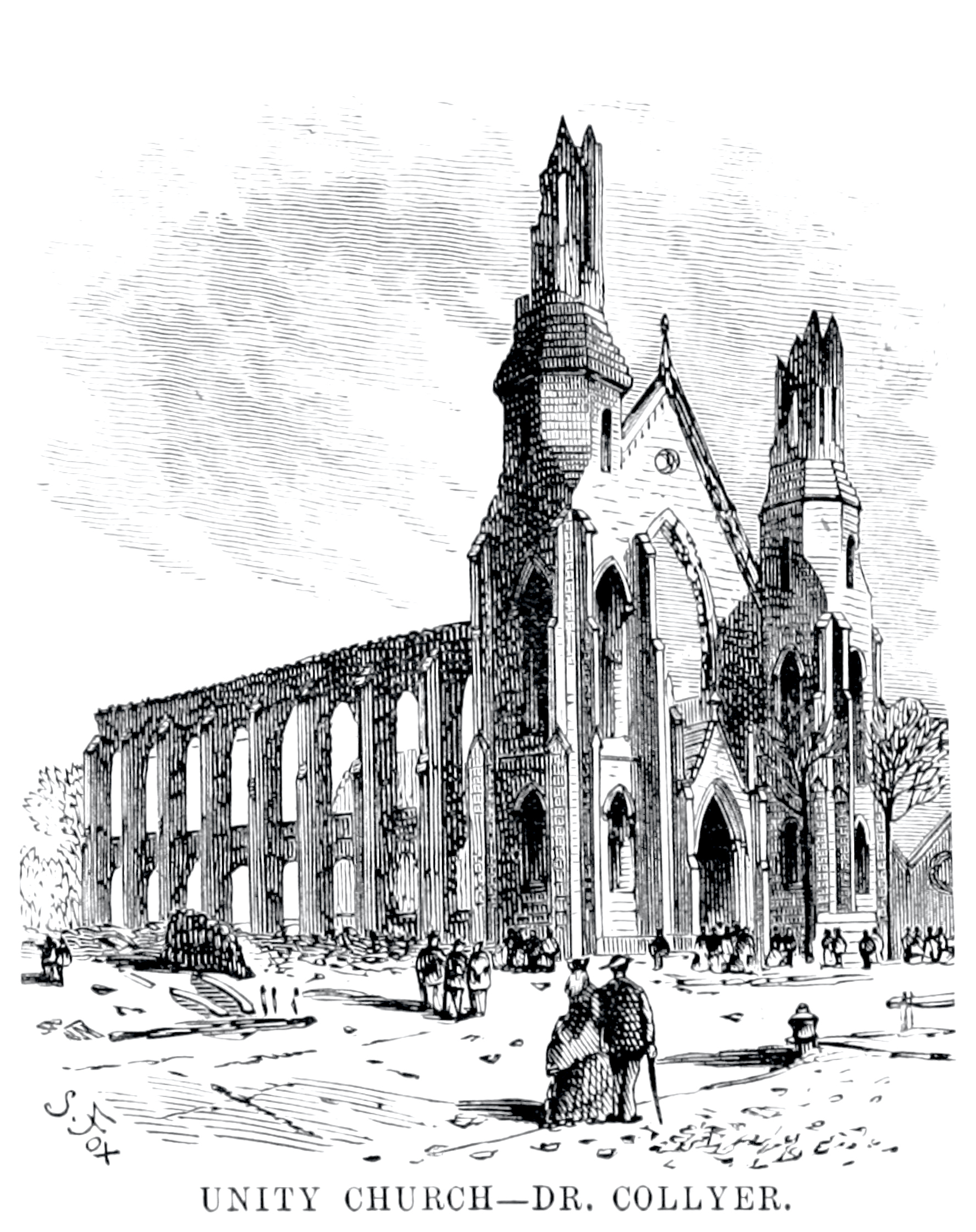 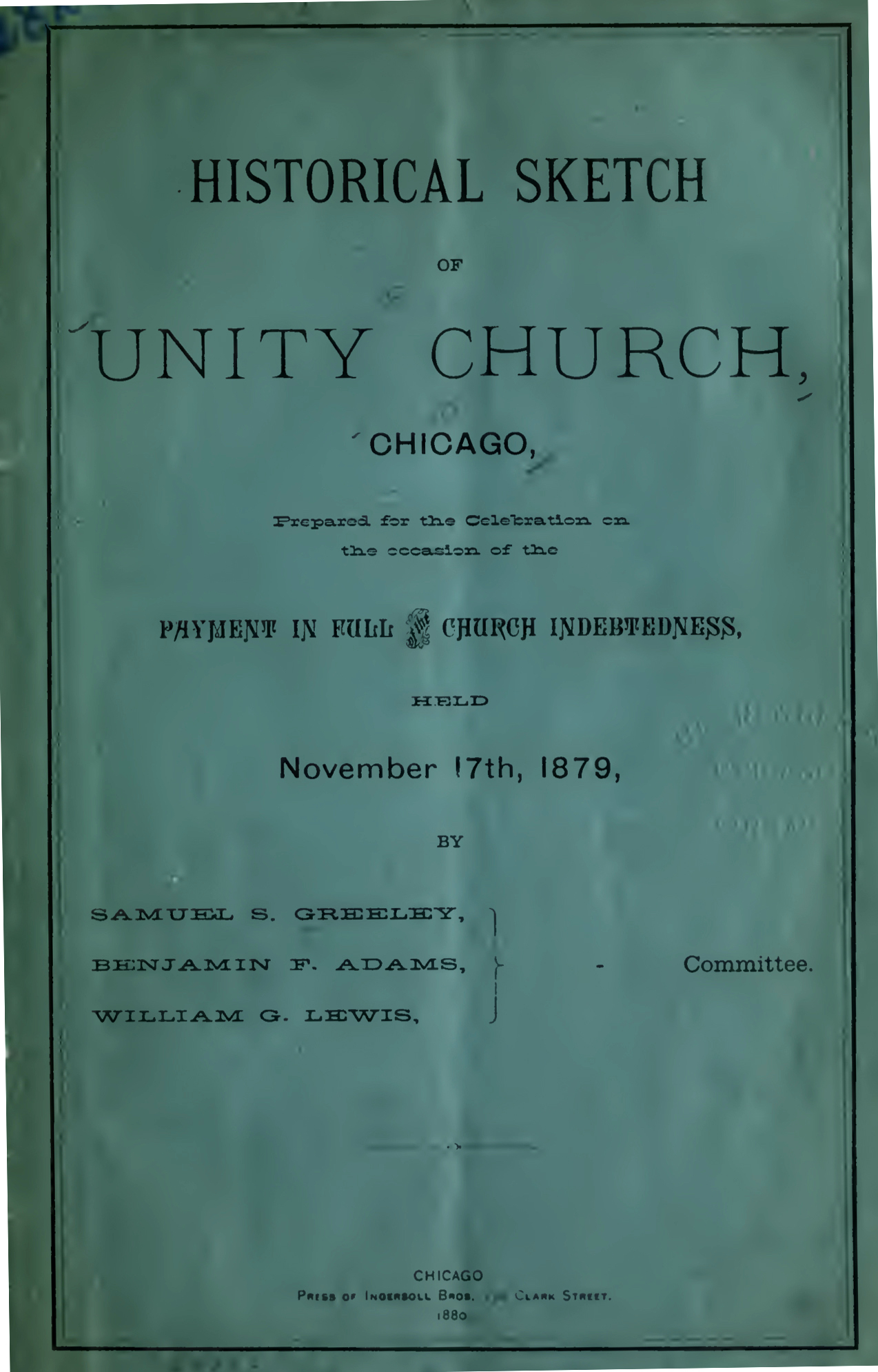 Unity Church sprang from the urgent desire on the part of those members of the First Unitarian Church and Society of Chicago, who lived in the North Division of the City, to have a church near their own homes.

The property consisted of an eighty-feet lot on Washington street, between Clark and Dearborn Streets, the site of the wooden church, which was soon after destroyed by fire and it was voted, at a meeting of the Society, held April 27th, 1857, that one-quarter of this lot should be given to a church in the North Division, one-quarter to a church in the West Division, half being retained for the use of the mother church. Messrs. E. K. Rogers, Artemas Carter, Jerome Heecher and Josiah L. James, were made a committee to arrange the details of the division.

In 1866 Mr. Collyer made his first visit to his Yorkshire home, and it was voted to take advantage of the long vacation to enlarge our church by adding awing on each side. But “exceeding peace had made our people bold,” and when the money was to be provided, it was found that our capitalists were strongly in favor of abandoning the site which we had outgrown, and building a large and permanent house. The apparent prosperity of the times made great undertakings seem easy, and it was soon decided to buy the lot, which we now occupy, and plans and estimates for a stone church to cost not more than $60,000. The corner stone was laid on August 29th, 1867, with appropriate ceremonies.

The Chicago Avenue lot with the wooden church, was conveyed, October 19th, 1867 to the North Baptist Church for $16,662. 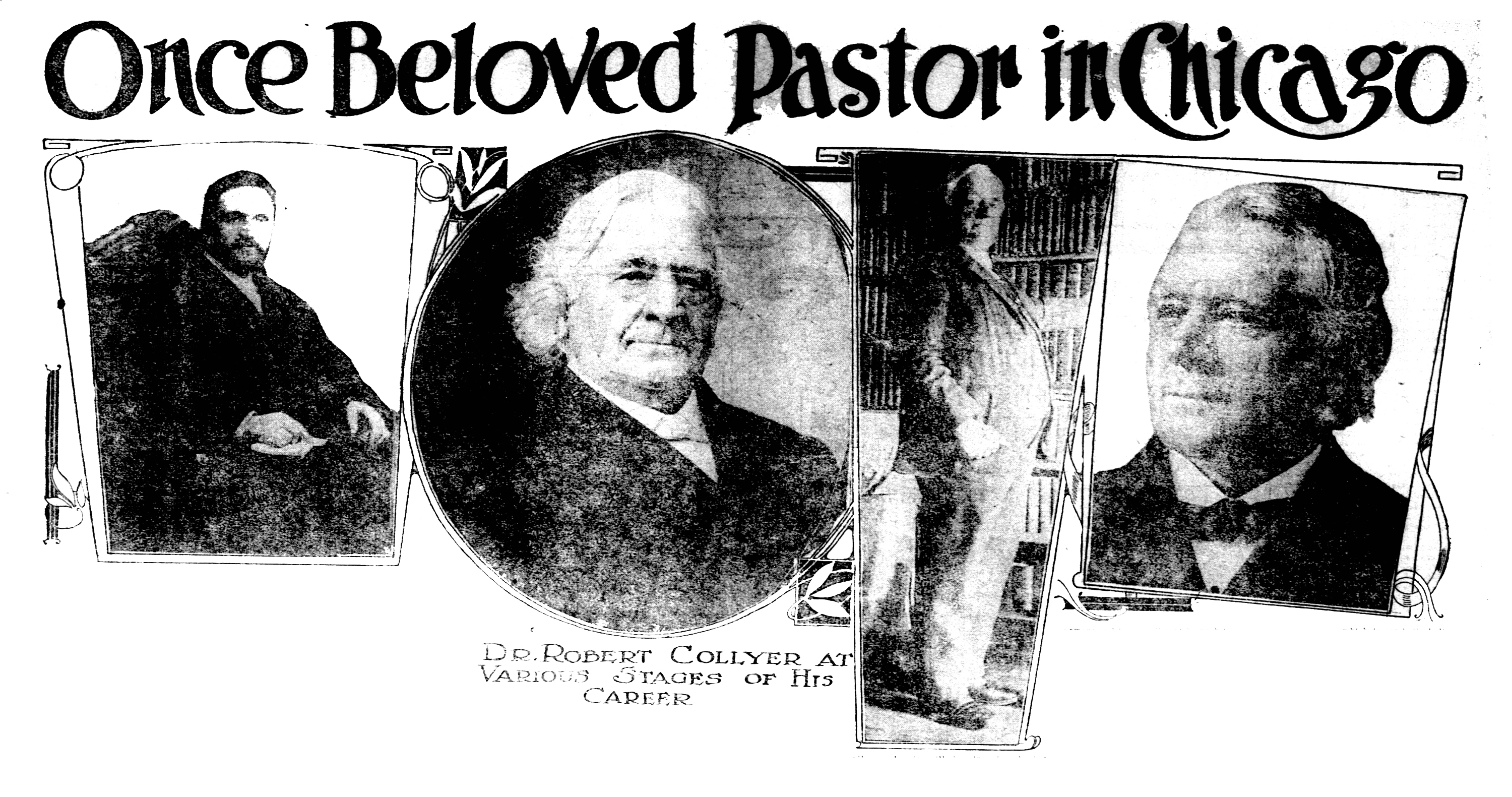 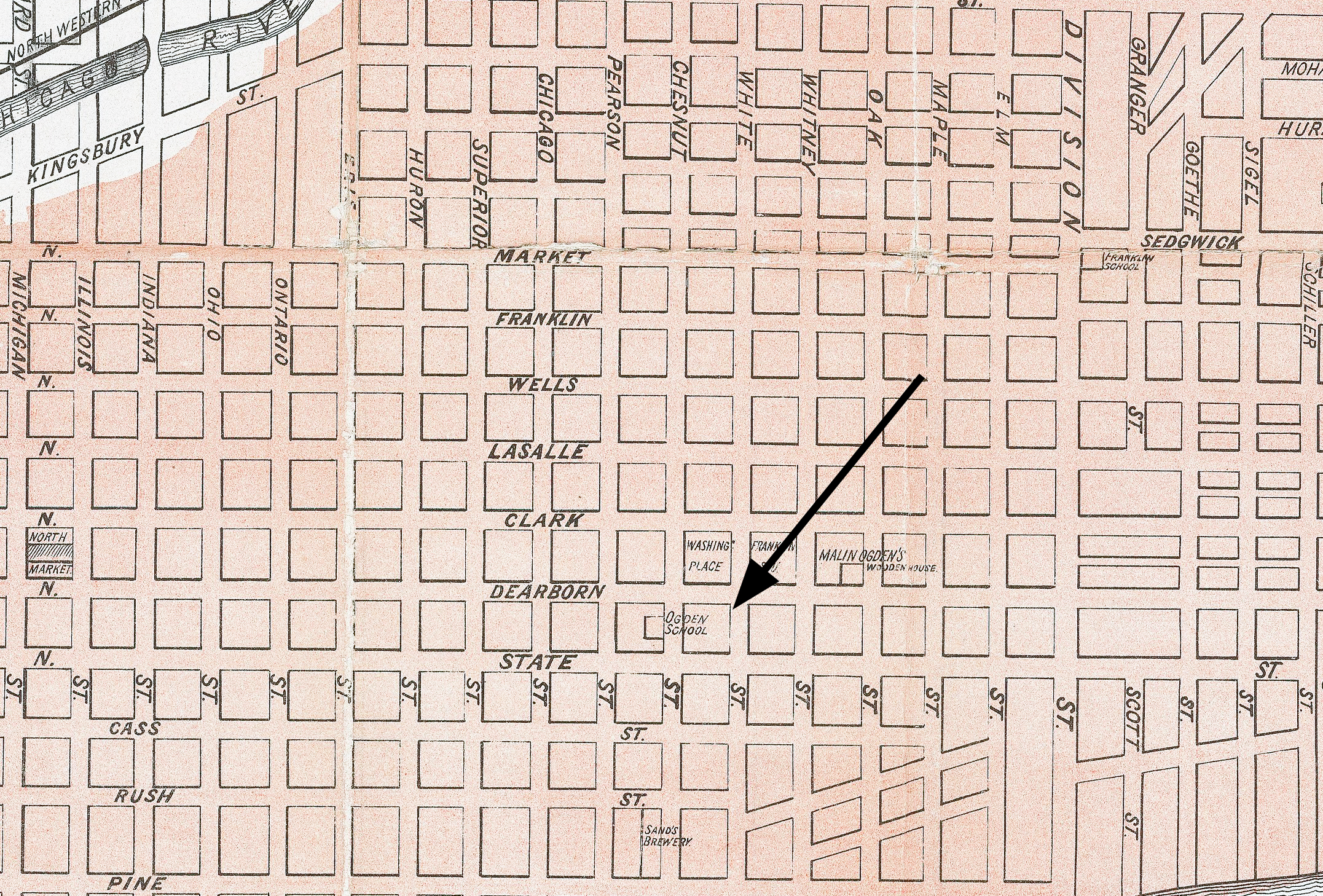