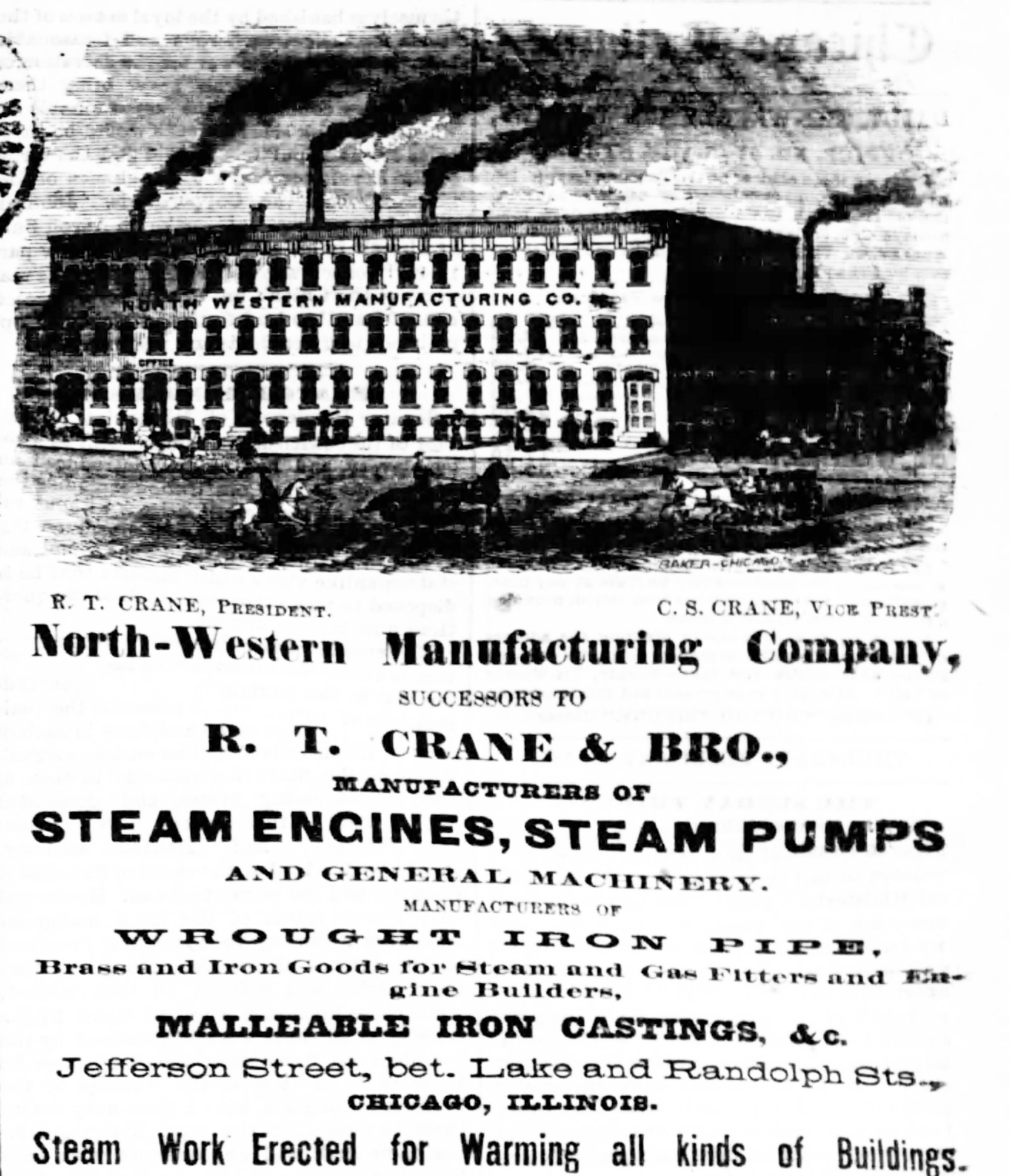 The Northwestern Manufacturing Co.
We call the attention of our readers to the advertisement of the Northwestern Manufacturing Co. in another column of this issue. This company has most extensive facilities for the manufacture of machinery, and is making a specialty of building first-class steam engines, combining strength, durability and gracefulness. A large number of engines of their manufacture are now running in and about this city, and they more than realize all the favorable anticipations entertained regarding them. Another great specialty of this company is their manufacture of wrought iron pipe for which they have unusual facilities. Their ability for this manufacture removes the necessity heretofore existing for customers sending their orders to the East, is not only the pipes, but all the iron, brass and malleable iron goods, which are used with the pipe, are made by this firm. Still another specialty is their manufacture of steam heating apparatus, which is now employed in many of our public and private buildings, and which is found to be both economical and pleasant in the highest degree. Their most popular form of heating apparatus is that introduced last season, entitled the “Low Pressure Steam Chamber” Heater, which has won the highest favor in the East, for years past, as fully meeting every requirement for a model heater. Its wrought iron boiler cannot crack, and its wrought iron piping, which constitutes the radiating surface, has no joints which require packing and is, therefore, of unsurpassed durability; and the economy is beyond all anticipation. Parties interested are invited to examine it. The Northwestern Manufacturing Company have also a malleable iron foundry, and are turning out a great variety of castings of a superior quality. This is a branch of trade that was very much needed here, which those using them cannot fail to appreciate.

Our Great Manufacturing Interest—The Crane Brothers Manufacturing Co., (Late Northwester Manufacturing Co.)
We this month present our readers an illustration of the principal works of the Crane Brothers Manufacturing Co., located on North Jefferson street in this city. These extensive works have a frontage of nearly 300 feet, extending back to Desplaines street, 373 feet, and having on that street a uniform front with that on Jefferson. The compliment of workmen employed is over 700, with a pay roll of nearly $50,000 per month. It has been our pleasure heretofore to exclusively confine our illustrations to the rebuilding of of mercantile and banking institutions, but we would be remiss in our duty did we not illustrate our great manufacturing interests. 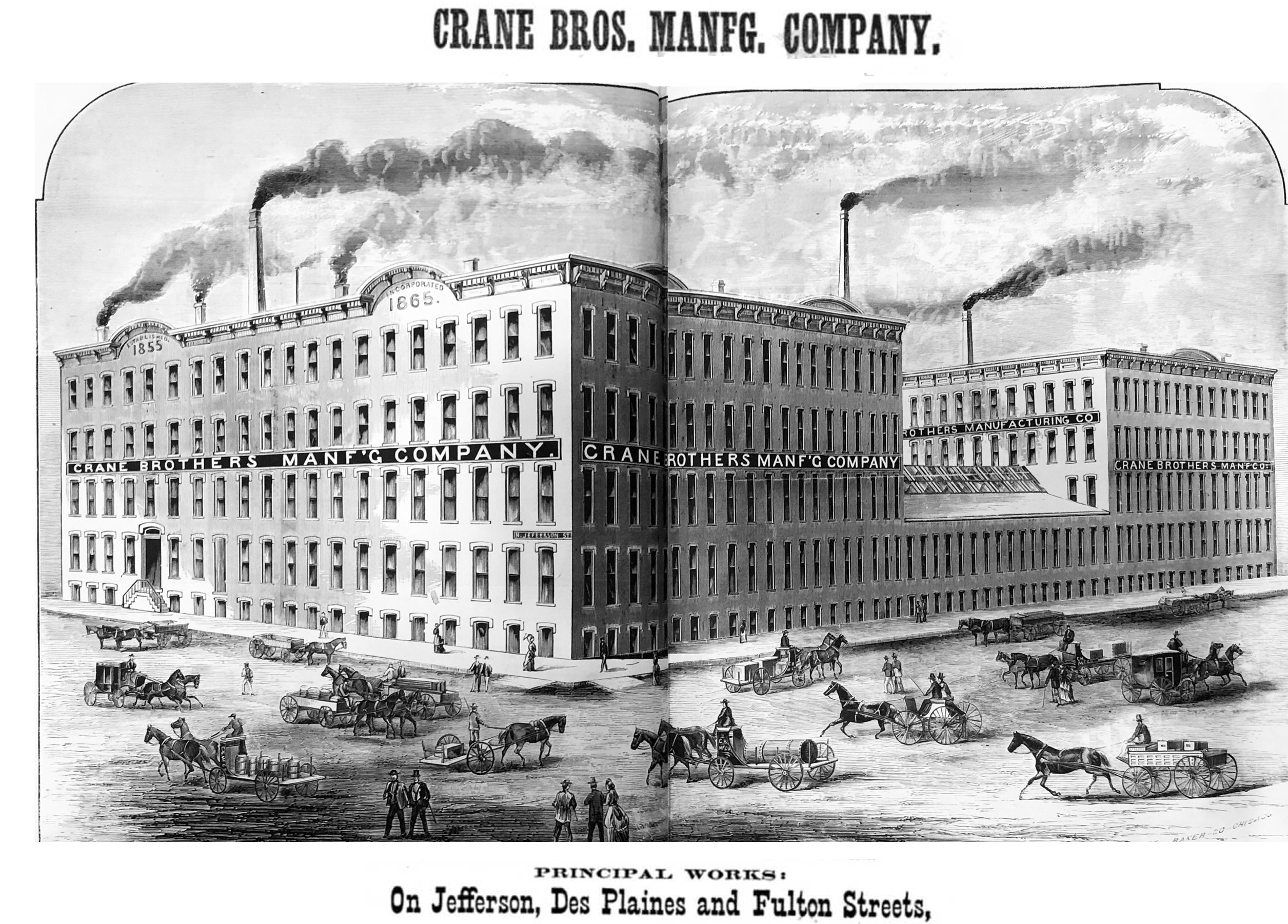 A Type of Chicago—A Type of Chicago—Origin of the Company.
In the Crane Brothers Manufacturing Co., we present a true type of Chicago. The history of nations are oftentimes found in the lives of individuals. Chicago’s greatness of to-day only feebly shadows its future. R. T. & C. S. Crane, the founders of this establishment are still in the prime of life, yet the story of their success is already interwoven with the birth and progress of the manufacturing interests of Chicago and the West. Coming here from Patterson, N. J., in 1855, they staked their fortunes with Chicago and settled down to the trial on West Lake street, in a small way, making a specialty of brass goods and warming buildings with steam, which latter branch of business was then hardly known in the Northwest. Their staff then was five in number. Ten years’ later they organized the Northwestern Manufacturing Company, and built what was considered to be at that time the largest establishment in Chicago. 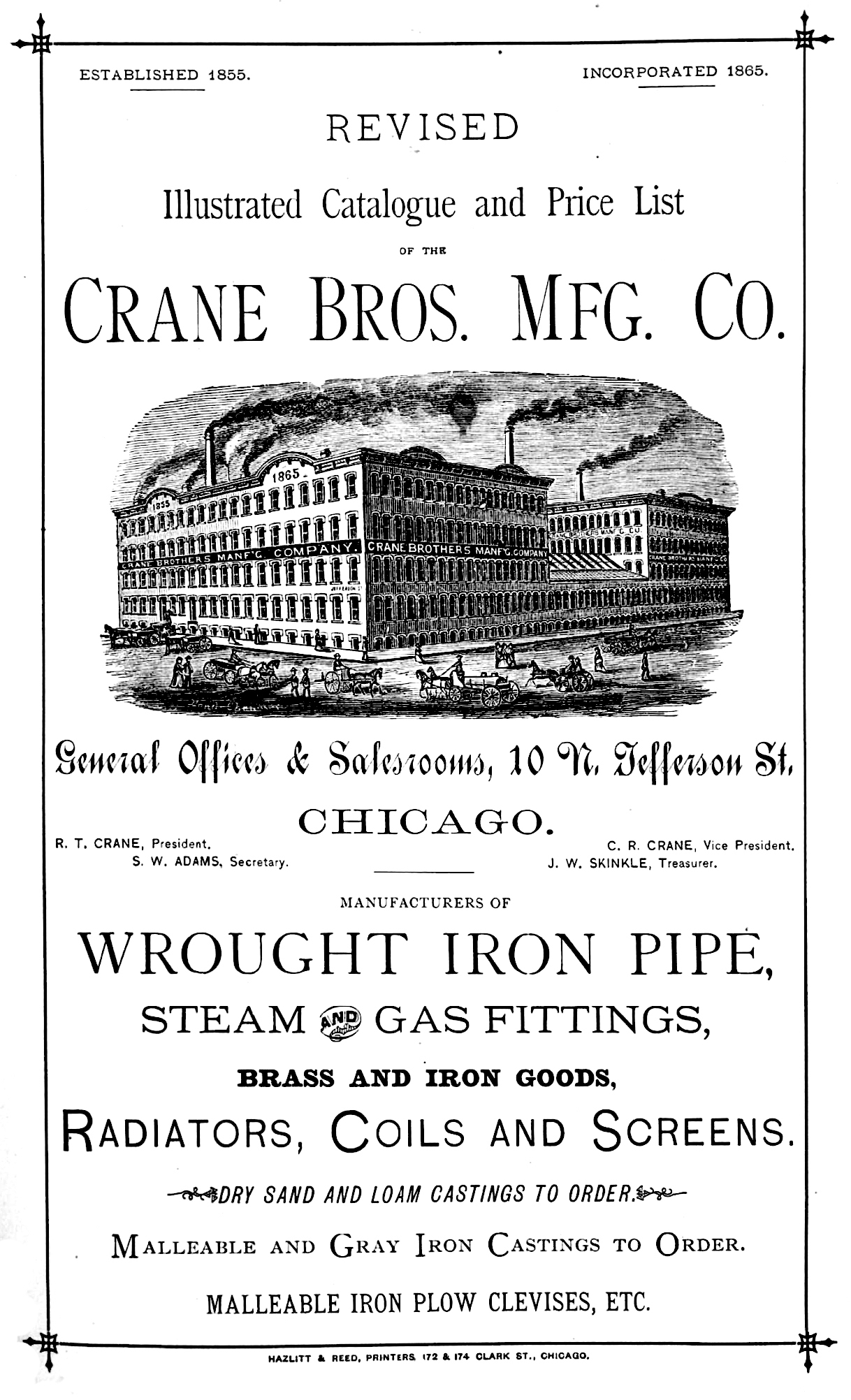 Progress and Increase of Facilities.
From that date to the present time their progress has been rapid, almost beyond comparison even in this city. In 1868 finding that they were sending to the East for hundreds of thousands of feet of wrought iron pipe annually to supply the daily increasing demand for their Steam Warming and Ventilation Apparatus, they conceived the erection of a mill for the manufacture of wrought iron pipe in Chicago. Their extensive buildings, an Fulton and Desplaines streets, were erected for this purpose and filled with the latest improved machinery and the most skillful workmen attainable. The reputation of their pipe is now second to none in the world, for quality of workmanship and durability. This branch of business alone employs over a hundred men, and consumes over three hundred tons per month pf the best quality of wrought iron. The Company cannot be accused of egotism when they assert that there is “no other establishment in the United States that can compete with their steam warming and ventilating apparatus, especially in regard to first-class work.

There is another department in this establishment to which they have established an equally high claim, viz., their steam freight and passenger elevators for hotels, stores, office buildings and warehouses. In both cases the Company manufacture all the parts and portions from the crude material to the finest detail.

The Various Departments.
To move successfully the machinery of so large an establishment demands of the officers of the Company great tact and ability, with unceasing attention. Perfect ease and harmony of action is secured to this establishment by its subdivision into twelve departments, each being presided over by a skilled superintendent, who is therefore interested in its destiny. A walk through the departments will find them subdivided as follows:

Department No. 1, Draughting and Patterns. Here are rows upon rows of racks filled with shelves upon which are placed patterns of every conceivable mechanical contrivance known to man. These cost over fifty thousand dollars.
Department No. 2, Iron Foundry with its glowing furnaces and liquid iron.
Department No. 3, Malleable Foundry and Fittings Department, in which is made every variety of malleable iron goods for plumbers’ and gas fitters’, besides a large variety of malleable goods for other purposes.
Department No. 4, we have already noticed, it being for wrought iron pipe.
Department No. 5 is the brass foundry and finishing department, where is made almost an endless variety of brass goods, for all purposes, such as brass valves for water, steam, and gas, steam, and water gauges, etc.
Department No. 6 is the department for radiators, coils, and screens, the manufacture of goods is now made a specialty with this company. Their facilities re such that they can supply to steam warming contractors at much lower rates than they can manufacture themselves.
Department No. 7 is that of steam warming and ventilating. They have furnished their patent apparatus for many of the finest buildings in this and neighboring cities. It is adapted to all buildings from private residences to the largest public buildings.
Department No. 8, the machine department, is devoted to the manufacture of steam engines and boilers, steam passenger and freight elevators, steam pumps and general machinery. The machinery and appliances for the execution of the work are of the latest patterns and liberally provided.

The Officers.
The company have been fortunate in the selection of its officers, all of whom are Eastern men, R. T. Crane, President; C. S. Crane, Vice President. The latter has recently retired from active management. The President is still the guiding spirit of the whole concern, which all are willing to admit. Out of compliment to the Brothers Crane, the stockholders recently changed the name of the Company to its present title; identifying with its future the name of its founders, and evading being confounded with the score of petty concerns who rush forward to adopt the original title. S. W. Adams, of Albany, N.Y., makes an able Secretary, Geo. S. Redfield, of Boston, the Treasurer, has made a good financial record, and James Beggs, of New York, the General Superintendent, is courteous, affable and active in his duties.

AN ELEMENT OF SUBSTANTIAL WEALTH.
It is such grand establishments as this, employing hundreds of hands and heads that produce wealth, and give our city its substantial character. We must turn our capital more largely to manufacturing here in the West, if we would keep it here permanently. In the busy hive of industry which this Company have built up from so small a beginning, can be seen but the rightful and certain issue of all enterprises where pluck and perseverance are combined with strict business integrity. We cannot conclude better than by quoting the Company’s motto:

Eternal vigilance is the watchword of success. 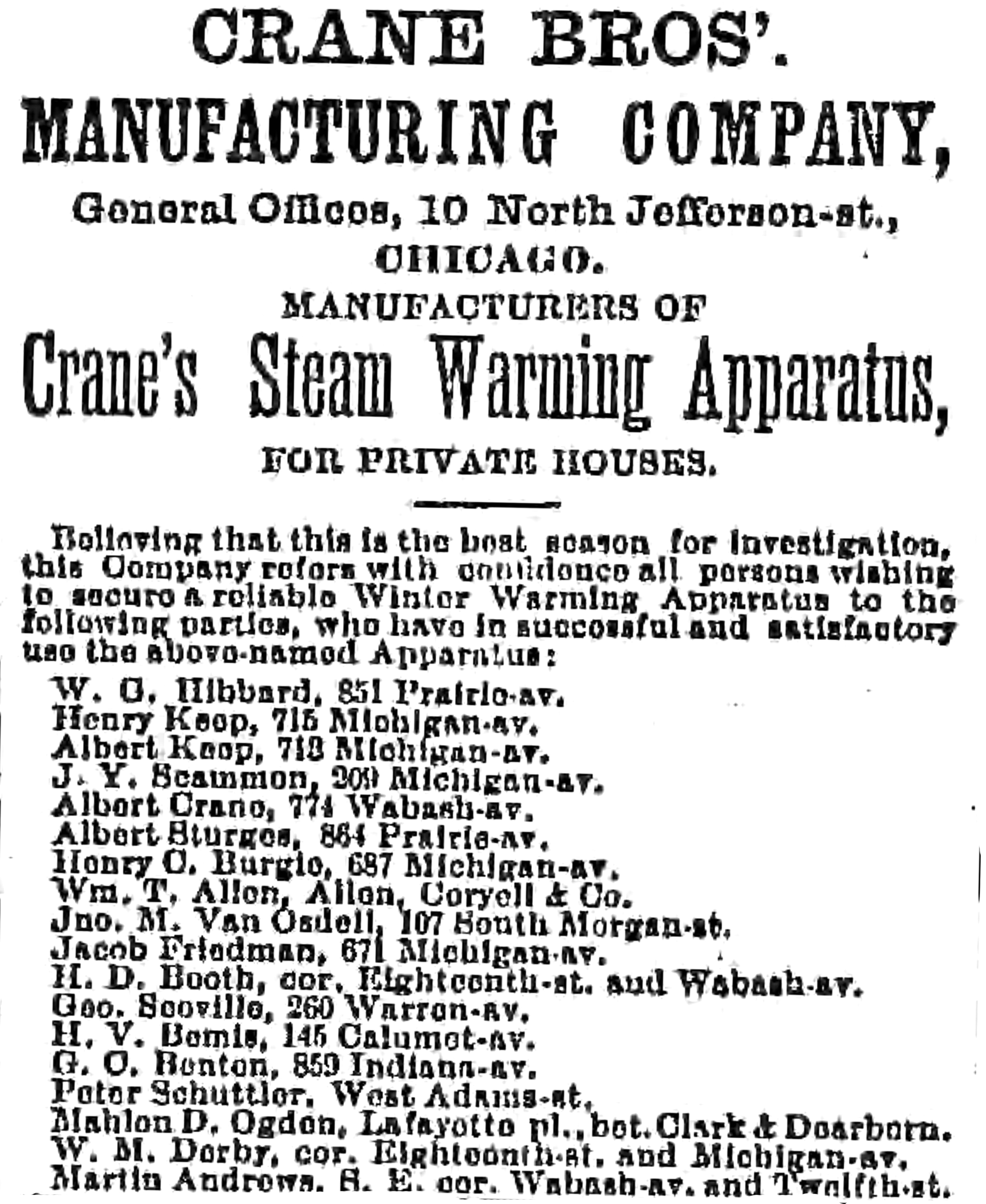 Steam Warming for Dwellings.
We would call your attention of parties contemplating putting warming apparatus into their dwellings to the advertisement of Crane’s Apparatus, manufactured by the Crane Bros.’ Manufacturing Company. This old and well-established house has a reputation in this line that needs no comment at our hands. We would, however, suggest ton our friends who are to rebuild their homes that they examine the merits of the above apparatus during this cold weather, as it bears the reputation of being a perfect “Winter Warmer,” which is, we presume, what every one wants.

The thirtieth anniversary of the Crane Bros. Manufacturing Company will be celebrated at the Briggs House next Friday evening. 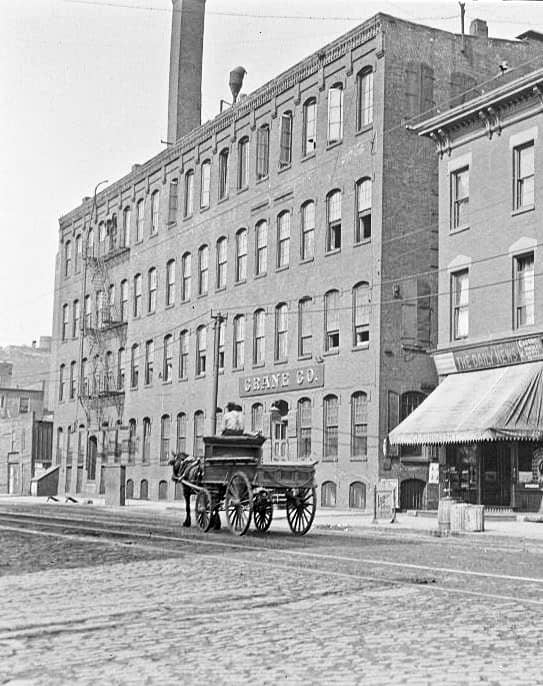 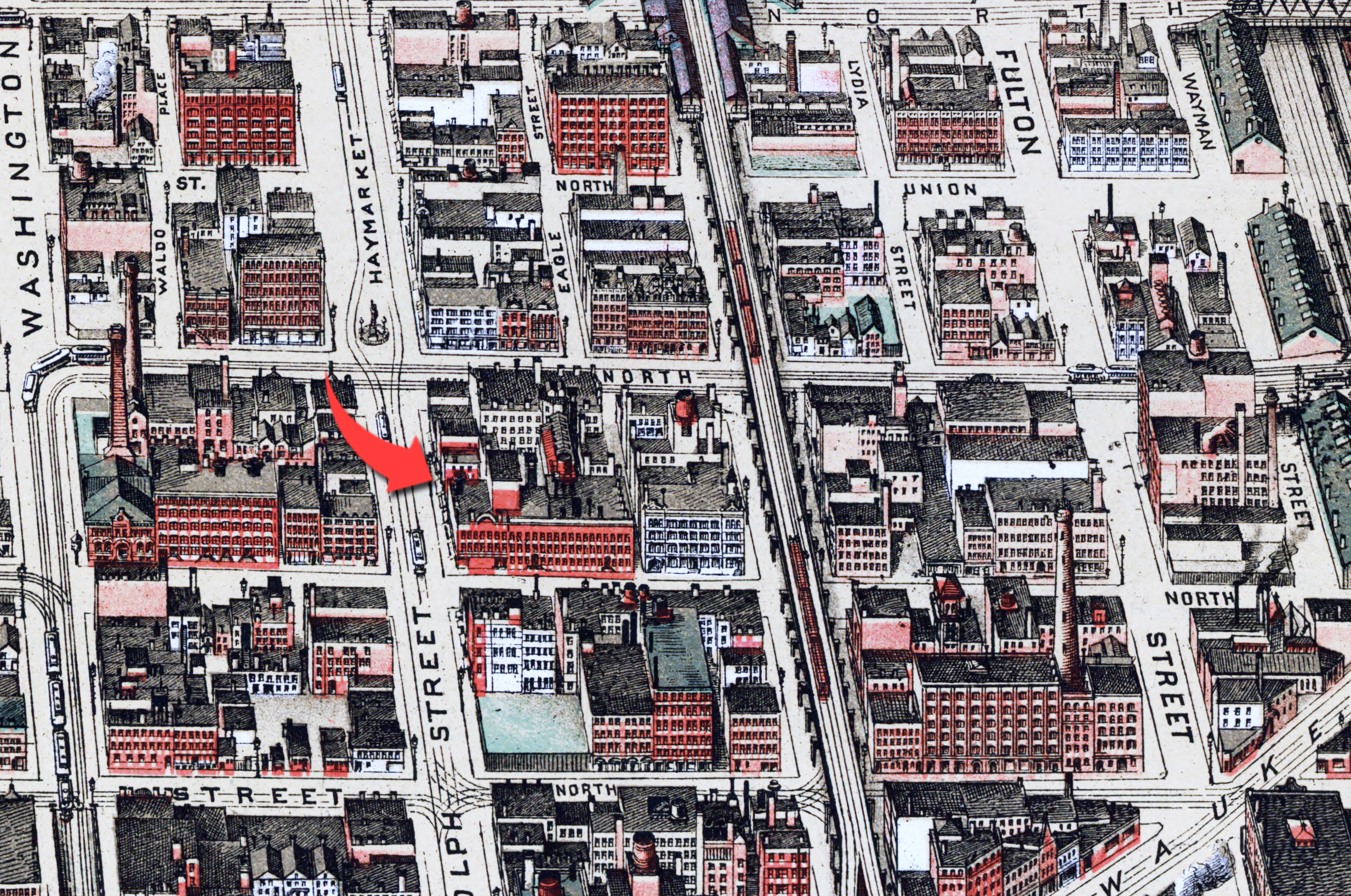 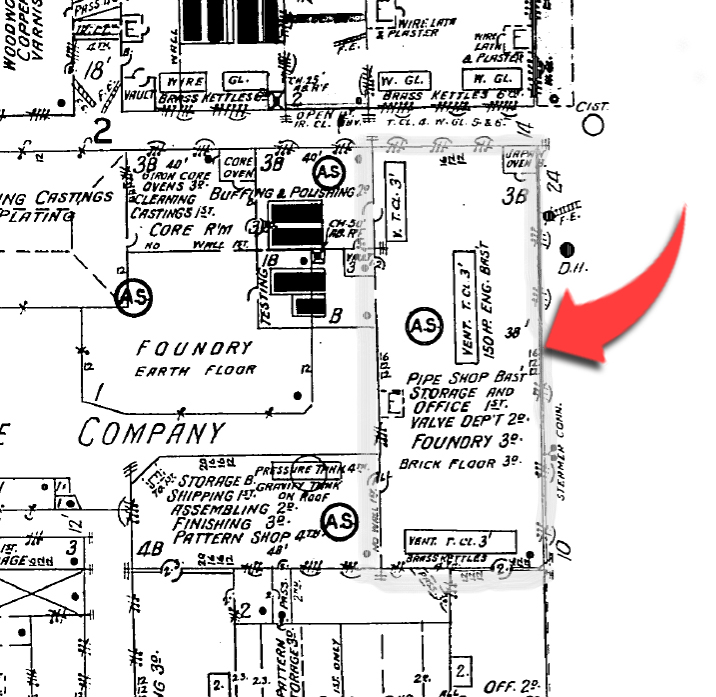 160 Acre Crane Deal Closed.
The purchase by the Crane company from John S. Miller of the tract of 160 acres at the southwest corner of Thirty-ninth street and Kedzie avenue, which is to form the site of the new $5,000,000 plant of the Crane company, has been closed and the deed filed for record. The consideration in the deed is $10, but it is understood to have been around $650,000. McKinney, Hodge & Manns were the brokers.

By Leonor Vivanco
The sculpture that commemorates the 1886 Haymarket bombing in the West Loop has been temporarily relocated to Union Park during construction of a residential tower and redevelopment of a historic office building.

The bronze Haymarket Memorial monument was moved last month from its home near Desplaines and Randolph streets to protect it during construction of the site adjacent to the sculpture, according to Christine Carrino, spokeswoman for the city’s Department of Cultural Affairs and Special Events. Union Park is the large park closest to the site and home to the Pitchfork and North Coast music festivals. 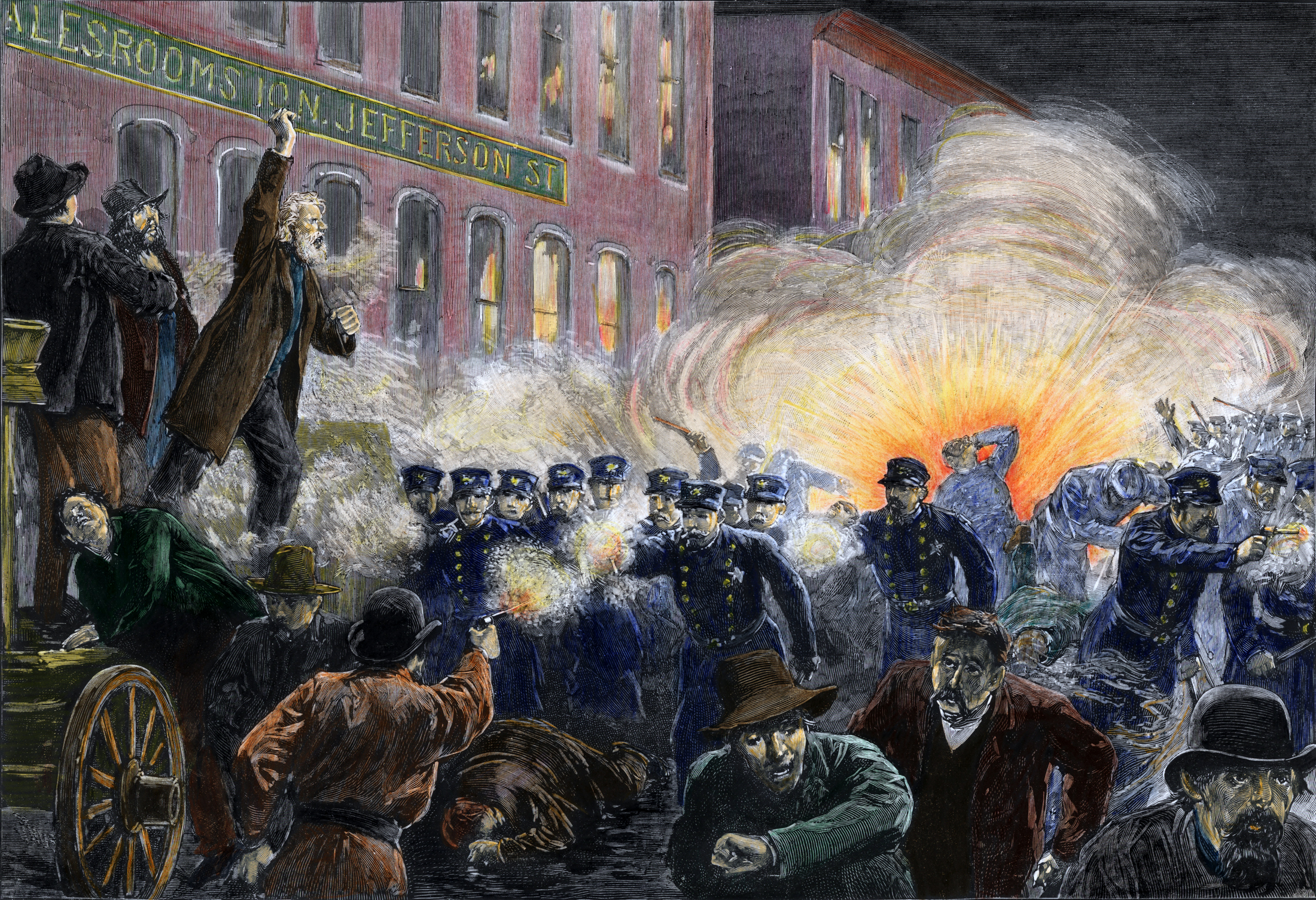 One of the Crane factory buildings during the Haymarket Riot.
Drawn by T. Thulstrup
Harper’s Weekly
May 15, 1886.

The statue and a new base that will have space to accommodate more mounted plaques will return before Labor Day in 2017, said Matt Edlen, director of acquisitions and development for Gerding Edlen Development Co., which is building the nearby development. He said the company worked with the city and the monument artist, Mary Brogger, on the statue’s removal and return.

Construction has started on the project to build a 14-story apartment building with 199 units and 3,000 square feet of ground-floor retail space. It will feature a rooftop pool, a penthouse gym and a 15,000-square-foot crop-producing urban farm, Edlen said. An existing office building built in the 1800s before the Great Chicago Fire also is to be preserved and returned to its original state by removing additions built over the last 150 years, he said. 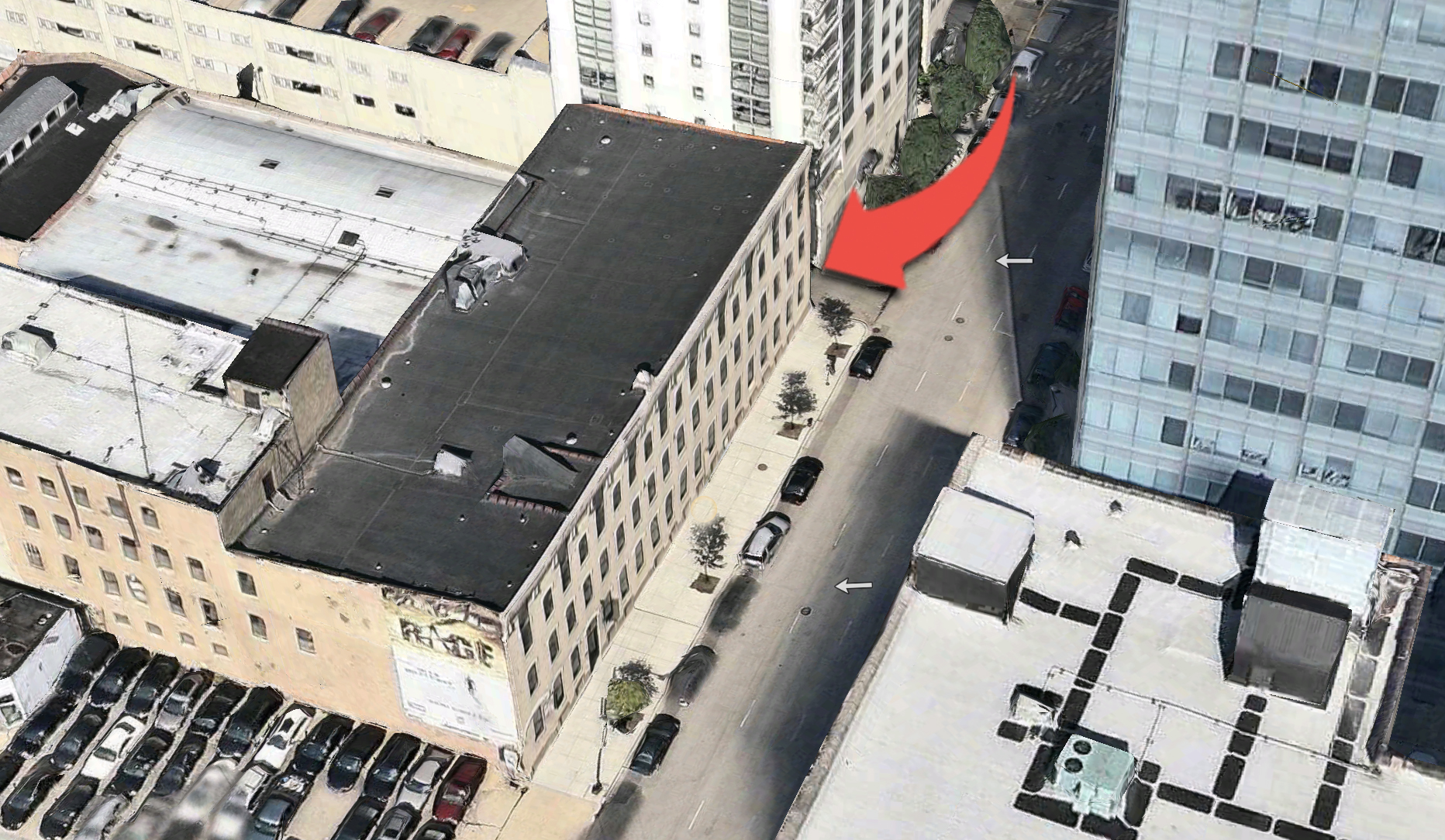 The residential tower will be set back 45 feet from the street with a small pocket park as a backdrop for the statue, he said.

The monument depicts a wagon used as a podium for speakers during a rally on May 4, 1886, about labor issues and workers’ deaths. The rally turned deadly when a bomb was thrown, which killed eight police officers and at least four civilians. Last month, before the sculpture was relocated, protesters from various labor unions held demonstrations at the site for workers’ rights and immigration reform. 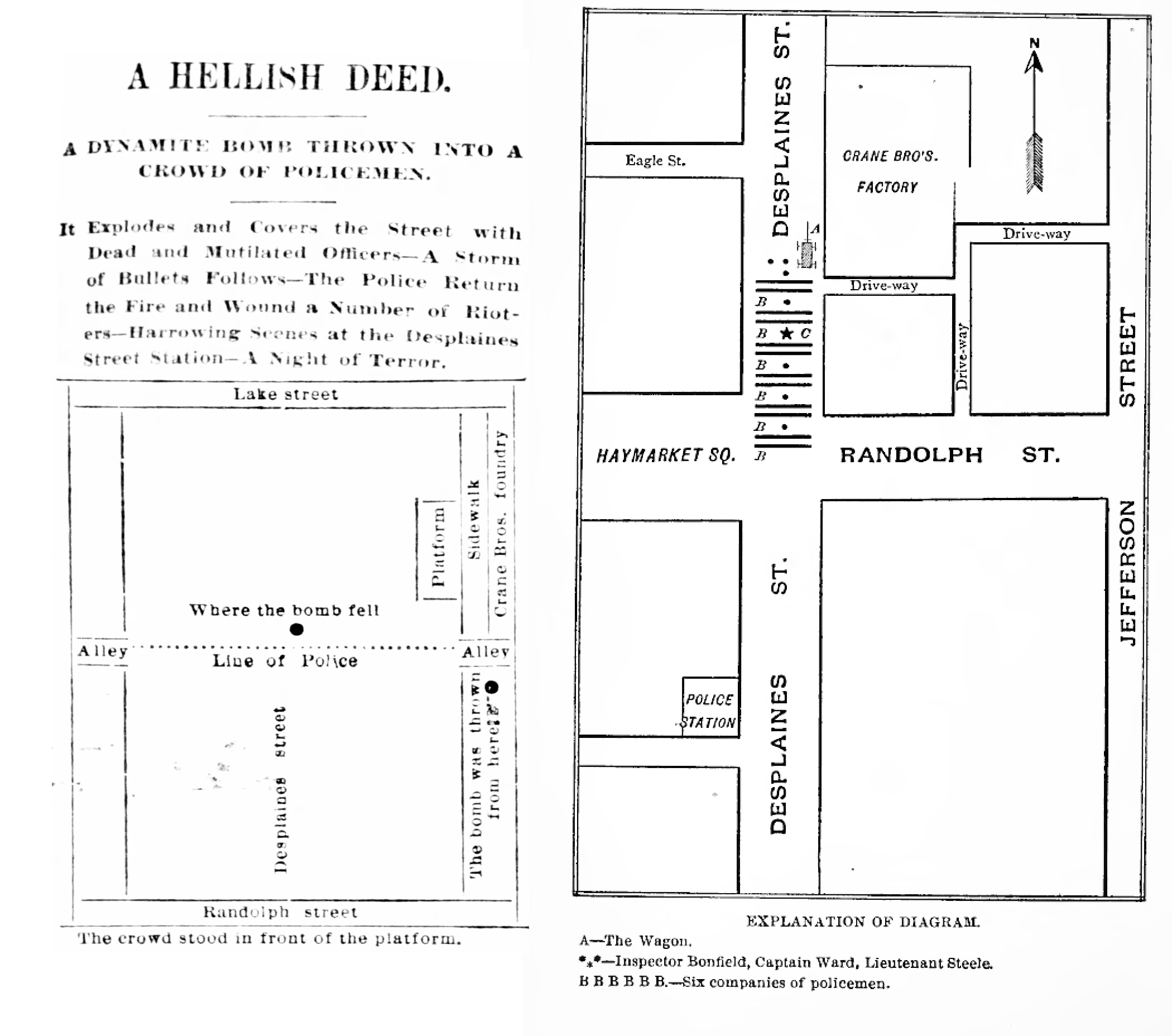