The Prairie Farmer company have just removed to their new building, on Monroe street, recently erected for their use. by Dr. R. L. Rea, of this city, at a cost of $30,000, and we herewith present an elegant engraving of its front elevation. There are really two buildings, both of brick, and constructed in the most substantial manner. The lot upon which they stand is one hundred and eighty-five feet in depth, by twenty-five in width. The rear building faces upon the alley, between Monroe and Adams streets, and is only connected with the main, or front building by a covered bridge, uniting the second floors. It is four stories and basement in height, fifty feet in length and twenty-five in width. The main building is of the same height and width, and one hundred and ten feet in depth, with front of Illinois and Athena marble, which, in style and finish, is equal to that of almost any structure in the city. The engraving gives an excellent idea of it as seen from the street in front. Nearly the whole of this building is occupied by The Prairie Farmer, an agricultural journal that has attained a high position among publications of its kind. Its top is surmounted by a sheaf of wheat, as seen in the engraving, which indicates, allegorically, the character of the paper for which it was erected. 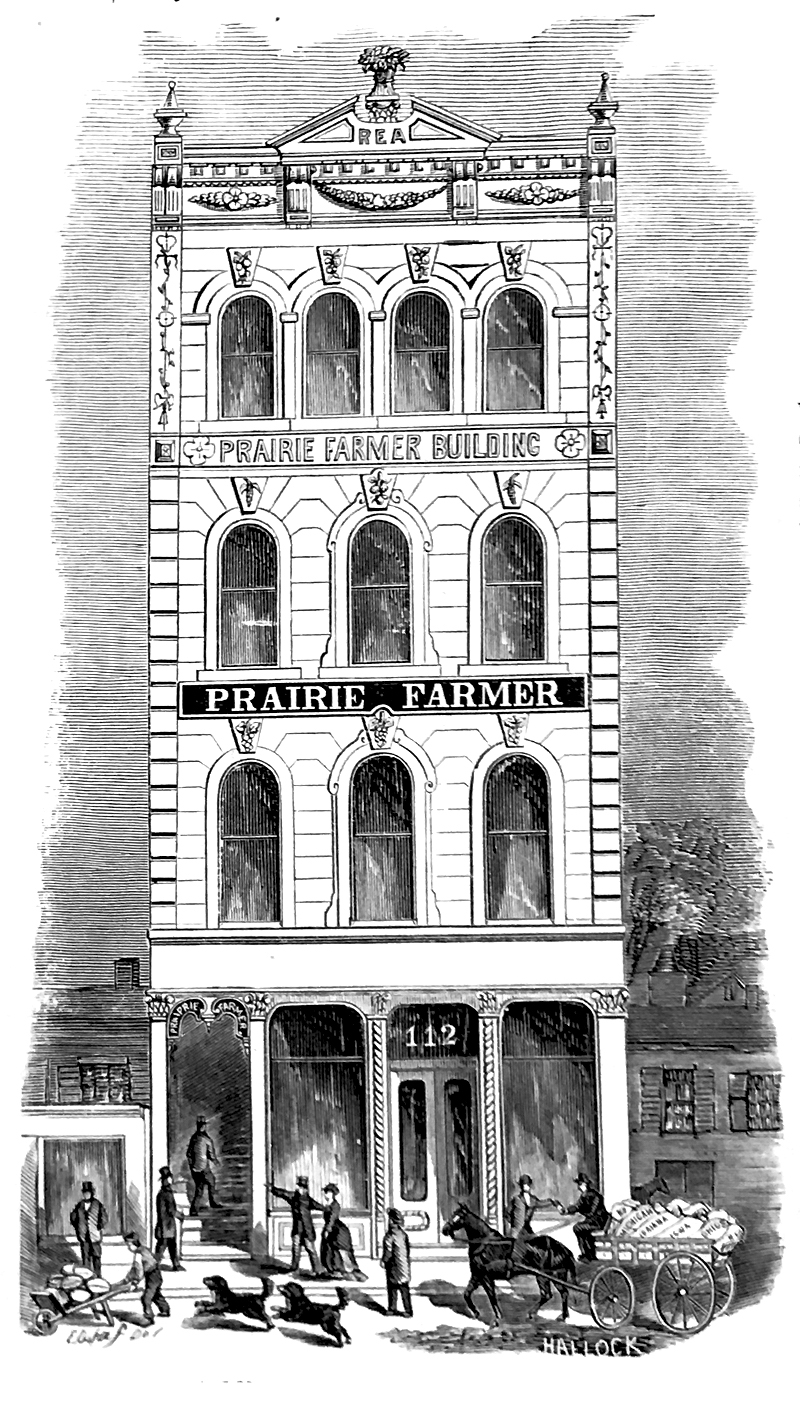 The Story of Chicago, In Connection with the Printing Business, 1912
PRAIRIE FARMER, 1848-1912: Devoted to the interests of argiculture, the Prairie Farmer has been an important influence in the special field it covers. A number of prominent agriculturists have been associated with the publication during its history. B. D. Butler is publisher and president of the company

Prairie Farmer, the local production information authority for farmers across the state of Illinois, is celebrating 175 years of continuous publishing, making it the oldest magazine in America. 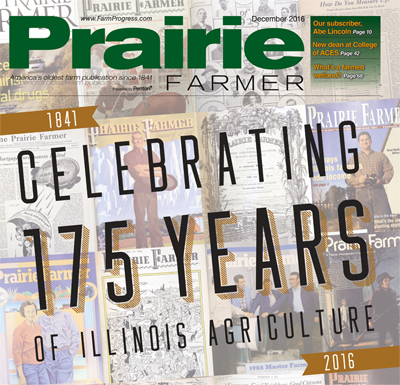 “We’re very proud to have served Illinois agriculture for all of those years,” said Holly Spangler, Prairie Farmer editor. “Our mission has never wavered: We exist for farmers. We’re here to help them build a better farm, a better environment, a better community and a better family.”

Prairie Farmer traces its roots to 1841 when entrepreneur John S. Wright founded The Union Agriculturist and Western Prairie Farmer, now known as Prairie Farmer, in Chicago as pioneers made their way across the prairie and settled new ground to begin searching out the crops that would ultimately make Illinois farmland some of the most prolific in the entire world.

“Pioneers were breaking ground on the prairie and the soil was different from what they knew back east. The weather was different and the crops responded differently,” Spangler explained. “Wright saw a need to share news and information with those new prairie farmers, and to let them share information with each other.”

“One of the fascinating things we learned in poring over archival volumes is that Wright founded Prairie Farmer in the wake of a fiercely partisan presidential election between Martin Van Buren and William Henry Harrison. He wanted an agricultural paper that would be non?partisan and unpolitical,” Spangler said. “Then, just as today, for sure.”

The Prairie Farmer staff found further similarities in their research through 175 years of publications—including stories of fires and crop failures, of droughts and loss, and of death and war.

• Stories on pattern tiling from 1884.
• Coverage of the brand new automobiles presented &with thanks in 1948 to the breeders of the first hybrid corn.
• Editorials about county fairs that couldn’t get funding in 1933.
• Diagrams of proper corn root systems from 1876.
• Reports of farm mortgage foreclosures halted in 1933.
• Fiery editorial from 1948 asking, “We can raise good corn, but can we elect good men?”
• This headline from the same 1948 issue: “How can owners and tenants agree?”

“It would seem our problems aren’t so new, even over all these years,” Spangler added.

Prairie Farmer also boasts a famous subscriber. President Abraham Lincoln subscribed to and read Prairie Farmer. “We’re proud to influence opinion leaders in agriculture where people like President Lincoln not only read and learn about agriculture from Prairie Farmer, but also take that information to help shape the future of agriculture here in Illinois and throughout the United States,” Don Tourte, vice president and market leader for Penton Ag said. 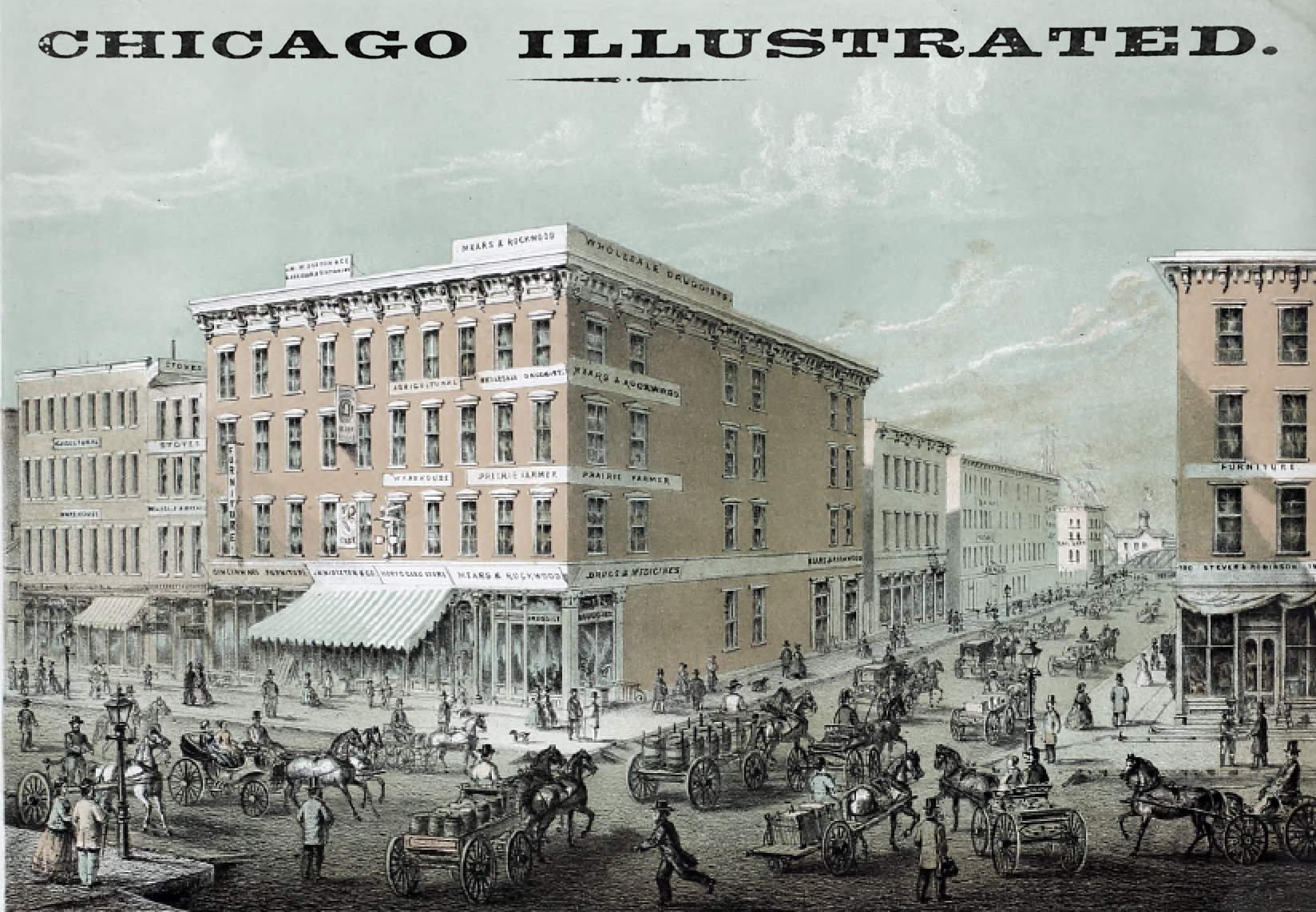 Previous home of the Prairie Farmer was at the northwest corner of Lake and Wells streets, on the third floor, No. 204 Lake street.