A MAGNIFICENT BLOCK PROJECTED.—We were shown yesterday at the office of Messrs. Van Osdel & Bauman, who are the architects, the plans for a magnificent block of wholesale to be erected in the coming season on the southeast corner of Wells and South water streets, on the lot which has been so long vacant, and has been owned by Allen Robbins, Esq. The building will be completed early in the spring. The contract for work has already taken by Messrs, Badger & Co. of New York, at $37,000. The carpenter work is to be done by the day under the supervision of the architects, Van Osdel & Bauman but the mason work is to let to to-day from the office at 10 o’clock. All our principal reporters were figuring yesterday on the expenses for the preparatory to bidding for the contract.

South Water Street, Chicago, From Wells to La Salle Sts.
The Iron Building, erected in ’56, by A. Robbins, Esq., in the foreground.

The cost of the block will be $80,000. The fronts will be of iron, painted the color of Athens sandstone, and it will in reality be a place for business. It will be eighty feet on South Water by one hundred and fifty on Wells, with two stores on each street; those on Wells street fifty feet by one hundred, and those on the latter twenty-five by eighty. The building will be five stories high above basement. Its building will be self-supporting, without walls, the first building of the kind in Chicago. The two fronts will be alike, Corinthian columns and capitals standing in all the in ??? between the windows. There will be about one hundred and seventy columns and they are to be one foot in diameter at the base. The elevation will be seventy feet from the sidewalk, and the fronts will have a most imposing appearance. 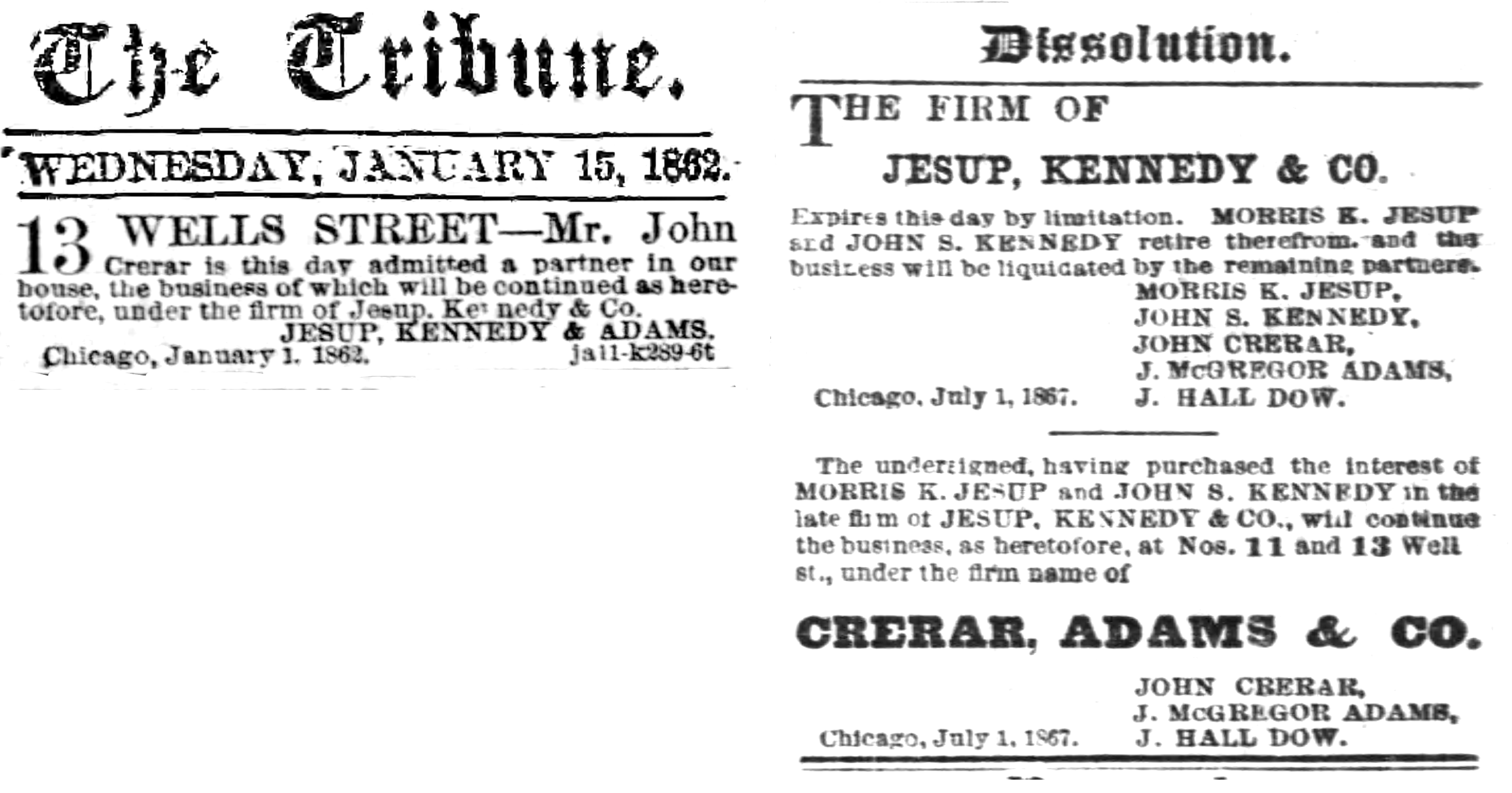 TWINE AND CORDAGE.—We call the attention to our readers to the advertisement of Gilbert, Hubbard & Co., dealers in Cordage and Twine, Nos. 205 and 207 South Water street, in “Robbins Iron Block.” Flags, banners and ensigns are in great demand, and we would refer political clubs and all others in want of these necessary “campaign documents” to their house, and to the fact that they have on hand and make to order at short notice, every variety of campaign banners and flags. They keep the heaviest stock to be found west of New York of twines, cordage and heavy cotton goods, and our friends will do well to order of them, and reap the advantage always to be obtained by purchasing where a large stock and full assortment is kept at all times. Their supply of what Horace Greeley calls “neckweed,” (Known in commercial parlance as rope,) is extensive, and we prophecy for them large orders from disappointed politicians about the middle of November; and, by the way, we would suggest to Giolbert, Hubbard & Co. the propriety of having a lot of it cut into lengths—and the ends knotted. 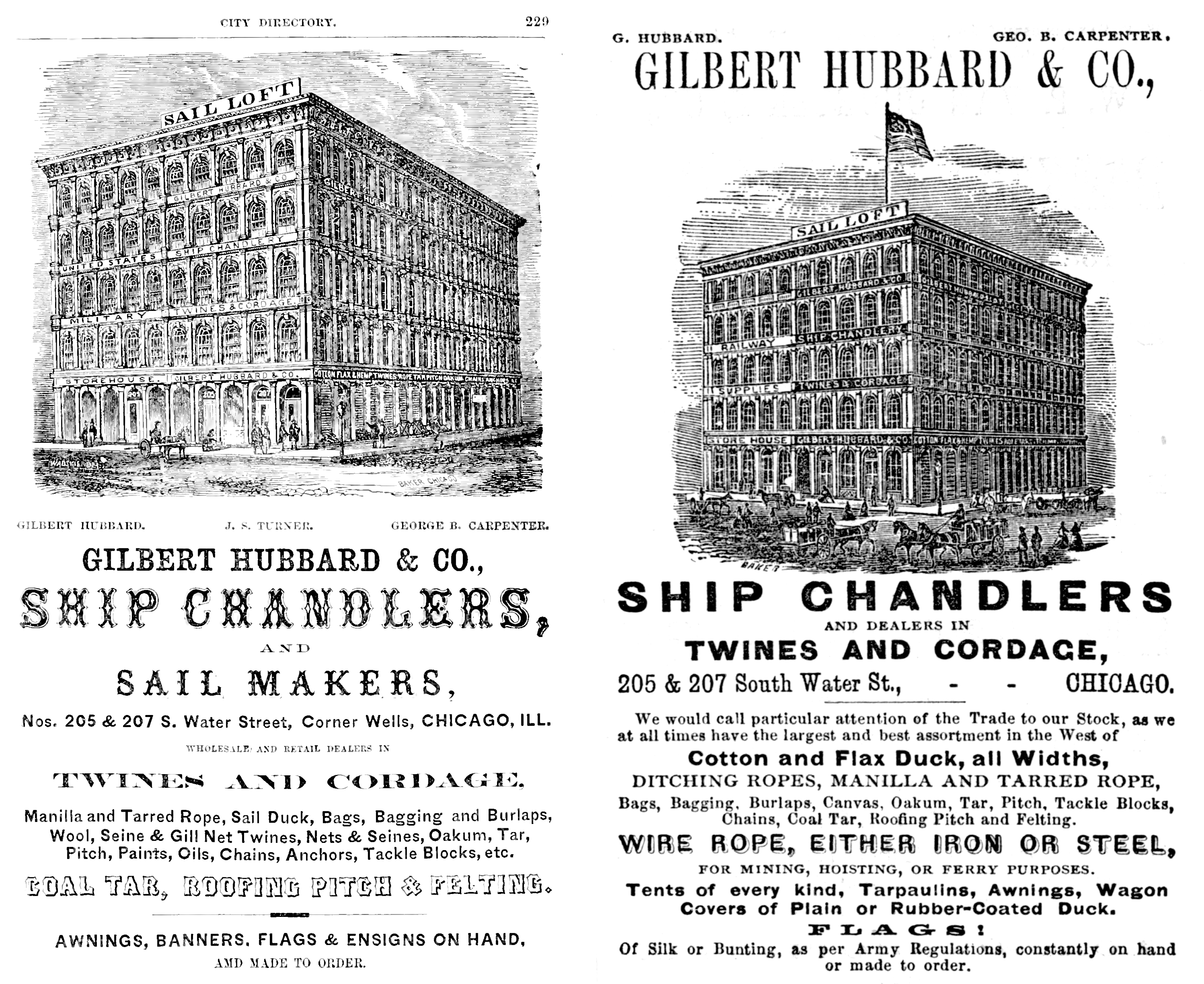 RAISING AN IRON BLOCK OF BUILDINGS.
The largest job of building raising ever effected has just been completed in this city by Messrs. Hollingsworth & Coughlin, in the elevation of the Robbins’ iron block, corner of Wells and South Water streets, to grade, a height of twenty-seven and a half inches. This block is very solidly constructed, of iron and heavy masonry; is five stories in height, eighty feet in width, and one hundred and fifty in depth, and with the immense stock of merchandise it contains, is calculated to weigh at least twenty-seven thousand tons. In addition to this mountain weight, the stone sidewalks, two hundred and thirty feet in length, have been raised with the building, and the whole has been done without the slightest crack or damage and so quietly that there has never been apparent any evidence that its foundation consisted of jackscrews and not of solid stone and bricks. To effect the truly Herculean task, the contractors have employed no less than one thousand five hundred and eighty jack-screws and four hundred thousand feet of lumber, and with these appliances have done it all in the short space of twenty-one days from the time when they first got possession on the premises. This positively wonderful feat well establishes the confidence hitherto felt by the property owners and builders of Chicago in the ability of Messrs. Hollingsworth & Coughlin, to move anything movable and its success has already brought them offers to make a trip to Paris, France, for the moving of some heavy blocks of buildings there which European mechanics frankly confess to be beyond their power. It has often been said that American mechanics only wish to know what is to be done, and they will find a means of doing it, but a stronger exemplification of this has never been offered than in the present instance, and after this the story of the man who “went back and drawed the cellar too” can scarcely be deemed impossible.

It may not be out of place that the architect of the work—J.M. Van Osdel, Esq.—than whom there is not a more particular man in the business, has only visited the scene three times since the commencement of the work.

THE BUILDINGS OF THE ROBBINS’ ESTATE.
Among the most imposing of all our strictly mercantile structures are the two buildings of the Robbins estate, situated respectively at the northwest corner of Lake street and Fifth avenue, and at the southeast corner of South Water street and Fifth avenue, as shown in our illustrations this month. These edifices are first-class in every respect, have been displayed in their general design. 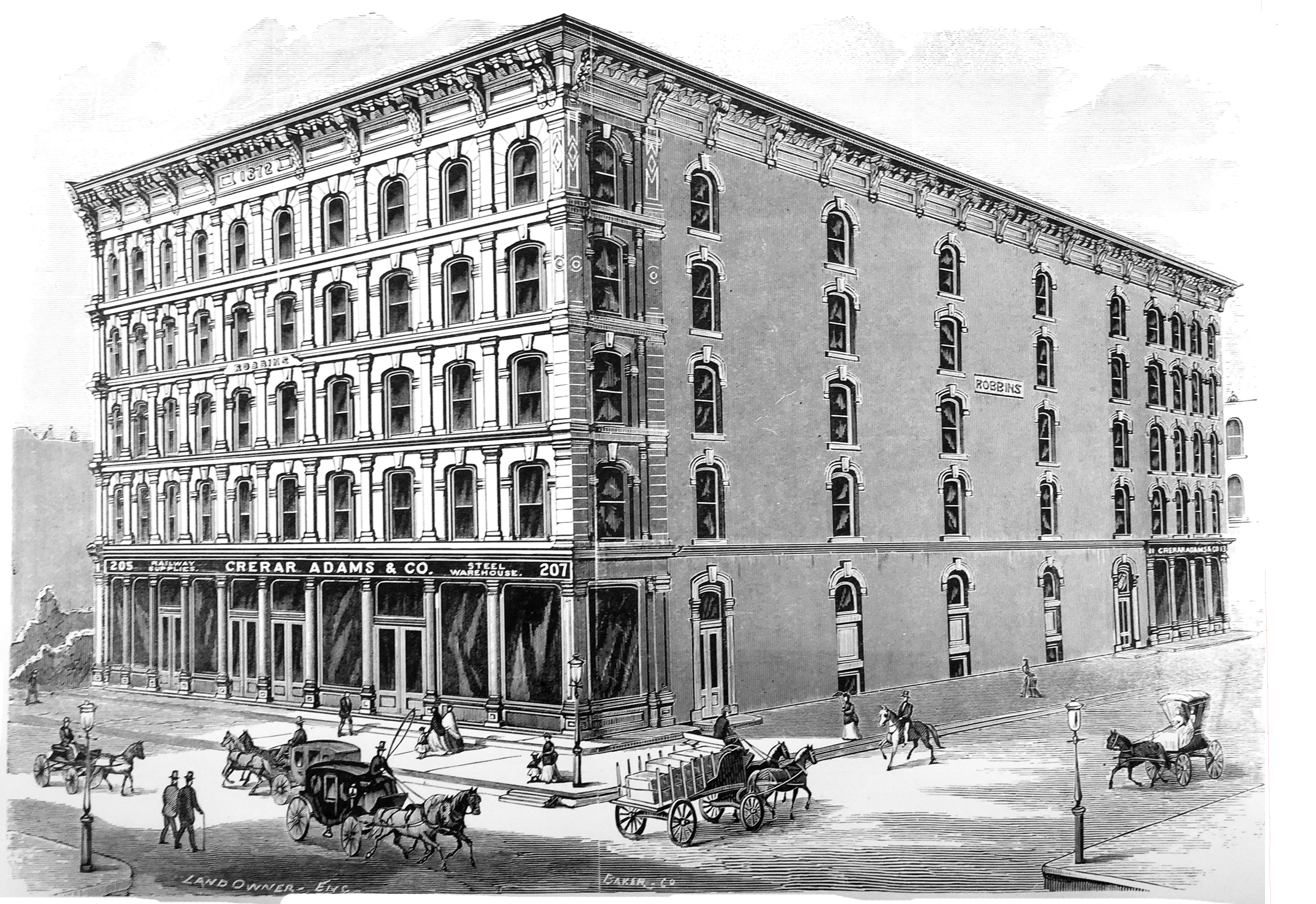 Excerpted from Sixty Years a Builder, The Autobiography of Henry Ericsson, 1942

Having given a glimpse of the stature of Van Osdel, I wish now to through with leaf his records, beginning 1856 the records buried under the Palmer House. The book opens with the iron front building for Allen Robbins at the southeast corner of South Water and Wells streets. One of Allen Robbins’ first tasks when he came to Chicago was to raise the money with which to build the little Campbellite church up through which Bertha Honore, Mrs. Potter Palmer, came as a girl. The Allen Robbins “Block of Stores” was the most imposing structure in what was the heart of the old city. Into the Robbins block, Gilbert Hubbard and George B. Carpenter brought their ship chandlery business, where it remained until the building went up in the flames of 1871. 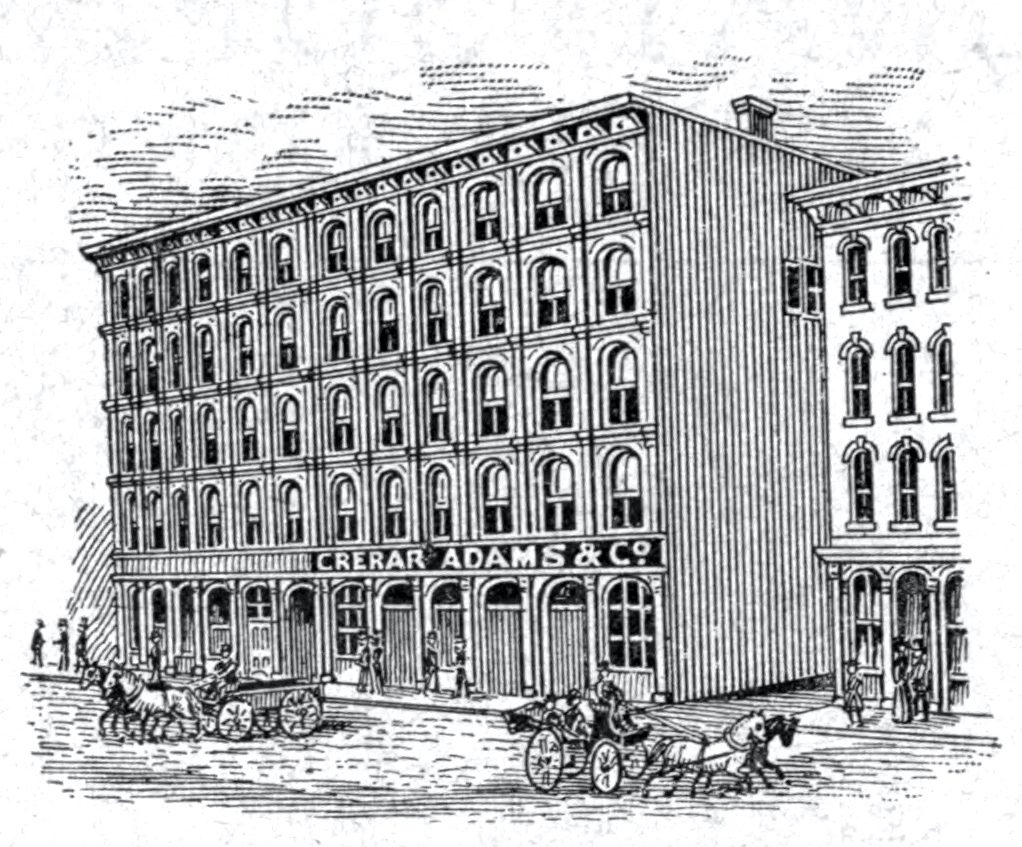 The Robbins Building an iron-front building by John Van Osdel commissioned by Allen Robbins for the city’s first iron structure. It was to be a combination of store, offices, warehouse at the SE corner of South Water (Wacker) and Wells streets, then one of the city’s busiest intersections. Little is known about Robbins. It is clear that he never intended to occupy the building but constructed it as a real estate investment.

For Robbins’ building, Van Osdel selected a Renaissance style front with ten great round-arched windows extending across each floor of the Water Street facade and eighteen spanning each floor on the Wells side. The strength of the iron called for little more than the width of a fluted column between windows. With five stories of wide arched windows rising one tier above the other the nearly all glass surface must have glistened in the afternoon sun while allowing a flood of light to bathe the interior.

Van Osdel employed a favorite architectural device at the time—he made each story shorter than the one beneath it. Some say this was to create the illusion of greater height, others allege that the lower floors commanded the highest rents and deserved the greater dignity afforded by high ceilings and spaciousness.

The Robbins Building represented an advance in building technology in Chicago. The commercial new buildings that lined the business streets of American cities at this time typically had side and brick walls of common brick to carry the load of wooden beams, joints, and flooring. Slender cast iron columns supported the floors in wide-spanned interior spaces. The fronts of such buildings, whether made of stone or cast iron, supported themselves and nothing else. This was the case of the Rollins Building, which occupied a corner lot and therefore had two facades. In this instance the two iron fronts supported not only themselves, but also some of the floor loads and thus created, in effect, an exterior iron frame. This principal would later be more fully explored as architects experimented with ways ti build higher structure. Indeed, a contemporary version of an exterior iron frame can be seen in the John Hancock Building erected on upper Michigan Avenue in 1968.

Painted a light color, it looked like a Venetian palazzo and was certainly a departure in scale, ornamentation, and lightness of appearance from the stone, brick and wooden commercial buildings of mid-century Chicago.

Until the Great Fire, the large firm of Gilbert, Hubbard & Co.. ship chandlers, occupied this building. No photograph has come to light, but the firm used a wood engraving of the building in the 1868 pocket-sized Guide to the City of Chicago to promote “twines and cordage, tents and tarpaulins, and horsecovers of plain or rubber coated duck constantly or made to order.”