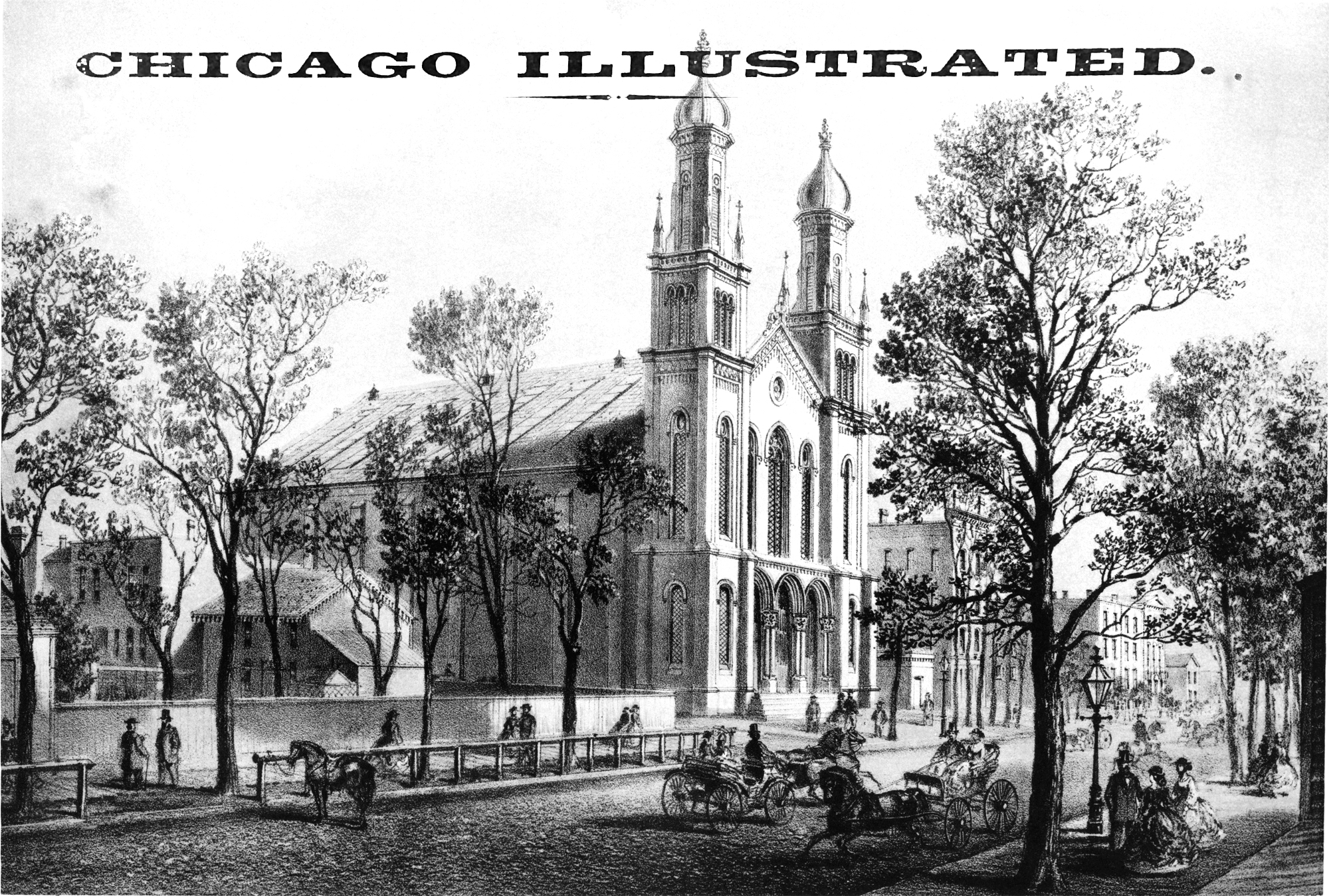 THIS edifice is built in the most substantial manner; not built to serve for a small period, and then (as has been frequently the case in Chicago) abandoned to business uses, while the congregation erect elsewhere another building for religious purposes. It is located on Jackson street, fronting north, between Wabash and Michigan avenues. It has a front of seventy-one feet, and is one hundred and fifty feet deep. The front and the lower sections of the towers are built of Athens stone, and the side and rear walls of brick. Between the towers, in front, is an arched arcade, uniting in the entrance spaciousness and effectiveness. This vestibule is sixteen feet deep, and the auditorium sixty-five feet wide by one hundred and twenty-five feet in depth. The stairs leading to the galleries rise from the vestibule on each side of the outer entrance of the building. The church contains on its main floor one thousand seats, and in the galleries four hundred more. The interior of the building is handsomely frescoed and furnished, and the heating and lighting arrangements are admirable. The chancel is at the south end of the church, and has an octagonal shape, with a grooved arch, arched ceiling, and is lighted by stained-glass windows, appropriately emblazoned. The auditorium is lighted exclusively from the roof, there being no side windows. The effect is pleasing, notwithstanding the degree of solemnity which is produced. This effect, however, is only visible during the day. In the evening the building is handsomely lighted in every part, with gas-burners arranged with great taste, and most effectively. T. V. Wadskier, Esq., of Chicago, was the architect.

This church, has long been remarkable for the attention given to its music. The choir has always ranked with the first in the in the city, and many of the leading vocalists, male and female, of Chicago, have been members of Trinity Church. Independent of the strictly religious services of Trinity, the choir has always been of great attraction to the general public.

This building was commenced in August, 1860, and completed in the following spring. The site was purchased of Cyrenus Beers, Esq., and the corner-stone was laid on the 4th day of September, 1860, by Doctor Pratt, the rector, assisted by the clergy of the city. On the 16th day of June, 1861, divine service was for the first time celebrated in the building. The Church was at that time in debt, and could not be consecrated; this debt, however, was in the course of the succeeding years discharged, and on the 24th of April, 1864, the edifice was solemnly consecrated to the service of God by the Right Reverend Henry J. Whitehouse, Bishop of Illinois, assisted by several clergymen of this and other cities. The Reverend Nash Schenk, formerly pastor of the congregation, and now of Baltimore, preached on the occasion. The history of this building cannot be complete without briefly stating of the progress of the society.

At a meeting of St. James’s congregation, near the close of the year 1841, it was voted that an Episcopal Church upon the south side of the river was necessary, and very advisable; and some months later a parish, including the whole south division of the city, was established under the title of Trinity Church. The first election resulted in the choice of the following officers:
Senior Warden—J. Brinkerhoff; Junior Warden—S. J. Sherwood; Vestry—Cyrenus Beers, Charles Sauter, Caleb Morgan, Thomas Whitlock, and W. H. Brackett. The Reverend W. F. Walker, the rector of St. James, for a long time thereafter had both parishes under his charge, service being held in some building occupied temporarily for that purpose. In the spring of 1844, Mr. Walker resigned the rectorship of St. James, and became rector of Trinity. In June, 1844, the ceremony of laying the corner-stone of Trinity Church was performed by the Right Reverend Doctor Chase, Bishop of Illinois, assisted by several clergymen and device service was held for the first time on the 25th of August, 1844. This building is yet standing, and is located on Madison street, near Clark street. Mr. Walker continued rector until 1847, and was succeeded in September of that year by the Reverend William Barlow. In February, 1850, Mr. Barlow died, and was succeeded by the Reverend C. E. Swope, from St. James College, Maryland, who served until May, 1851, when the parish was divided, and that of Grace Church organized—Mr. Swope leaving Trinity had no permanent pastor; but in 1853, the Reverend W. A. Smallwood, D. D., was chosen, and entered upon his sacred duties in August of that year. He was succeeded, in 1857, by the Rev. Noah Schenk, who continued rector till January, 1860, when he accepted a call from Emanuel Church, Baltimore, whither he removed. The Reverend James Pratt, who at that time was a rector of a church in Philadelphia, was elected to succeed him, and entered upon his duties in March, 1860. During his pastorate the present church was projected, built, and completed. In March, 1863, owing to ill health, Doctor Pratt resigned, and was succeeded in October of the same year by the Reverend George D. Cummins, D. D., the present rector, who has recently been elected Assistant Bishop of the diocese of Kentucky. The Reverend G. C. Bird is the curate of the parish. Trinity Church has within a few years purchased the building formerly used as a synagogue of the Israelites, on Monroe street, and opened it as a free missionary church. 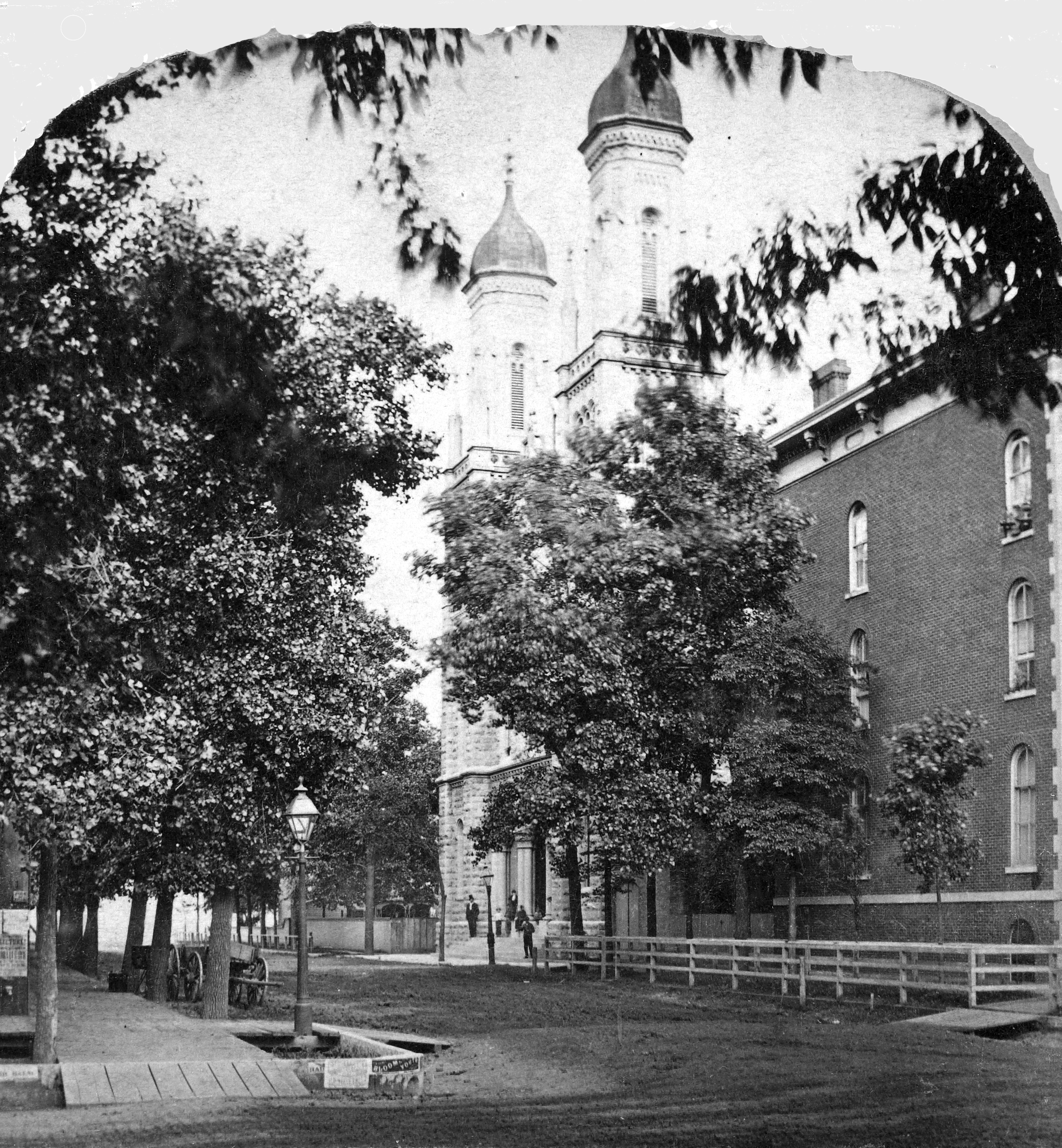 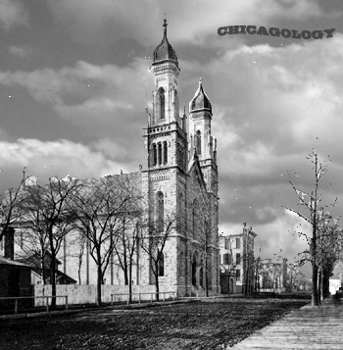