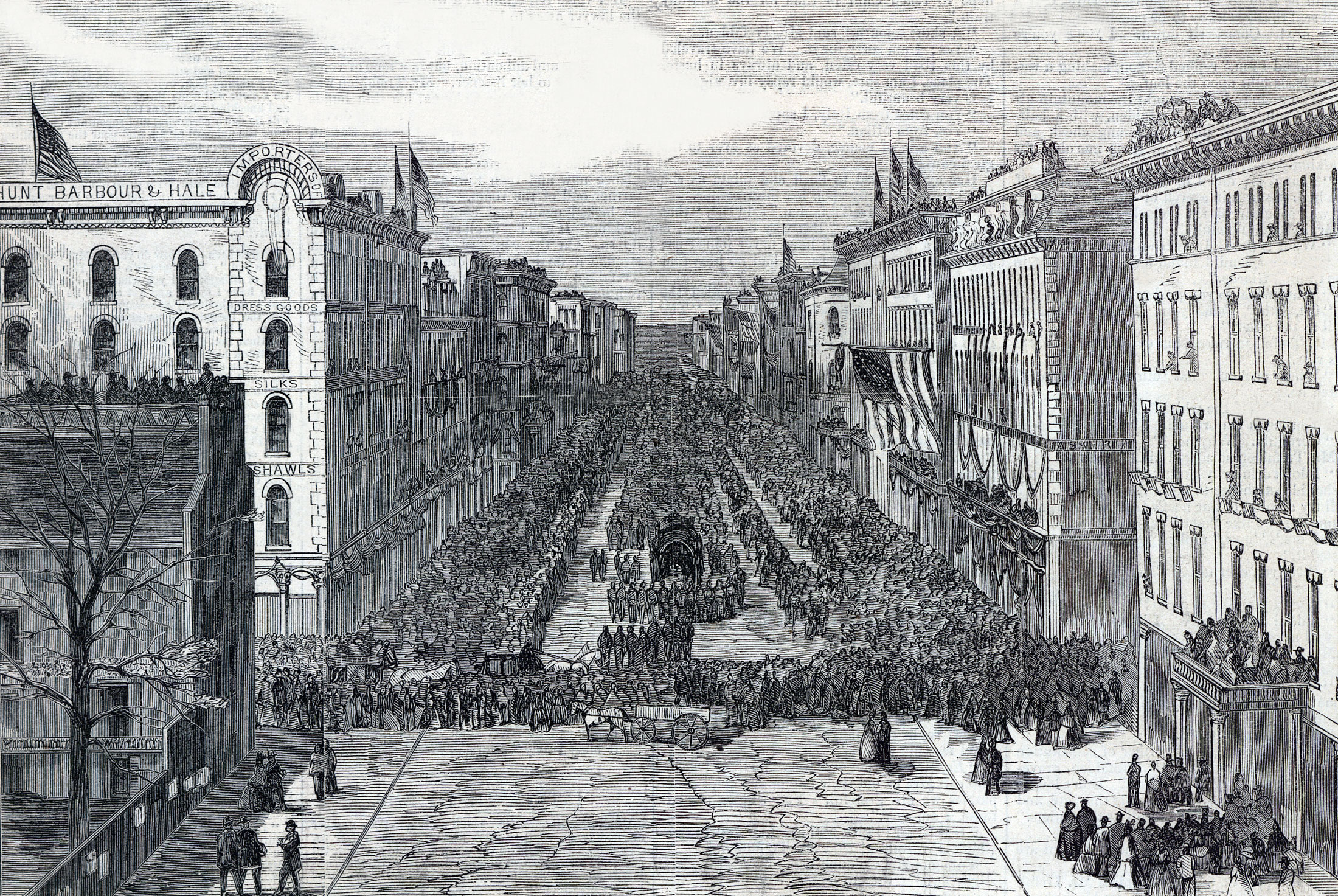 President Lincoln’s Funeral Procession in Chicago on 1 May 1865
Harper’s Weekly Magazine
May 27, 1865 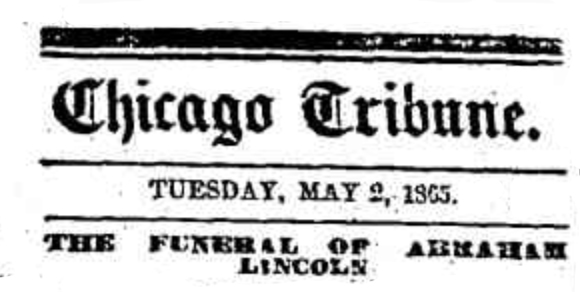 In all the continued and uninterrupted pageant which has accompanied the progress of the late President’s remains from Washington thus far, on their way to their final resting place, no community has done itself such peculiar honor as Chicago did yesterday by the vast magnitude, the perfect order and solemn beauty of the funeral procession. The most careful estimates by time and actual count show that thirty-six thousand people participated in the procession as members of organized military, civic, municipal, educational, religions, or other associations, apart from the immense numbers amounting to at least one hundred thousand citizens, who thronged the line of the procession from curb-stone to house top. New York, Brooklyn, and adjacent cities, numbering an aggregate population of one and a half million, or about eight times that of Chicago, although the procession exceeded as a pageant everything in their history, yet only turned out in proportion to their numbers, one-fourth as many as Chicago. The New York Herald, which seldom underestimates the magnificent pageants, of which that city has been the frequent scene, refers to the funeral procession there as larger than the Croton Water celebration, the Erie Canal celebration, the Harrison funeral, the Taylor funeral, the cable celebration, the Japanese reception, the Prince of Wales parade, and the war demonstrations of 1861 and March, 1865—all memorable in our municipal history and unsurpassed by any other city on the continent. Yet its estimate of the number participating in the procession is seventy-five thousand or but about twice as large as that in Chicago. Our line, nowhere less than four thousand four abreast, and moving in admirable order, and without any considerable pauses or delays, occupied over four hours in passing a given point. Indeed, we are assured by those who accompanied the mournful cortege, that in many respects not even the New York demonstration exceeded that of Chicago yesterday. 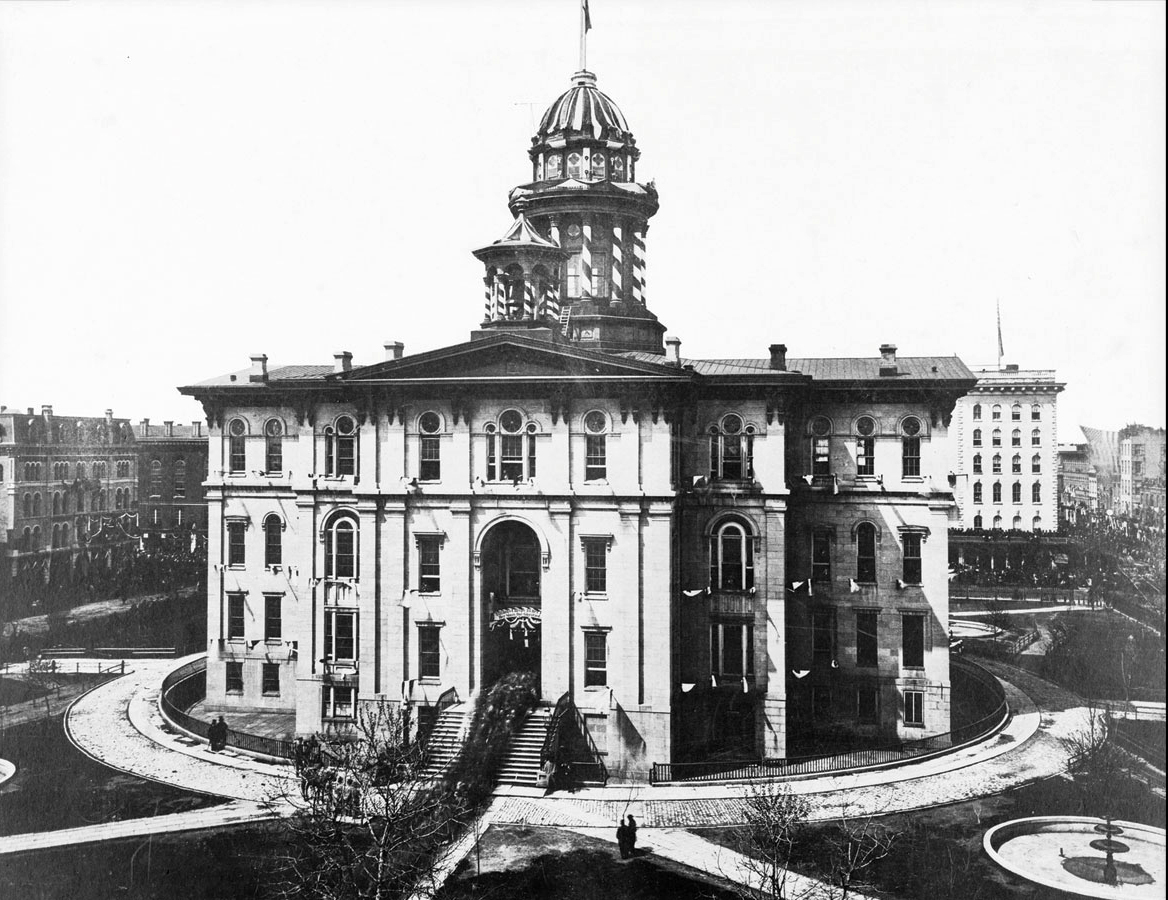 Photograph of Chicago’s City Hall taken in 1865 when the body of Abraham Lincoln was lying in state.
Chicago Daily News.

We present these facts in no spirit of boasting, which the solemnity of the occasion itself forbids, but simply to show that in behalf of Illinois’ noblest son, her metropolis has, as might have been expected, surpassed all others in the proofs of her devotion in death as in life. It is proper to state, also, that owing to the state of the weather during the day and night preceding, but four or five thousand, it is estimated, arrived by the trains, but a few of whom participated in the procession. Doubtless a large number will arrive to-day from other cities to view the remains of the lamented dead; but yesterday the display, both of the procession and spectators, consisted wholly of the population of Chicago, four-fifths of whom, of all ages, and of both sexes, undoubtedly participated in it. 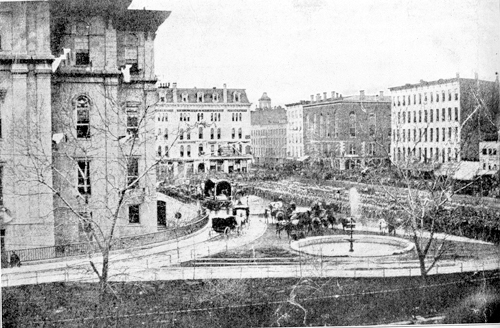 The significance of this demonstration, as of those which have preceded it in other cities, lies not in the pump and and pageantry of processions, but in the all-pervading sorrow of the masses. Thank God that He has endowed America with hearts alive to the emotion of a universal grief for such a man as Abraham Lincoln! The most touching evidences of public feeling are those which come from the children of toil and penury, the lowly and neglected ones of earth, whose tears flow with a holy and spontaneous affliction for the loss of a noble man, whom, perhaps, they had never seen. Behold how they loved him! If Mr. Lincoln ever had thoughts of public honor to surround his name after he should have passed from earth, he never could have dreamed of such precious memorials as these. The very solemnity of sorrow has attended his funeral rites, for the few, the rich and the poor, the learned and the unlearned, native and foreign born, white and black, old and young, male and female, have wept at his tomb. Where is the conqueror who gathered so majestic a host around his bier? Abraham Lincoln conquered the hearts of his countrymen, and the priceless possession in all coming ages is assured to him by the loving testimonials which attend his funeral. 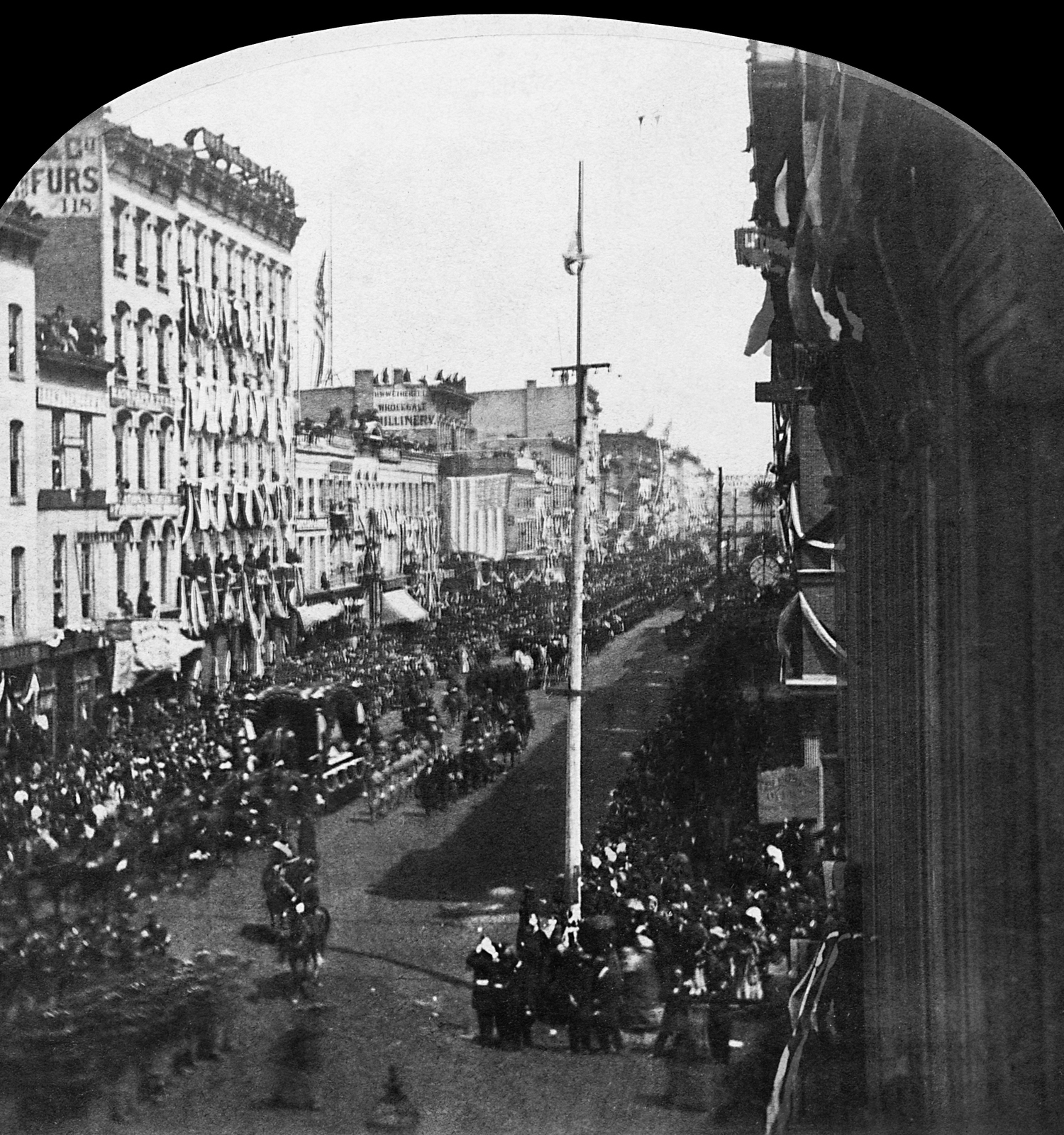 Lincoln’s Funeral Parade
The procession is seen here proceeding east on Lake Street from the corner of Clark Street. 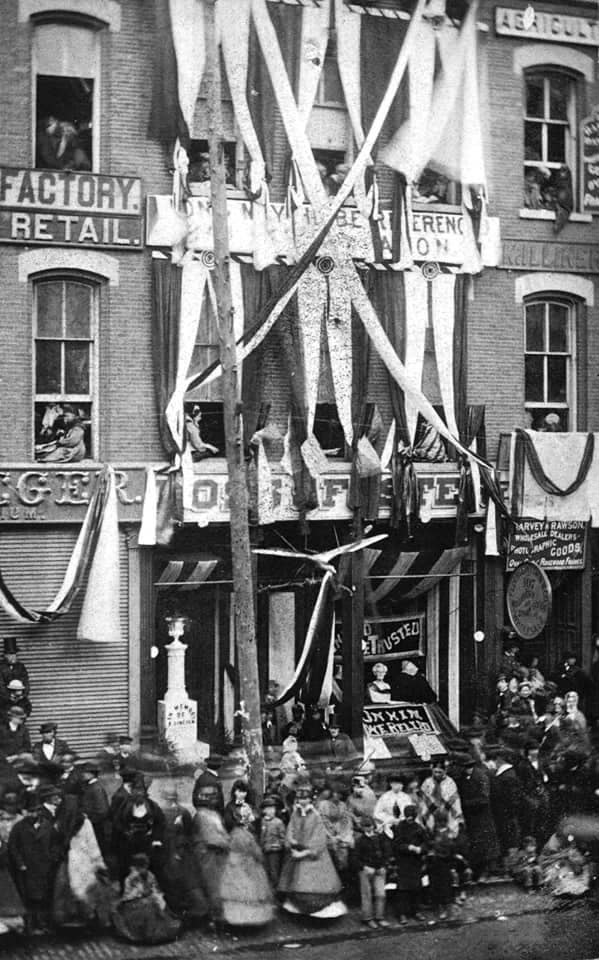 The Line of March.
The body was received from the line of the Michigan Central Railroad at Park Row, on the lake shore, one mile south of the depot, conveyed thence to Michigan avenue, along the avenue to Lake street, down Lake to Clark, on Clark to the east gate of the Court House square, and inside the square round to the south door of the Court House, in which the coffin was deposited; the different parts of the procession filed through the Court House, past the corpse, and left by the north door, breaking up into sections as they reached the street, and marching off to the places where they had gathered inn the morning.

The whole of the line of march was strongly roped in, and guarded along the edge of the sidewalks. Inside there were formed the different components of the procession in double solid column; the sidewalks and open spaces being reserved for spectators. It was at first intended to shutb the public off completely from the street along which the procession would move, but this was decided to be impracticable. Under the new arrangement thye people had room to pass, and owing to the very efficient measures taken to preserve order, there was no inconvenience among the immense crowds of people who thronged every avenue through which a sight of the cortege could possibly be gained, and stretched far back into the streets and alleys abutting on the line of the march.

Along Clark street from the corner of Lake to Washington, emblems of mourning were varied and most abundant. The front of every store and building was draped with the habiliments of grief, and many of them with great tastefulness. The telegraph office was decorated with flags and other mourning insignia, and the large flag suspended over Clark street was heavily bordered with crepe. The flag also in front of the Tribune was similarly decorated. The office itself was beautifully draped, and over the door in deep black was placed a memorial arch surmounted by a life size bust of the late President, crowned with laurel, and over all, an eagle with crepe about his neck and suspended from his talons. It was most tastefully arranged and the young gentlemen of the counting room by whom it was designed, and under whose directions it was erected, are deserving of great credit. All the buildings from Lake to Washington streets, were appropriately decorated. We cannot forbear alluding to the general good taste which distinguished the decorations of the Sherman House and the stores below. They were perfect in their appointments, all. The Michigan Southern & Northern Indiana, the New York and Erie and the Atlantic and Great Western Railway offices, were particularly noticeable. The pillars of the entrance of the Sherman House, on the east and south fronts, were wound in alternate strips of white and black, and with the drapery upon the cornice above presented a fine appearance.

The crowd was probably more dense on Lake, Clark, Washington, Randolph and Lasalle streets than on any other portion of the route traversed by the procession. As early as eight o’clock it was almost impossible for pedestrians to pass along these streets, so densely were they crowded. As the morning advanced the officers stationed at the corners of the streets were forced to stretch ropes, the entire distance from Washington to Lake, on both sides of Clark street, to keep back the throngs which insisted upon forcing their way into Clark street. 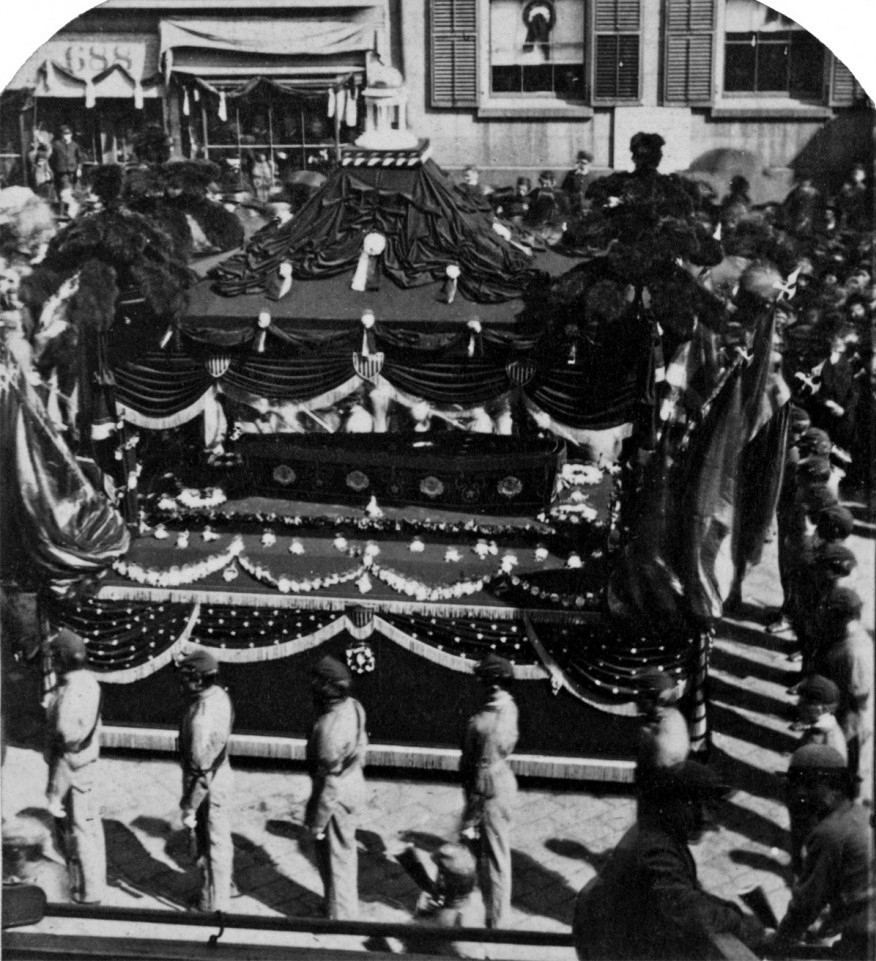 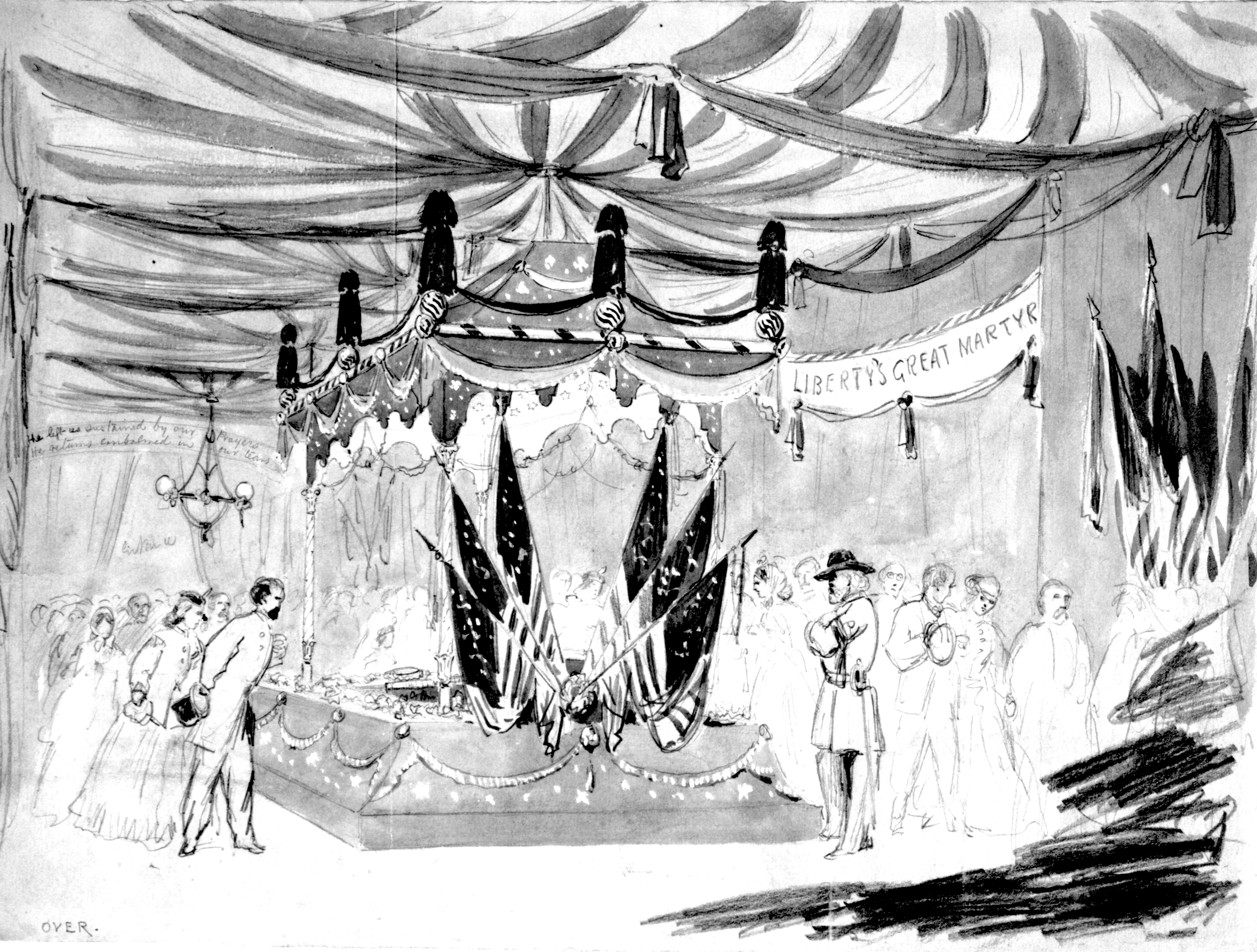 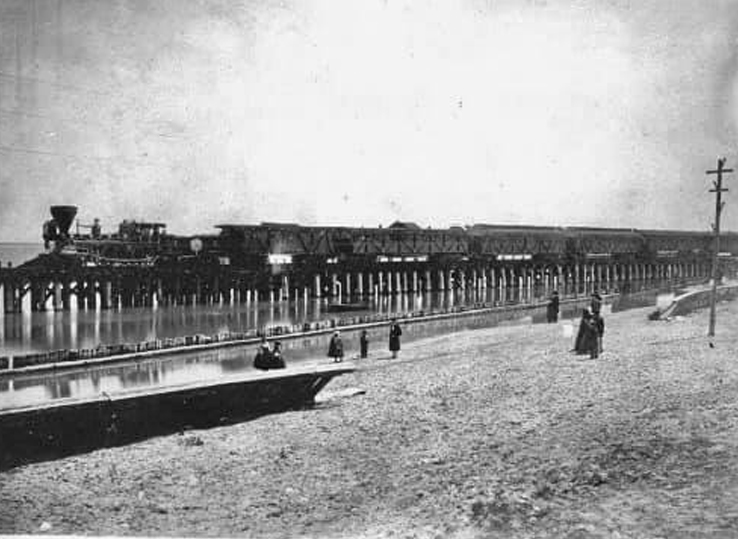 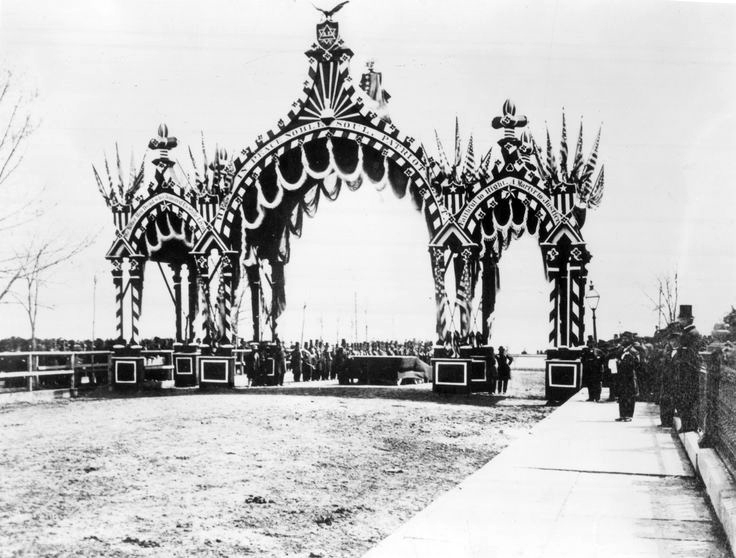 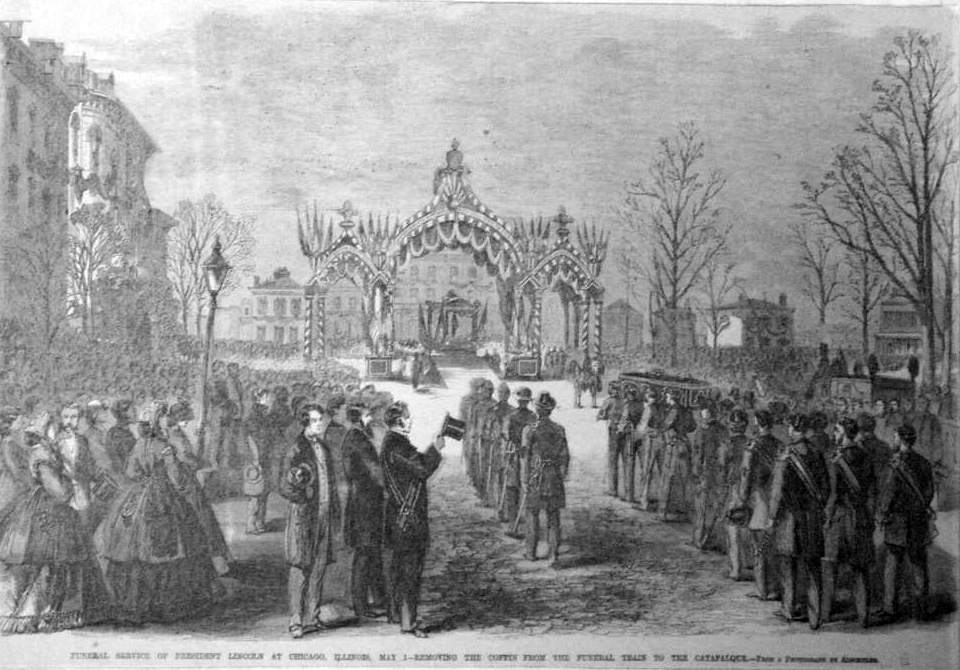 Guarding Lincoln’s Funeral Car on the Illinois Central tracks by Lake Michigan. The car was auctioned off to a private party, but was destroyed by a fire in 1911.

The Lincoln Special train left Washington on 21 April 1865 and by the time the train reached Chicago, the body was beginning to deterioate to the point where viewers were visibly distressed at its appearance. This train also introduced the Pullman luxury car. 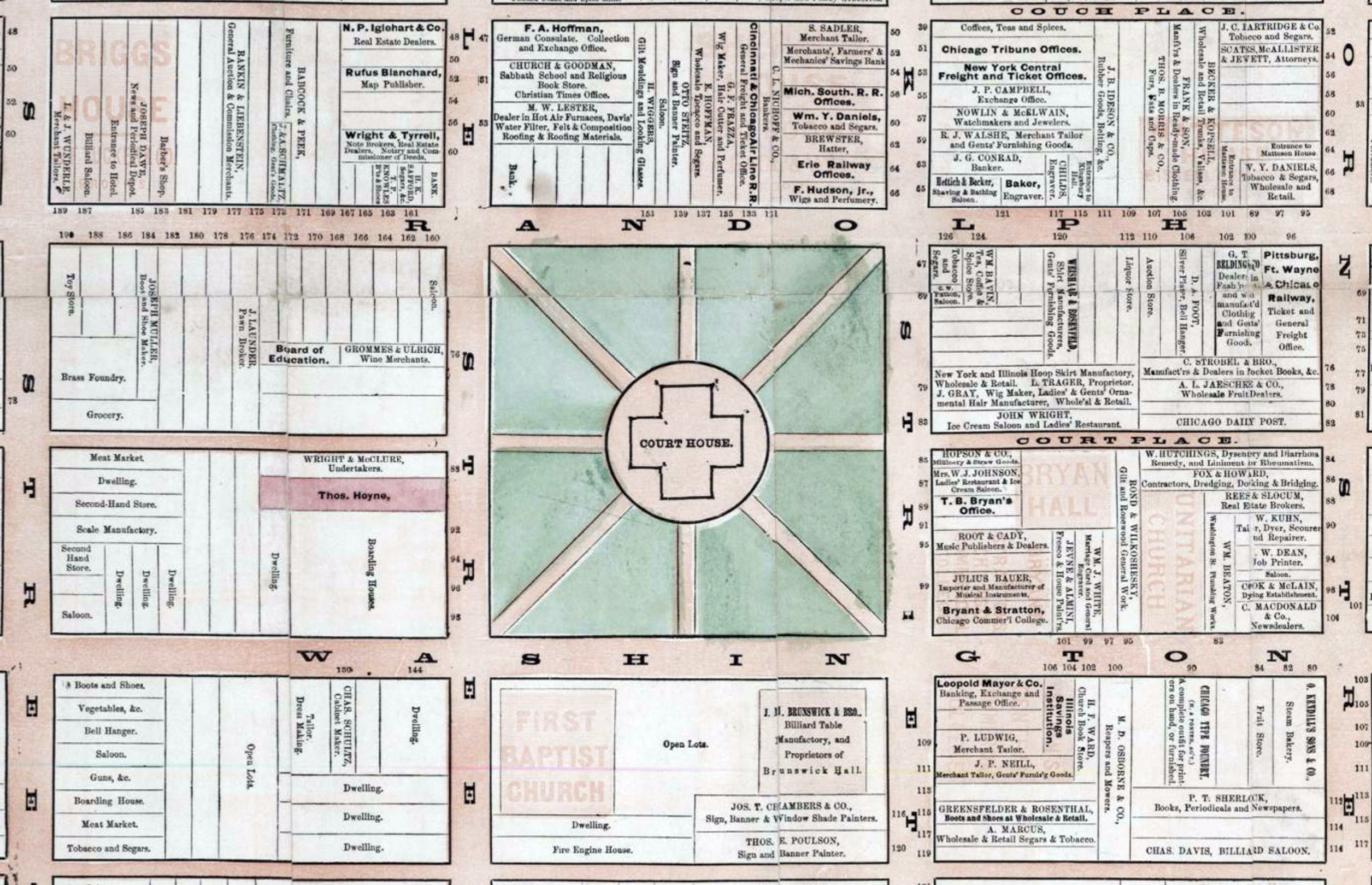 Courthouse
Created by E. Whitefield for the map-making concern of Rufus Blanchard
1862