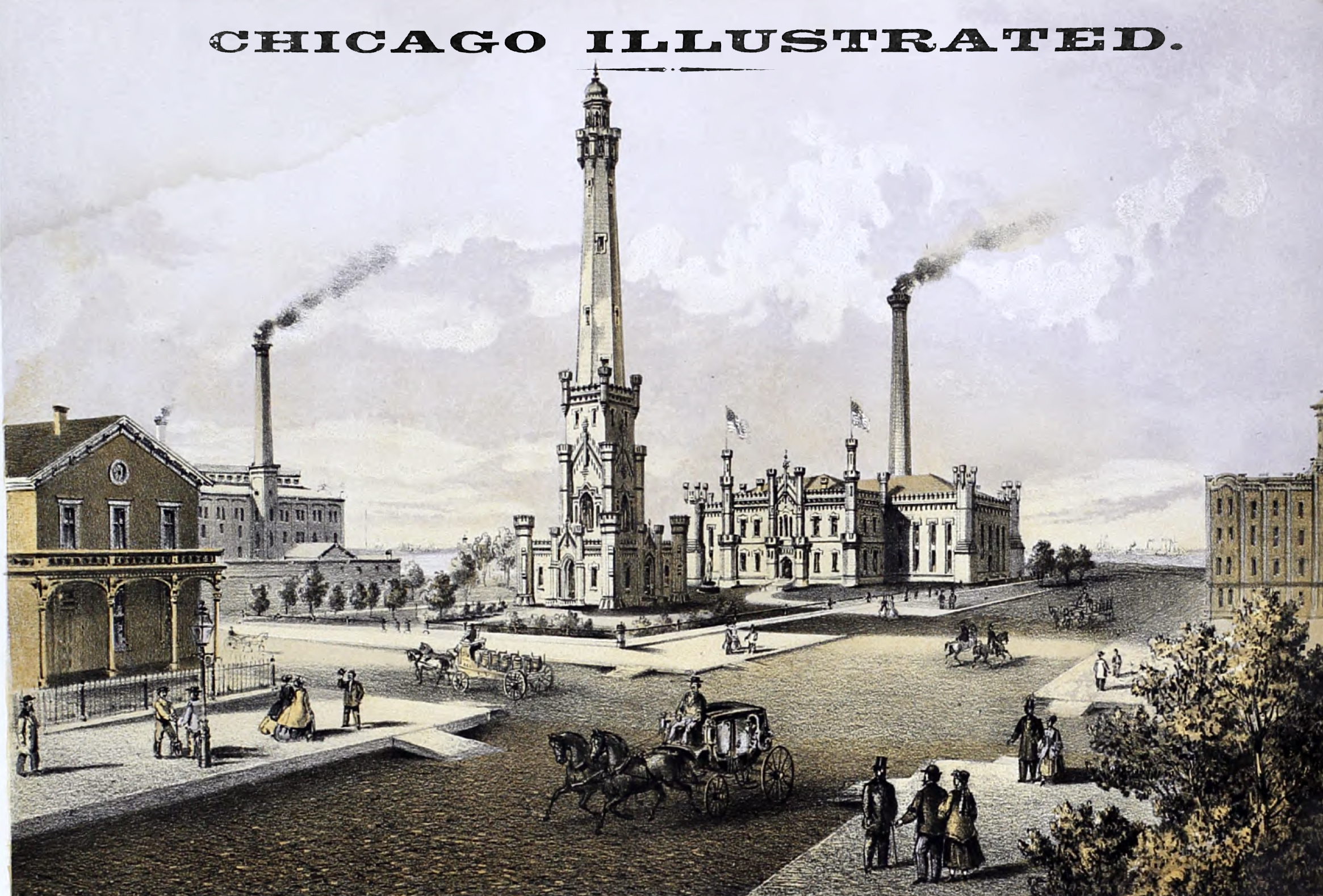 CHICAGO WATER WORKS.—This view of the new Water Works of Chicago is taken from the West. In a former number we gave a view of the crib, or the lake end of the tunnel through which the city obtains the water from the lake. The building to the right is of white stone, and includes boiler rooms, engine rooms, and all the necessary apartments and offices for the persons employed in the establishment. Within the area covered by this building are three wells, one square well thirty by fifteen feet, and twenty feet deep; one circular well thirty-one feet in diameter and twenty-one feet deep; and one thirty-eight feet in diameter and thirty feet deep. This last well is not used, but kept in reserve for the future need of the city. Two new engines of nine hundred horse-power stand over the other circular well, resting on foundations of masonry. A drift or horizontal shaft one hundred and fifty-four feet long and four feet in diameter has been laid from main shaft, or shore end of the tunnel, to the gate chamber. From this chamber a passage one hundred and nine feet long extends to several wells. These are forty feet below the surface. The gate chamber has a depth of forty-five feet, and a diameter of eighteen feet. Within are five partition walls of masonry, with an equal number of gates to regulate the flow of the water. The two new engines are estimated to have the power of forcing eighteen million gallons of water a day. The cylinders are each forty-five inches in diameter, with eight-foot stroke. The pumps which are placed in the wells below the cylinders are double-acting, and twenty-six feet in diameter, with eight feet stroke. The boiler is twenty feet long, and eleven feet six inches in diameter. The white stone stack or chimney is one hundred feet high. The engine rooms measure one hundred and eighty-six by sixty feet.

In the front of the picture is the Water Tower. It is of white stone, and measures one hundred and thirty feet high. The base is twenty-four feet square, within which a spiral stair-case heads to an observatory overlooking the city, and affording a view of the water column in the center. The column within the tower will be three feet in diameter, and is made of wrought iron. The base has six nozzles, three of which receive the water from the pumps, and the others distribute it through the mains which supply the city.

The successful completion of the tunnel was followed by the construction of these new buildings, and on 25th of March, 1867, the corner stone of the building was laid with imposing ceremonies by the Masonic fraternity, the Most Worshipful Grand Master Jerome R. Gorin officiating. A grand military, civic and Masonic procession took place, and thousands of people were present on the occasion. The oration was delivered by the Hon. John B. Rice, Mayor of Chicago. Addresses were also made by Ex-Mayor F. C. Sherman and others. Both gentlemen paid deserved compliments to the scientific skill of E. S. Chesbrough, Esq., the engineer who superintended the whole work.

The entire cost of the Chicago Works, including tunnel, buildings, machinery, and all the requisites, was two millions five hundred thousand dollars. W. W. Boyington, Esq., was the architect of the buildings.