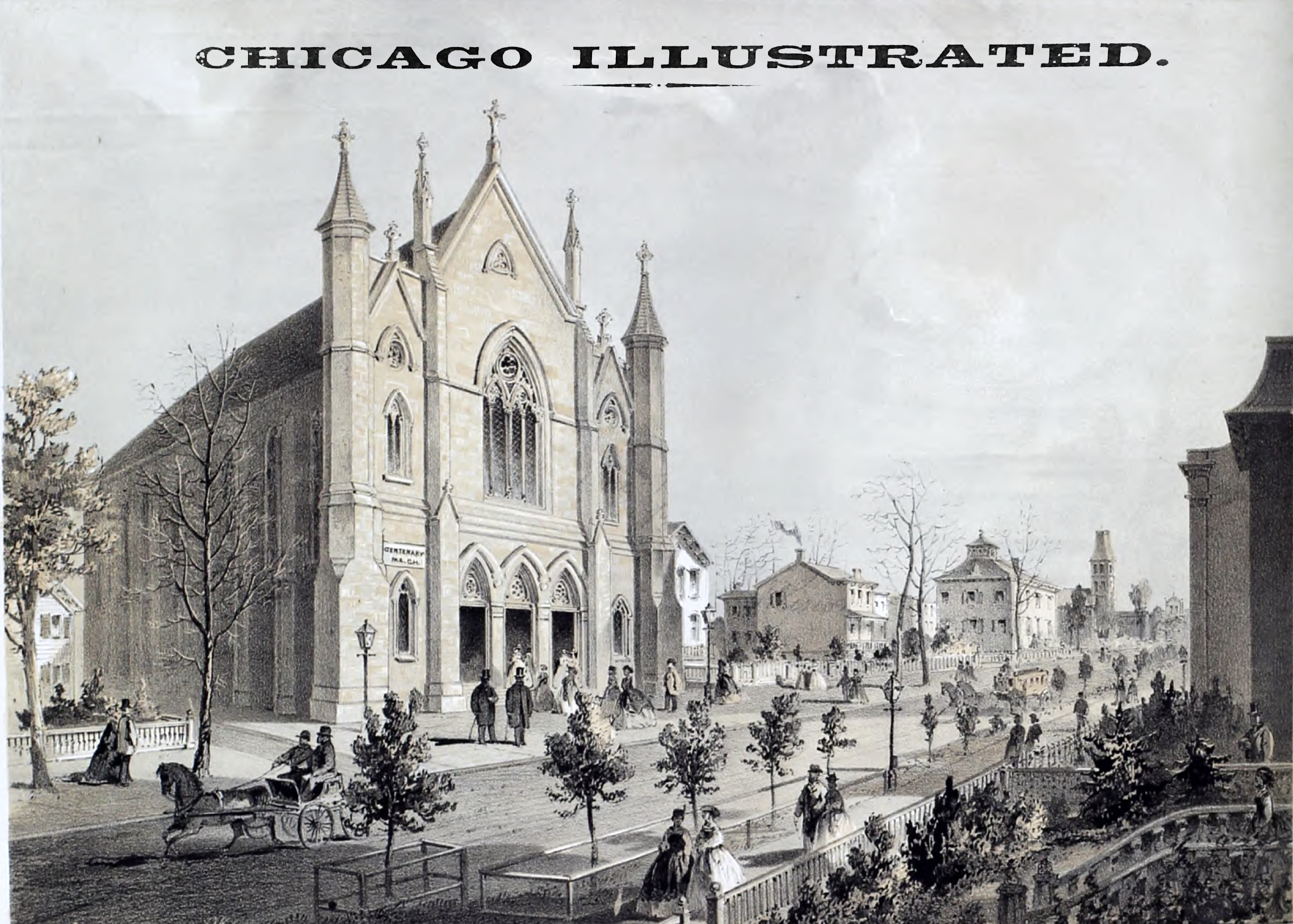 CENTENARY CHURCH—This imposing edifice is situated on West Monroe street, between Morgan and Aberdeen streets, and fronts south. The front, which is of the Gothic style, is of Athens marble, rock faced, and trimmed with bold, cut mouldings. The triple arched entrance, the strong outlines, the octagonal turrets and buttresses, the gables and stone crosses, all give a charming and harmon ions effect. The Gothic quadruple mullion window of beautifully stained glass, completes the symmetry and beauty of the whole.

The building is 76 feet front by 118 feet deep, exclusive of the buttresses. The vestibule. to which there are three entrances, is 12 by 76 feet. From this a spacious stairway leads to the auditorium above. The lower story is reached from the vestibule by an entry 12 feet wide, on one side is an Infant class room, and a Bible class room, each 26 by 28 feet. Passing further on, the entry reaches the smaller audience room, which measures 59 by 65 feet. At the north end of this room is a rostrum, from which can be viewed a comfortable and convenient sized room for public worship, and one of the finest Sunday School rooms in the city. The class rooms we have mentioned communicate with this room by folding doors, and when occasion needs, the whole can be thrown into one room. In this room is a very fine organ, and in the rear there is an apartment for a library. From the North-East corner of this floor there is a staircase leading to the main floor, and communicating with the Pastor’s study, Immediately over the library, and in the rear of the main auditorium. The same stairway, by a second flight, reaches to the choir gallery.

The lower story is above the level of the street and therefore admits of a spacious sub-basement, which is economically apportioned for very useful purposes. There is a complete suite of rooms for working, dining, dressing rooms, coal bunks, sinks and closets.

The minor audience room is handsomely and tastefully decorated and frescoed. The walls contain, in illuminated old English test, Scriptural mottoes, and are ornamented with vignettes of an appropriate significance. Bible history is beautifully illustrated by scenes portrayed upon the panels. The same style of decoration is to be found also in the class rooms, in the vestibule, and in the entries. The columns are neatly bronzed, and the floors carpeted.

The main floor or auditorium is not yet completed, and the dedication exercises, and the subsequent public worship by the congregation, have all taken place in the minor hall, which, when the main hall is completed, will be devoted to its original purpose, as a lecture and Sunday School room. The main hall, when finished, will be one of the most spacious and elegant temples of Chicago. This church is a noble monument of the zeal and energy of the Methodist body in Chicago.

The opening or dedicatory exercises were held on Sunday, February 17, 1867. There were three services—morning, conducted by Dr. T. M. Eddy; afternoon, by Dr. Hatfield; and evening, by Dr. Hitchcock; the Rev. C. H. Fowler, the pastor, assisting. Notwithstanding the severity of the season, the unfinished state of the building, and the comparatively limited accommodations, there was a large attendance at all the services. Dr. Eddy preached in the forenoon after which it was stated that the cost of the building; including the lot, to its then stage of completion, was $50,000; of which $40,000 had been subscribed and collected, leaving $10,000 to be raised to pay the arrears then due. After the sermon, $11,400 was subscribed by the congregation present. In the afternoon, after Dr. Hatfield’s sermon, $2,000 more was subscribed; and in the evening, some $200 additional was collected, making nearly $14,000.

Much of the credit for the prosecution of this work,—the erection of such a large and handsome church edifice, is due to the zeal and personal efforts of the esteemed pastor, the Rev. C. H. Fowler; and under his auspices there is no question but that the work will be completed during 1867.