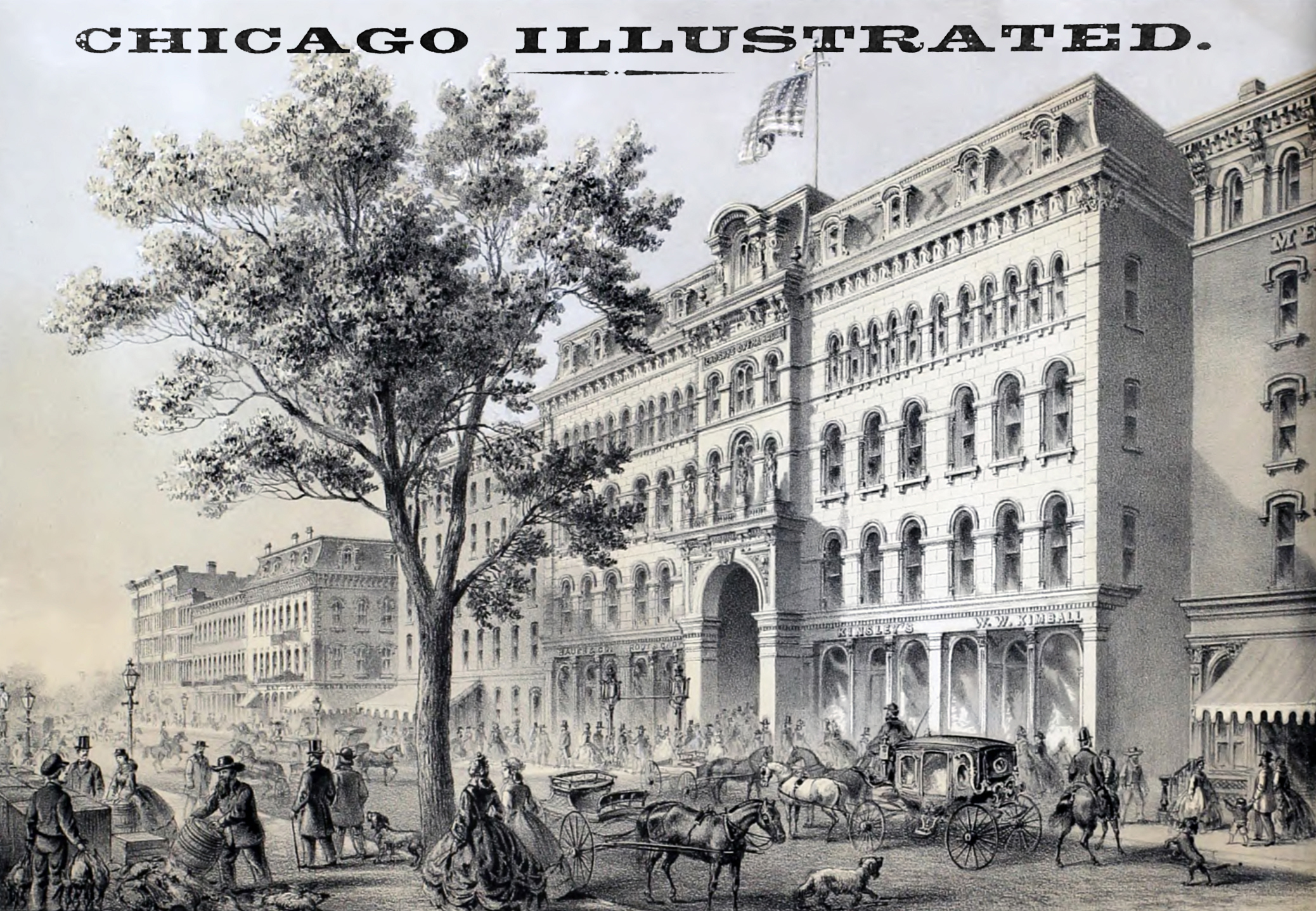 ON this plate is given a view of the front of Crosby’s Opera building, the finest public building in the West, and hardly excelled by any similar structure in the United States. The magnificent Opera House, which is without equal in the United States, forms but a part of this elegant and costly structure. The main building, the front of which is represented in the plate, is on Washington street, between State and Dearborn streets. The view is taken from State street, looking west. The building has a front on Washington street of one hundred and forty feet; is four stories high, with a Mansard roof, and the architecture is Italian. It is built of the now justly celebrated Athena marble, quarried within forty miles of Chicago, which is extensively used in the construction of so many public buildings and private residences in Chicago.

The need of an opera house in Chicago had become more and more apparent, as the population of the city got larger, and its wealth and taste had in like manner increased. Chicago had always been a liberal patron of music, and its local celebrities, as well as foreign artists, found a public always willing to greet them and to make that greeting substantial.

In 1863, Mr. Uranus H. Crosby, of Chicago, a gentleman of means and of great enterprise, conceived the idea of building in this city an edifice of this kind, which, while designed to be of personal profit to its projector, should also be a credit and an ornament to the city, and give stability to the growing interest of the fine arts. Filled with this most honorable ambition, he, in company with W. W. Boyington, Esq., an architect of Chicago, visited the other cities of the country, examining with care all the buildings erected for like purposes, profiting alike by the practical excellencies and the practical defects which they witnessed. The results of this careful and deliberate examination was the plan of the present building, which, without exception, is generally acknowledged the best designed structure of the kind in America. It embraces all the conveniences and excellencies of the various similar establishments, and as few of their deficiencies as possible. The front of the building combines simplicity with massiveness, and the ornamental designs are sufficiently elaborate, and yet do not, as is too often the case, spoil the general effect. In the centre is a projection which is twenty-three feet wide, through which is an arched entrance to the building. Upon the parapet above this entrance are placed four statues, representing respectively Painting, Sculpture, Music, and Commerce. These were designed and execute by L. W. Volk, Esq., a sculpture of Chicago. Higher in this same central projection are two large figures, designed also by Mr. Volk, representing Music and the Drama. These are placed one on each side of an elaborate dormer window.

On the ground floor are four large halls or stores, each thirty feet front by one hundred and eighty feet deep, and sixteen feet high. These are occupied respectively by Root and Cady, J. Bauer and Company, and W. W. Kimball, as music and piano stores, and by H. M. Kinsley’s celebrated and elegant confectinery, ice cream and dining establishment.

The second floor of the main building is occupied by offices-real estate, insurance, millinery, and others. The third floor is similarly occupied. The fourth floor is devoted to the studios of artists, the following persons being now there: George P. A. Healy, J. H. Drury, C. Highwood, J. R. Sloan, Mrs. S. H. St. John, P. F. Reed, J. H. Reed, H. C. Ford, John Antrobus, E. Seibert, and D. F. Bigelow. On this same flooris a very fine Art Gallery, thirty feet wide by sixty feet long, and eighteen feet high. It is admirably arranged for the purposes to which it is devoted. It is filled with the works of the artists of this and other cities, and is one of the most attractive exhibitions of Chicago.

In the rear of the building is the Opera House, from which the whole edifice takes its name. Passing through the main entrance, already described, to the next floor, a spacious corridor is reached, which is richly ornamented with frescoes, mirrors, and statues. From this corridor open to the right two most spacious and richly furnished toilet rooms, for ladies and gentlemen. On the left of the corridor are three large doorways, through which the visitor enters the auditorium of the Opera House. The effect which is produced by the appearance of the hall, upon opera night, when filled by an audience is very fine. There are seats for three thousand persons. It is in all its parts and appointments, the finest theatre in the country, and has been so pronounced by all the artists who have seen it. It must, in fact, be seen to be greatly justly appreciated. No description, no matter how elaborate, will convey that sufficient idea of it that is once obtained by a personal view. It has that rare advantage, that a person in any part of the hall, whether in the topmost seat of the gallery, or on either side, or in the most remote part of the lobby, can see and hear every thing that passes on the stage. The view is wholly unobstructed.

The dimensions of the auditorium are eighty-six by ninety-five feet, and sixty-five feet high. The ceiling is a triumph of art. It is crowned by a central dome, some twenty-eight feet in diameter. This dome is encircled by panels bearing portraits of Beethoven, Mozart, Auber, Weber, Verdi, Wagner, Gounod, Gluck, Bellini, Donnizetti, Meyerbeer, and Rossini, and the other parts of the ceiling are richly frescoed and moulded in gilt. Directly in front of the stage, and over the orchestra, is a painting forty feet long. from the “Aurora” of Guido Reni, the panels on either side of which are filled with allegorical representations of Tragedy and Comedy.

The stage is extensive and convenient, and supplied with every facility. There are six proscenium boxes. The main floor is apportioned to the orchestra, the parquette, and the dress circle, the parquette rising from the orchestra to nearly the height of the circle. The second floor is the balcony circle, the centre of which is divided into fifty-six private boxes; these immediately front the stage. On the next floor is the family circle, which, though elevated, is none the less convenient. It is comfortable and admirably adapted to hearing and seeing what passes on the stage. The gallery fronts are protected, and at the same time handsomely ornamented with open wire-work, painted in white and gold, and cushioned with blue silk.

The arrangements for heating and lighting this building are complete, and have proved most successful. The entire number of burners are lighted by one operation of an electric apparatus. The means of exit from the Opera House are various, and so arranged that in case of an alarm, or of actual danger, the audience may get out of the building without confusion, easily, expeditiously, and safely. In addition, there has been added to the building another wing, fronting on State street, and containing a fine music or concert hall, fifty by ninety feet, with galleries on three sides.

The cost of the entire building and site was nearly, if not quite, seven hundred thousand dollars. This magnificent edifice was built 1864-5, and was ready for occupancy in March, 1865. The inauguration of the Opera House was intended to have taken place on the night of Monday, April 17th, 1865; but the death of President Lincoln, which took place on the Saturday previous, caused it to be postponed until Thursday, the 20th of April, when it was opened by Gran’s Italian Opera troupe, the opera being “Il Trovatore.” Previous to the opera, and as soon as the orchestra had taken their seats, there was a universal call by the densely packed audience for Mr. Crosby. That gentleman appeared, and as soon as the applause which had greeted him had subsided, made a brief and excellent address in acknowledgement of the compliment. He declined making a speech, preferring, as he said, to let the building speak for itself. His personal object, as a business man of Chicago, had been to use every effort in his power to promote the interests, elevate the tastes, and conduce to the happiness of the great city in which he had cast his lot. He introduced to the audience the Honorable George C. Bates, who read a poem written for the occasion by W. H. C. Hostner, Esq., the “Bard of Avon.” The audience assembled on that evening was undoubtedly the most numerous and brilliant ever assembled on a like occasion in this city.

The following are the persons whose names are connected with the erection and construction of this building: