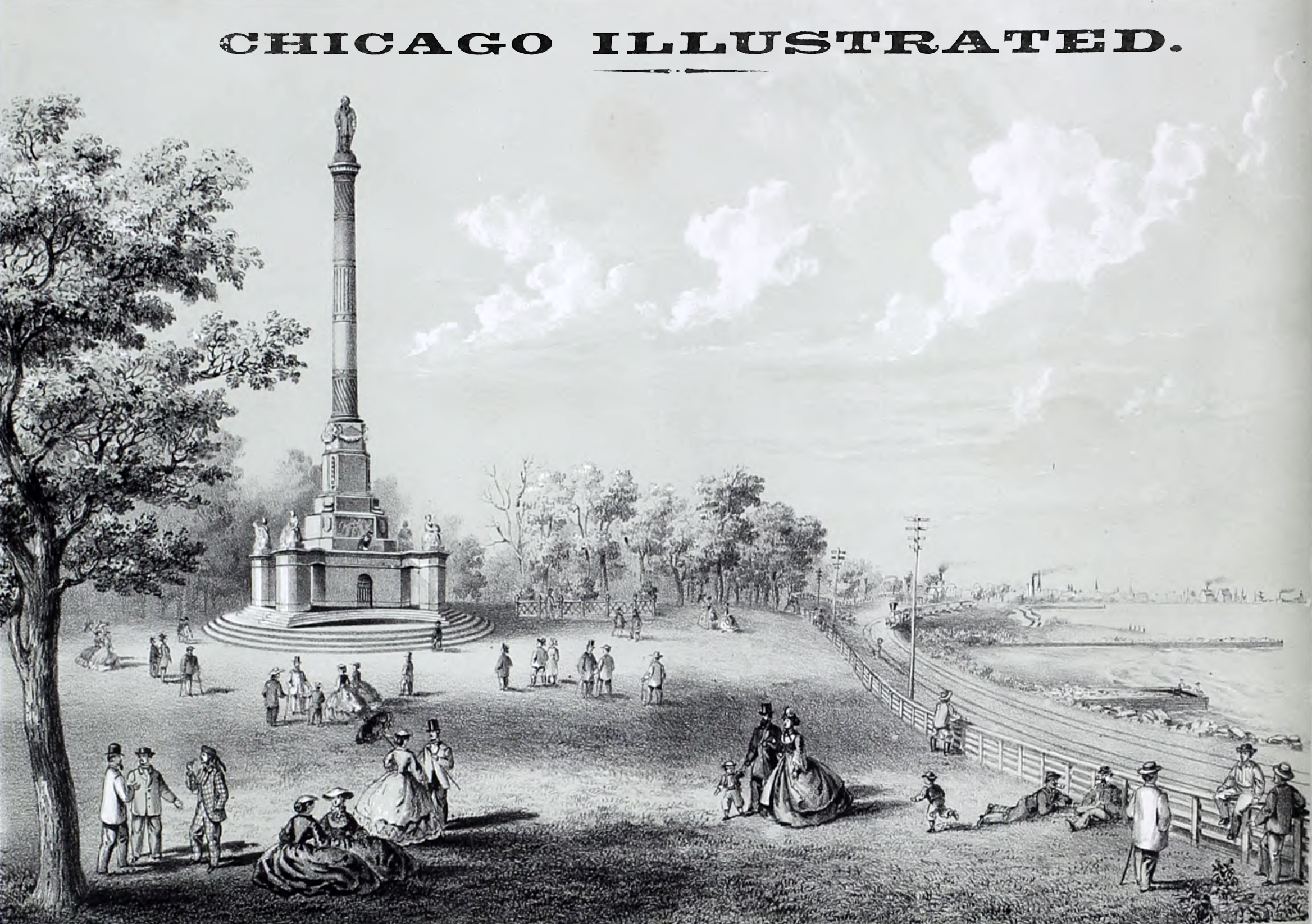 DOUGLAS MONUMENT—The artist has anticipated time to the extent of representing the Monument as it will be when completed. Otherwise, the scene is presented as it is. In 1848, or about that time, Mr. Douglas purchased several pieces of land outside of the then limits of Chicago. Among other pieces was that known since then as Cottage Grove, containing about 40 acres, and lying on the lake shore, and about three miles south of the Court House. With the exception of this south-east corner, this tract is covered with a thick growth of oaks, in the centre of which he lived in 1855 and 1856, while in Chicago. He prepared a plan of the land, subdividing it into building lots and parks, and selected that portion of cleared land, about three acres, for his future residence. In 1857, shortly after his second marriage, he decided this lot to his wife. When he died, in 1861, there was a great desire that he be buried in the State. Consent was obtained, and he was buried upon the spot enclosed, and which lies just northeast of the Monument. Subsequently, the State of Illinois purchased this lot from the widow of Mr. Douglas, paying therefor $25,000.

The Monument Society is an incorporated body, but the State has no connection with it further than to give its consent for the erection of the Monument.

On the 6th of September, 1866, the cornerstone of the Monument was laid with Masonic ceremonials, the Grand Master, P. H. Bromwell, officiating. An oration was delivered on the occasion by Major General John A. Dix. Andrew Johnson, President of the United States, and Hon. W. H. Seward, Secretary of State, also made addresses. The Hon. Gideon Welles, Secretary of the Navy, Ulysses S. Grant, General of the Armies of the United States, and Admiral David G. Farragut, of the navy, with a vast concourse of people, including many distinguished citizens, were also present on the occasion. Mr. Douglas’s sons, Martin and Stephen, and his brother in law and sister, the Hon. J. N. Granger and wife, were among the guests of the Monument Society.

The Monument itself is thus described by the Architect, L. W. Volk, Esq., of Chicago:

The Monument will consist of a circular platform base 52 feet in diameter and 2½ feet high. Upon this will be placed a similar platform, but a little smaller, which will be surmounted by a sepulchre 20 feet square and 11 feet high, with walls 5 feet in thickness. It will contain a chamber 10 feet square. In the chamber will be placed the sarcophagus, containing the remains of the great statesman. The sarcophagus will be visible through a bronze door 6 ½ feet high and 3 feet wide. The sepulchre will be ornamented with projecting pedestals from the corners. Surrounding the sepulchre will be a pedestal 21 ft. in.height, having a base 15 feet squllre. On this will be erected a column 43 feet in length, 6 feet square at the base, and 31 feet square at the top. The column will be terminated by a cap 6 feet high, which form the basis for the colossal statue of Douglas.

Surrounding the sepulchre will be placed four seated symbolical figures, life-size, sculptured in light marble. One of these figures will represent Illinois holding in her hand a medallion likeness of Douglas. By her side will be a sheaf of wheat and the State arms. The remaining figurcs will represent America with a shield, History reclining on a tablet, and Fame with the symbolical wreath and trumpet. Over the entrance to the sepulchre will stand an eagle, and on the base of the pedestal above are four bas reliefs representing the history and progress of the West. These represent Indians and hunting scenes, pioneers building log cabins, plowing and felling trees; commerce is represented by a ship and packages of goods; and the sciences are represented by a locomotive, a railroall and a telegraph. Still another device represents education, a group of children, the State Capitol building, a church in the distance, etc. The statue will represent the great patriot and statesman as standing by the Constitution on one side, and by the Union on the other which is represented by the Roman fasces.