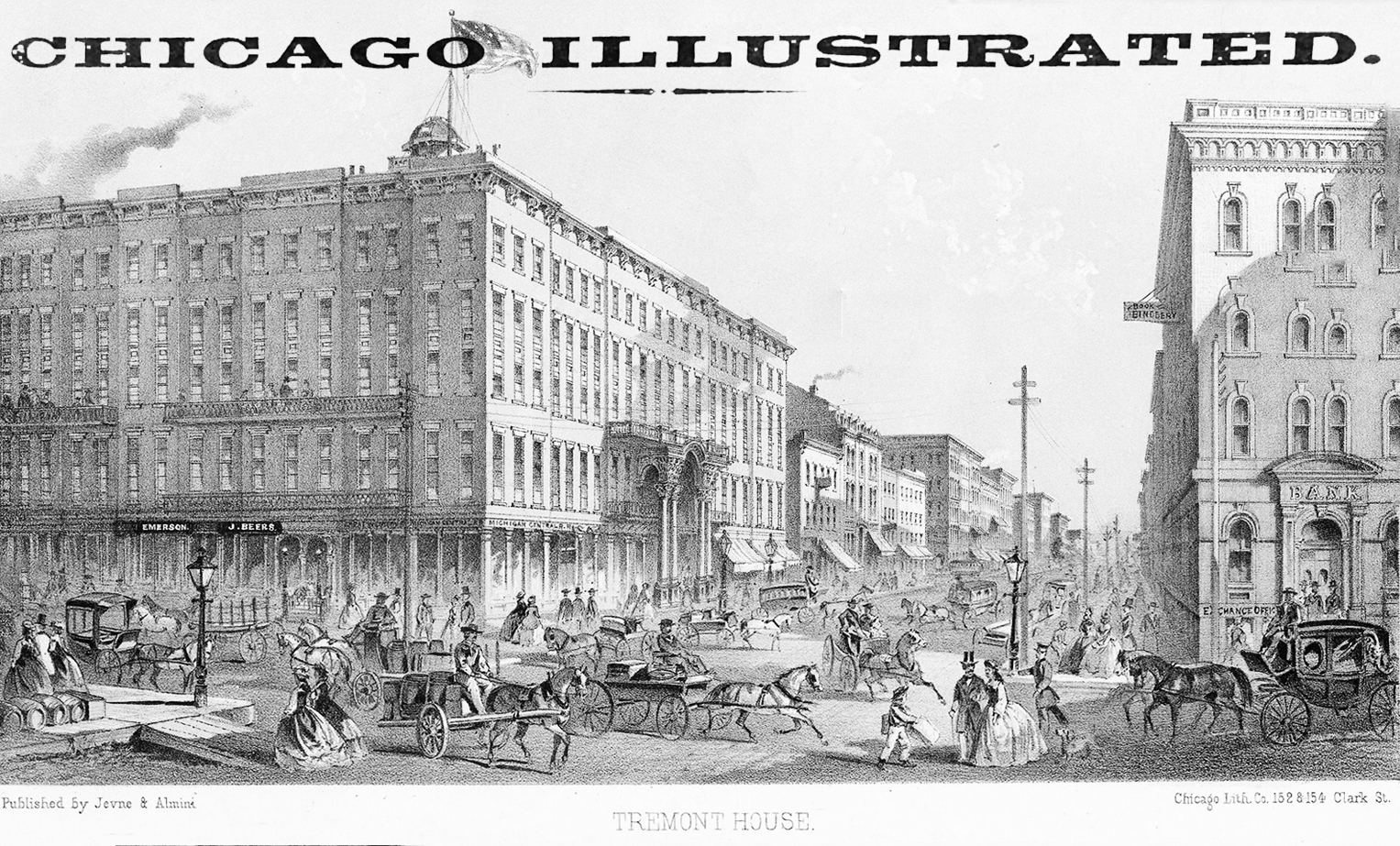 THE TREMONT HOUSE—The well-known hotel of that name is located at the south-east corner of Lake and Dearborn streets, fronting one hundred and eighty feet on Dearborn street. The view gives both of these fronts, and also of the buildings on the east side of Dearborn street, as far south as Madison street, including McCormick’s and Rice’s Buildings, the Masonic Temple, and Portland and Speed’s Blocks.

The Tremont House is one of the ancient landmarks of the city. The first house making any pretensions to the character of a hotel was a wooden structure, called the “Tremont House,” on the north-west corner of Lake and Dearborn streets, owned and kept by the brothers Couch. Subsequently they erected a more extensive building of brick, diagonally opposite their hotel, and when it was finished, they transferred the business and title to the new edifice. This was the beginning of the present large building. From time to time they made additions to it, they remaining proprietors. In 1853 the Tremont House was leased by Gage Brothers, and in 1855 John B. Drake, Esq., became associated with them in its management. It stood then, and until the new Sherman House was completed, without a rival in the Western States. In 1861 the building was raised to the new grade of the streets, and at the same time was remodeled, and that so extensively that it may be said to have been rebuilt. It was enlarged, and newly furnished throuhout. In 1863, David A. Gage, Esq., retired from the management, and the hotel is now conducted by George W. Gage and John B. Drake, Esqs., under the firm name of “Gage and Drake.” The building is of brick, five stories high, containing two hundred and sixty rooms. Several of these rooms embrace parlor, chamber, bathing and other closets; and the hotel, in its furnishing and in its management, is inferior to none in the United States. The ordinary average arrivals are one hundred a day—this not including those who come hither on special occasions. Until the completion of the new Chamber of Commerce, the spacious halls of the hotel were for many years used as a sort of evening exchange by the grain brokers of Chicago.

The Tremont House has many historical associations. It was from its balcony that Messrs. Lincoln and Douglas commenced the memorable canvass for Senator in 1858, and it was there that Senator Douglas died in 1861. One of the best evidences that its proprietors have reaped the reward of public confidence and patronage is the fact, that it is the only hotel in Chicago that has neither suspended nor changed hands since 1853.