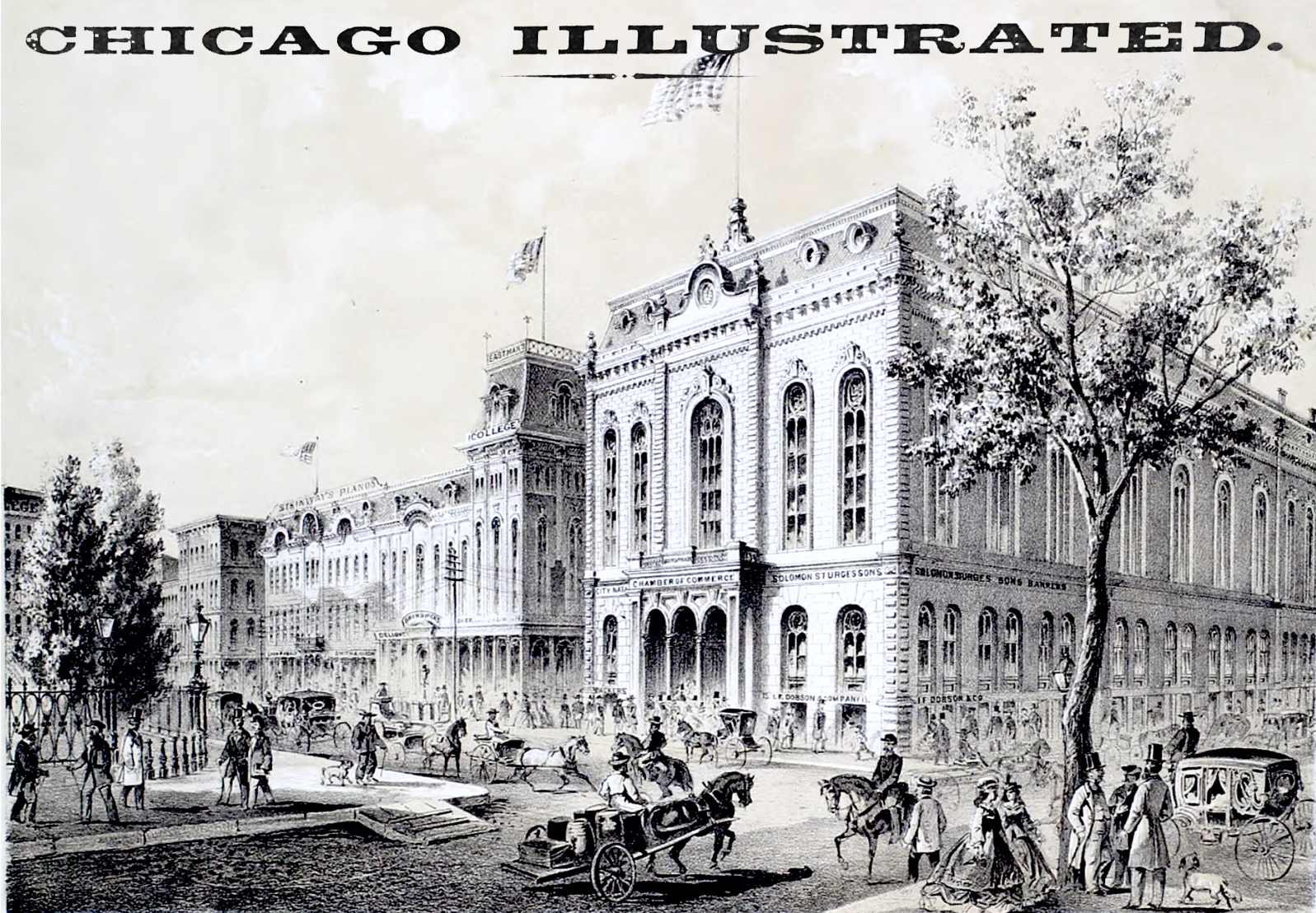 THE CHAMBER OF COMMERCE building, shown on the right of this picture, is one of the latest of the many new and handsome public edifices erected of late years in Chicago. It is located at the south-east corner of La Salle and Washington streets, and fronts the Court-House square. To the east is the new building of Smith and Nixon; and still further to the east, at the corner of Clark street is the Methodist block.

The style of architecture is decidedly composite, the beauty and majesty of Art having been made subordinate to the amount of capital stock and the prospect of future dividends.

The dimensions of the main building are ninety-three by one hundred and eighty-one feet, and one hundred feet in height.

From the main door the entrance leads up a short flight of stairs to a hall which extends the whole length of the building, each side being apportioned into handsome business rooms, all of which are occupied by merchants, banks, and insurance companies. The sides of the building face respectively on La Salle street and Exchange place. From this floor the ascent to the grand hall is by a double flight of stairs. This hall is the finest, in all its details, erected in the West. Eighteen windows throw their colored rays upon the room. Its loftiness, the harmony of the coloring, and the general character of the design are very imposing. It is elaborately adorned with freshness, paintings and appropriate designs. The hall is one hundred and forty-three feet by eighty-nine, and forty-four feet from floor to ceiling. The interior of this grand hall is appropriately furnished for the business to which it is dedicated. The hall is lighted by Frank’s reflectors on the top of the roof, which is one of Mensard’s.

The building was erected and the site purchased by an incorporated company, known as the “Chamber of Commerce,” composed of members of the Board of Trade. It cost about four hundred thousand dollars. The external view of the building, though faithful in every particular, fails in giving any just idea of the magnitude, convenience, elegance and grandeur of the interior construction and finish. The architect was E. Burling, Esq., of Chicago.

On Wednesday, August 30th, 1865, this grand edifice was dedicated, with imposing ceremonies, to Commerce. Prayer was offered by Rev. O. H. Tiffany, D. D., and the inaugural address was delivered by the Hon. Charles Randolph, President of the Board of Trade of Chicago. Other addresses were made by S. J. Andrews, Esq., of Maine; J. S. Ropes, Esq., of Boston; the Hon. D. G. Ford, Mayor of Oswego, New York; J. p. Bankson, Esq., of Pennsylvania; W. G. Perkins, Esq., of Ohio; the Hon. G. V. N. Lothrop, of Detroit; Adam Brown, Esq., of Hamilton, Canada West; Hon. Judge Harbison, of Louisville, Kentucky; Barton Able, Esq., of St. Louis; Hon. E. B. Martindale, of Indiana; A. S. Pease, Esq., of Troy, New York; and Henry G. Smith, of Tennessee. Delegates from the Boards of Trade and commercial organizations of Baltimore, Cleveland, Toledo, Albany and Troy, Portland, Boston, Cincinnati, Philadelphia, Pittsburgh, St. Louis, Louisville, New York, Memphis, Buffalo, Oswego, Detroit, Milwaukee, Montreal, Toronto, Hamilron, Ottawa, and from all the cities and towns of the North-West. The dedication of the building was followed by a series of festivities, covering three or four days.

The Board of Trade of Chicago. to whose enterprise the city owes the successful completion of this handsome structure, is composed of about fifteen hundred members. It was organized in 1848, and then numbered less than one hundred members. Ten years later, in 1858, it had increased to four hundred members, when a building was erected on Water street, arranged expressly for its meetings on ‘Change. The rapid increase of business, the Board itself increasing to twelve hundred members made it necessary, in 1863, to take steps for another anore suitable building. The present building is the magnificent result of the prompt and earnest efforts of the gentlemen to whom the work was intrusted.