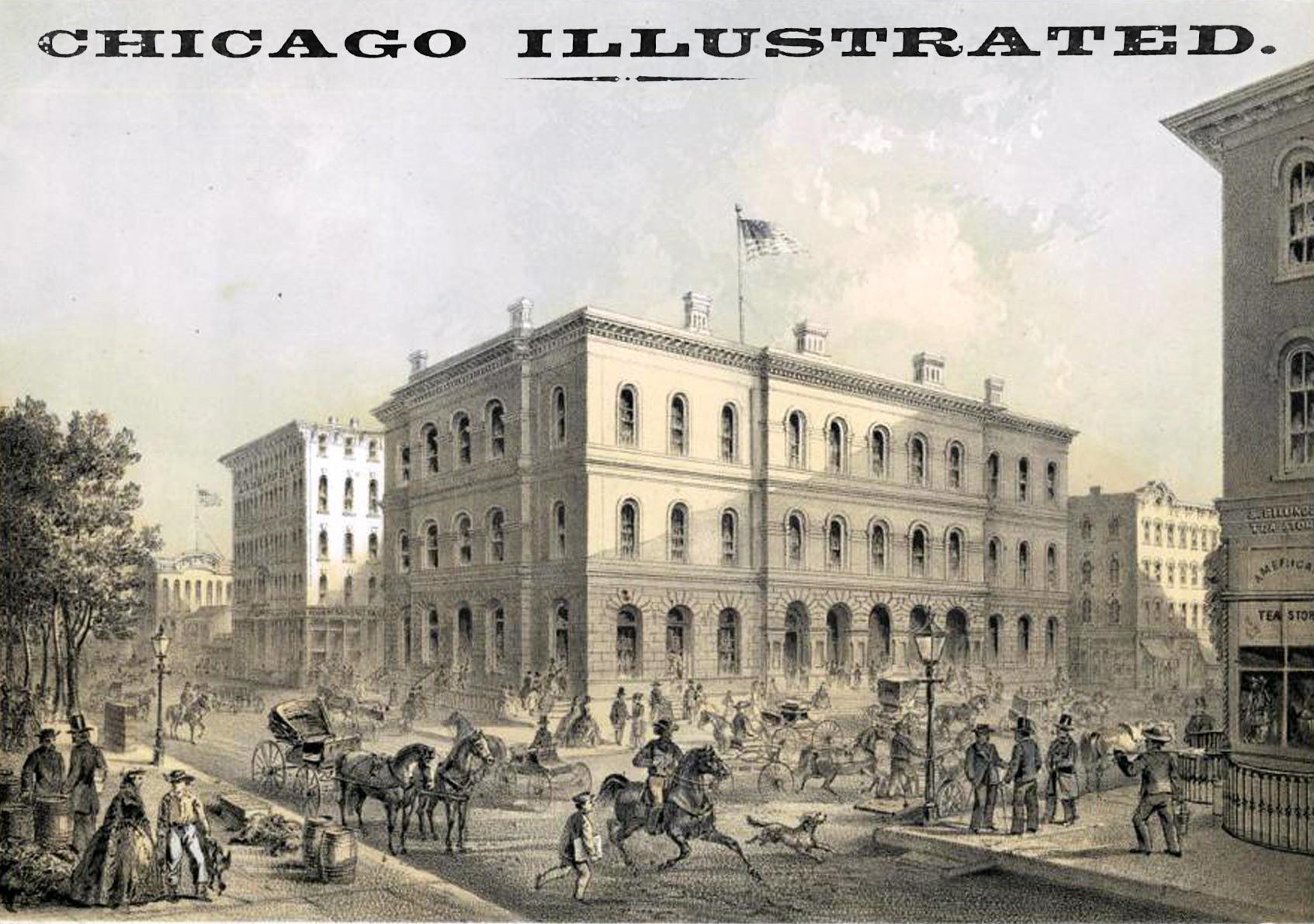 POST OFFICE—This is one of the best buildings erected in the West by the Government, for the accommodation of its officers. It is built of Illinois marble, and presents a finished and handsome appearance. It is erected at the north-west corner of Dearborn and Monroe streets, the main front being on Dearborn street. The building is three stories high, and has a very fine basement. The main floor and basement are occupied exclusively by the Post Office; the second story by the Collector of Customs, the Public Depositary, the Collector of Internal Revenue, Steamboat Inspector, United States Marshal, United States Commissioner, and by clerks of the Post Office. The Hon. Luther Haven is Collector and Depositary, and T. J. Kinsella Deputy Collector. The third story is occupied by the Federal Courts, Clerks, and District Attorney, with rooms for grand and profit jurors.

The site on which the building is erected was formally occupied by Doctor C. V. Dyer, as a residence. It was purchased by the Government in 1855, at which time an appropriation was made by Congress for the erection of the Post Office. The original plan was a building eighty-five feet on Dearborn street, and sixty feet on Monroe street, and the contract was awarded upon that plan on the 25th of October, 1855, the cost being eighty-four thousand dollars. Upon the earnest appeals of the citizens, Congress enlarged the appropriation, and the exterior dimensions of the building were extended to one hundred and fifteen feet on Dearborn street, and sixty-five feet on Monroe street. This was not satisfactory, however; and in 1856-7, Congress still further increased the appropriation, and the dimensions were increased to their present figures—one hundred and sixty feet on Dearborn street, and seventy-eight feet on Monroe street. These changes caused great delay in building, and nothing beyond the excavation of the basement was done until July, 1857, when the building was actively commenced. The original contractors —Jones and Bruff, of Rochester, New York —died during the succeeding winter, and were succeeded in the contract by L. A. Ward, of the same place. The building was completed and ready for occupancy in the autumn of 1860, and cost, completed, two hundred and forty-three thousand dollars. The plans of the building were prepared by Ammi B, Young, of the Treasury Department, and Colonel John , H. Eaton, of Chicago, was in February, 1857, appointed Superintendent of Construction.

The following were the persons engaged upon this building, besides the two we have named: 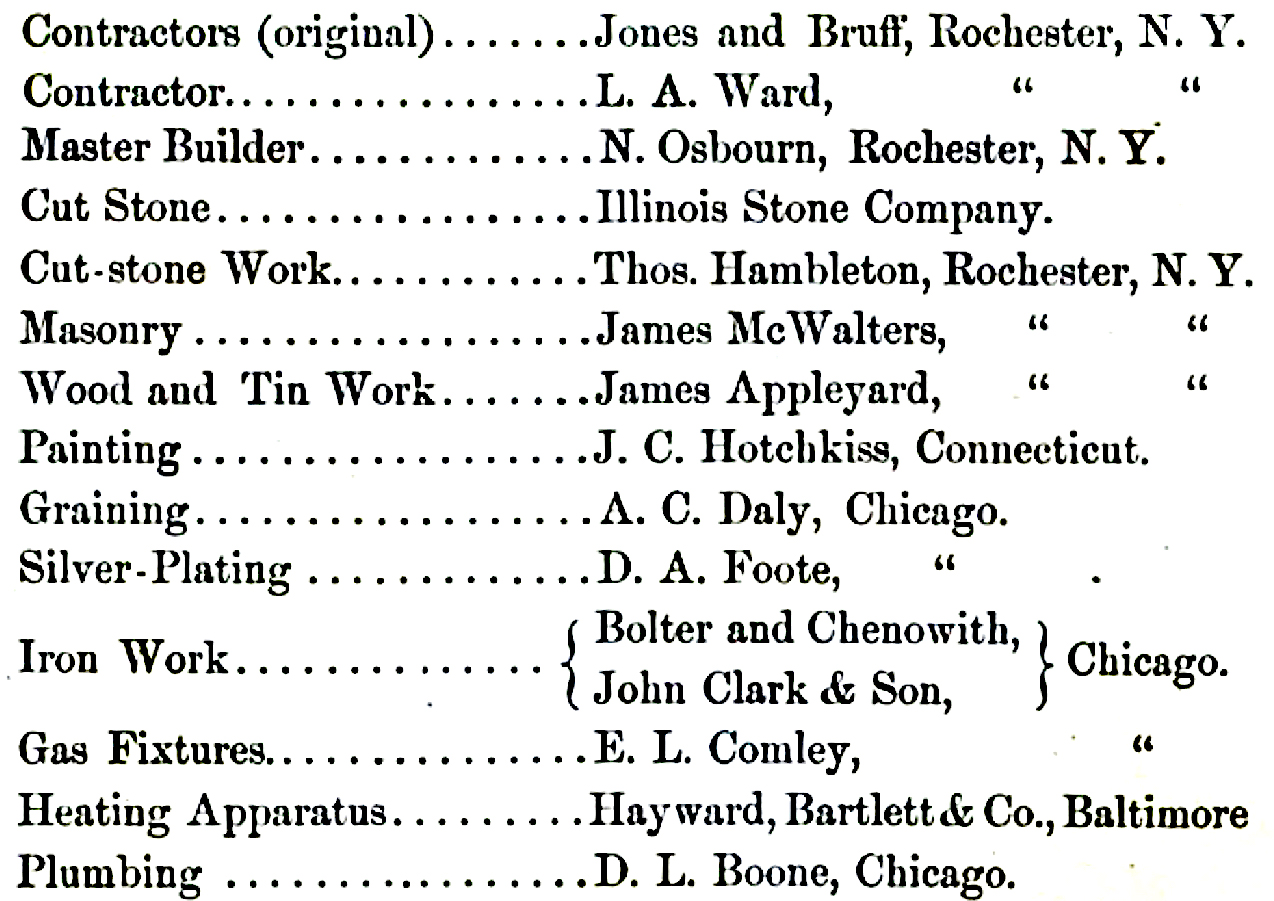 The Post Office business of any city generally gives a fair basis for an estimate of its comparative prosperity. The general postal business of the Chicago Post Office is only exceeded by that of New York city, and in merely local business it ranks third—New York and Philadelphia only equalling it. The number of clerks employed is one hundred and six. The executive officers of the Post Office are —Samuel Hoard, Postmaster; A. S. Reynolds, Assistant; T. L. Holbrook, Chief Clerk; S. F. Hoard, Cashier; George B. Armstrong, Special Agent.