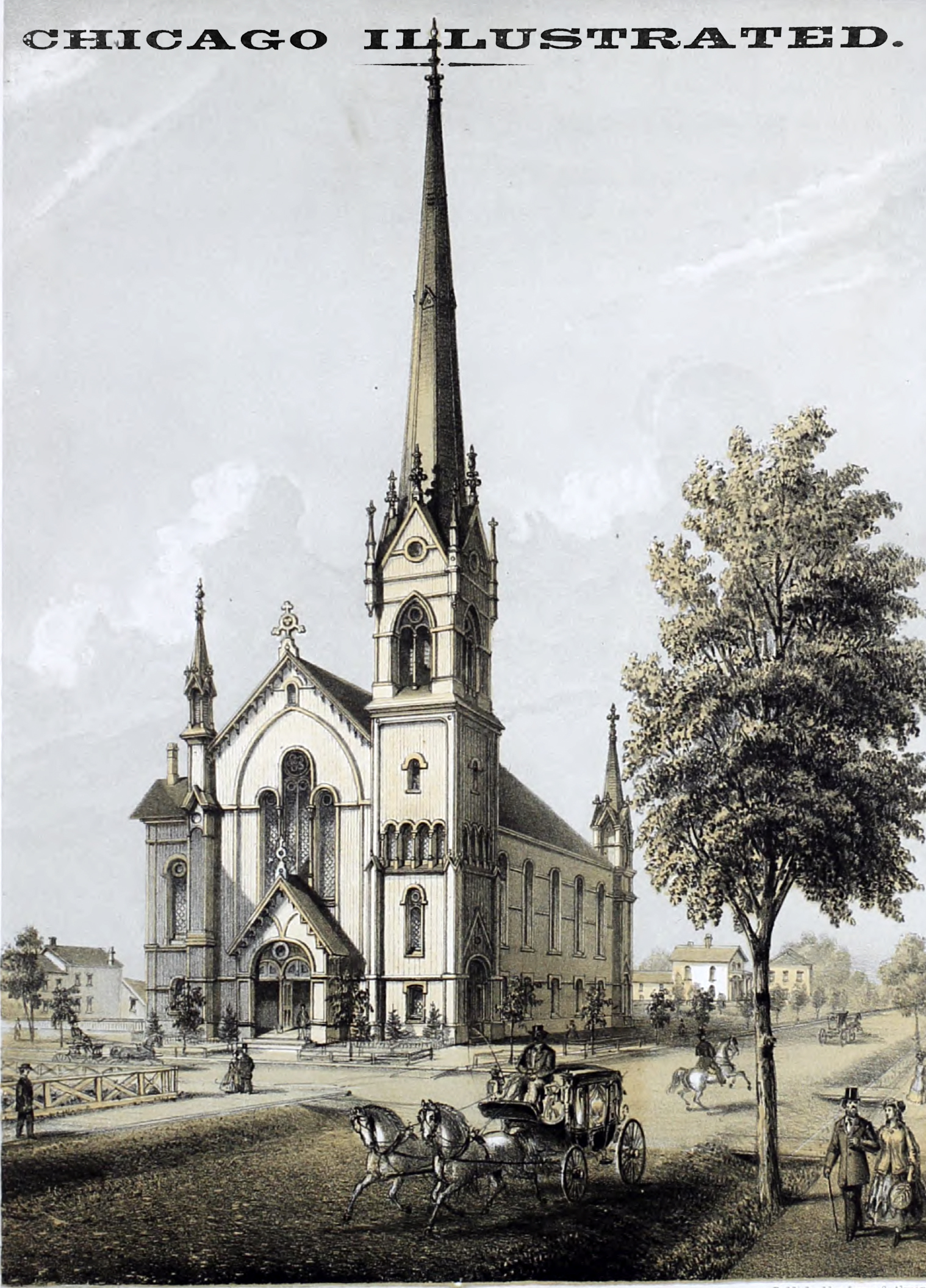 EIGHTH PRESBYTERIAN CHURCH.—This Edifice is located at the north-west corner of West Washington and Robey Streets, and thus occupies a central point in the pleasant and rapidly growing section of the city that lies west of Union Park. It is built of wood, in a solid and well finished manner, and is regarded as a model of architectural beauty. It has a front of fifty-four feet, and is one hundred and seven feet in depth. The main tower is on the corner, and is surmounted by a graceful spire, which rises to the height of one hundred and seventy feet. Two entrances, one opening from Washington street, and the other from Robey, lead to the vestibule, from which two spacious stairways ascend to the main audience room. This room is also reached by an entrance in the rear, which opens from Robey street. The room measures sixty-two feet by eighty, and affords comfortable seating for seven hundred and fifty persons. The ceiling is divided by beautifully carved woodwork into panels, which, together with the walls, are chastely frescoed. The windows are of neatly stained glass, with richly ornamented beads and borders. At night the room is softly lighted from above by reflectors inserted in the ceiling. The pulpit is of solid black walnut, and stands on a spacious platform, in the rear of which is the choir recess, measuring twenty-one feet by twelve. The pews are grained in imitation of oak, with walnut arms and rails, and upholstered in a handsome and luxurious manner. In all respects, indeed, beauty and utility have been so combined in the finishing and furnishing of this room as to make it one of the most inviting auditoriums in the city. In easy communication with the pulpit is a very convenient and comfortable study for the pastor.

The first story of the building, which is eleven feet high in the clear, is divided up into several apartments, (including an attractive church parlor,) which are admirably arranged and appropriately furnished for the convenience of the Sabbath School, and for the various religions and social purposes of the Society.

The architect was G. P. Randall, Esq., and the builders, Messrs. Harris and Child of Chicago. The total cost of the building was about thirty thousand dollars. The fresco painting was done by Jevne and Almini.

The church was organized on the 10th of December, 1864, and comprised twenty-five members, of whom Messrs. S. R. Bingham, and B. L. Chamberlain were chosen Elders. At the same time a unanimous call was made out for the Rev. Jas. T. Matthews to assume the pastoral care of the new society. Its first place of worship was a chapel of thirty feet by forty-five; but this house was soon found to be inadequate to the requirements of the rapidly increasing population. Accordingly in the month of July, 1866, the foundation of the present structure was laid, and the building was completed and opened for Divine Worship on the third Sabbath of June, 1867.

Since the organization of the church its eldership been increased by the addition of Messrs. O. F. Woodford and Thos. Hood. Its present Board of Trustees is composed of Messr. E. H. Whitney, I. McAllister, G. H. Miller, Thos. Hood, and I. E. Fay. S. R. Bingham, Esq,. is the Superintendent of the Sabbath School, which has already reached a high degree of prosperity under his skillful management. In all respects, indeed, this vigorous young church is flourishing, and looks forward expectantly to a useful and happy future.