AFTER a very vexatious delay, the Supreme Court has finally seen fit to promulgate its important decision un regard to the validity of the act of the Legislature passed last winter, and subsequently ratified by the people at the polls, authorizing the construction of a park for South Chicago, according to the provisions contained in the bill.

This decision, so long withheld from the public, is favorable to the Park, the bill being sustained by the court. The commissioners are authorized to issue 7 per cent. bonds to an amount not exceeding $2,000,000, and sell said bonds. They shall also file with the county clerk, annually, an estimate not exceeding $300,000, necessary for the payment of interest on the bonds, and for the improvement of said park during the next year; which estimate shall be assessed and included in the general tax warrants, and collected as other taxes upon the the property of said towns. The commissioners are to have control over all roads passing through said parks, and to have general power for the government and regulation of the parks. 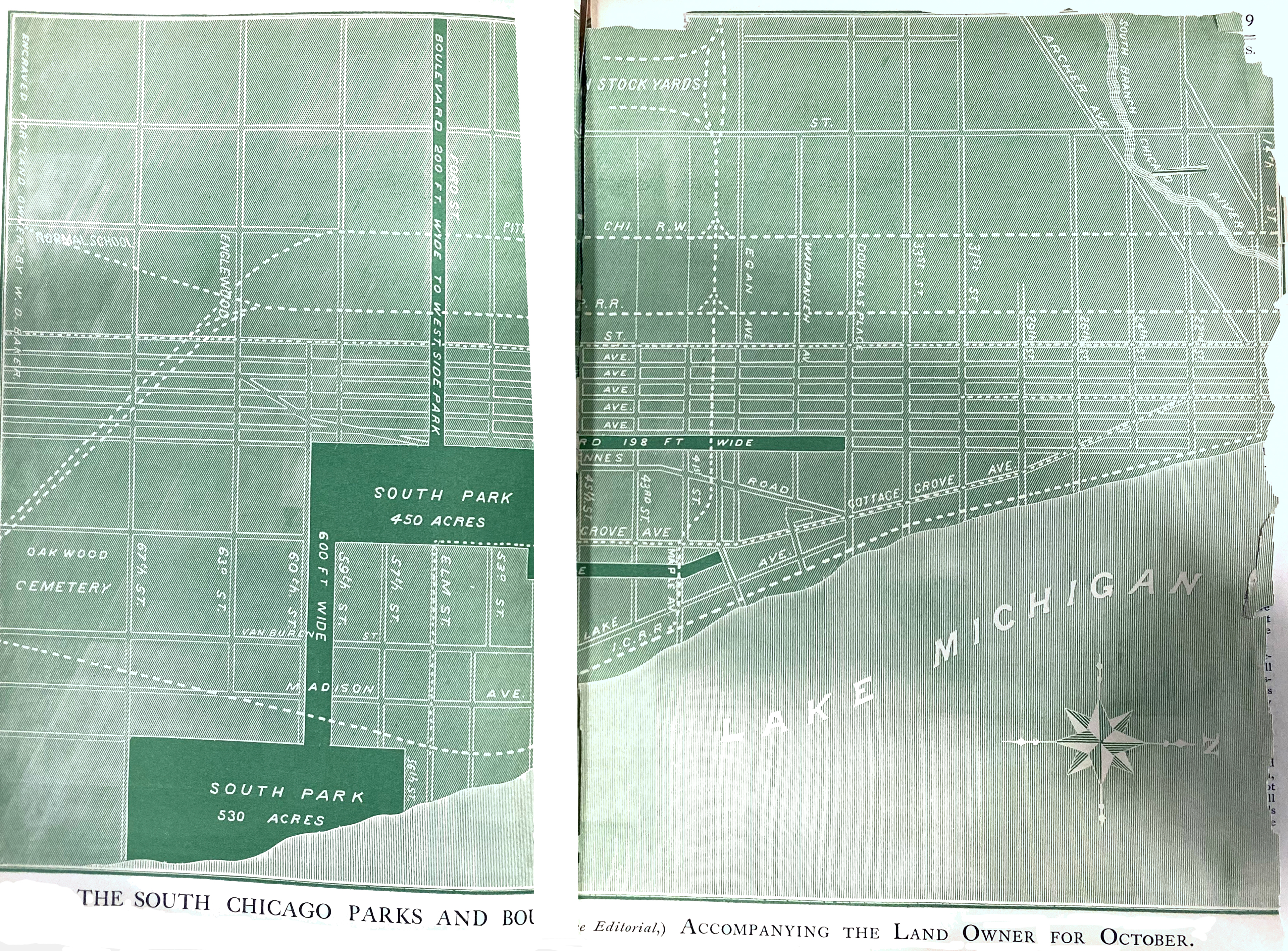 The accompanying cartoon shows the exact location of the parks and boulevards, and will be found of much value for reference in the future. There is a beautiful lake-shore drive, for some distance, in the lower park, and the boulevard connecting it with the city are all the most sanguine lovers of horseflesh could desire. Kankakee avenue, henceforth to be called South Park avenue, is soon to be curbed and paved its entire length, and will probably be the most popular route to these great pleasure grounds.

This decision establishes the fact beyond a peradventure, that Chicago will have, at no distant day, the finest system pf parks in the world. Its bearing on real estate is already sensibly felt. Capital is movin forward for investment in a locality where fortunes are to be made—around the parks and adjacent to the grand boulevards.

Had this decision been promulgated two months ago, as it should have been, the stagnation of midsummer would not have come. The commissioners will now go actively at work, and the bonds will soon be issued. Five years hence the prairie below Hyde Park will be transformed into a beautiful garden, filled with trees, grottos, rustic arbors, and perfume from a thousand springing shrubs and plants. We have waited patiently, and our patience will be rewarded.

South Park Map.
A map of the South Parks and Boulevards has been carefully prepared, and is now on exhibition in the County Clerk’s office, east wing of the Court House, for the convenience of the public. The map shows the several tracts purchasedand condemned for park purposes, the size of each parcel, the names of the persons from whom they were purchased, and the price paid for each, together with the tracts included in the limits of the parks which hve not yet been purchased, or as to which proceedings for condemnation are pending. 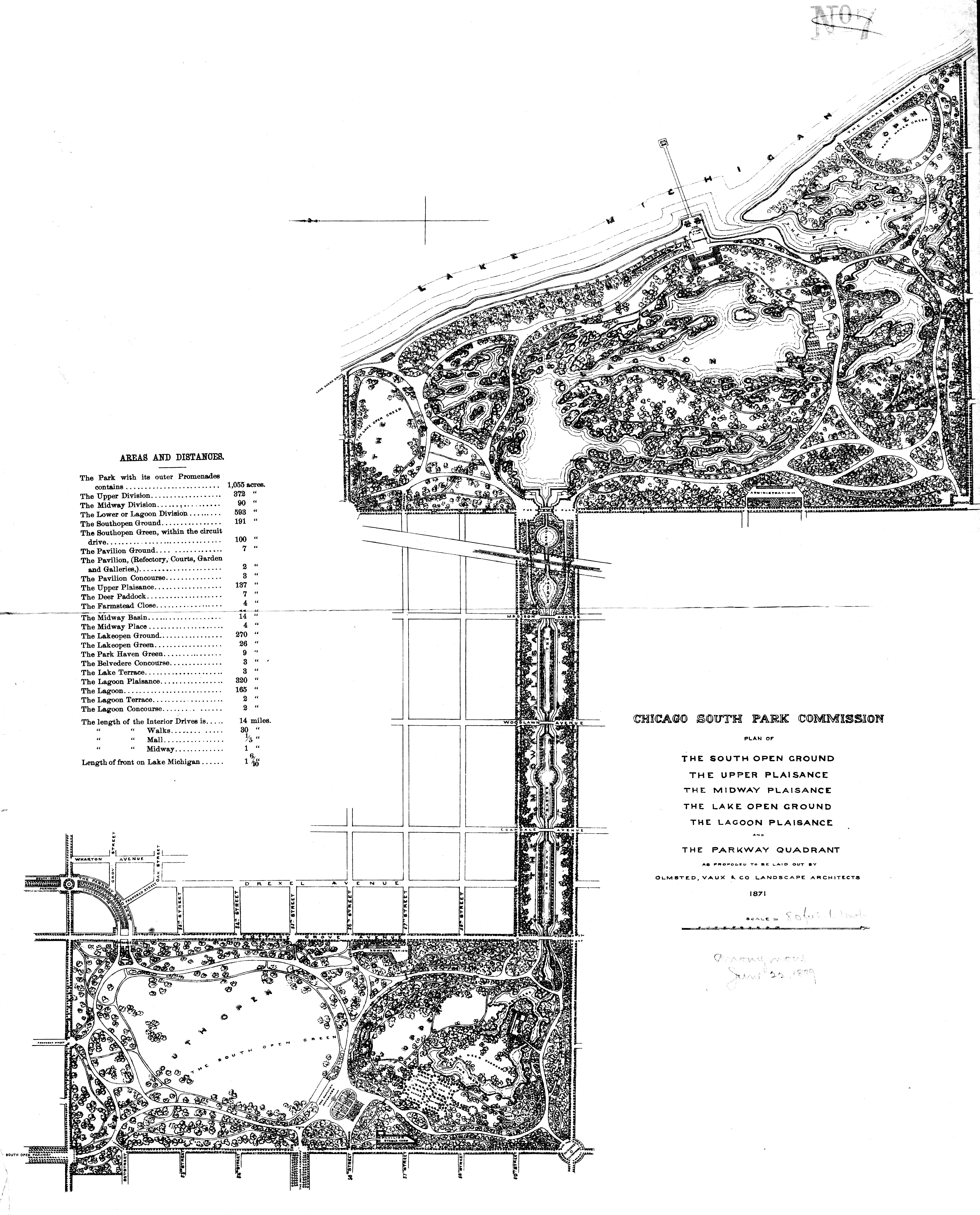 Under the head of unfinished business, the naming of the East and West parks was brought up.

On the motion of Commissioner Sherman it was voted hereafter call the East park Jackson Park, and the West park Washington Park.

THE NAMES OF THE SOUTH PARKS.
The universal protest against the designation of the eastern portion of the South Park system as “Jackson Park” warrants some inquiry as to how this offensive partisan name came to be given to it. The South Park Commission consists now of Messrs. John R. Walsh, Bernard Callaghan, Martin Russell, John B. Sherman, and Paul Cornell. Mr. Cornell is the only man on the board who is regarded as a Republican. Mr. Sherman, perhaps, is not a very good Democrat, but it is understood that he rarely attends the meetings of the board. Messrs. Walsh, Callaghan, and Russell are all Democrats of the most pronounced character, and control the board. In fact, the board may be said to be unanimously Democratic, since Mr. Russell, the Auditor, is understood to “run things” as he pleases, while Messrs. Walsh and Callaghan, associate Democratic Commissioners, are called in—their offices being convenient—to give the sanction of the majority to Mr. Russell’s work. Hence it is easy to understand how the name “Jackson” came to be given to one of the South Parks, and why the people are in doubt whether it was called after Gen. Andrew Jackson, the sponsor of the spoils system in American politics, or Gen. “Stonewall” Jackson, the idol of the Confederates.

The Democratic Board of Commissioners must recognize the unfitness of this designation, especially as associated with the name of Washington, which has been given to the other of the South Parks, and they can well forego this partisan name in deference to public sentiment. American history does not place Gen. Jackson unpon the same plane with Washington, “the Father of his Country”; but there is one man, contemporaneous with Washington, with whose name Washington himself would be delighted to have his own connected in any manner. We refer to Benjamin Franklin. He was a scientist, a diplomat, a political economist, a statesman, and a patriot whose name will always give lustre to anything which it adorns. If one of the South Parks is to be called “Washington Park,” it would be eminently fitting to call the other “Franklin Park.” There would ben be no doubt in the minds of the people, after whom the East Park had been named, and no regret that a o partisan board had afflicted the people of Chicago, with a partisan name for one of their principal pleasure grounds. Messrs. Walsh, Callaghan, and Russell ought to reconsider this matter, and, if they neglect to do it, Messrs. Sherman and Council ought for once ton assert themselves. The system of parks should continue to be known as the South Parks, under which general name they are already familiar to the whole country.

THE PLAN OF THE COLUMBIAN EXPOSITION. 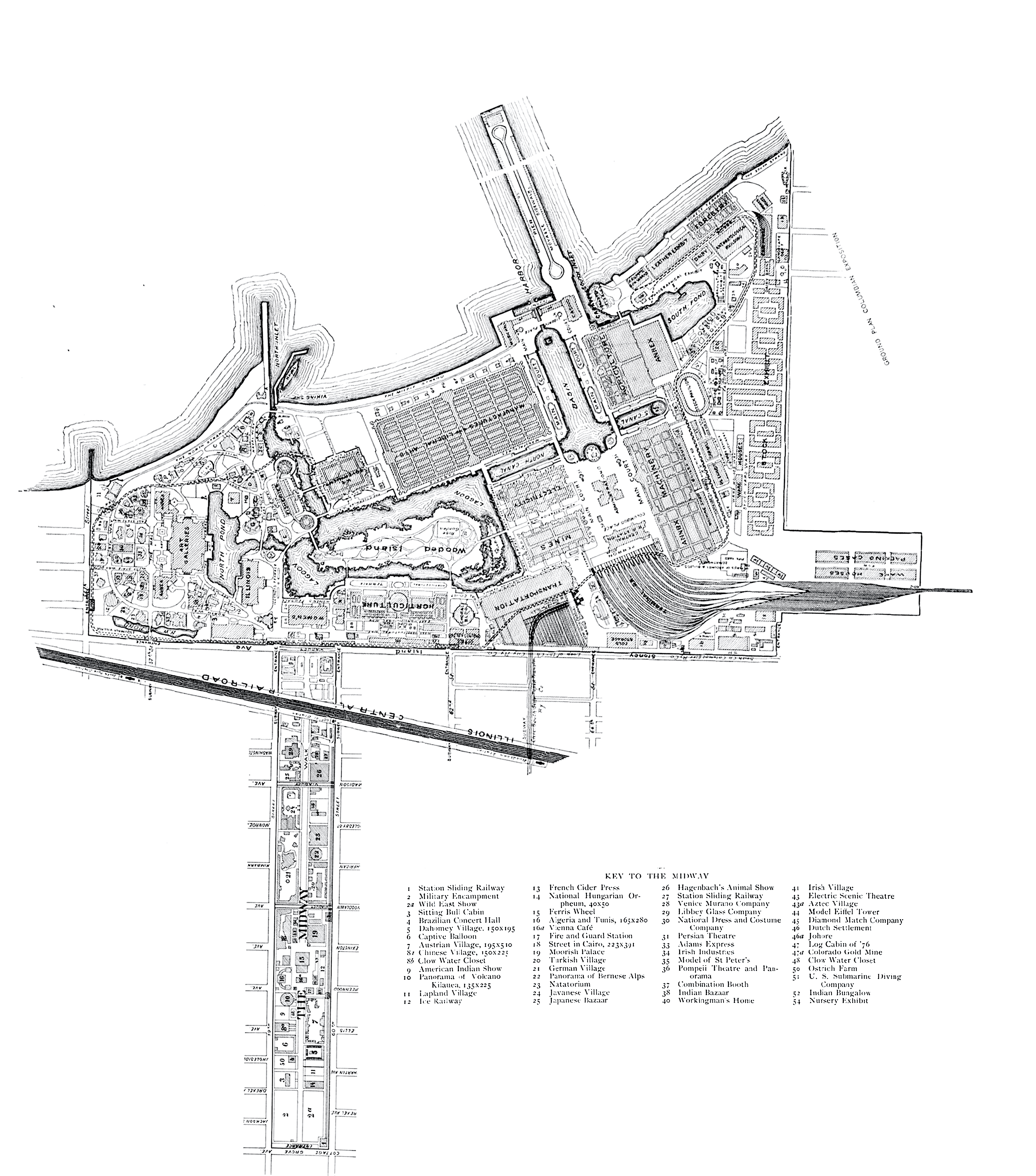 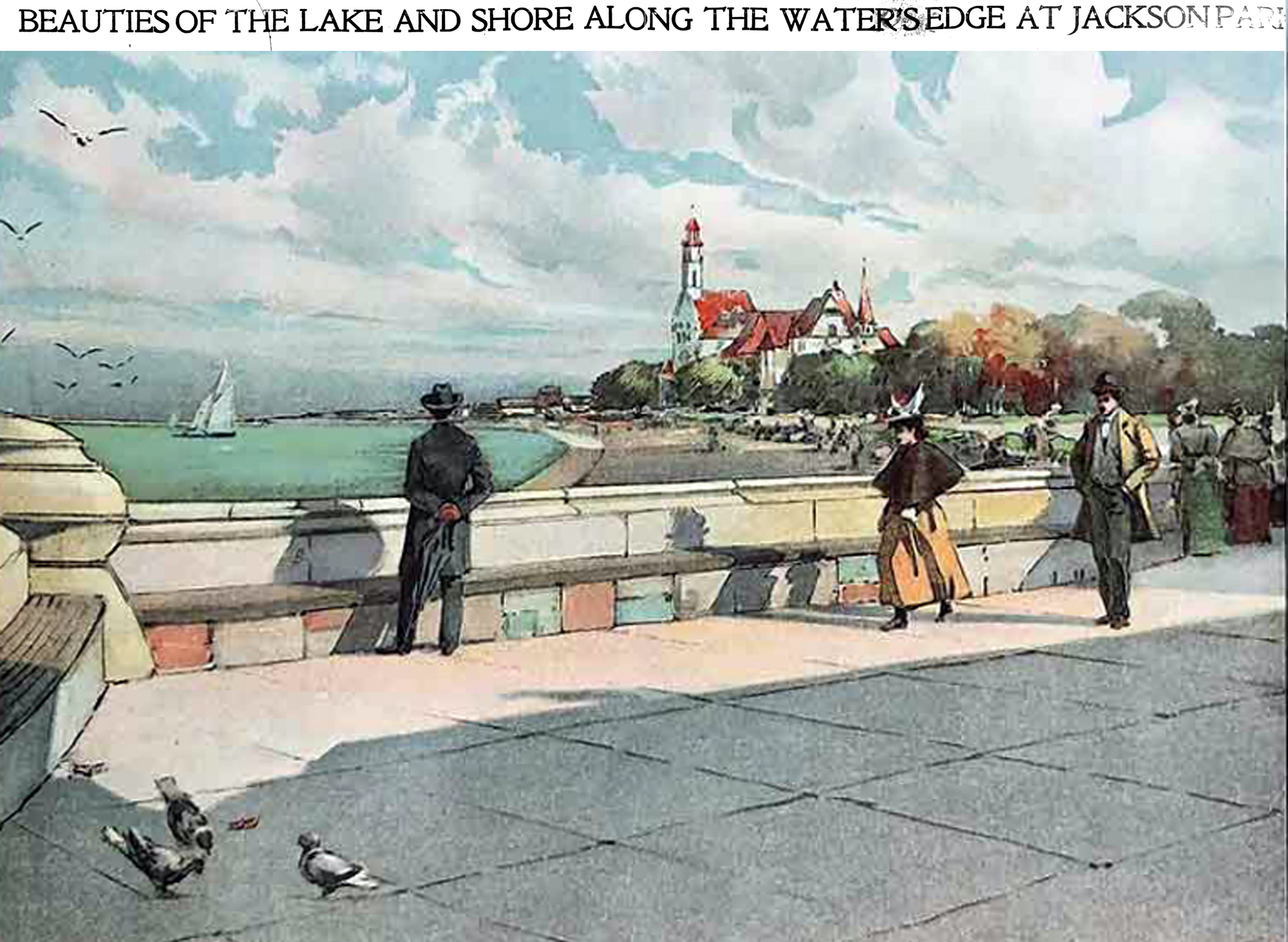 Study of the Stone Beach at Jackson Park—Drawn by H.G. Maratta.

Take it on a hot summer’s afternoon, or, better yet, on one of the sweltering evenings of the last week, and there are few places in Chicago more attractive than the stone beach at Jackson Park.

This is the wheelmen of the South Side well known, for since the beginning of the warm weather there has been no lack of popularity for that portion of the Lake Michigan beach. As there is nothing there to draw the crowds that come, except the beauty of the place and a chance to sit down and admire it, the very size of the throngs constantly gathered on the east edge of the park is one of the strongest arguments possible for its scenic attractions. Altogether, the beach at Jackson Park is well worthy of being ranked high among the wonder spots of this city.

The stone beach during the World’s Fair times only reached to Fifty-ninth street, but has been extended since to practically the entire waterfront of the park. The part which is so frequented by pleasureseeker, however, extends from Fifty-sixth street to Fifty-ninth street in a graceful curve. At the north end is the old stone pavilion, used during the World’s Fair as the Iowa State Building and famous for its exhibit of corn and grains; now a shelter for people in the park.Near the south end of the beach is the German Building, more beautiful now that even in the height of its exhibition lister. The waves have washed a great deal of sand in on the south end of this curving shore, making a most attractive bathing place, which the park authorities have in mind for another year. All around the swing of the water’s edge runs a cement sidewalk, along which have been placed by the foresight of the South Park Commissions scores of benches.

These straight-backed wooden benches are hard and there is plenty of green grass and inviting trees a short distance back from the water, but the seats are astonishingly popular. Especially is this so in the evening, when the usual condition is to have every particle of sitting space taken and dozens of couples looking for a chance to rest. The scene then, when the hundreds of stationary and moving lights from the bicycle lanterns combine with the grandeur of the dimly seen lake, is one to be remembered.

But if the the evening view of the Jackson Park beach is the more impressive, the day scene is certainly the most beautiful. Then the matchless charms of Lake Michigan are fully displayed. In the evening there is something awe-inspiring about a body of water so great that its limits in all directions are lost, and especially on a still night when the steady movement of the ground swell seems like the regular breathing of some giant creature. Yet, because the eye-sight carries so short a distance, a large part of the beauty of the scene is lost. The spray from the little waves which are running races down the length of the beach; the sails or smoke of passing vessels; the graceful curve of the shore in the distance, and the vivid colors of sky and grass and water, all add charms which it would be a mistake to miss. 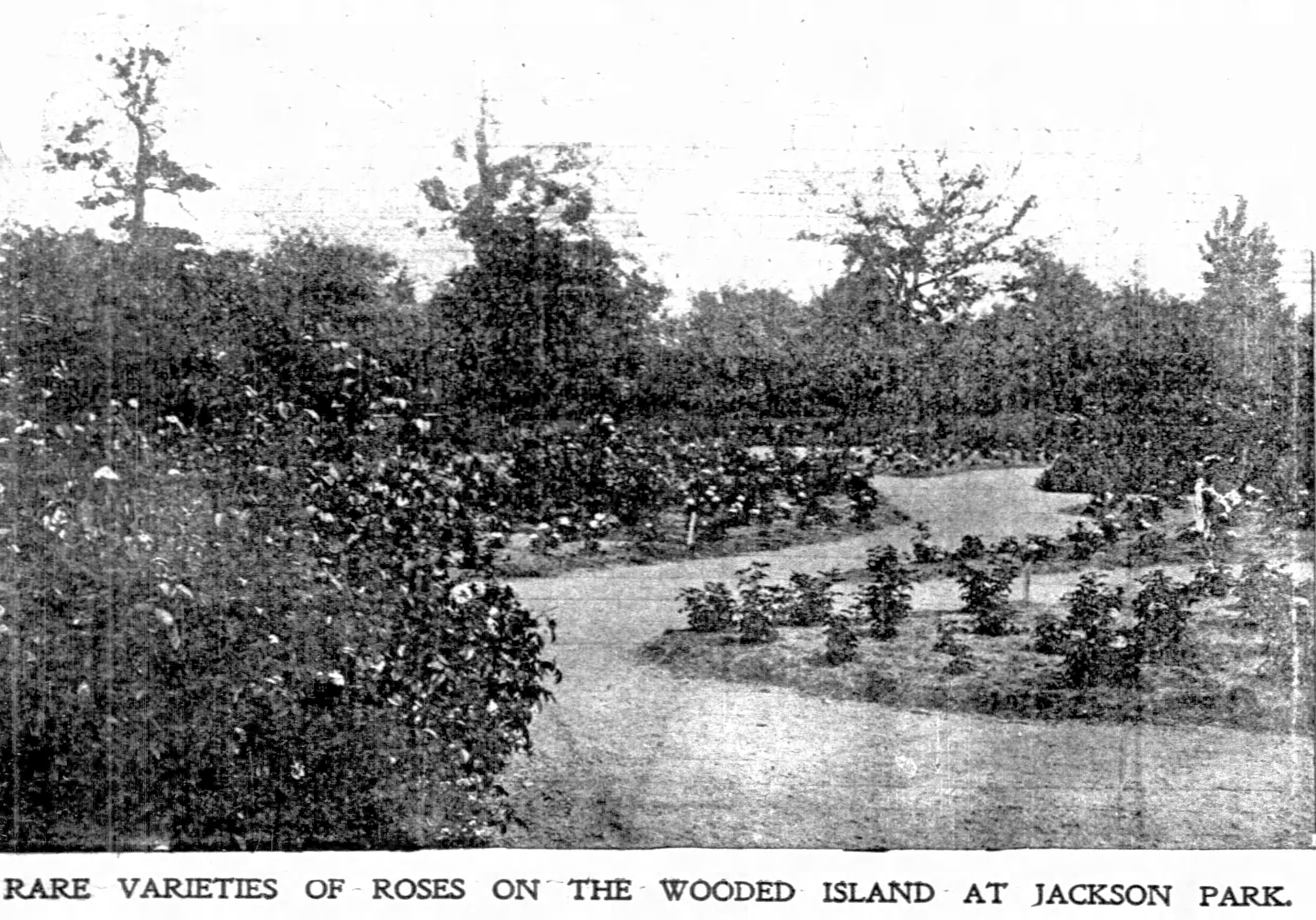 For this reason the day scene at Jackson Park beach has been selected for reproduction in this issue of The Sunday Tribune as offering greater possibilities for illustration than the night time outlook. It is the third in The Sunday Tribune’s series of pictures of the most beautiful and characteristic of the many scenes about Chicago. As before H.G. Maratta has made the sketch of the view which is reproduced by the half tone process.

Jackson Park occupies a unique position among the Chicago parks. Although originally one of the earliest to be developed and brought to a state of cultivation in its northern portion, the World’s Fair has made it the last of the public gardens to be fitted for the people’s use. On this account it is much more modern in character than the others, and has less natural beauties and more artificial embellishments.

But with all its level character and high buildings, Jackson Park must be ranked high in the scale of beauty. Especially its eastern portion possesses one feature of attractiveness which no amount of artificial environment can harm—Lake Michigan. The stone beach built along its edge would have in some measure changed the appearance of the shore had not the constant action of the waves carried in enough sand to form its own natural border further out. It is this touch of nature, well aided by the artifice of the landscape engineer, that has made the eastern portion of Jackson Park so attractive.

Along the shore in the northern portion of the park are a dozen scenes and spots worthy of being put into a picture. In fact the main difficulty experience by the artist is not in finding a suitable view for his work, but in selecting the best out of the large number of available places. The scene selected for reproduction in The Sunday Tribune is taken from the pavilion at the north end of the stone bridge looking south. In the foreground are the benches, stone beach, and waves. Beyond is the greaceful cyrve of the shore, the roadway, the German building, and the willow grove. In the distance are shown the piers, horizon line on the water, and the general features of the park. Altogether the view is one of the gems of the South Side. 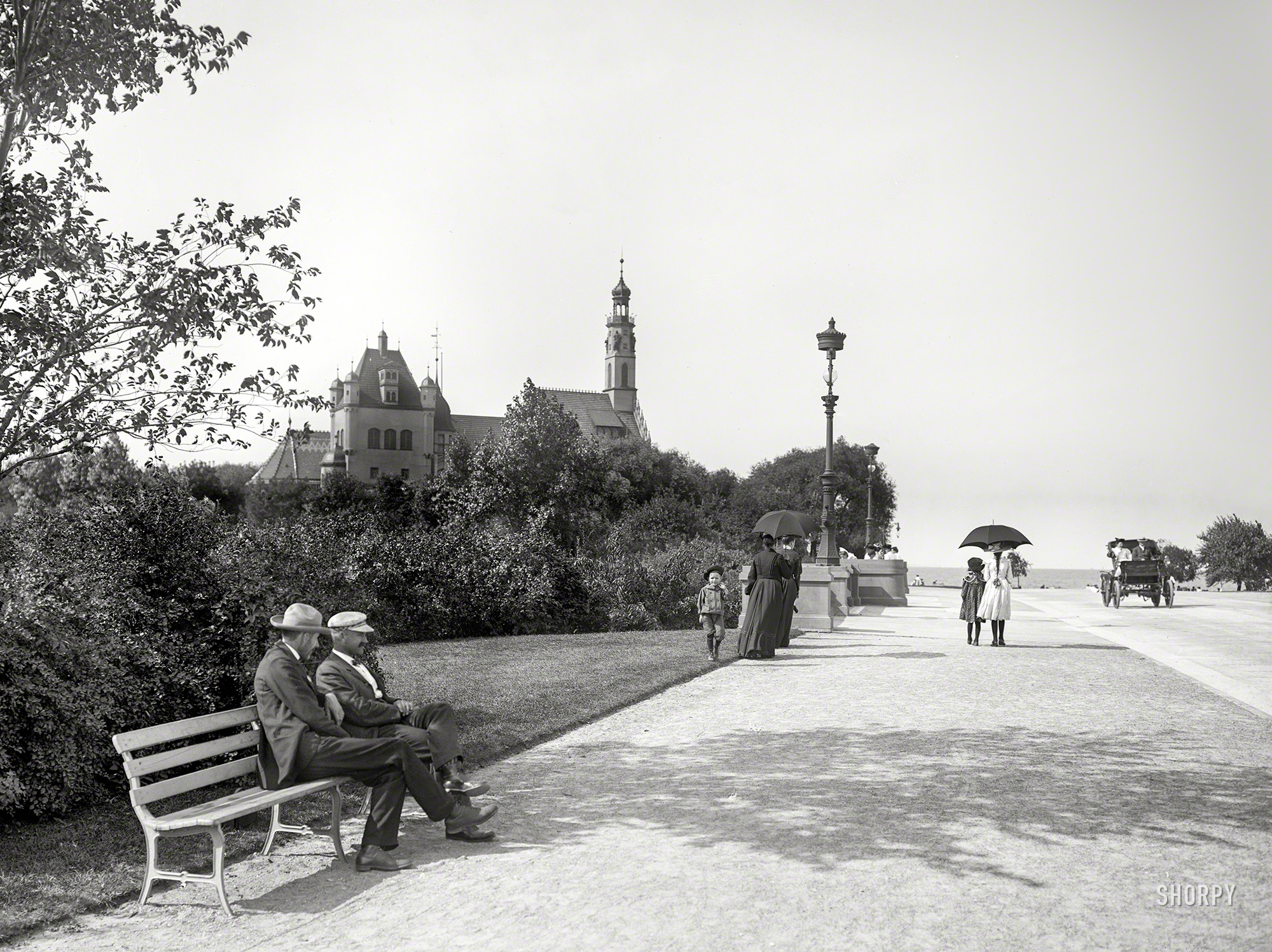 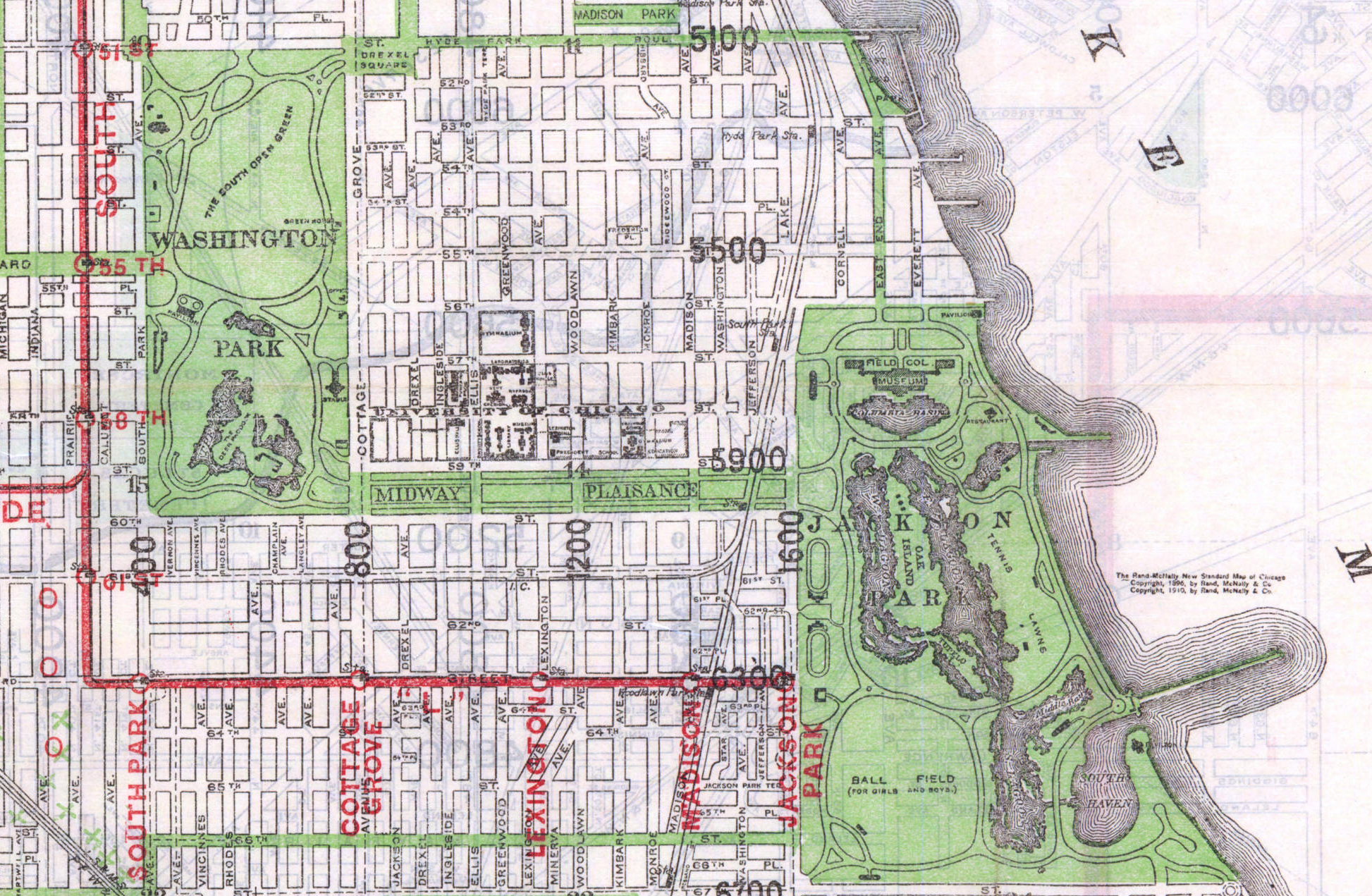