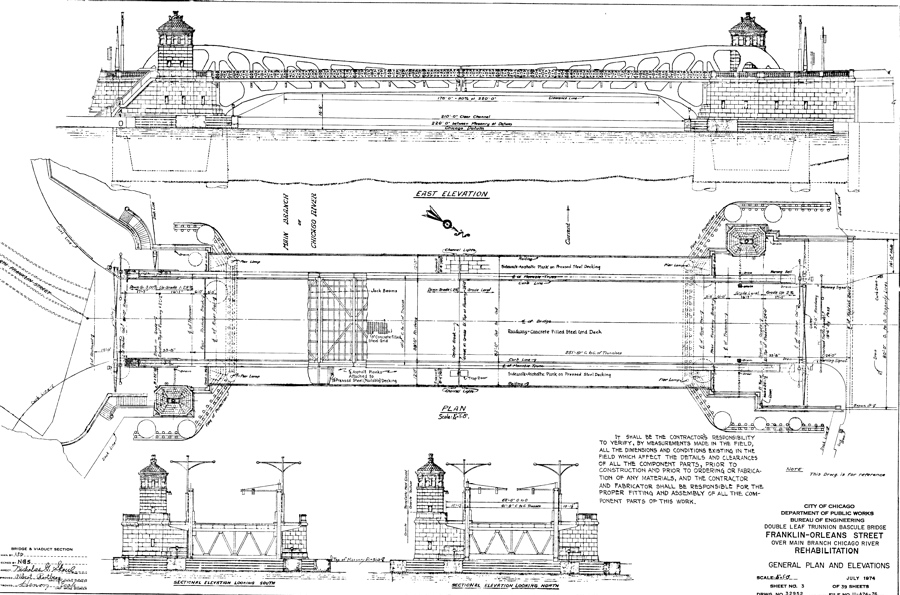 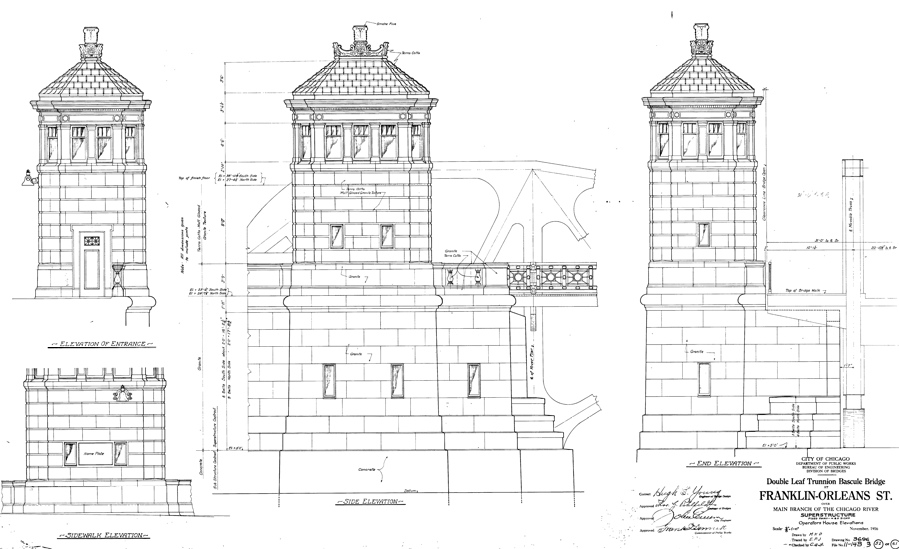 Plans for the Franklin-Orleans Bridge
1916 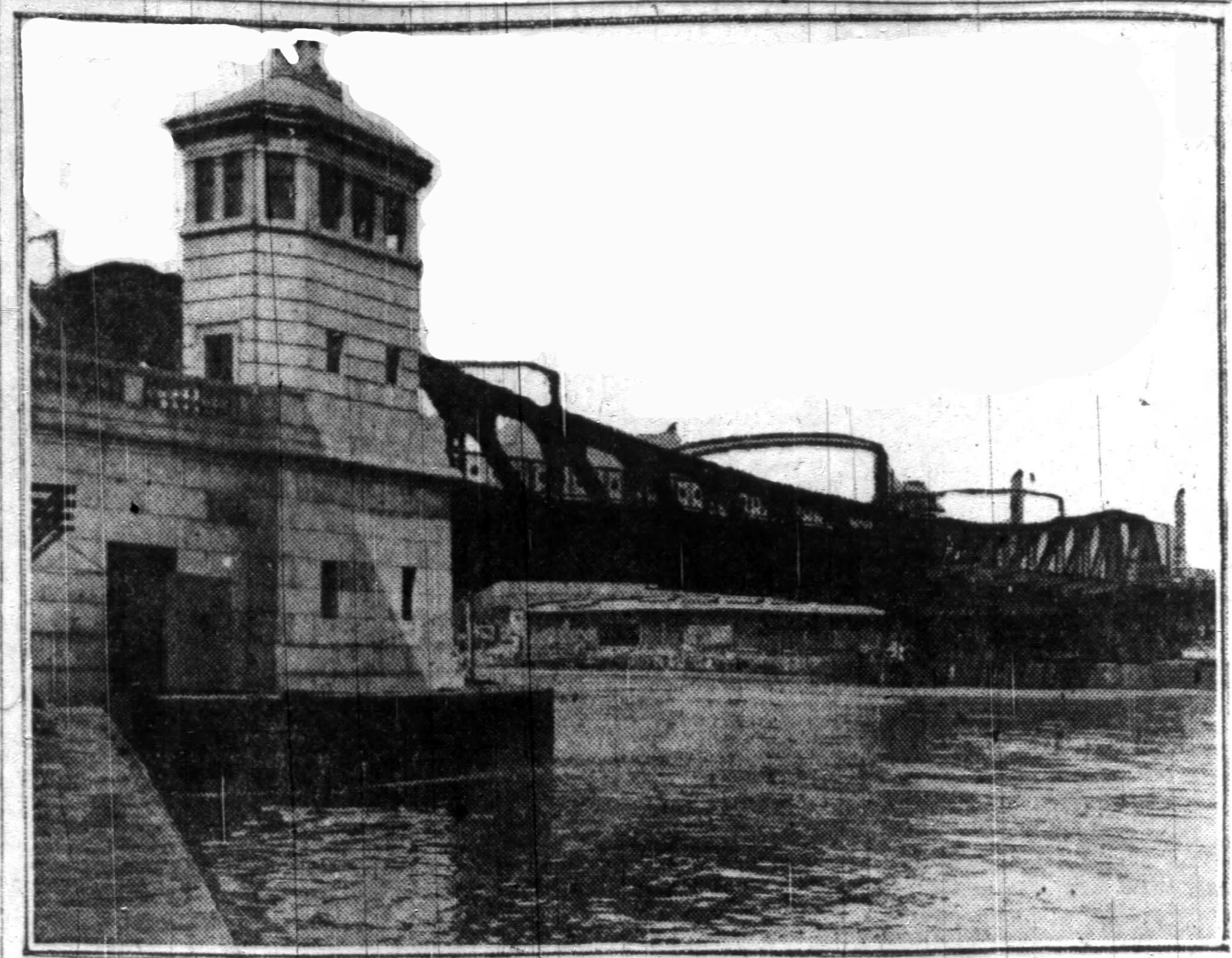 The new $1,000,000 Franklin-Orleans street bridge as it appeared yesterday.

The new structure $1,000,000 Franklin-Orleans street jack-knife bridge was lowered yesterday for the first time to permit workmen to put the finishing touches on the structure.

The bridge will not be ready for use before Oct. 1, as the Franklin and South Water street approaches are only about half completed.

Only a few engineers and contractors were present yesterday as the machinery began to operate and the two huge spans met with a click in the center of the river. Considerable work remains to be done on the bridge itself before it will be ready to bear traffic. 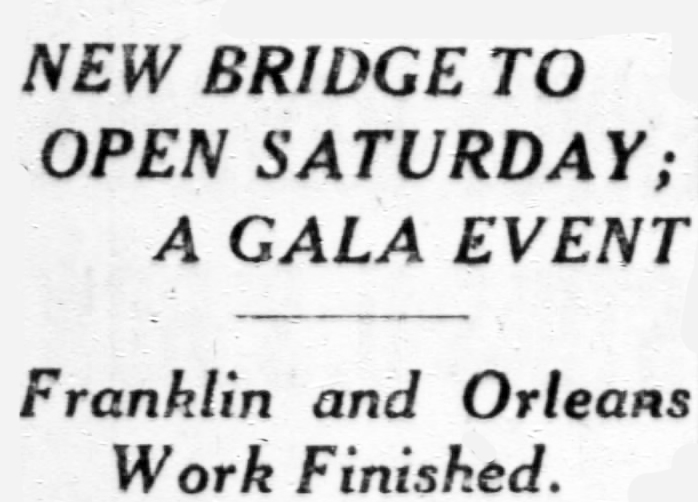 The improvement includes the new $1,000,000 Franklin-Orleans double leaf trunnion bascule bridge, with 210 feet of clear channel between its piers. It opens up to a new and greatly needed traffic artery between the loop and the northwest side.

Four Approaches from North.
Four north side approaches to the structure, spreading fanlike into the business and warehouse district, north of the river, will handle much traffic which now passes over the congested Wells and Lake street bridges.

More Than Three Years Building.
The improvement was authorized by the city in March of 1916. Actual construction began in May, 1917—three and a half years ago—and the work was hindered at times slighted in favor of the work on the boulevard link.

The opening of the improvement is to be made the occasion for a celebration similar to that of the boulevard link bridge. Grand stands will be provided for spectators at both ends of the bridge and musicians will play as the mayor and officials of the bridge association cross in automobiles.

The Franklin-Orleans Bridge association was largely responsible for shaping public opinion to make the improvement possible. James H. Channon, president of the association, Edward Mohr, Jamkes F. Finnegan, George R. Durgan, Hampden Winston, and other members of the association will take part in the celebration. 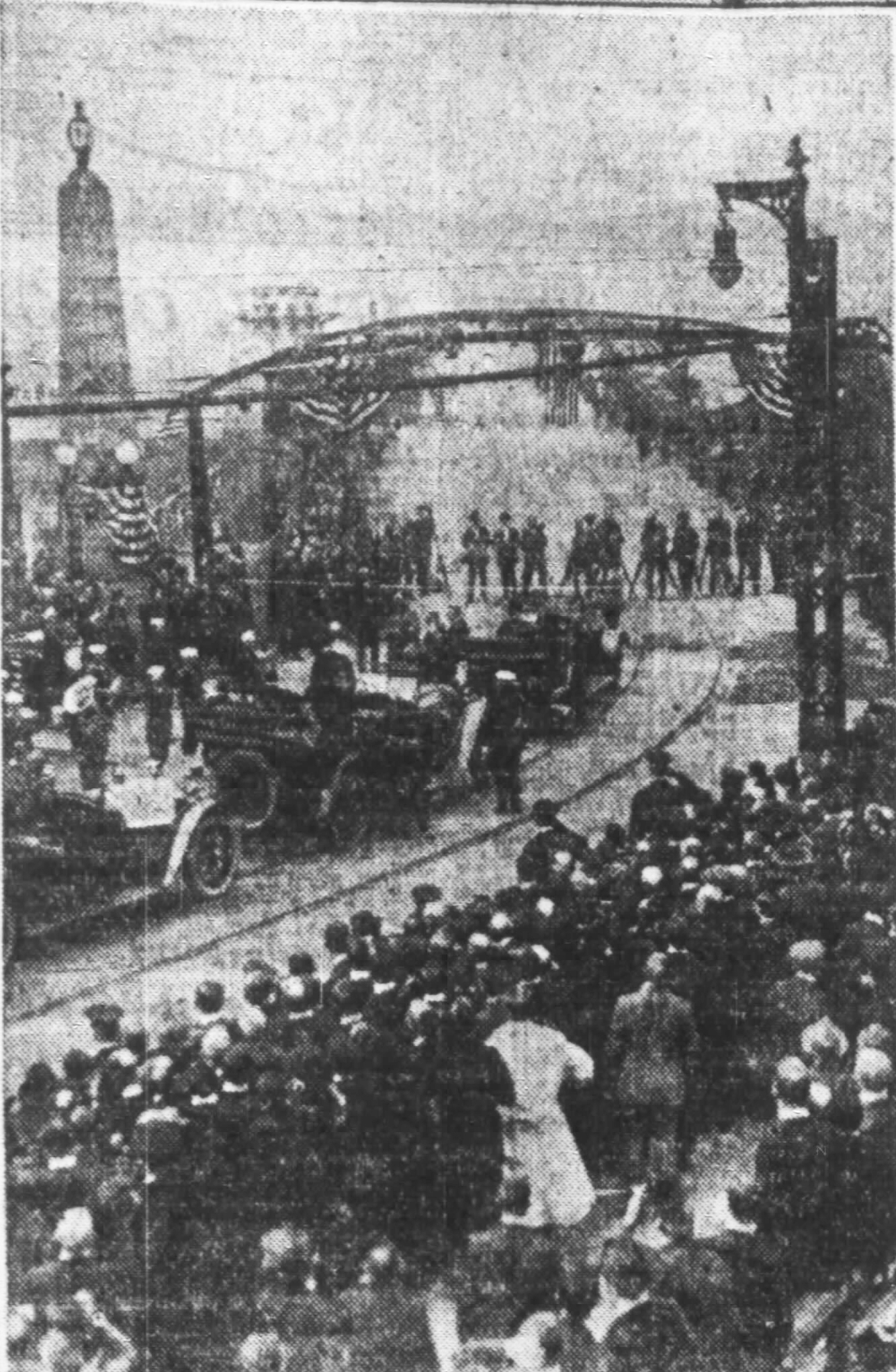 The photo on the right is the scene at the new $2,000,000 Franklin-Orleans bridge was opened to traffic yesterday. Mayor Thompson is just about to cut the ribbon and admit traffic to the span. The autos and trucks are part of a parader. The view shows the bridge from the south, looking north.

BOMBS, daylight fireworks, and a parade of thousands of gayly decorated trucks and automobiles signalized the opening of the new Franklin-Orleans street bridge to traffic yesterday.

The bridge, which with its approaches cost nearly $2,000,000 and has been four years in building, affords a long needed direct connection between the loop and the warehouse and business district of the near northwest side.

Nearly every large truck user in the city was represented by from one to a dozen motor trucks in the parade. The bridge is especially adapted to the use of heavy vehicles and it is expected to divert much of the heavy traffic which now jams the Wells and Lake street bridges.

Thousands watched the parade, which was led by Mayor Thompson and James H. Channon, president of the Franklin-Orleans Bridge association, which has worked nearly ten years to bring about construction of the bridge.

The trucks and automobiles met in Grant park and the parade wound through the loop via Monroe, State, Randolph, and Franklin streets to the bridge, where the red, white, and blue ribbon which stretched across the approach was broken by Mayor Thompson and the procession passed over. 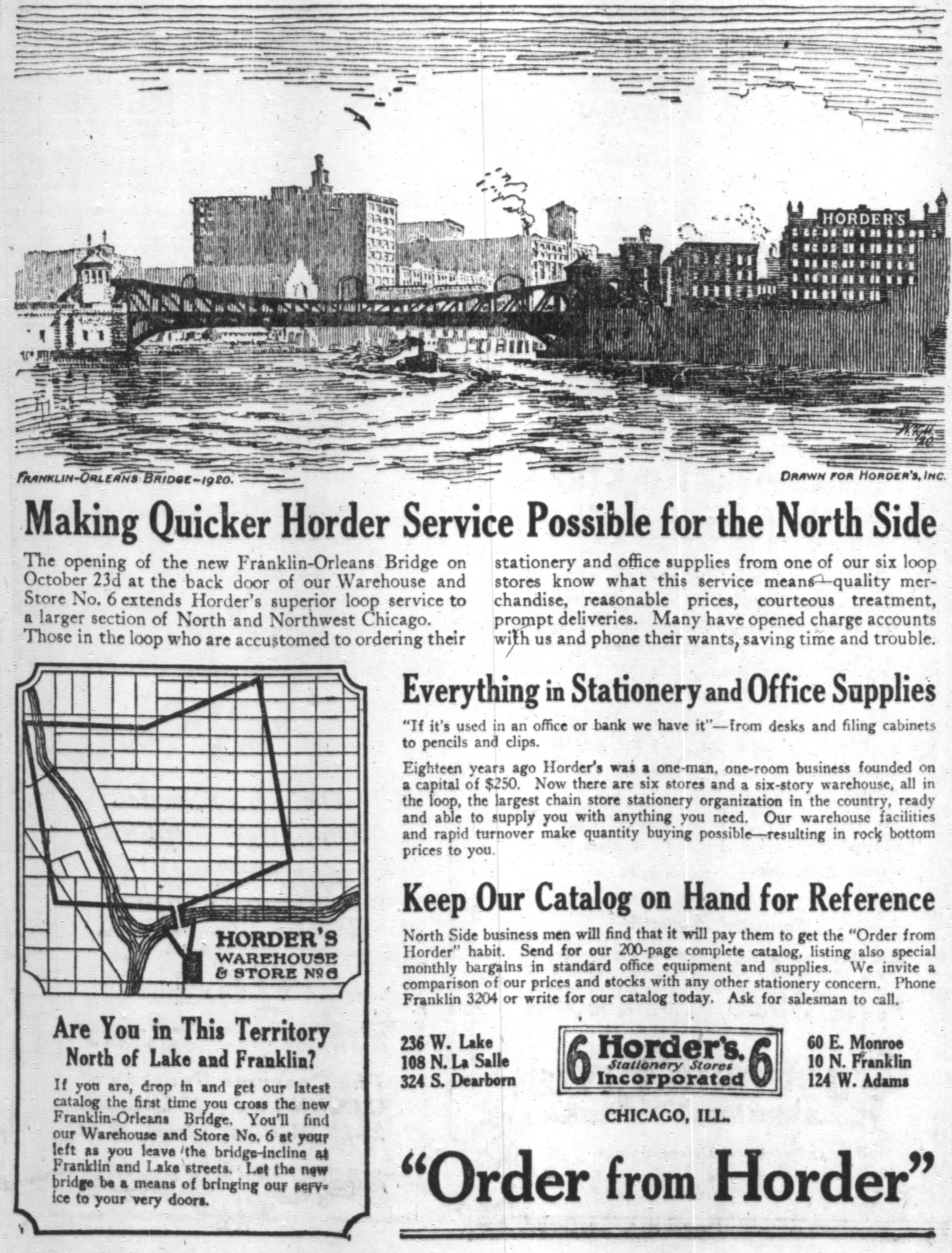 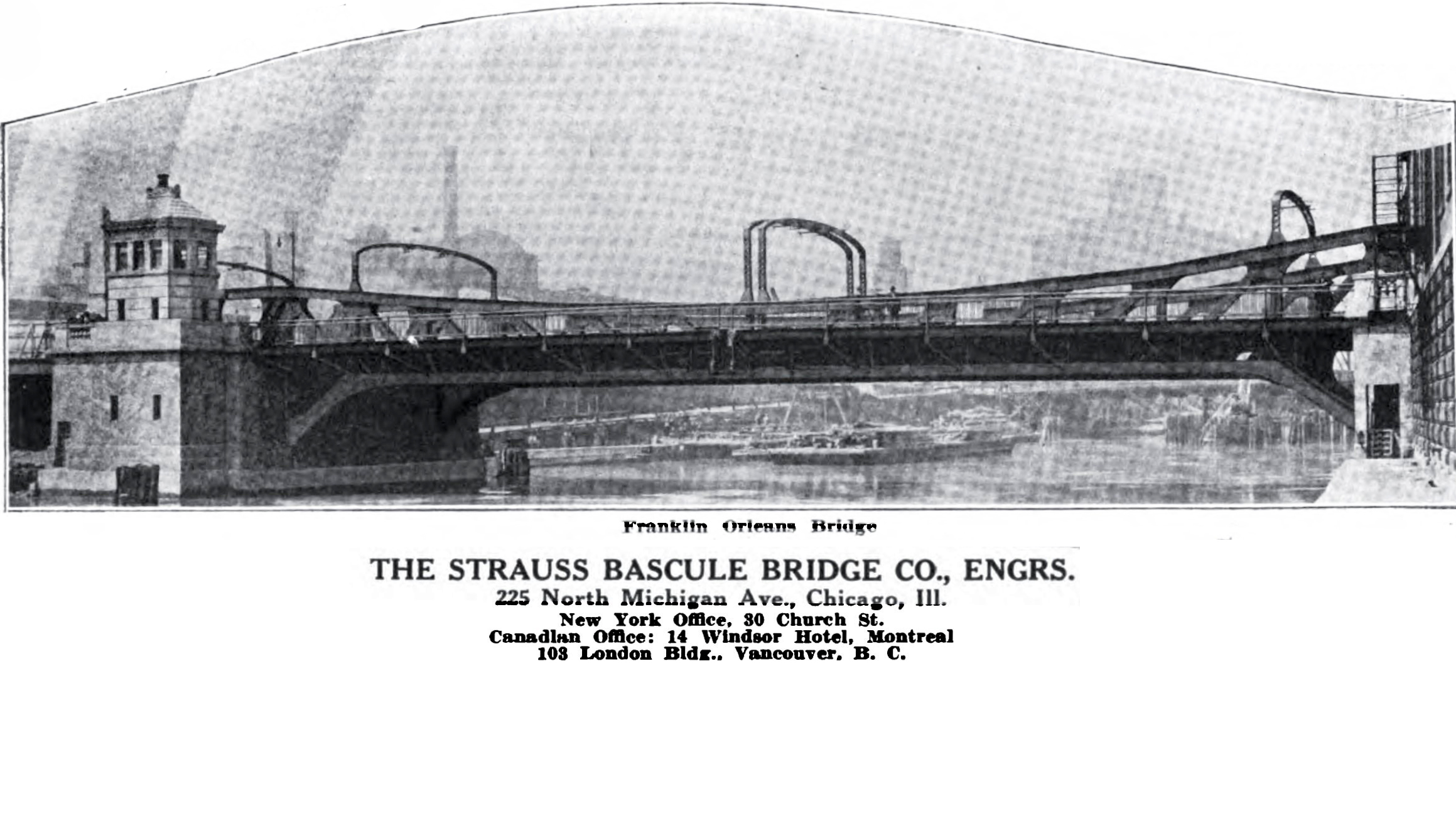 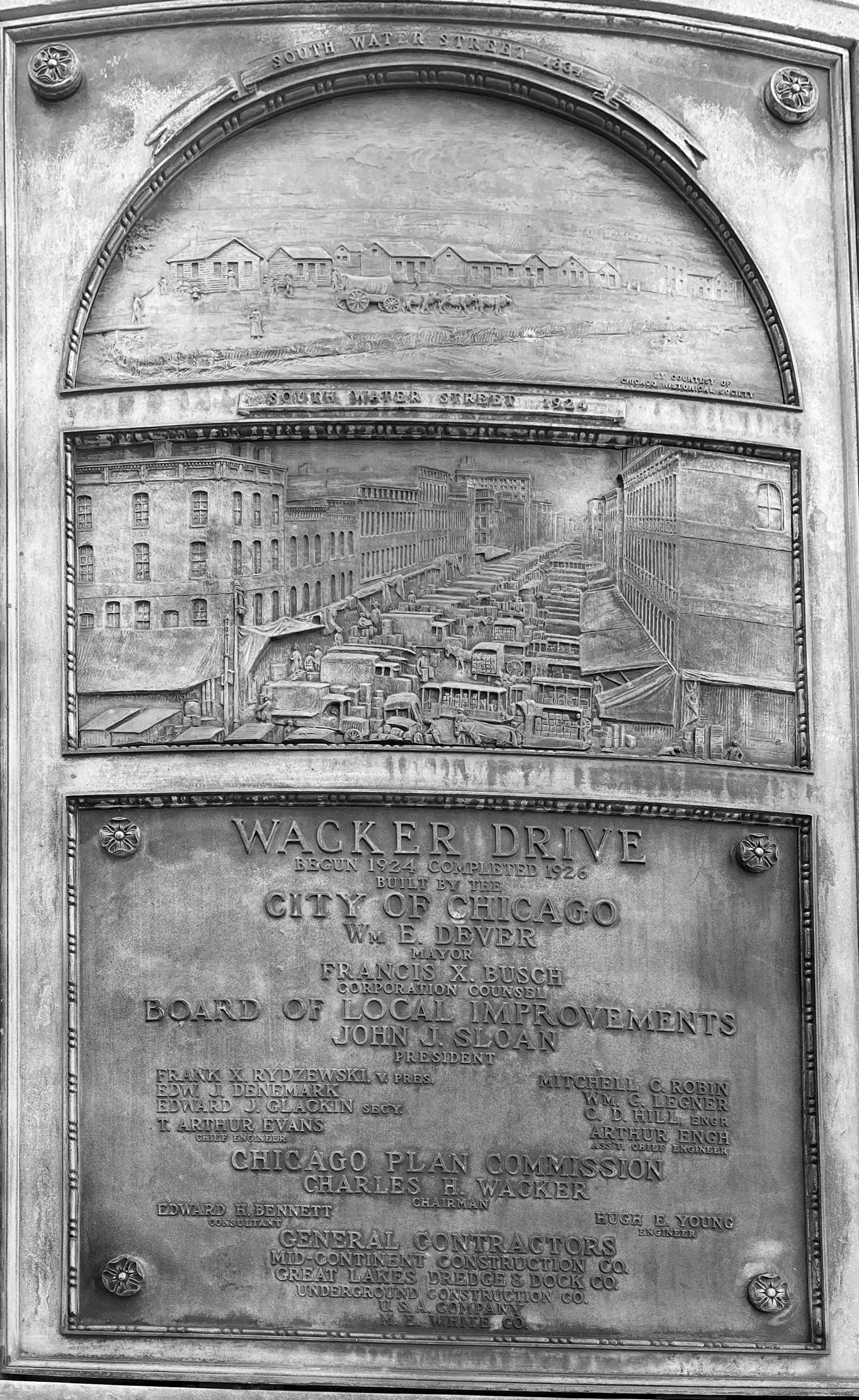 The opening of the Franklin-Orleans Bridge coincided with Firestone’s national campaign called “Ship By Truck.” 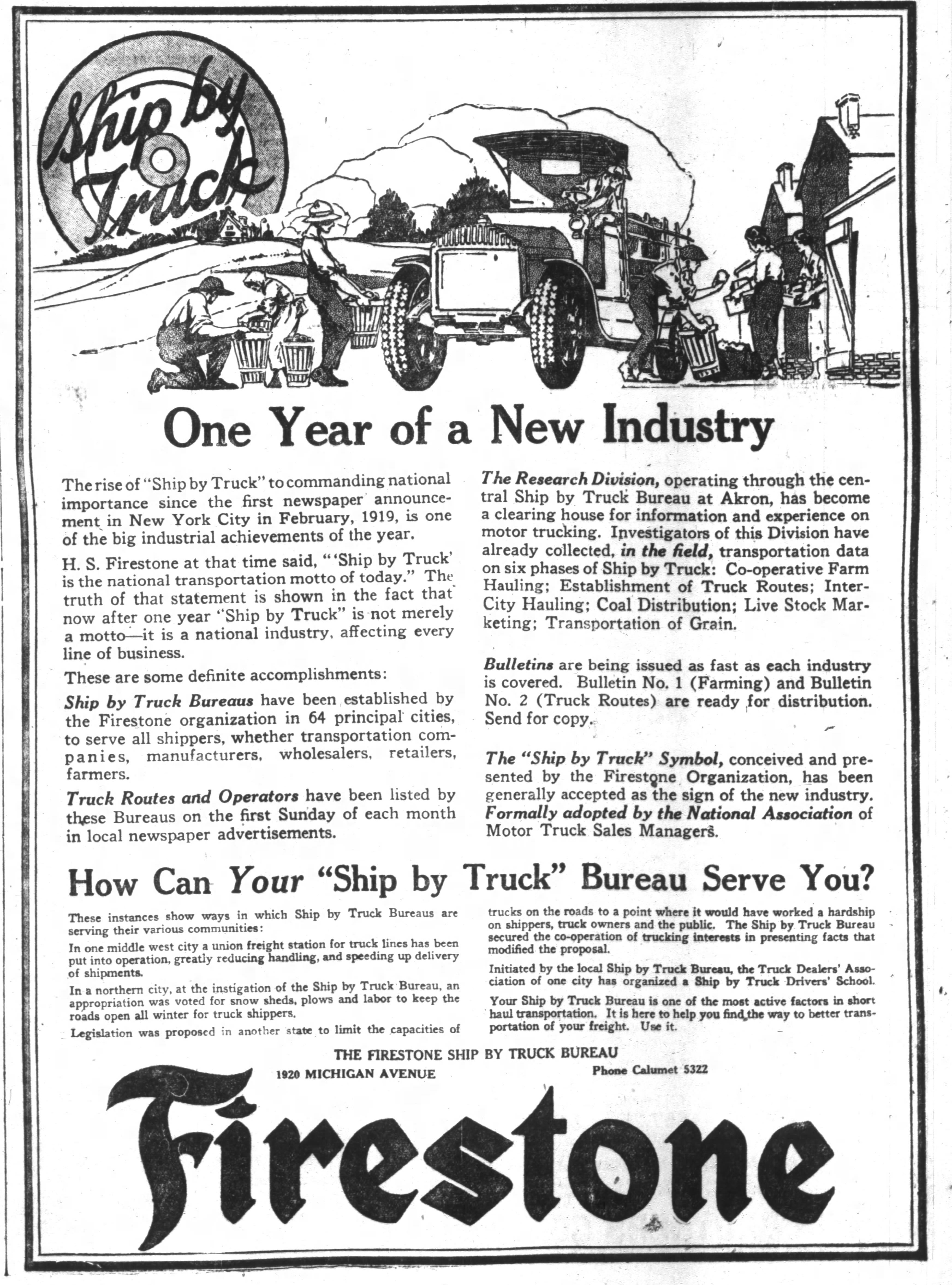