FOR THAT SUBTERRANEAN THEATER.
Hardy Company Duly Incorporated to Put the Novel Plan in Operation.
The Hardy Subterranean Scenery company was incorporated yesterday with a capital of $300,000 and with John J. Caldwell, George Wilsin, and Charkes B. Pfaff as incorporators. This company will build the novel subterranean theater described recently in The Tribune, in which a skillful arrangement of moving walls will give the impression that they are being lowered to a great depth below the earth’s surface.

The plans, completed so far, include the arrangement of five underground caverns, showing a coal mine, an ice cavern, a scene from Dante’s Inferno, a submarine view, and a reproduction on a smaller scale of the Mammoth Cave.

The idea was evolved by a young Frenchman, Mr. Hardy. whose name is given to the company. A number of prominent and wealthy men are interested in the enterprise, and it is the intention to have the theater completed by the time the World’s Fair buildings are dedicated next October. 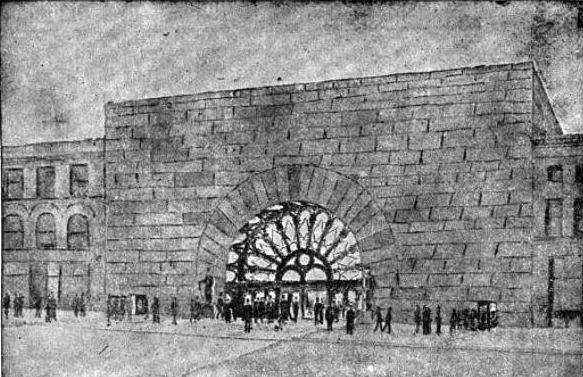 The Hardy Subterranean Theater is located on Wabash Avenue, south of Sixteenth Street. Here sight-seers are given an opportunity to see the marvels hidden underground, by means of an elevator which apparently descends to great depths Though the elevator car (a miniature theatrical hall in itself, accommodating comfortably one hundred people) only moves up and down in a shaft about fifteen to twenty feet deep, the illusion is made perfect by a combination of mechanical devices, and the effect produced is a real descent about 1,000 to 1,200 feet under the surface of the earth.

The elevator car moves into the center of a circular platform, carrying different stages arranged with appropriate scenery and living actors. The platform turns on rails, and is made to revolve and bring successively each scene in sight of the elevator car at the different stops made by the car in its descent.

Entrance to the subterranean scenery is obtained through a hall, decorated to resemble a chamber of stalactites, having a stage at one end, where variety performances are given every afternoon and evening. Admission to the Hardy Theater, 50 cents. 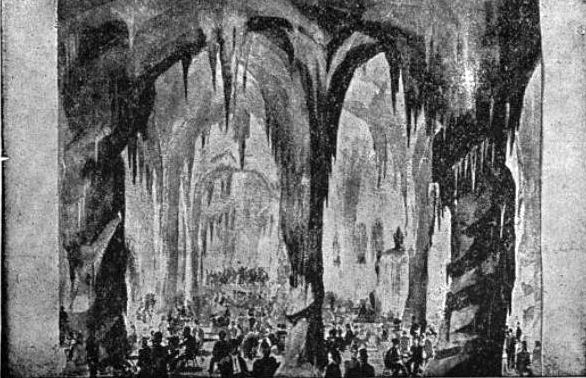 Hardy’s Subterranean Theater gives to the sight-seer an opportunity to see the marvels hidden underground by descending in elevator-cars to a depth never before reached. Although the car only moves up and down in a shaft about twenty feet deep, the illusion is made perfect by a combination of mechanical devices, and the effect produced is that of a real descent of 1,200 feet. Stops are made at different places, showing such scenes as the sewers of Paris, quartz-mines (with miners at work), an explosion in a coal-mine, caverns inhabited by prehistoric man, a scene in the catacombs of Rome, and a sunken ship with divers at work. Admission, 75 cents to $1.25.

It is said that $80,000 worth of hydraulic machinery is stored in Hardy’s Underground theater on Wabash avenue. A bed of quicksand effectually barred progress, and possibly failing financial resources had quite as much to do with the abandonment of the curious project.