This club is, as its name indicates, an athletic organization, but, as may be presumed from the picture of its house, it is devoted in no small measure to the amenities of social life. A home so extensive, and even elaborate, would not be required solely for athletic purposes; and still, having gained great prestige and reputation upon the water, this club never loses sight of its “chief object in life,” but simply adds to its attractions club features which interest the members during the season when out door sports are out of the question.

The intention was to provide a house which would combine all the essentials in the way of club rooms, and at the same time furnish an unusual area of balcony and observatory space for the use of members during the summer months, when aquatic sports are in progress on the lake. The site is so commanding that the entire harbor and lake front, and much of the city, can be viewed from the observatory or lantern of the club house.

The ground dimensions are 90 by 40 feet, and the building rises to the height of three full stories, and is surmounted by a gabled roof and tower. The material used is brownstone and pressed brick, while the balcony gables are finished in bronze and slate. The roof is covered with red slate, with coping of galvanized iron. The main entrance is through an archway and loggia paved with Minton tiles, and opens into an entrance hall from which springs a grand stairway in antique oak. An elaborate mantel of the same material occupies one side of this handsome hall, the decorations of which are in Turkey red and bronze. The other apartments on this floor are the grand parlor, library, directors’ parlor, card room, billiard room and coat room, all handsomely frescoed, elegantly furnished. The ball room, with a twenty foot ceiling, a striking gallery and a thoroughly equipped stage for amateur theatrical purposes, is frescoed in soft buff tints and bronze. Large doors give egress to the main loggia, which in warm weather is thus made pleasantly tributary to the ball room. On the same floor are the ladies’ parlor, gymnasium and superintendent’s office. The spacious basement, eleven feet in the clear, is given up to bowling alleys, pool tables, dressing rooms, baths, steam heating apparatus and other conveniences. 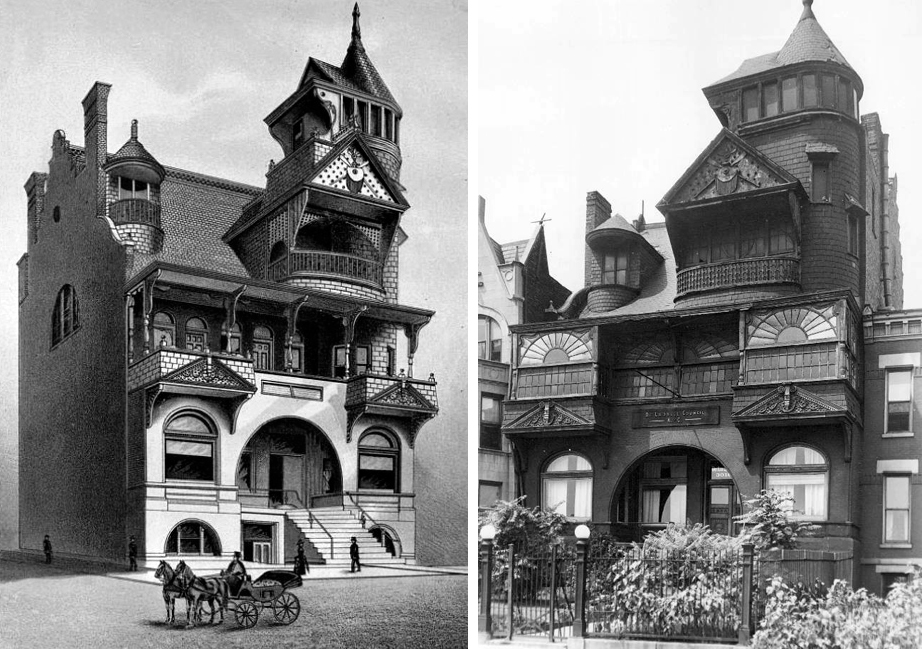 The Farragut Boat Club was organized in 1872, and, as its name indicates, for the purpose of promoting the interests of boating. Beginning with a limited number of members, and a small boat house at the foot of Twelfth Street, it has gradually increased until it has reached its present flourishing condition. The present club house (at 3016 Lake Park Avenue) was completed in the spring of 1886. It is a handsome building of brick, with stone trimmings, and consisting of two stories and a basement.

In the basement are the bowling alley, the pool room and the lavatories. The first floor contains the parlors, the reception room, the billiard room, the card room, and the library. The second floor is devoted to the dancing hall and a perfectly appointed little theatre, with a full stock of scenery and properties, and a seating capacity of four hundred.

A series of entertainments are given here each winter, and the Farragut Boat Club Theatricals have become famous, attaining as they do to a pitch of excellence rarely reached by amateur efforts. The boat house proper is a one story brick buildirig, at the foot of Thirty-third Street. The Club owns about twenty-five boats, including an eight-oared barge, four-oared shells, four-oared gigs, single and double shells, single and double training boats, and pleasure boats of all descriptions. The initiation fee to the Farragut is fifty dollars and the dues are twenty-four dollars a year.

The first softball game was played on Thanksgiving Day in 1887. The players played inside of a gym at Farragut Boat Club. The believed inventor of softball is George Hancock. The location was 3016-3018 Lake Park Avenue. This is now on the grounds of Michael Reese Hospital (now closed) on the near south side. The club house, what was left of it, was demolished in 1952 (circa). There is a monument at the site placed there by some national or international softball federation.