< --Previous  Up  Next–> Chicago had three cyclorama buildings in 1884, five by 1891 and six panorama rotundas operated by six panorama companies in 1893. One is believed to have been located near the 1893 Columbian Exposition. 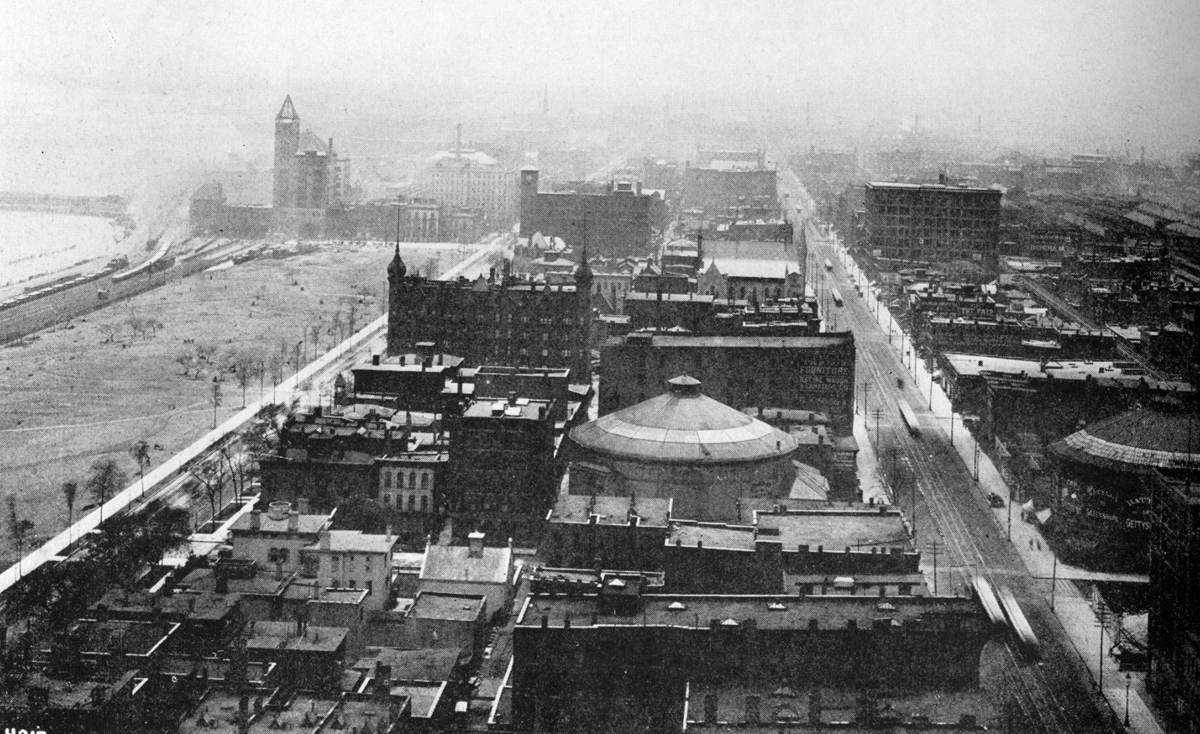 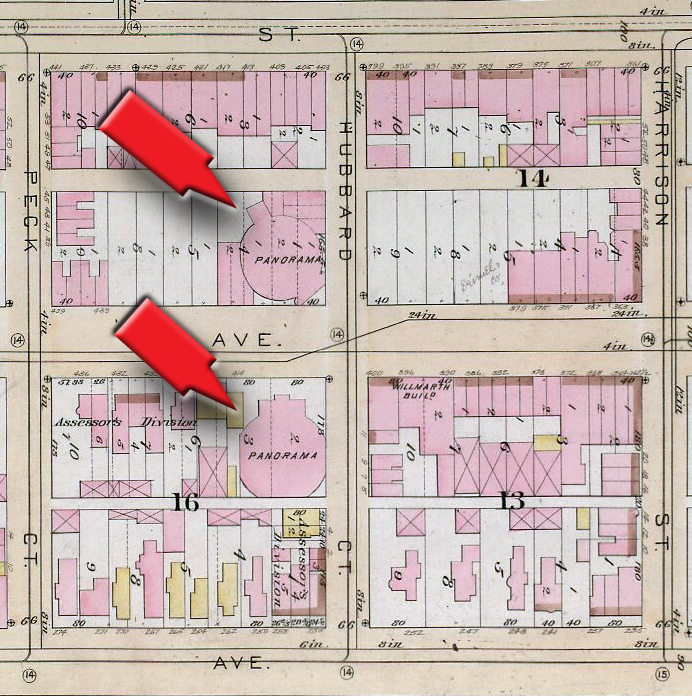 Battle of Gettysburg
The establishment and sudden spring into public favor of the Panorama of the Battle of Gettysburg, at the corner of Wabash avenue and Hubbard court, have been quite out of the usual fashion of the day. It is rare that any single amusement enterprise,— if, indeed, this can be classed as an amusement simply,—projects and erects a large and substantial building for its own use, and especially one wholly unfit for any other use, and it is quite as rare that any such scheme is entered upon absolutely without resort to any of the “circussing” advertising devices so common in our day. This one came among us so quiet and proceeded so unostentatiously in the erection of its building that next to nobody had any idea, as the building made daily progress, what it was designed for, and the most ludicrous conjectures were common. The very quietness of the proceeding, however, argued in its projectors the most absolute confidence, and the event has shown this confidence to be solidly founded. The panorama is universally conceded by all who have seen it to be the most extraordinary work of art ever seen in this city. To describe it in words is impossible. It must be seen in order to have any idea of its striking realistic effect.

The curious building, brilliantly illuminated by night with electric lights, with windowless walls, lighted during the day only through the roof without a single glaring poster to catch the eye of the passers along the streets, has become the center of attraction to the most intelligent and cultivated classes of the community to that extent that is often difficult to gain admission by reason of the throng. The moral is an obvious and encouraging one, for the stimulating influence of such an exhibition on the growth of a general public taste for the higher forms of art can hardly be overestimated.

The entrance fee to these remarkable illusions and pictures is 50 cents, and you may stay as long as you please, an interesting lecture being delivered meanwhile. Paris by Moonlight was the first cyclorama seen in Chicago. It was shown in the Exposition Building in 1875. Jerusalem, The Siege of Paris, Shiloh, and the Monitor and Merrimac have since been exhibited to admiring throngs. The artist who gained greatest celebrity in this work had the alarming name of Philippoteaux.

Paul Philippoteaux (1846-1923), principal artist and creator of the Gettysburg Cyclorama, first visited the battlefield in 1882. To prepare the project, he built a 30 foot platform on site to view the landscape. He studied War Department maps and conducted interviews with participants— Generals Hancock, Webb, Gibbon, and Doubleday, among others. He also relied on photographs of the battlefield taken by William Tipton. Philippoteaux first created a 1/10 scale oil study. He then sketched the entire composition in pen and ink upon which he drew grid lines and projected the drawing, with grid lines, onto the full canvas. The process of planning and executing the project took about two years. 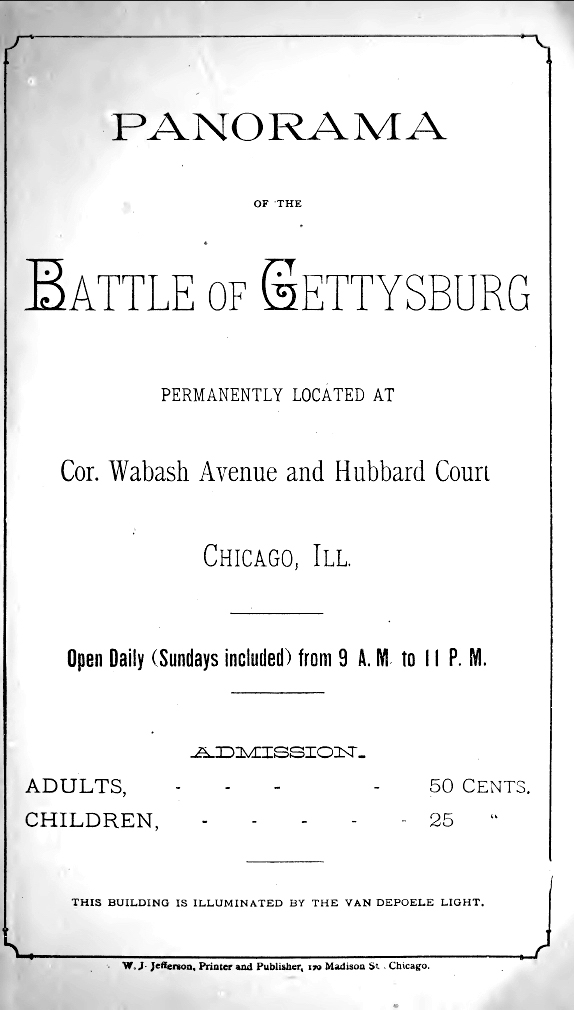 The effect of these creations was variously described as “simply astounding” and creating “a suspension of reality that took one‘s breath away.” It was called “so realistic it could be confused with reality.” General John Gibbon, who commanded a division at Gettysburg, extolled the virtues of the painting:

…you may rest assured you have got a sight to see before you die. It is simply wonderful and I never before had an idea that the eye could be so deceived by paint and canvas….The perspective and representation of the landscape is simply perfect….it was difficult to disabuse my mind of the impression that I was actually on the ground.

Detail of the Battle of Gettysburg 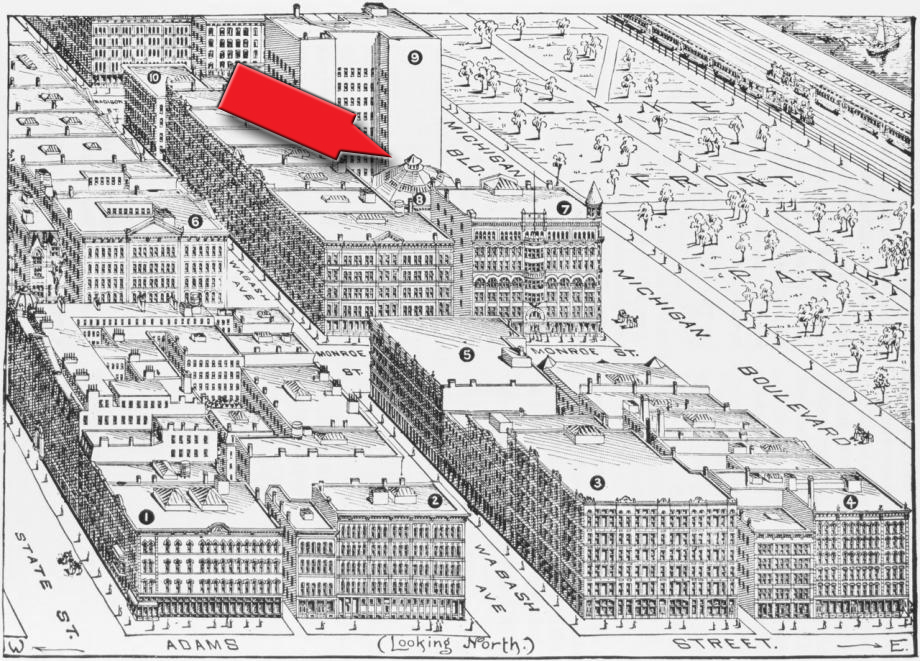 The northernmost is opposite the Art Institute, and represents the Chicago Fire. It is more truly the burned district as it appeared on the morning of October 9, 1871. It is accurately historical, and should be seen. The color, however, is far too low in tone, a truer effect being obtained by viewing it through red glass. Located on Michigan ave,, near Madison St., opposite the old Exposition building. This is a cycloramic building, formerly occupied by the picture of the Battle of Shiloh. Slides, roller skating, music by military band and novelties make up the entertainment. Open day and evening. Admission, 50 cents ; children, half-price.

The success of the Chicago Cyclorama generated imitators – at one time there were two dozen such paintings. But by the end of the 1880s, the cyclorama was no longer the attraction it once was.

The Chicago Cyclorama closed in 1890 but was refurbished for the Columbian Exposition in 1893. It closed in 1895 and was allegedly destroyed in a fire. 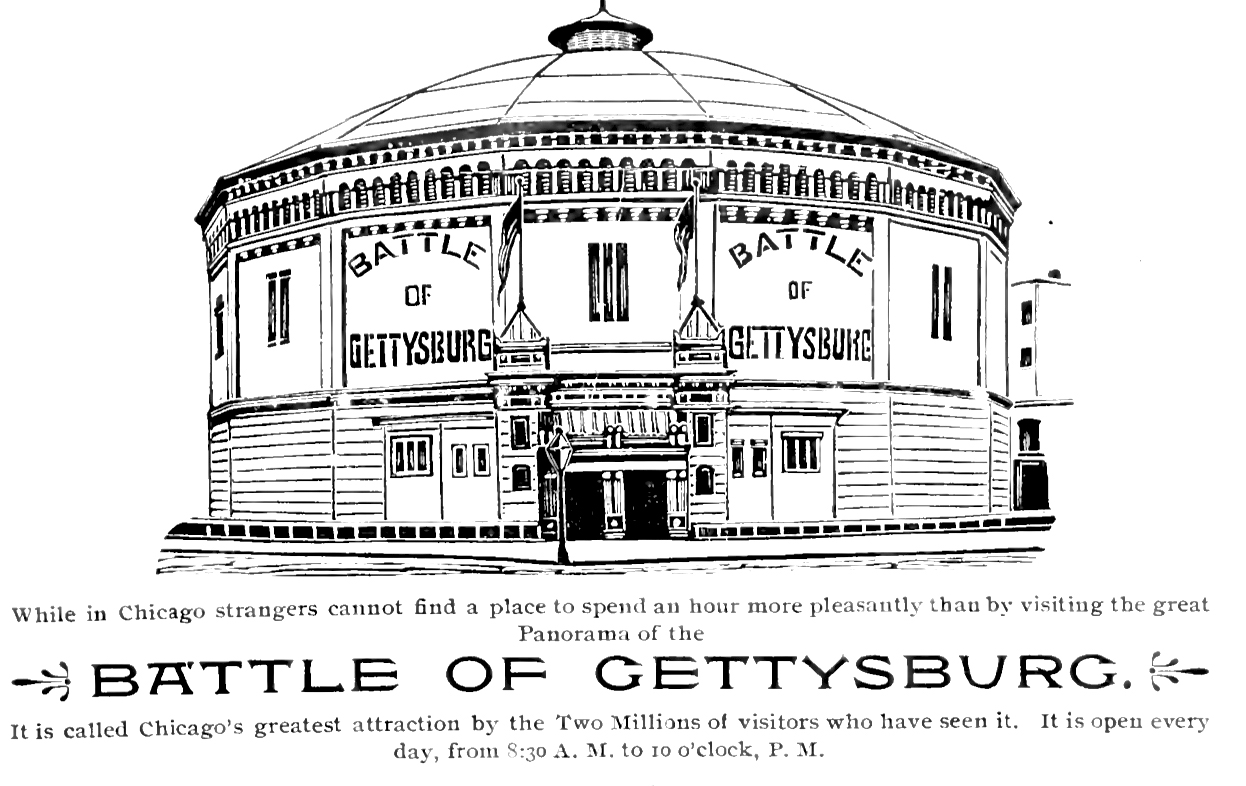 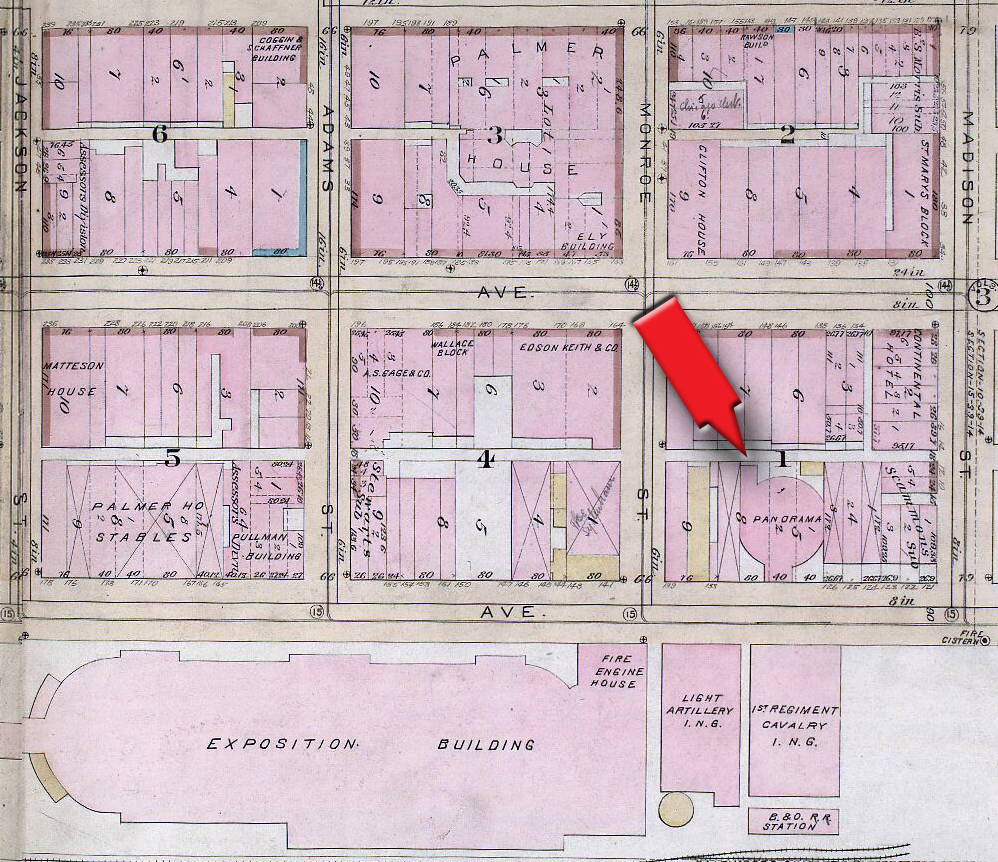 From the 1886 Robinson Fire Maps
Cyclorama Building on Michigan Avenue 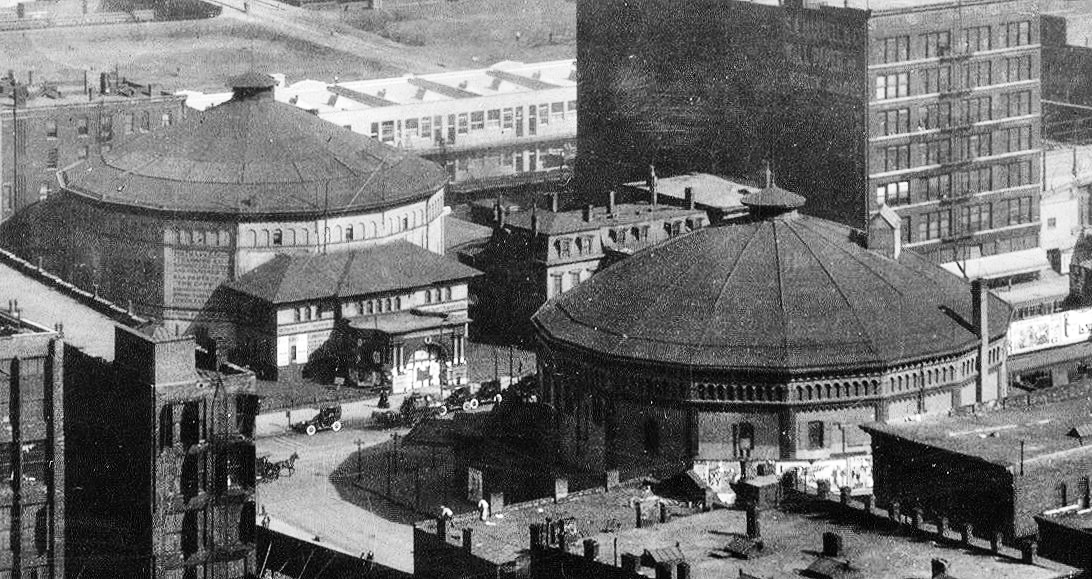 That Famous Battle Between the Monitor and the Merrimac.
There will shortly be placed on exhibition at the Shiloh Building on Michigan avenue. 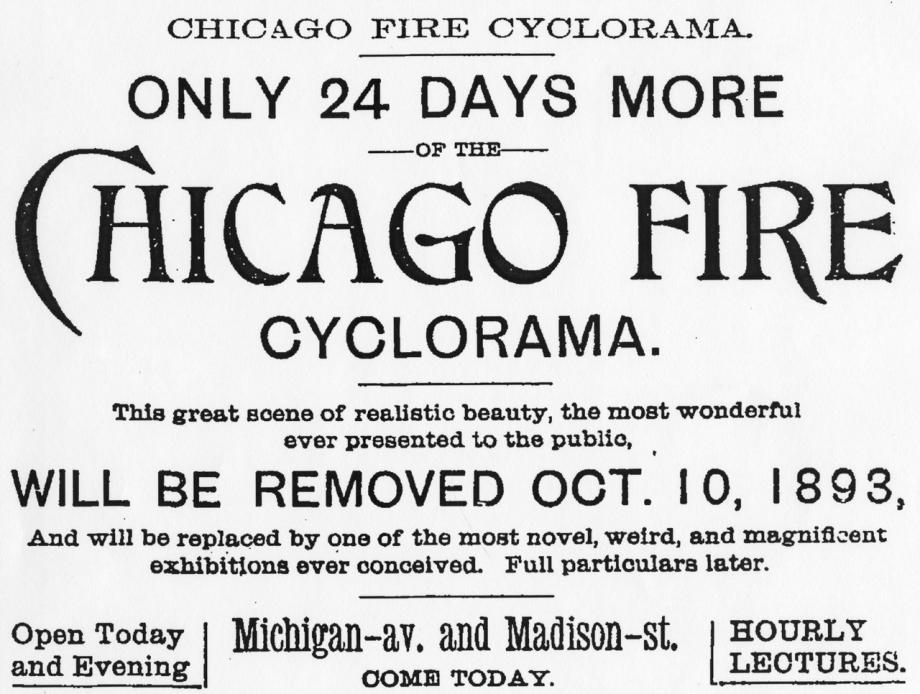 Some of the names of the companies that produced panoramas in Chicago were: 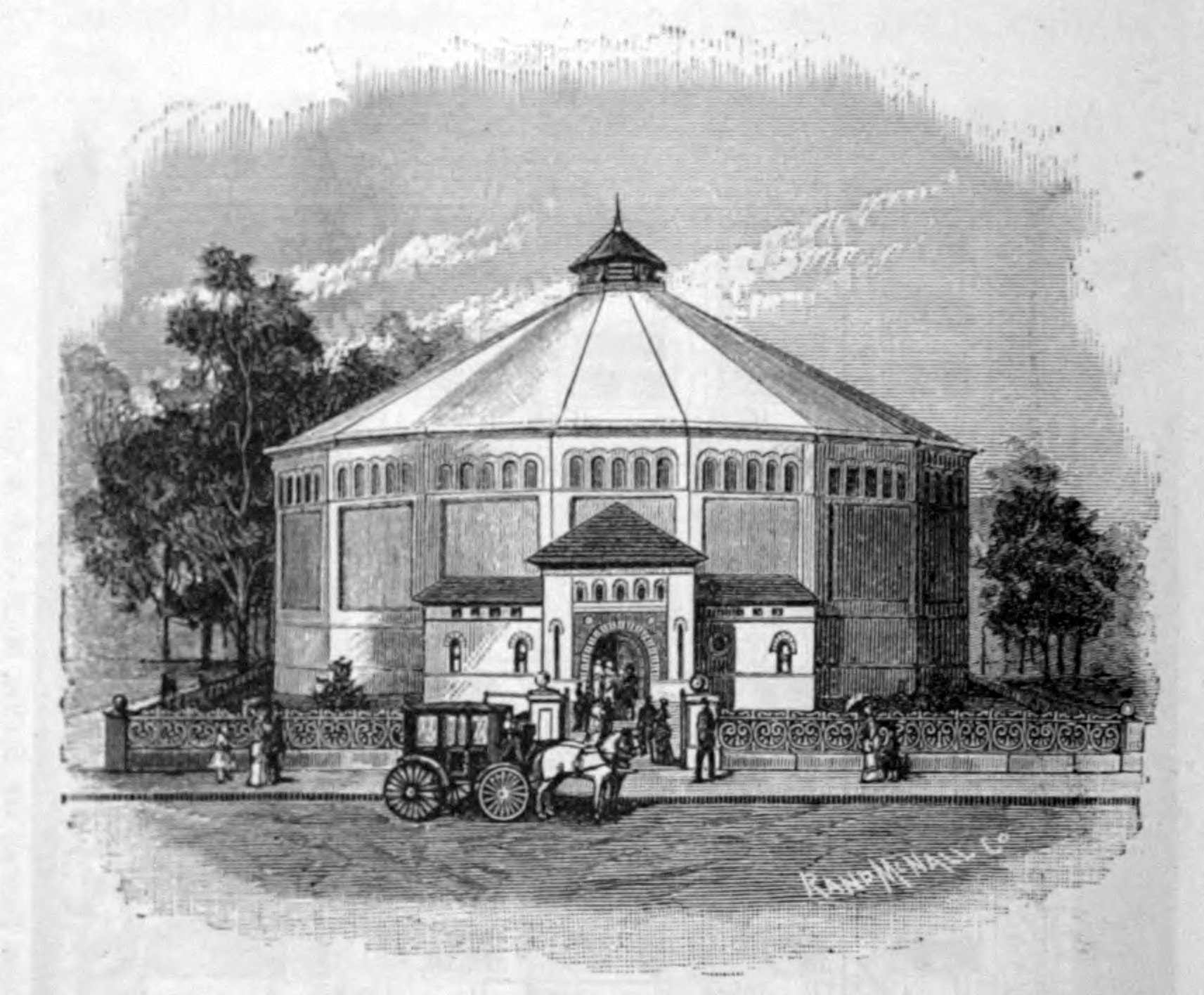 One of the most striking and beautiful buildings on Wabash avenue, is that built by the American Panorama Company for the exhibition of F. Philippoteaux’ last and greatest battlepiece of “The Siege of Paris; or, The Battle of Montretout.” It is located at the southeast corner of Wabash avenue and Hubbard Court. The height of the main building, which is circular, is over 80 feet, and the circumference is more than 400 feet. The entrance building in front is a model of architectural and beauty. Embowered in trees, with lawns in front and at the sides, this immense structure presents a striking appearance. itself corresponds in size to the ‘he building. It is recognized by artists and connoisseurs as one of the masterpieces of the century, and by the general public as one of the grandest productions of genius. It is open from 8.30 a. m. until 10.30 p. m., Sundays included. Chicago Tribune April 8, 1893

CYCLORAMA BUILDING IN RUINS.
Another Structure Near the Fair Gives Way to the Wind—Escapes.

Just after 12 o clock another flimsy affair surrendered to the force of only a wind, mal is now a mass of ruins. It was a frame -o of circular form, fifty- four feet high and 128 in ‘, erected for the purpose of exhibiting a panorama of tha Battle of Coattannoga. About engaged in I he constructed, but one of them bad just to din- tier, and thus escaped unharmed. A few who were in thle building also escaped.

In falling Dart of the north wall fell upon. a one-story next north, ;, part of the roof arid south wall, damaging it about $75. George Collins was the , and the building was worth about $1,200. It stood on the east side of Stony Island avenue a short distance south ot Pifty-seventh street.

Part of the front wall fell out into the street, breaking down sixty wires of the telephone and city fire alarm service. Men were at once sent for and the break in tne wires *as re- paired before dark. The broken great inconvenience to persons Eouth of there, cutting off all communication with the city.

Had the accident occurred fifteen sooner there would have been great loss of life, as many of the workmen were upon the roof of the dome-shaped structure, and would have met almost certain death. The building is a wreck, and mast of then material is broken and destroyed.

A southwest wind was blowing at the time and those of the workmen who were eating their dinners in that of the were suddenly startled by the cracking sounds which the walls gave forth under the s Pressure. They hastily abandoned their – tion and their meal in the northwest corner, when suddenly the section they had just deserted, fell in. Among their number was a man who sat on a pile of boards eating a box of . As the first side of the building fell his comrades dashed for the exit o n the northeast corner, but the intrepid workman said he guessed he was as safe wher3 he was as anywhere else and romaine> at his post inside te building. By a the two walls at the – of which he sat fel. outward and the workman walked forth from the d6bris unscathed.

B. F. CHASE HAS A FOR RE- PRODUCING WORLD S FAIR VIEWS,

Battery of Ten Stereopticonn Arranged In

a Circle to Project Connecting Pictures on a Spherical Segment-Careful Test to ale Made Next Week-Natural Colors to Be Shown-E.lectric and Mnoon Light Eifects Easily Made-Other Claims of the Inventor.

A cyclorama of the Court of Honor and other World’d Fair views will be on exhibition at the Chicago Fire Cycloranna building sev- eral clays next week. The of repro- ducing the Scenes is the invention of B. F. Chase. No. 6047 Yale avenue, aln in

photography. Mr. Chase says he can – duce any complete horizon view in nature s colors. The invention embraces the idea of a photographic cyclorama. using a battery of ten stereopticons to project on a blank circu- lar wall any picture or series of pictures In the 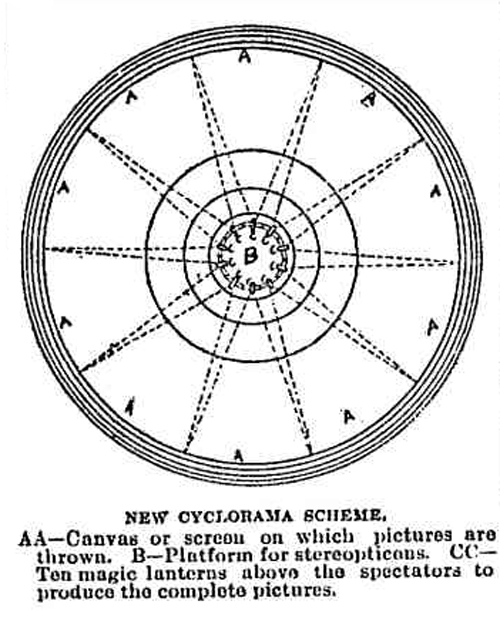 AA-Canvas or screen on which pictures are

nature of consecutive views. By the aid of the battery of stereopticons a connected can be made from films, and so ar- ranged that the spectator has the same scene spread before him in as if he stood in the position of the camera when the nega- tive was taken.

The exhibition next week will be in the nature of an experiment and test of the inven- tion. Although there been already several private demonstrations of the success of the scheme, the present trial, it is said, will be of such a nature as to determine whether or not the Dlan will be successful on a large scale. If the test Is as satisfactory as the inventor and his friends predict scheme may sup- plant thatof painting a panorama of the Fair. The views may be changed at will and Instantancously.

The invention is simple enough and the cost but nominal in & with that of in oils a picture several hundred feet in length such as are used in cycloramas. Thie principal item in the east would be the remodeling of an ordinary panorama build- ing. To secure the proper perspective and improve the foreground the walls of the in- terior of the building should be spherical in form like the interior of a . For cx- purposes a perpendicular wall will be used. It will be hung with white canvas and from above by black hangings. Tho operating room stands in the center, under which a platform is for the . The ten stereopticons are arranged in a circle about the operat- ing room and the lenses focused equally on the circular canvas-covered wall. By tho aid of an automatic electric apparatus the views may be made to change at regular intervals. Dissolving views may be . Electric light and moonlight effects are easily given and the reproduction made as lifelike as possible.

The present test or demonstration is on a much smaller scale thau tIhe for the perfected and elaborated plant Mr. chase expects to build. The exhibition will take Mondaly, Tuesday, Wednesday, aid Thursday. Invitations will be issued tc prominent -men land those interested i.. , views of thoe World’s Fair.