The project of the Odd-Fellows to build the highest and most costly office building. in Chicago—and that of course means in the world—seems to be well under way. Plans for a building as high as the Washington Monument have been prepared by Adler & Sullivan, and it was said yesterday that a suitable site had been secured. The plans provide for n rather peculiar-shaped building. The entire ground space is up to a height of fourteen stories. Above this the building extends six stories in the form of a square cross, the four spaces at the angles of the main building being left vacant. Above this main structure, which is twenty full stories in height, is a tower-shaped structure. This includes one-tenth of the whole area covered by the building, and is fourteen stories high. The entire structure is 330 feet in height, while the main portion is to be as high as the Masonic Temple. The building is severely plain and is suggestive of the Auditorium in its outside appearance.

There are two main arched entrances which open into a Mosaic floored rotunda. In the four corners of this rotunda will be located the banks of elevators. The construction will be similar to that of most of the high office buildings in the city with the exception that special arrangements will have to be made for a foundation for the central portion of the building. It is estimated that $3,500,000 will complete the building without allowing for the land on which it will stand.

The work of securing a site, a much more difficult feature of the undertaking than the work involved in making plans, is progressing. As may be inferred, the committee in charge of this part of the work is limited in its selection to a small number of eligible corners. An attempt was first made to secure a site on State street. This was given up and three or four sites further west have since been considered. The Honoré Block, Adams and Dearborn streets, lias been presented to the committee. The Bryan Block, extending from Monroe and La Salle streets to the alley just north, with the two properties adjoining on the west, is another possibility as a site.

The site which, it is said, will probably be selected is directly across the street from the Bryan Block. It will include the National Life Building, the Kent and Nixon Buildings, La Salle and Monroe street, and a number of frontages further east on the latter street. In short this site will include all of the south half of the block bounded by Clark. La Salle, Madison, and Monroe streets, except the Clark street frontage.

The National Life Building, just south of Arcade court is just one-half of the required property. This is owned by Higgins & Furber, who stand ready not only to make a satisfactory lease but to give the scheme financial support. The remainder of the property is held by seven parties, most of whom have given satisfactory options. It is known that favorable negotiations between Granville Dodge and local agents have been set aside on account of his understanding with the Odd-Fellows. This property, with a private alley vacated, will give a total frontage of 177 feet on La Salle street and 233 on Monroe street. 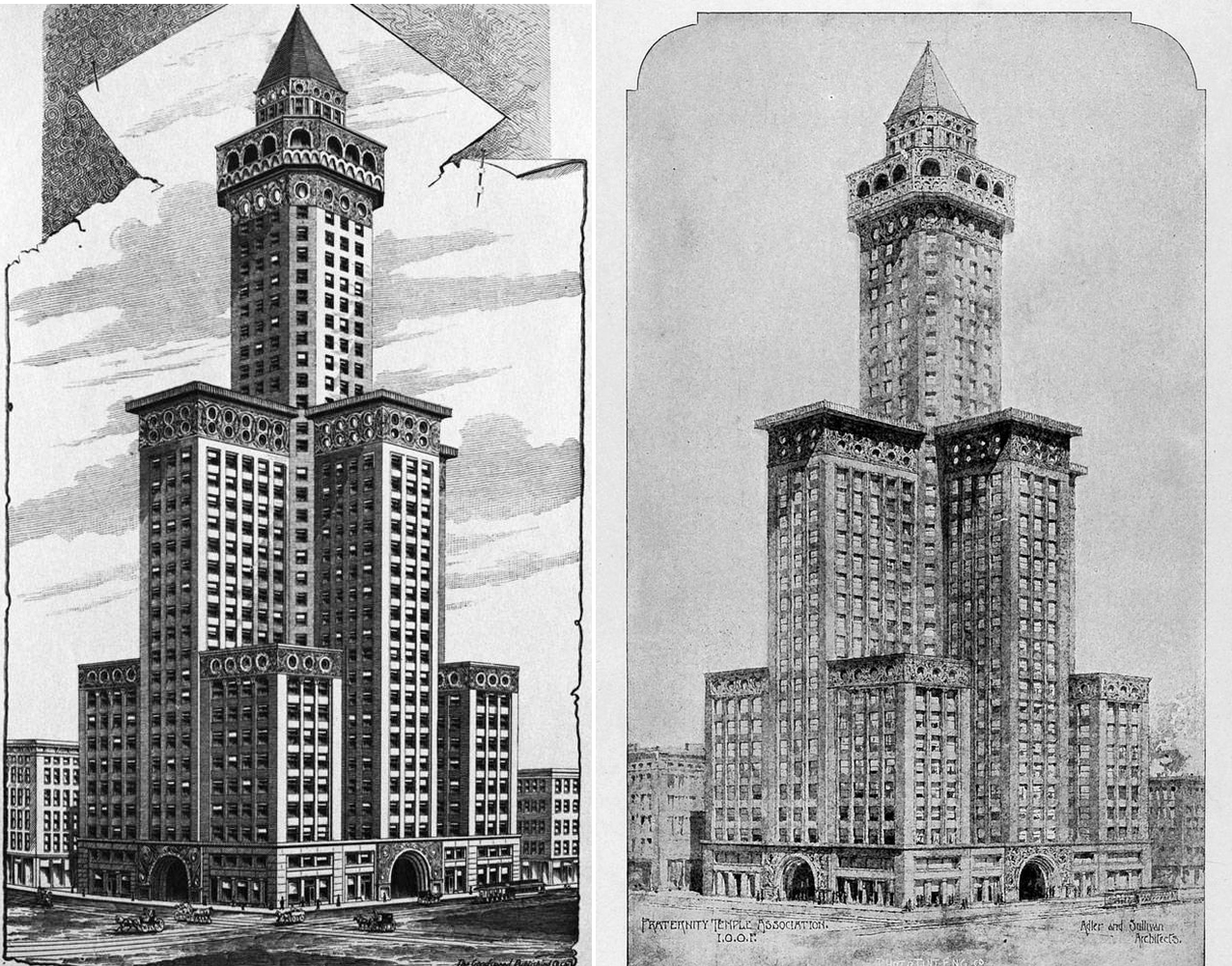 Some Estimates from the Prospectus Issued by the Building Committee.

The plans for the proposed Odd-Fellows’ Temple, a cut of which was given in Saturday’s TRIBUNE (above), have been prepared by Adler & Sullivan. They provide for an imposing structure. thirty-four stories or 556 feet high, to be located on one of the most prominent corners of the city. F. H. Cooney, E. B. Stone, and others have had the work of securing a site in charge and are said to have been in obtaining favorable options on at least two suitable sites.

The following from a prospectus issued by the Odd-Fellows’ Building Association will give an outline of the project:

The project which is herewith placed before the members of our order involves the purchase in the very heart of the business district of Chicago of a tract of ground containing nearly 43,000 square feet of surface, so situated with regard to streets and other open spaces that, by a comparatively area to the purposes of a court, we obtain a structure measuring 177×210 feet on the ground available for building purposes, with ample space for light and air on four sides.

In planning the proposed building it was soon found that there was no conflict between economic and esthetic considerations. Tho broad base, covering the entire lot to a height of thirty feet above the sidewalk, was called for by structural economic, ani artistic requirements and from these jointly have also been developed the groupings and divisions of the entire external treatment. The bold breaks and deep recesses of the long facades serve at once to admit external light and air to the interior of the building and to give an interesting diversity of outline and an effective play of light and shade to the long street fronts. The discontinuance of the terminal bays above the tenth story prevents thr casting of light-destroying shadows into tbe lower offices, and develops the second element of the progressive recessions from base to pinnacle, which constitute an important feature of the design. Structurally these terminal features serve as buttresses for the long arms of the cross. which is the typical characteristic of the plan, and from the couter of which, buttressed in every direction, rises the tower which is the culminating feature of the structure.

Tho tower will serve as a landmark for the country within a radius of sixty miles around Chicago, and will be visible from Michigan City, La Porte, Aurora, Elgin, Waukegan, and intermediate points. This tower, while of thoe utmost artistic and symbolic significance in the design. will possess a marked economic value. It will contain 132 offices above the roof of tho building, and from its location becomes the center of approach and communication for the entire building. Within it will be eighteen elevators and four main staircases. And as these become less in number hii the higher parts of the building their places will be taken by offices, so that there will be in addition to the 132 ofIces in the upper or free standing part of the tower also 60 corner offices In the intermediate parts of the same.

It is Intended that twenty-four lodge rooms and public halls of various dimensions shall occupy the third, fourth, fifth, sixth, and tenth stories, the great drill hall occupying the whole of one end of the tenth story and measuring 8,000 square feet in aroa. The remainder of the building will be available for business purposes. The entire number of rooms available for rental, exclusive of the halls and lodge-rooms, will be 1,110 and their aggregate area will be over 250,000 square foet, while including lodge-rooms and public-halls the area inclosed (exclusive of walls, partitions, corridors. etc.) will be 350,000 square feet.

Estimates of rental and deduction for operating expenses have been made, based upon the experience of other first-class business buildings in this city, without making allowance for the unusual and almost phenomenal additional value which will accrue to business premises self-advertising as these, and containing within their wails a business population equal to that of cities of over 100,000 inhabitants. The net income shown by these figures is $675,000 per annum. This sum will be sufficient to allow, in addition to the sources of income in tower observatory and basement story, ignored in making up the foregoing figures, a margin for possible loss of rentals, as also to pay interest on $3,000.000 in bonds and to contribute toward a sinking fund for redemption of bonds $100,000 each year. After all these allowances and deductions there will be left applicable to dividends upon stock the enormous sum of $375,000 per annum.

The concentrations of immense loads incident to the construction of this building render necessary unusual precautions in the constructon of thn foundations, and consultations had by our architects. Messrs. Adler and Sullivan, with eminent engineers, among them Gen. William Sooy Smith, have resulted in the design of a system of foundation construction which will without excessive cost carry the weight of the building down to the underlying bed rock, and therefore far below any disturbing influences that may occur in consequence of the construction of subways. etc. The design of the superstructure involves the use of riveted steel pillars and steel girders immovably knit together at all joints. vertical as well as horizontal, by steel or iron rivets, and a system of diagonal wind-braces of steel, so thorough and far-reaching and all-pervading that, reinforced by the masses of masonry tho pillars in the lower parts of tbe structure, there vill be attained that combination of masonry and skeleton construction required for successful resistance to the wind strains to which so high a building will necessarily be exposed.