. . . . . In a conspicuous position near the north end of the Horticultural Building, stands a dainty little structure (50×100 feet) which is sacred to the printing-press. It was designed by Stanford White for Puck, and it forms a delicate and beautiful note of color in the landscape. It is Italian Renaissance, and the square building, with its small oval windows, has a circular, porch-like entrance, painted red within and out lined with twisted columns. Below the railing which surrounds the roof, the walls are decorated with white garlands and Cupids modelled in relief. The familiar figure of Puck himself stands hospitably over the porch, welcoming the throngs of people who pass between the curving pillars to pay him homage. The building is painted buff, the decorations being in white, and this delicate bit of color in the White City is grateful to the eye. Within the portals the World’s Fair Puck, a periodical slightly smaller than the New York edition and entirely different in matter, is written, illustrated, edited, and printed under the eyes of the public. It is a miniature publishing house, complete in every detail and offering facilities for the study of processes unsurpassed in any other part of the Exposition. The interest in the building is so great that a regular line of march has been arranged so that the crowd moves constantly in one direction. The central portion of the main floor is occupied by the presses, of which there are seven, acting, apparently, with almost human intelligence. The process of printing colors from the stone is novel to most of the people who watch and the gradual transformation of the lithograph from black-and-white through the various colors, added one time, different presses, the completed picture, extremely interesting. As one passes along the two galleries above these presses, on one’s right are many small rooms which the paper prepared for publication. this way the visitor has the privilege watching the stone-grinding, the cutting overlays, engraving on metal, wood and stone, the drawing with pen and ink on paper and with the brush on stone, mortising and proving, type-setting, the make-up department, the transfer press, and the system chromo-lithography. The corners of the second gallery are occupied by the editorial and art departments, which are the only ones curtained from the public gaze. On the walls are many water-colors and pen-drawings by Keppler, Rogers, Opper and others of the Puck. staff. The cutting, folding and stitching the paper are done on the main floor, and interesting to watch the rapidity the various machines and the dexterity the manipulators. pretty little reception-room with dainty furnishings near the entrance, and throughout the interior the decorations are as felicitous as those on the outside the attractive little building.—The Critic. 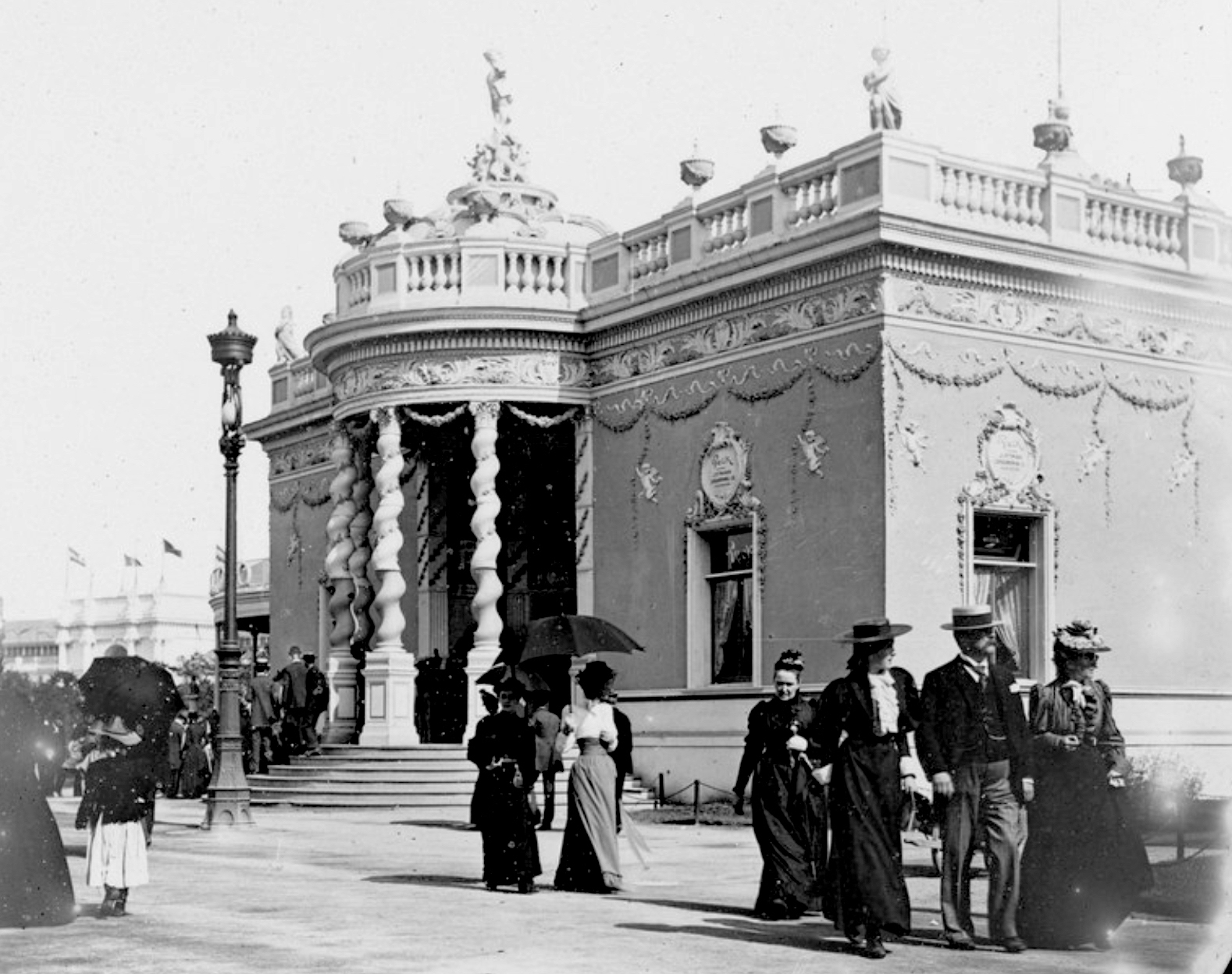 Properly belonging in this department (Liberal Arts) is the exhibit contained in the “Puck” Building, the beautiful little pavilion which is located just north of the Horticultural Building. This well-known comic paper has constructed a dainty edifice where all the friends of the publication are made welcome. It is elaborately decorated with sculpture and ornamental designs. An artistic group in bronze crowns the portico. It was designed by Henry Baerer, the celebrated sculptor, and represents Puck standing on an eminence from which he commands a view of the world. In one hand he holds a mirror, and in the other a crayon. Within the building the publishers of the magazine show all the processes of illustration and color lithography from beginning to end, and the presses are constantly employed in printing a World’s Fair edition of the publication. 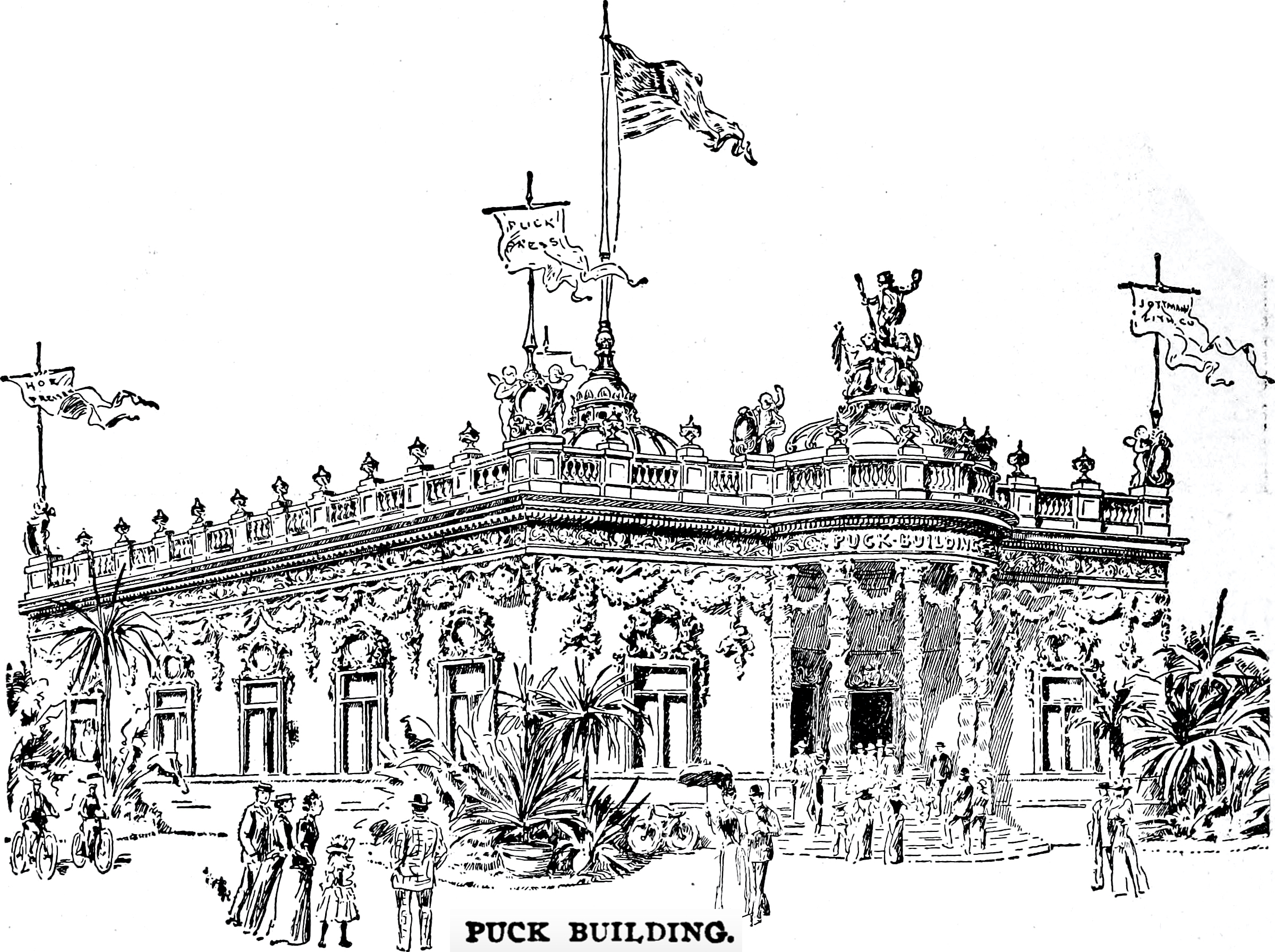 The entire color printing process of The World’s Fair Puck can be witnessed here using six Hoe presses and artists’ and engravers’ rooms.

East of the Children’s Building is Puck’s Building. Puck presses are turning out Pucks and the various processes which are gone through, designing the illustrations, engraving and preparing the stones, printing in colors, and every feature connected with the making of that particular publication is gone through with, and the visitor galleries up stairs and downstairs sees the works at each particular period and the exhibit is considered one of the most interesting on the grounds. 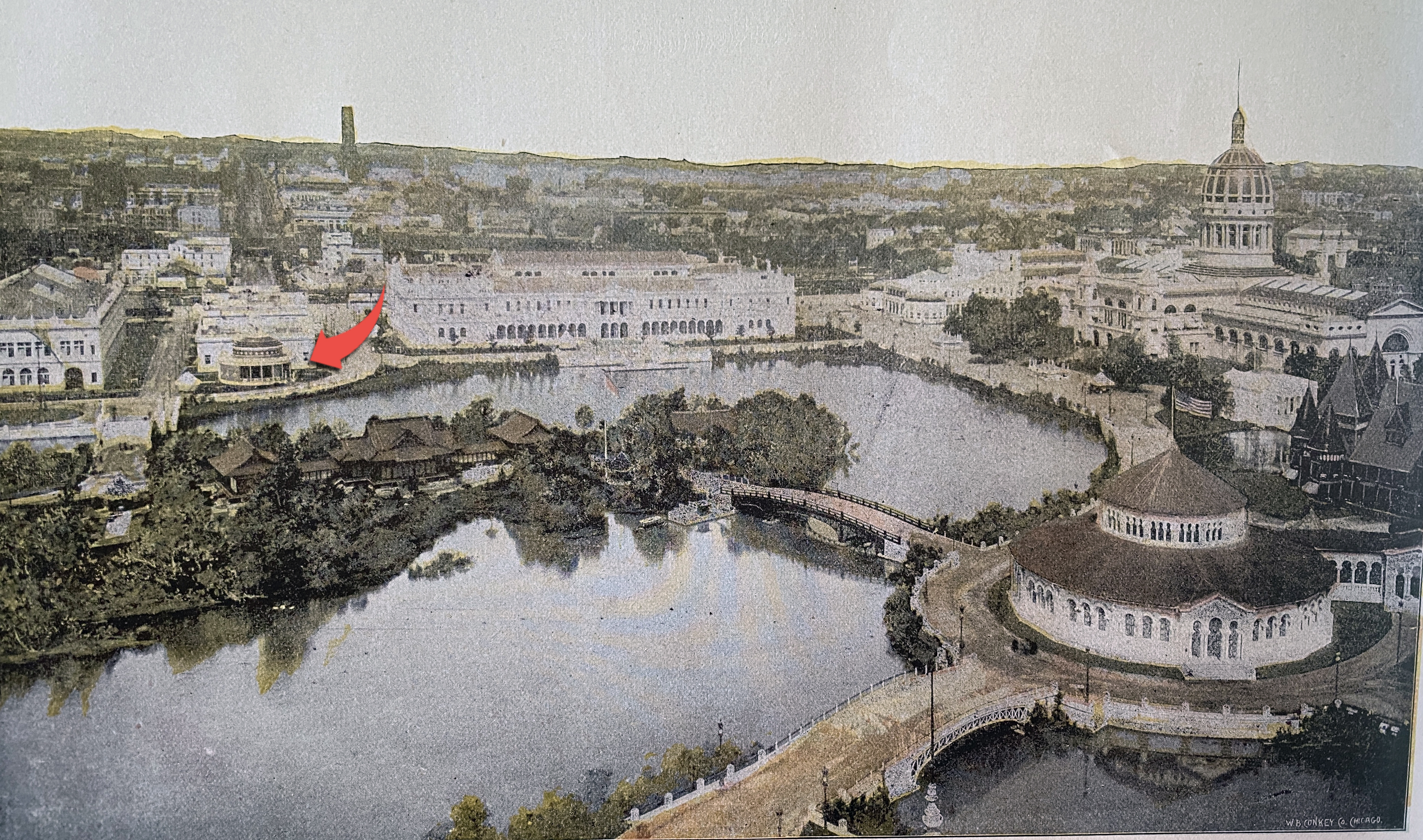 A VIEW TOWARD THE NORTHWEST.—From the roof of the Government Building, the location of the Puck Building.

The Puck Building has been sold to a wrecker for $200, but its smaller neighbor, the White Star Line Building gets no offers. 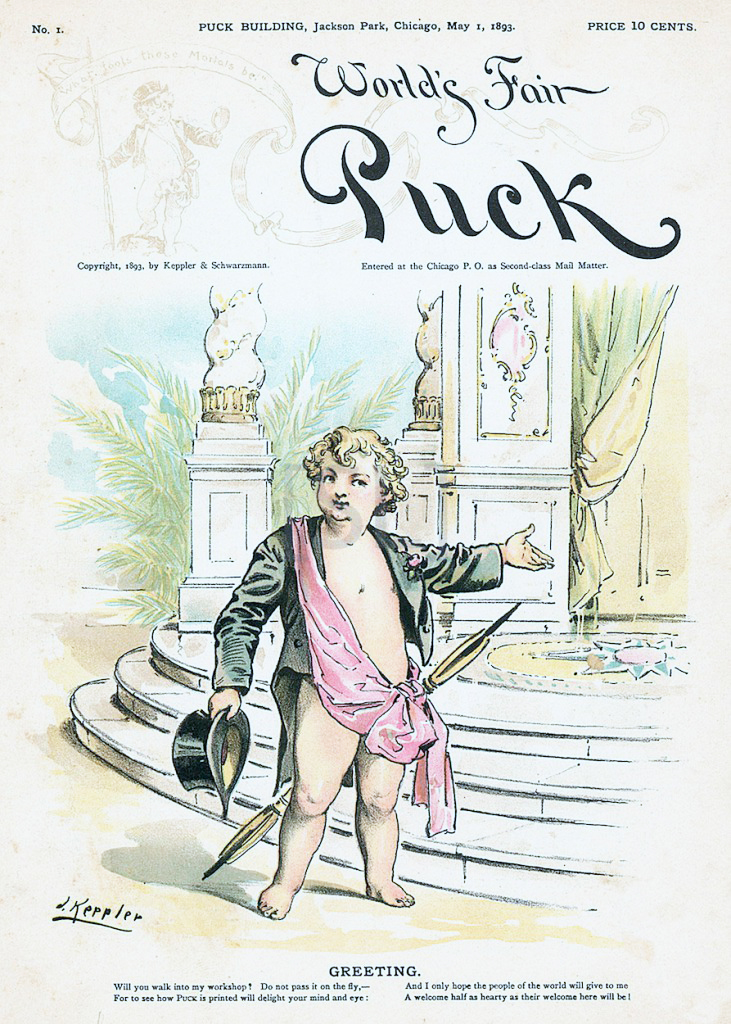 For a period of six months in 1893, Joseph Keppler and his partner, Adolph Schwarzmann temporarily moved the entire operation to Chicago, inside the grounds of the 1893 World’s Columbian Exposition. The Chicago World’s Fair Puck—twenty-six issues published from May to October 1893—was more portable and compact; each issue contained 12 pages. Every week, Puck commented on an assortment of goings-on at popular fair locations, including the Street in Cairo, Buffalo Bill’s Wild West Show, the Ferris wheel, and the Puck’s operations were in a building fortuitously situated in between the Women’s Building and the Children’s Exhibit, and near the entrance to the Midway Plaisance. It is thus no surprise that a majority of the twenty-six issues, including the double-page spreads and the advertisements, directly addressed the female visitor and reader by including a variety of stories, anecdotes, cartoons, and representations of women at the Fair.

In particular, Puck often depicted the authoritative and majestic figure of Columbia, the poetic embodiment for the United States of America as well as the namesake of the Fair itself. Puck also rendered the city of Chicago in feminine terms, as a fashionable lady and source of inspiration and reverence. For example, in the very first issue dated May 1st, 1893, in the center double-page spread, Chicago is seen as a high society hostess dressed in red who is to be feted and regaled at a social function in honor of the Fair’s opening. Men toast her, the belle of the ball, and by association the city of Chicago for this great and profitable event. In another center double-page spread from the June 12th, 1893 issue, Chicago is dressed in white and red while standing between the entrance to the Fair grounds and the city of Chicago as a beacon welcoming the city’s laborers and immigrants to the Fair. In a later issue from July 10, 1893, the center double-page spread depicts a more brazen Lady Chicago holding a US flag, and who coincidentally resembles the patriotic Columbia in costume; this Lady Chicago greets and celebrates the military men in the foreground who are visiting the Fair.

This gendered representation of Chicago and Columbia was not new to the visitors of the 1893 Chicago World Fair. Harriet Monroe’s commemorative “Columbian Ode” wherein the fair city of Chicago is greeted by Columbia, was performed at the Fair’s dedication ceremonies in October 1892. In fact, the souvenir edition of Monroe’s “Ode” was designed by William H. Bradley and depicts a feminine Columbia. Puck and its vibrant images must be understood as part of a Gilded Age tradition of graphic satire and a visual document of the era of modernity—and women—on the rise.

However, Keppler was overambitious with his Puck presentation at the 1893 World’s Fair in Chicago and decided to publish the magazine on site at the fairgrounds. The Puck publishing building at the fair had poor air circulation, making for uncomfortably warm working conditions during the Chicago summer and the writers and artists were constantly at odds under the stress. The issues that arose during the Fair showed the strain and conflict growing within the magazine’s staff, and the its leadership steadily began to fall apart as the year drew to a close. Keppler died in 1894; although the magazine lasted until 1918, it never regained its large readership or the influence it held under Keppler.—Nhora Lucía Serrano, Hamilton College 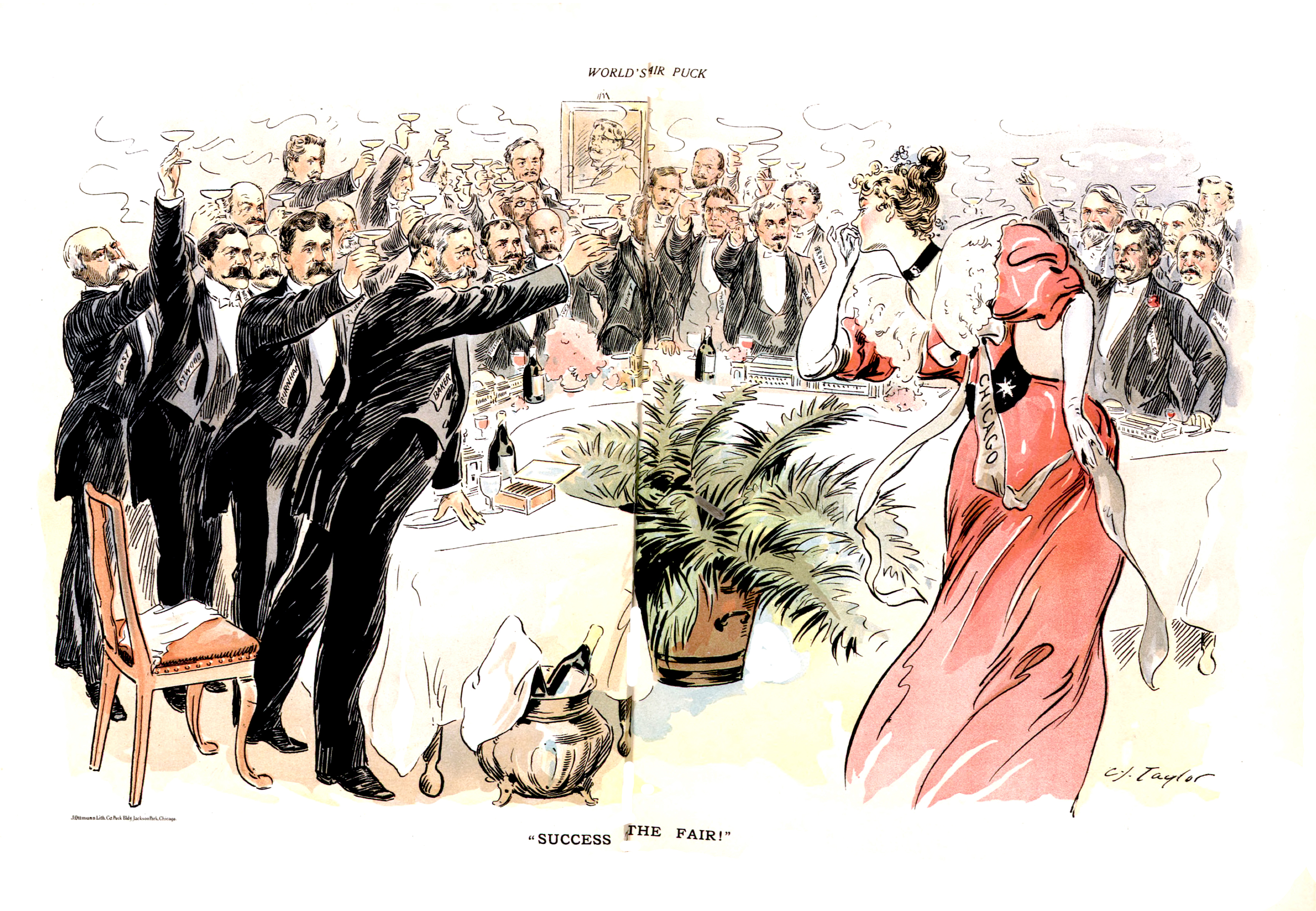 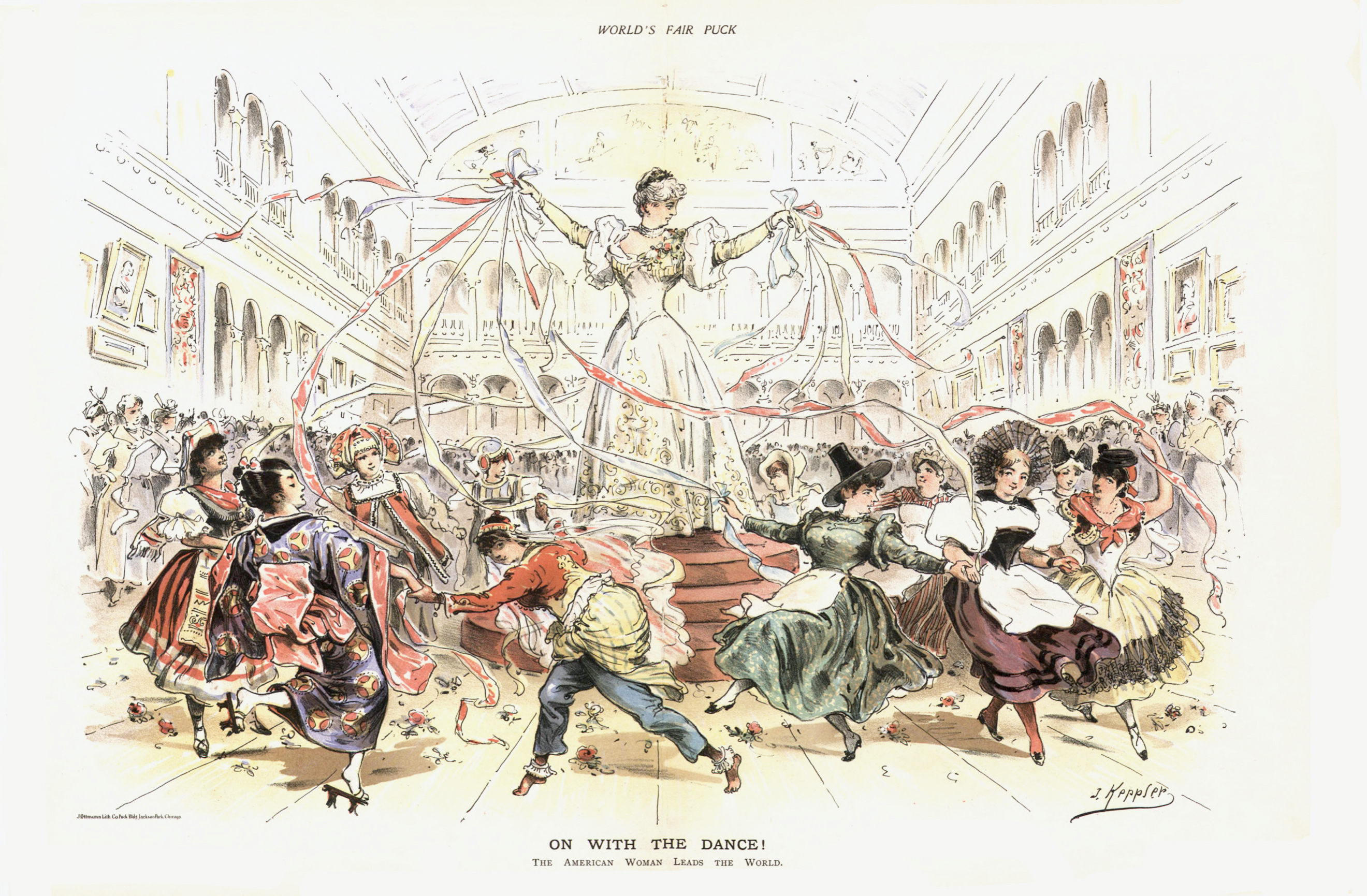 World’s Fair Puck
May 29, 1893
The American Woman Leads the World 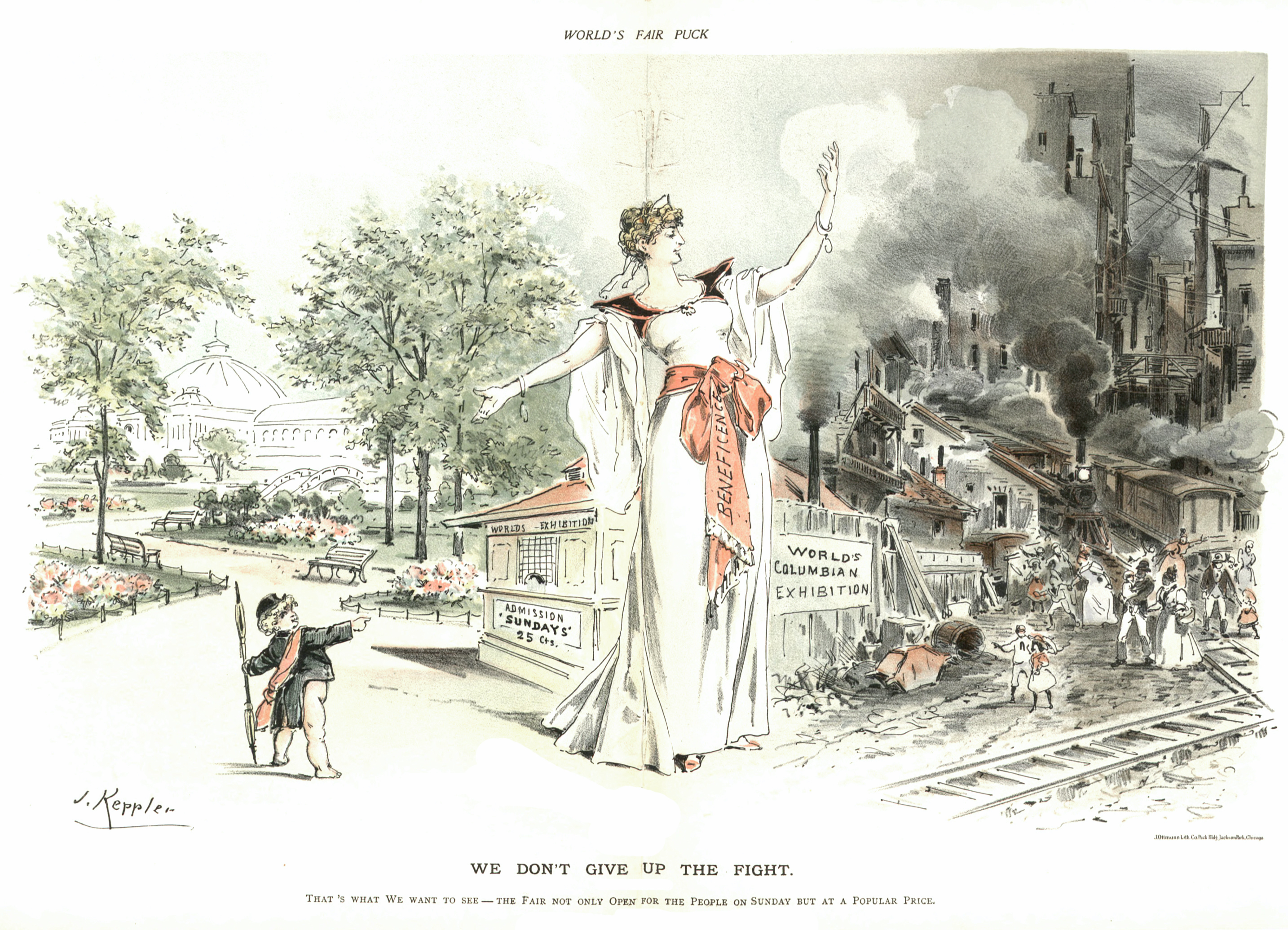 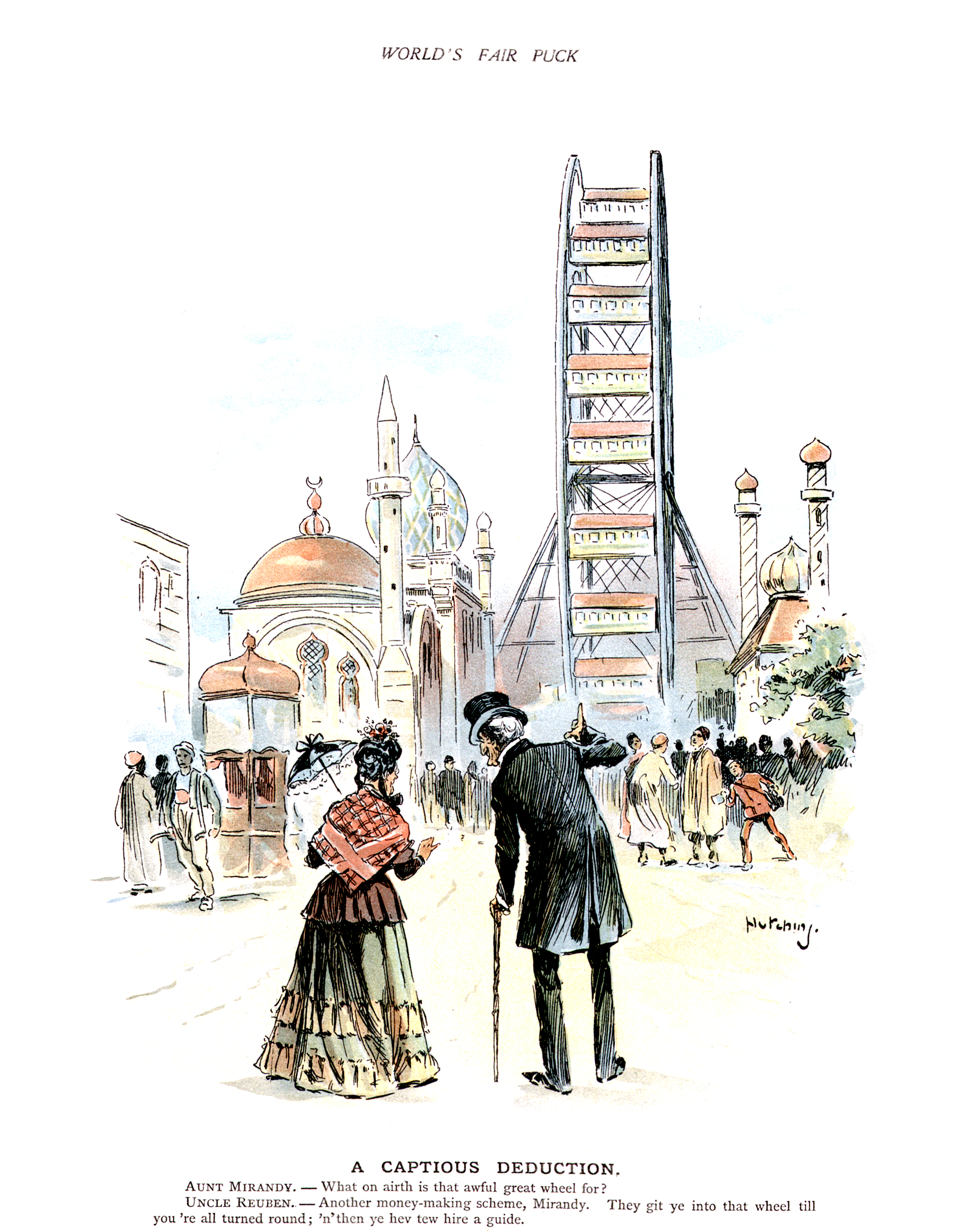 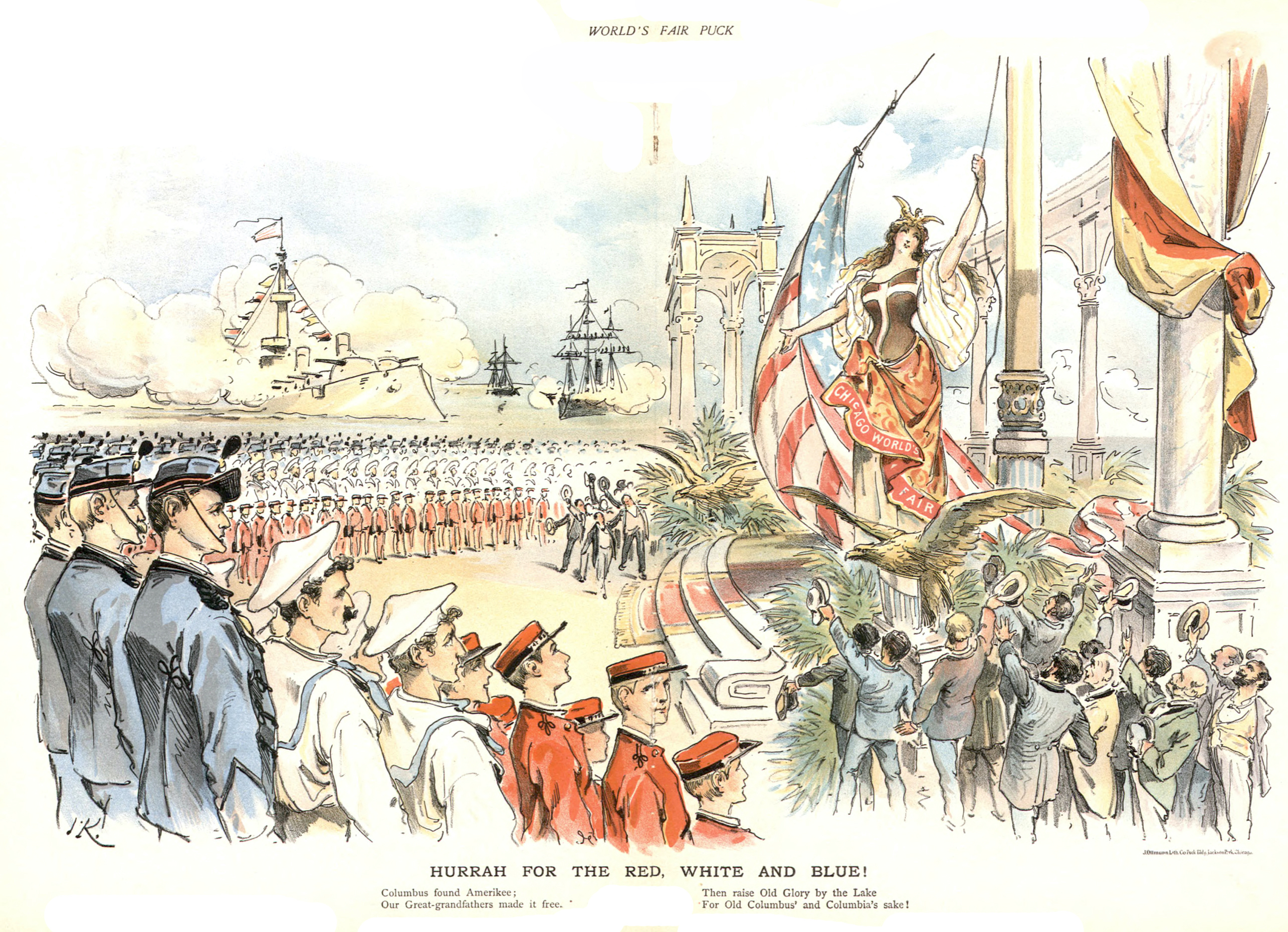 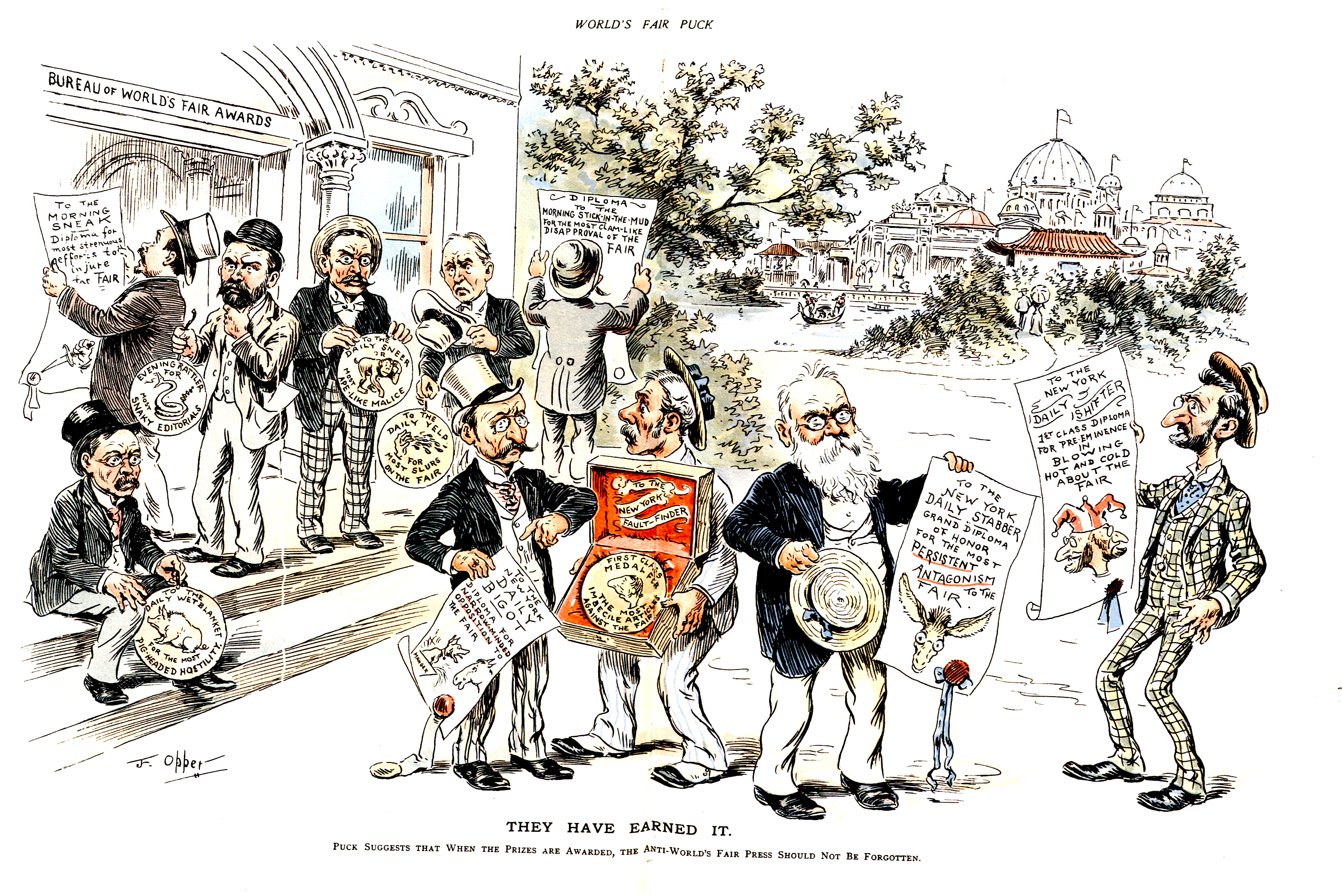 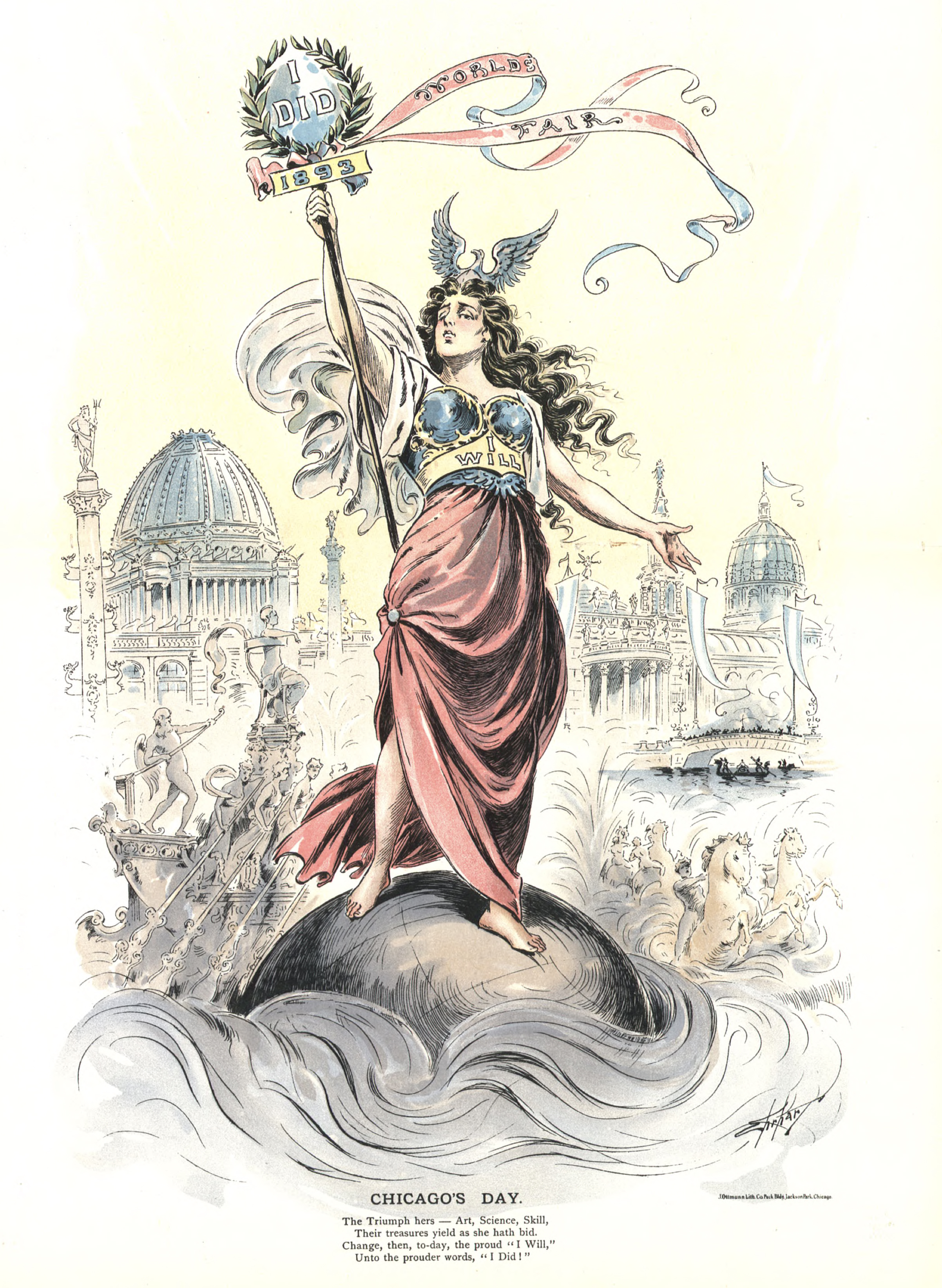 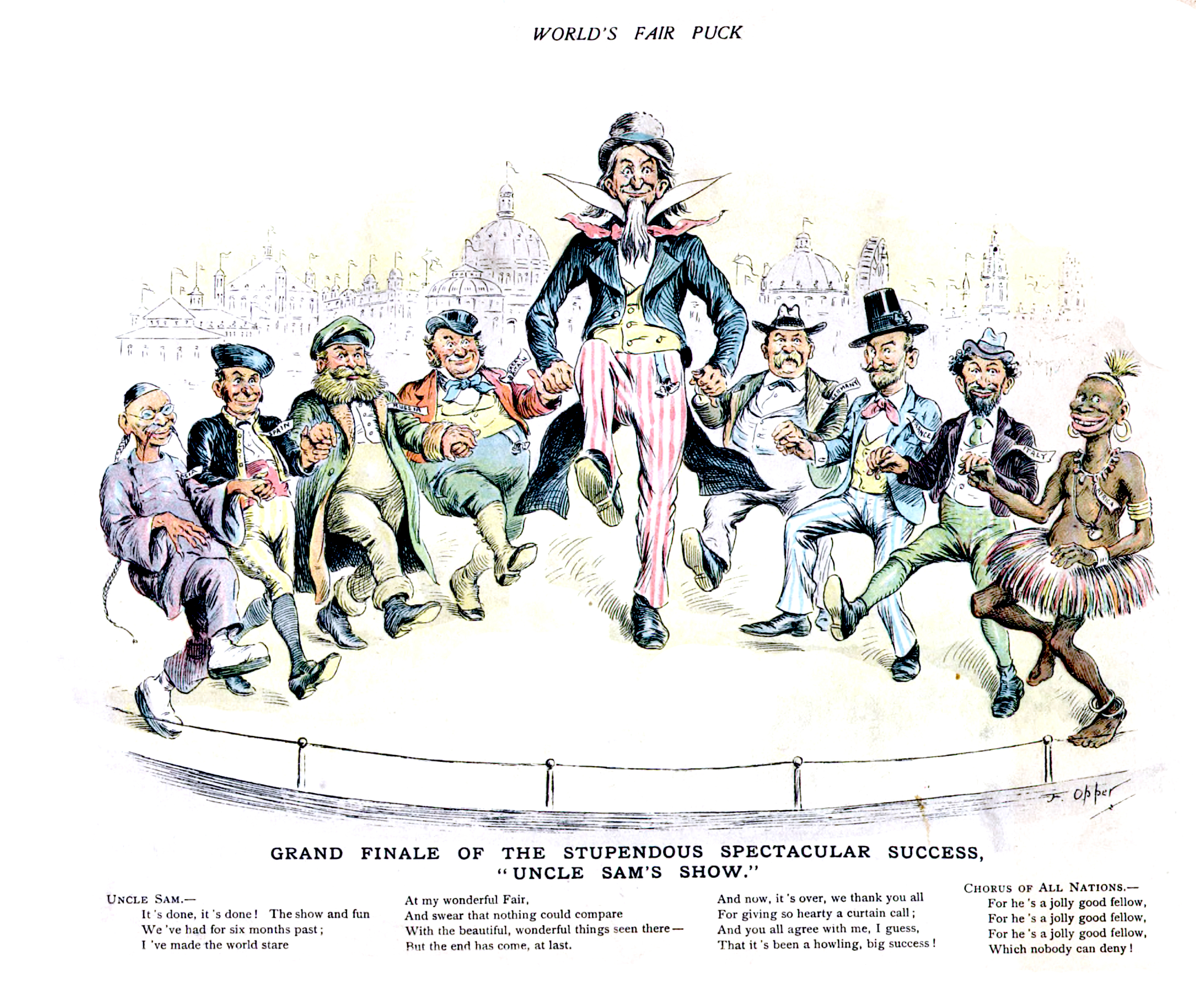 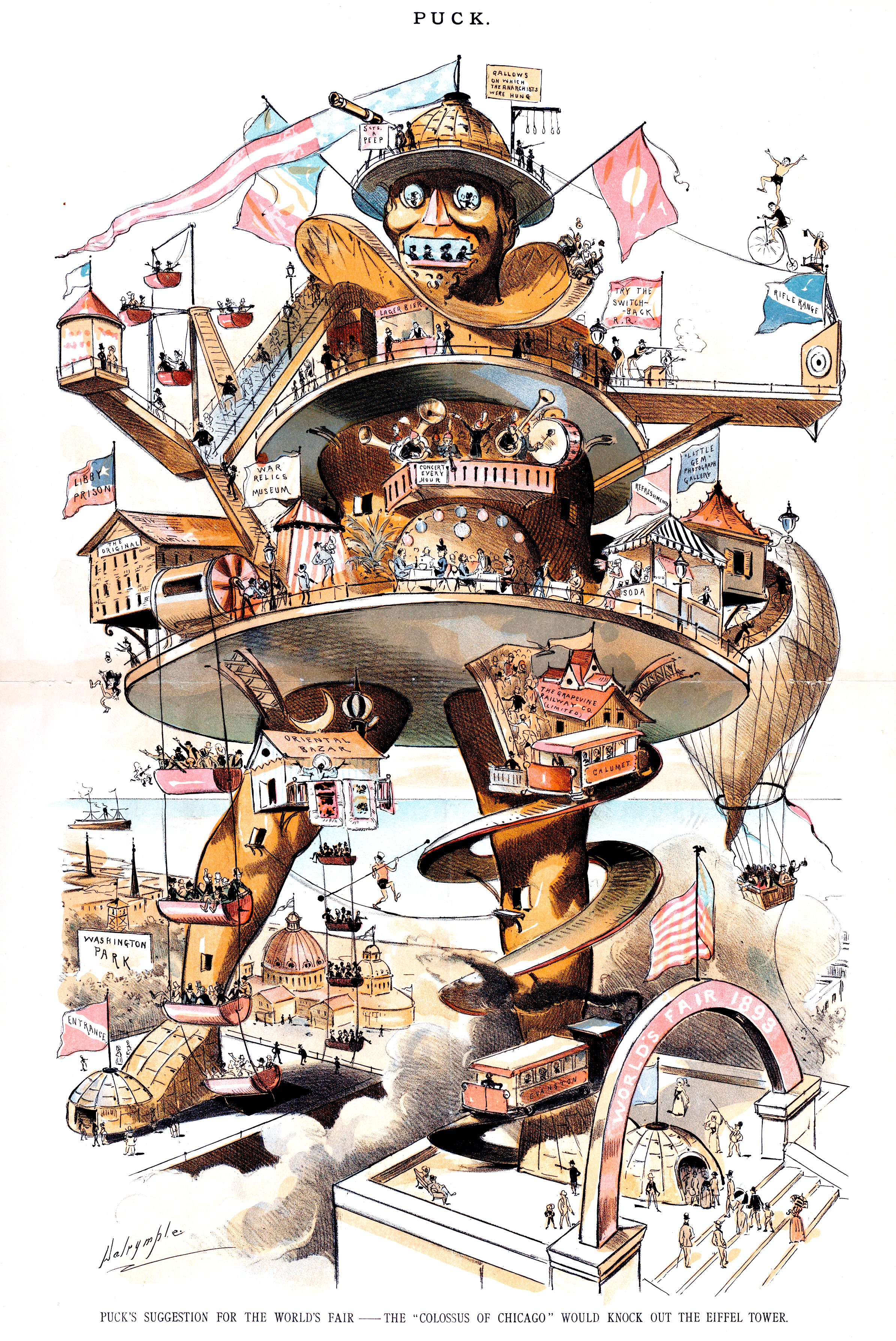 Puck’s Suggestion for the World’s Fair—The “Colossus of Chicago” would knock out the Eiffel Tower.
Puck
October 8, 1890