A mere enumeration of the more prominent groups and special apparatus contained in the annex is a sufficient excuse for omitting descriptive detail, and it is almost unnecessary to say more than the foremost of American manufactures have placed their choicest specimens on exposition. Among the more noticeable exhibits is that of the McCormick Harvesting Machine company of Chicago, who are the largest manufactures of their kind in the world. Their exhibits consist of harvesters, binders, mowers, and reapers, the first including rice and corn harvesters, and all of them extensively used, not only in the United States, but in foreign lands, wherever grains and grasses will grow. In the patent office exhibit of the Government department, there is a series of models, showing the processes of development in the McCormick machine, and forming with others, a complete illustration of the progress and preeminence of the United States in the manufacture of agricultural machinery. Side by side with the perfected mechanisms of the present day is the model of the first practical reaper invented by Cyrus H. McCormick in 1831, and in the summer of that year, worked with excellent results in a field of oats at Walnut Grove, Virginia. He was then only twenty-one years of age, but inheriting from his father, Robert McCormick, a taste and gift for invention, took up his work on the reaper after observing the failure of previous attempts made by the latter. Hence his name was deemed worthy of a place among those of the great inventors and discoverers inscribed on the frieze of Machinery hall, for in his original reaper were embodied the fundamental principles on which all reapers and harvesters have since been made. An interesting feature is the panoramic illustration of the growth of the company’s business. 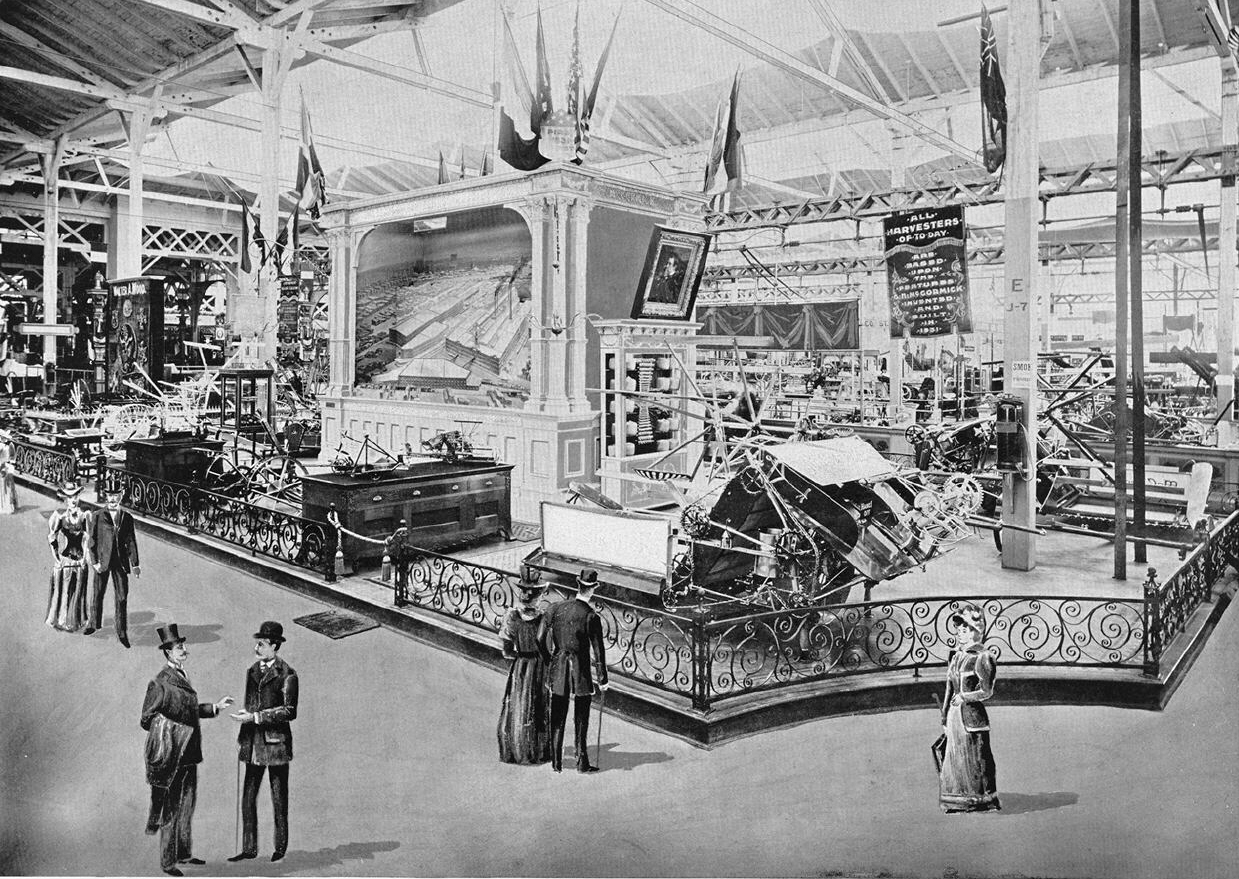 The story is depicted upon opposite sides of a screen, one showing the old-fashioned blacksmith shop in Virginia, where Cyrus H. McCormick forged the iron work for his first reaping machine, and the other the Chicago works as they appeared in 1893, with their forty acres of factories, warehouses, and yards, with trains running to and fro, and vessels [386] loading and unloading at the docks. Here also are the medals and other recognitions, awarded at former international expositions, beginning with the gold medal of the American institute, bestowed in 1845, and including those which were granted at the London Expositions of 1851 and 1862, the Paris Fairs of 1855, 1867, 1878, and 1889, and the Philadelphia Exposition of 1876. Especially were the merits of the McCormick reaper recognized at the London Exhibition of 1851, though still a novelty to British manufactures and agriculturists. Even the London Times, which had before described it as “a cross between an Astley chariot, a wheel-barrow, and one that of itself would almost repay its entire cost. Said the commissioner of patents in his report for 1849; “In agriculture it is, in my view, as important a labor saving device as the spinning-jenney and power loom in manufactures. It is one of those great and valuable inventions which commence a new era in the progress of improvement, and whose beneficial influence is felt in all coming time.”