On each side of the MacMonnies Fountain, which was the principal decoration of the Fair, was placed a circular basin or inclosure, as seen in the photograph, from which many volcano-like craters issued. These were covered with rustic rock-work for ornament in the day-time, when the fountains were not in use. At night, there issued from these craters streams of water lava – green, golden, rosy red, pink, yellow and blue – the columns rising to a much greater height than may be here seen, capable also of multiple colors, cross-playing, and pyramidal effects. The vari-colored night fountain, in former times, was produced only on the dramatic stage, the colored lights being thrown upon the waters from the flies and by the Drummond light.

The electric fountain was introduced to the general public at Paris, in the Exposition of 1889, with great success. Mr. Yerkes, of Chicago, then erected a fine example of this beautiful device at Lincoln Park, in the northern part of the city of Chicago, which, playing on three nights a week, was visited by millions of people. These fountains at the Fair, at the hours in which they were played, added distinctly to the bewildering beauties of the scene. The operators are concealed in a spacious room beneath the basin, and electric lights play on the water before it rises out of the funnels. Owing to the complexity of the apparatus – hydraulics, dynamos, and what not – disappointment is frequent and unavoidable, but the successful exhibitions are all the more highly enjoyed by the people.

THE ELECTRIC FOUNTAINS.—The Electric Fountains, one on each side of the famous Macmonnies Fountain, at the west end of the Court of Honor, added greatly to the beauty of the night scene, and always when playing attracted thousands to their vicinity. When quiescent, all that could be seen of the fountains was the multitude of pipes arranged within the rocky basin. At night, however, there came a sudden activity, and from the pipes leaped high in the air great streams of water glittering with the hues of the rainbow and falling back in a cataract to the basin where the turbulent mass of color bubbled and tossed and overflowed with dazzling effect. The fountains exceeded in magnitude and beauty anything of the sort ever constructed, the basins being sixty feet in diameter and pierced for three hundred and four jets, the water from which ascended to a height of one hundred and fifty feet. The brilliant effects were produced by concealed lights, the charm of mystery being thus added to the illusion. The entire apparatus was controlled by electric signals from the dome of Machinery Hall, where the different lights were applied and the transmission from one to another controlled at will. The illumination was by thirty-eight arc lights of one hundred amperes, each requiring nearly one thousand horse-power in operation. The jets were arranged in circles and the effect was the climax of success for this beautiful modern device. 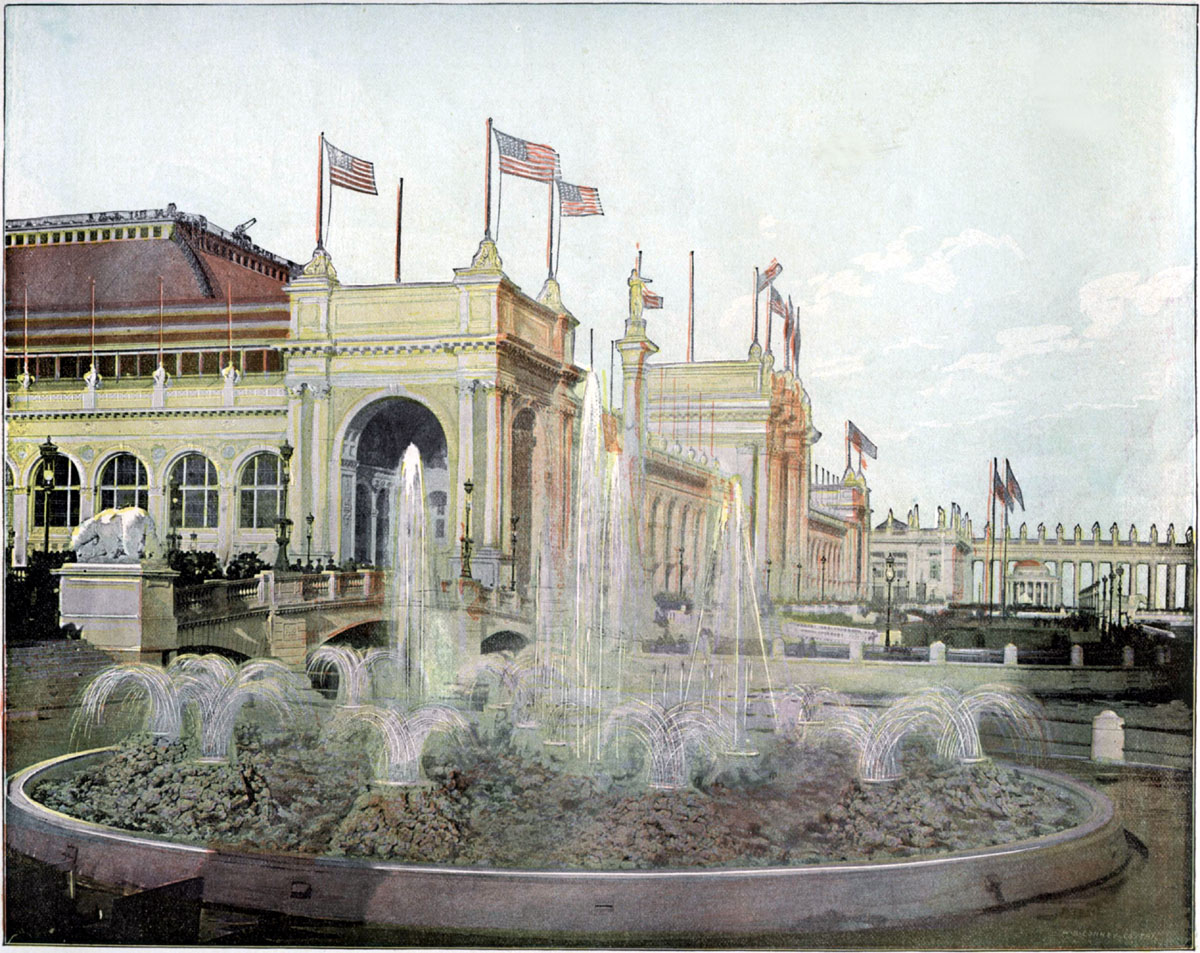 The following article was published in Harper’s Weekly on 3 October 1891:

People have been known to travel miles to see the electric fountain in Lincoln Park, Chicago. It is worth travelling miles to see if one be of the sort that can be entertained by the play of infinite combinations of colors in flowing water rising into the air to a height of say 100 feet or more. Every Tuesday and Friday night from 20,000 to 30,000 spectators gather to see the brilliant show.

Wherever the fountain plays, it plays at night. Of course it plays at night. In the daytime, under the pitiless revelation of the bright sun, the fountain looks like a Christmas dinner table after the fnmily has left it, or like the old morning stage of a tank drama. It is nothing but a large pool of more or Jess muddy water, out of which arises a circular wall of brown granite. Very prosaic indeed. But at night-when you see the fountain at night in the witchery of the darkness-no wonder-work of Hermes the Thrice Great, no illusion of Robert of Flood, no design of Apollonius or marvel of Johannes Philostratus, was more singularly beautiful, more laden with the raiment and color of the magical, more deft iu touches of transition, in changes changing from one bewildering aspect to another, infinite in number, fascinating, full of surprise. 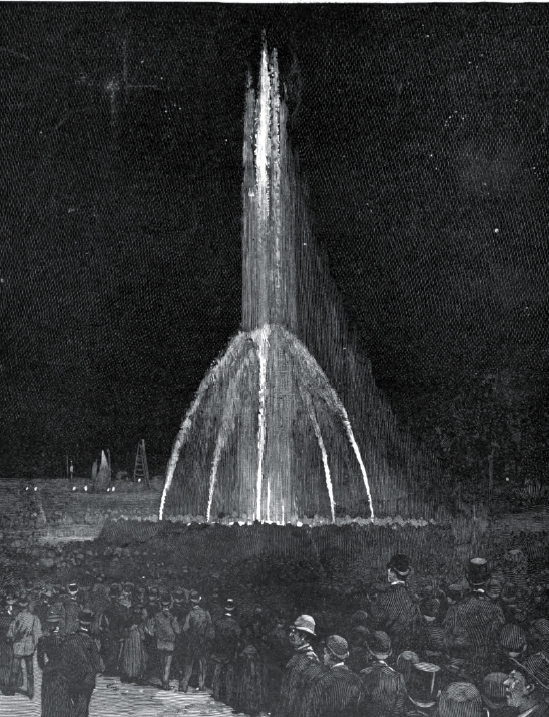 This is what the thousands see in the fountain at night. Higher, higher, as if it were aiming at an aspirational ways just beyond its reach, but still possible of Ilttainment, leaps the central stream, big of endeavor for climax, and never wearied of its failures, flashing from its lateral spray a million points and prisms of light, and piercing on and upwards with noble effort until its force is spent; then breaking over the topmost point, and tumbling and tossing down upon itself, flinging the old and passed water in the faces of the subordinllte jets that follow it meekly, corning anew eternally with new supply, only to mount and flash and fail and fall again. As it leaps up from its unseen source in tbe pool, and stretcbes itself longingly towards the stars, it Illay be said to resemble some ancieut snake deity in some an cient temple ill the old Orient, showing its lithe and lovely form covered with beautiful flames and flakes, fit for worship, and symbolizing the purpose of man in tbe universe-” upward endeavor, ampler existence.” A little thing as measured lly tho standineffable, unspeakable sentiment. ‘

Across this central bit of color, of Nght and shadow, in the main picture, are flung the eight subordinate streams, equidistant from the centre at the base, and between these are several hundred miuol’ jets, each a little rainbow in itself, adding to the incomparable coloring of the greater streams their own bedazzling splendor. By a clever arrangement of refiectors and colored cover glasses, to be described below, every stream-central, subordinate, and minor-is turned into a living, leaping rod of color. The light falls on every drop, every spray, every atom of water that is thrown out of the Jets, and the towl result is an ever-shifting and surprising rise and fall of a clear liquid column about one hundred feet high and about fifteen feet in diameter.

The height to which the central stream is thrown (and this is true of all the streams) is controlled by a system of valves in the great square cellar or room, directly under the bed of the large pool surrounding the exterior wall of thc fountain. From tbe roof of this room rise fifteen cylinders of brick wall, iuclined (except the central one) at an angle leaning toward the centre. These cylinders resemble the veutilators of a steamship if you remove the arched neck. Their tops fire nearly level with the top of the circular wall, and out of their mouths project the nozzles of the water-pipes. They are closed at the mouth with round plates of glass, designed to prevent the return of the wllter to the cellllr. Directly beneath each opening in the roof of the cellar is a carbon electric light backed with a strong reflector. On an upright turning-post near the light is a circular frame, in which are fixed five circulllr plates of colored glass-blue, green, purple, orange, and wbite. The post is turned, the light is covered by one of the plates, and all the water that issues from the jets in this cyliuder is transformed into a column of brilliant fire-blue, green, purple, orange, or white.

As has been said, there lire fifteen cylinders; therefore, to be sure, there are fifteen lights, and five sets of color glasses of five glasses each. The master of a system of quaternions may oblige you by calculating the combinations into which these seventy-five different glasses can be thrown. But the people who which the beautiful spectres of the fountain are too much impressed with the poetry of it to bother with the mathematics of it. The central stream measures one and II half inches in diameter, and the eight subordinate streams one and a quarter inches.

The fountain was made in England, and is said to have cost Mr. Charles T. Yerkes, who presented it to the commissioners of Lincoln Park, $30,000. The work of the erection of the fountain and the management of the sublights were made under the supervision of Mr. Dwight Wiman, son of Erastus Wiman, of New York.