Dedication ceremonies and parade for the Columbian Exposition World’s Fair in Chicago were held on October 21, 1892, but the fairgrounds were not actually opened to the public until May 1, 1893. 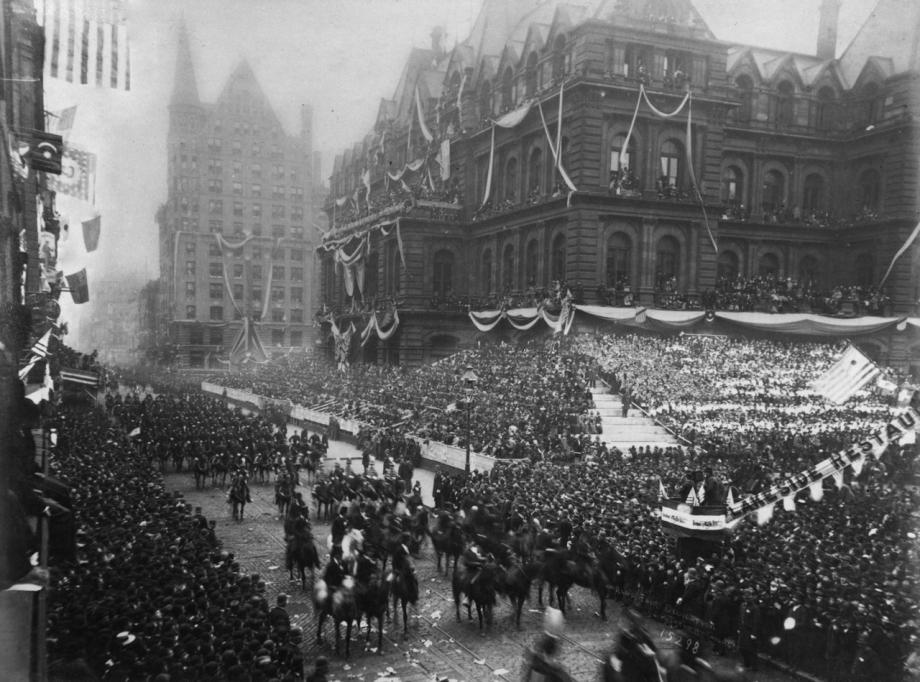 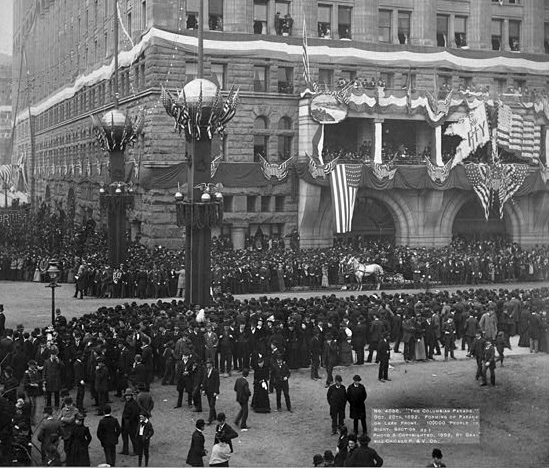 CHICAGO’S GRAND DEMONSTRATION IN HONOR OF COLUMBUS AND THE WORLD’S FAIR.

20th of October, 1892. the day preceding the official dedication of the World’s Fair palaces, was set apart for Chicago’s celebration of the the discovery of America by Columbus. That demonstration is now a matter of history, and in many respects was grander and more imposing than any before ever held, not merely on account of the great numbers taking part, but from its heterogeneous composition includ- ing more notable personages than had ever before been seen in one parade, combined with the many orders of associations representing every class of American citizens

There were Governors and their staffs, in far greater num- bers than any previous parade could boast: there were orators and prelates; city officials; orders comprising merchants and millionaires; orders comprising’ the clerks, the mechanics, the laboring classes the bone and sinew of the country; and there were the school children, the lads and the lasses who will soon take the places of their fathers and mothers in managing public affairs and moulding the opinions for the coming generations. About 75.000 was a very conservative estimate of the number of those in line, which took fully three hours to pass a given point, the pedestrains marching twenty abreast, and the carriages four. The parade formed in Lake Front Park, and at a quarter to twelve the signal gun was fired for the march to commence. The line of march was over Congress to Wabash, Wabash to Lake, Lake to State, State to Adams. Adams to Franklin, Franklin to Van Buren, VanBuren to Michigan Avenue, where they disbanded.

The city was in holiday attire, with buildings bedecked from cornice to sidewalk with the national colors, in streamers and Hags. All business was suspended, and the streets were cleared of all vehicles, not a single one being allowed in the central portion. This was a wise and necessary provision, for the business thoroughfares were packed with the thousands of Chicago’s citizens and the thousands of visitors from all over the country, many of whom had journeyed hundreds of miles to witness this great demonstration. A million of people was a fair estimate of the number of spectators who were that day gathered in a half mile square of the center of this great city. 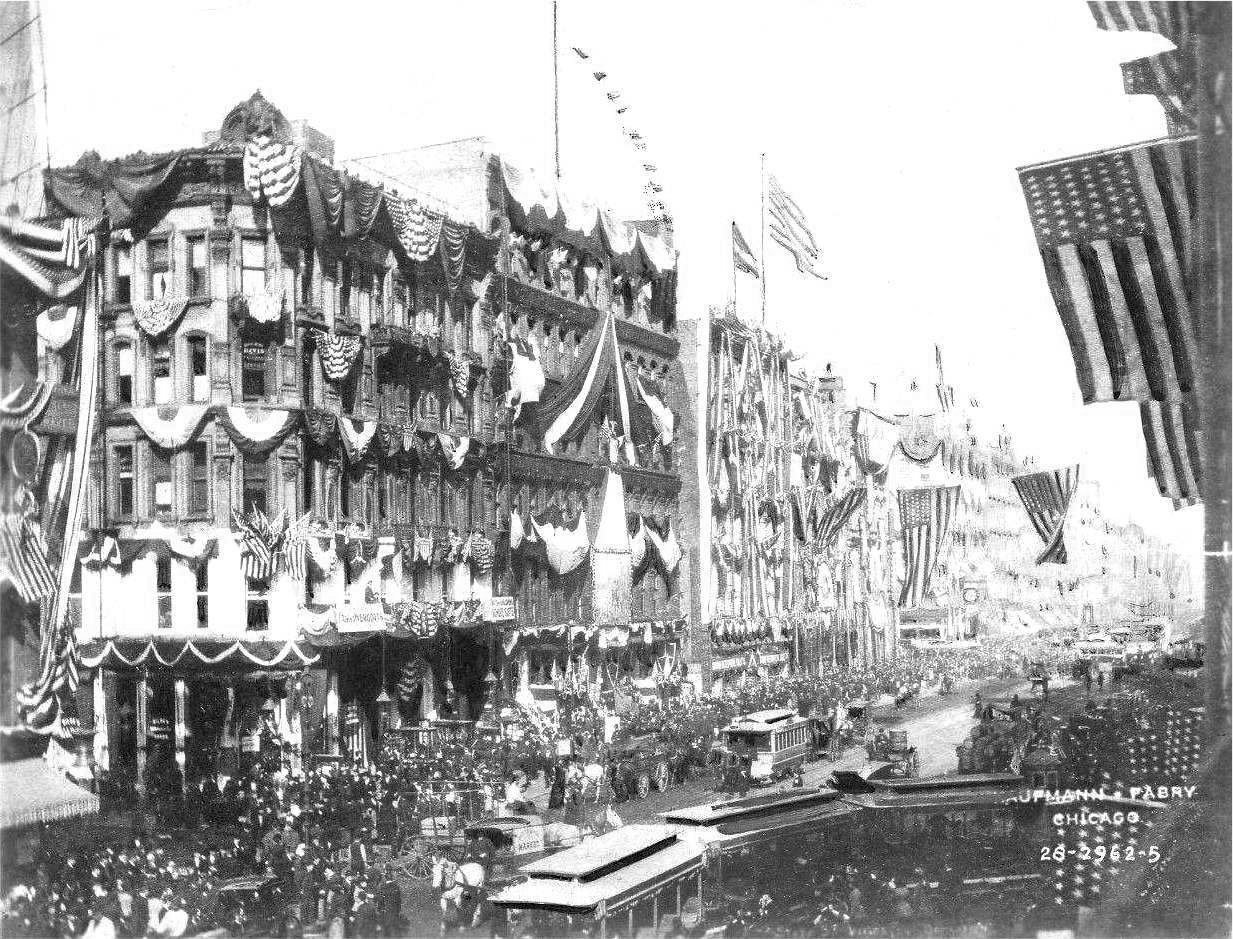 The reviewing stand, occupied by Vice President Morton, the Fair officials, and representatives of foreign governments, was placed on Ad- ams street, in front of the Post Office, on either side of which were tiers of seats occupied by 2,500 children, so dressed and arranged as to repre- sent two enormous American flags.

The following is the order of the procession, with names of the different orders and societies of which it was formed, accompanied by hundreds of bands of every description :

FIRST GRAND DIVISION.
Col. M. D. Birge and aids in command.
Chicago Hussars, escort to City officials and Governors of States
Mayor Washburne, City officials and City Council, in carriages.
Grand Army of the Republic, by posts.
Governors of States and Territories, who, with their staffs, occupied over one hundred carriages; with mounted escort.
Carlisle, Pa., Indian School, composed of 305 native Indian boys. 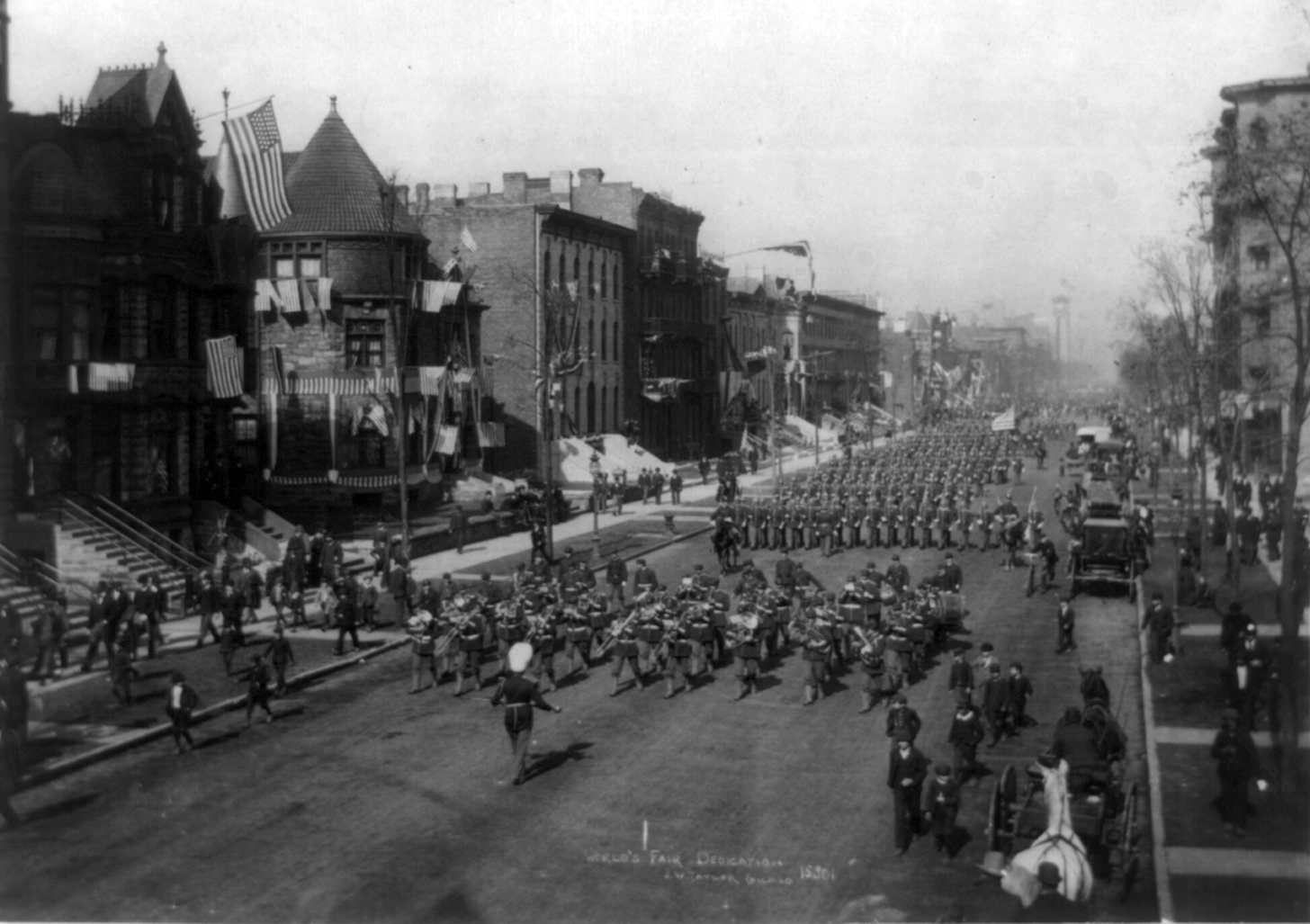 IT PROCEEDS FROM THE AUDITORIUM TO JACKSON PARK

The following is the composition of the big parade by sections, and the order in which they marched, a description of the scenes having previously been given: 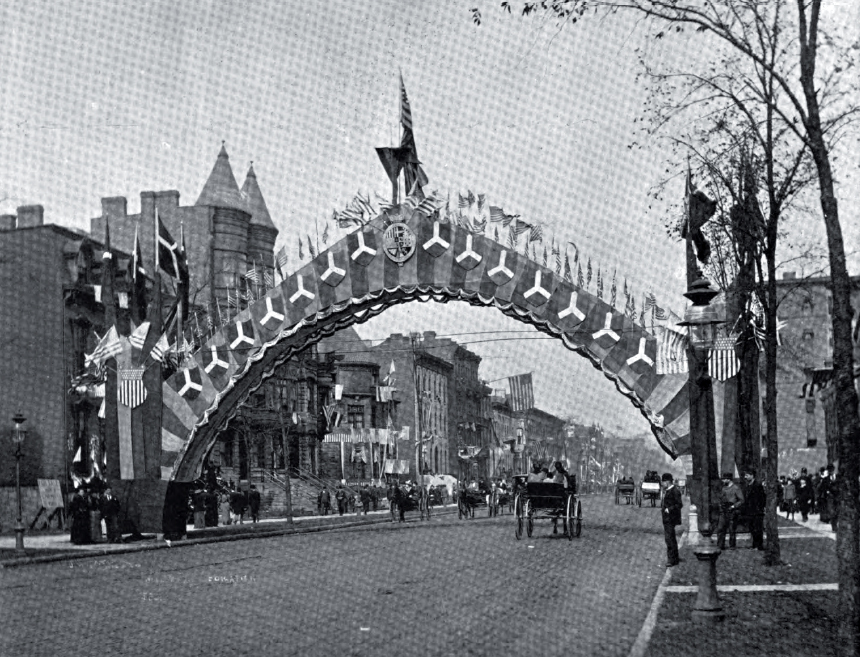 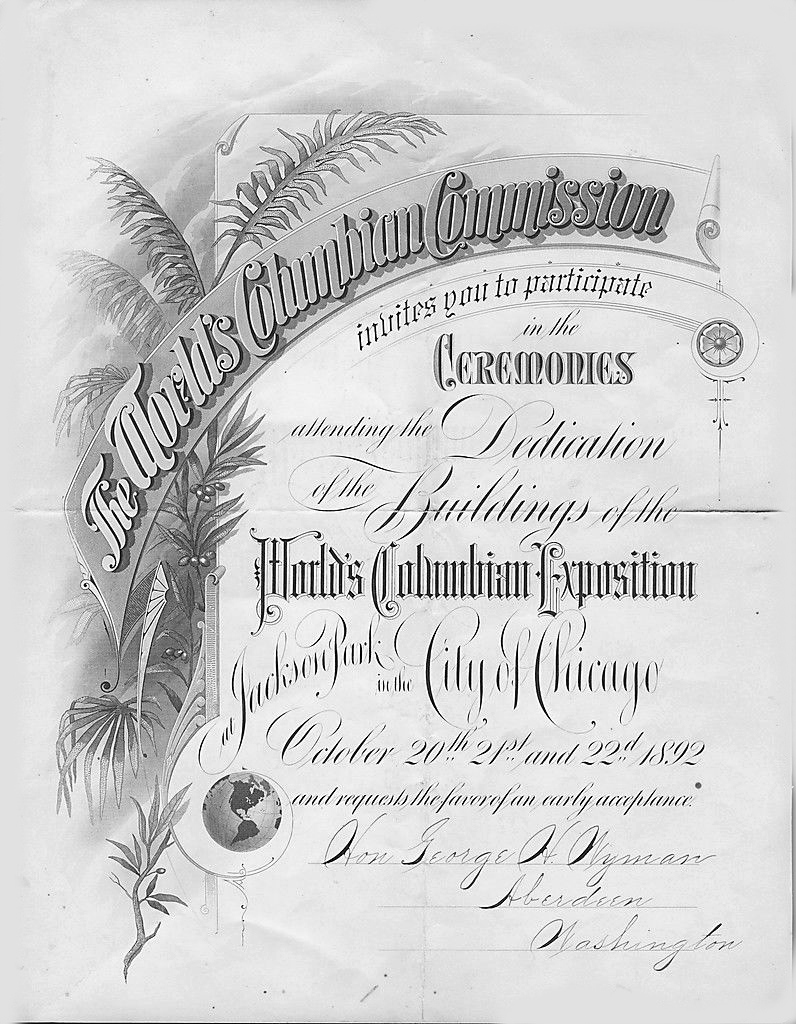 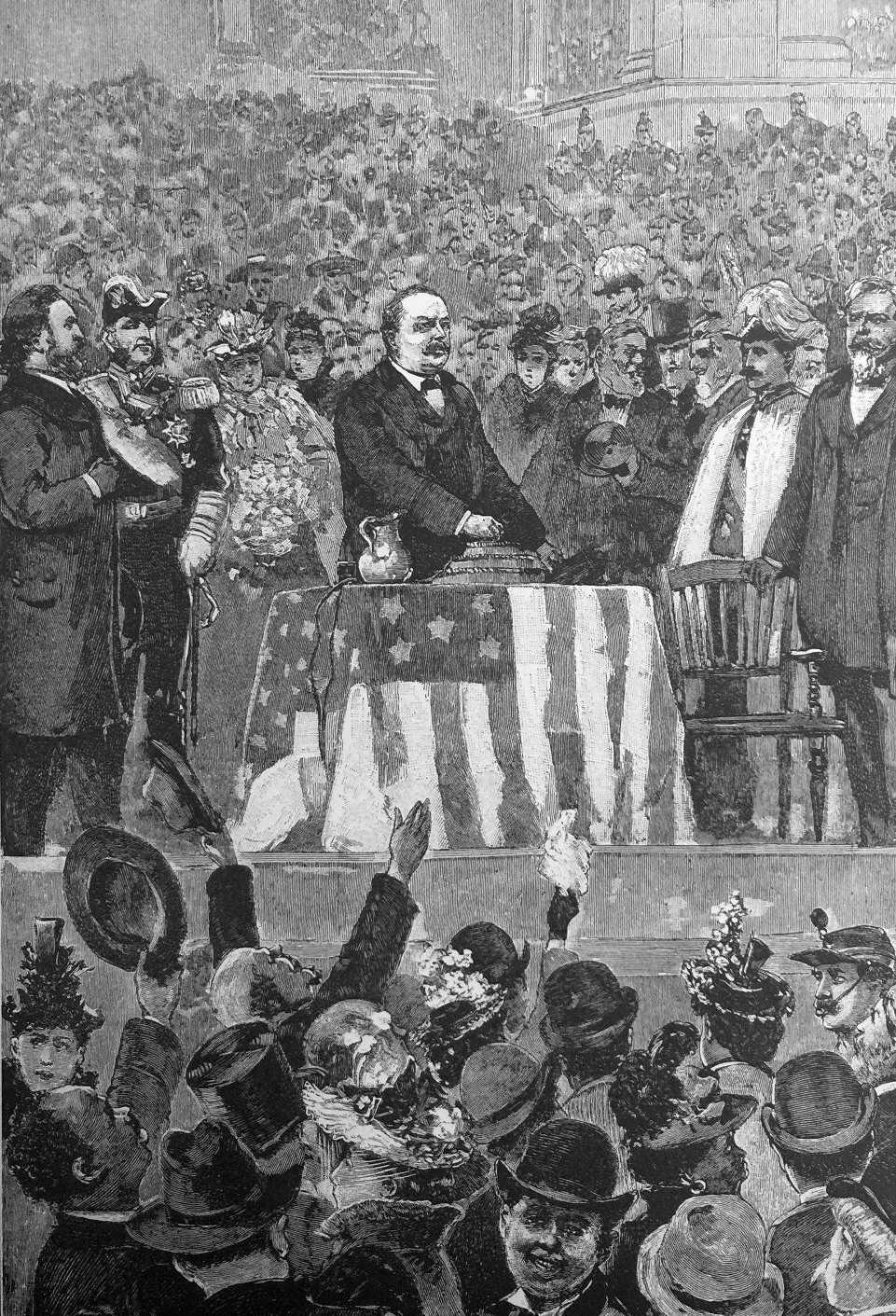 President Cleveland Opening The World’s Fair at Chicago in 1893.