Walter Burridge, the scenic artist, had his sketches stopped by the Custom House authorities at San Francisco for duty. Some friends at that place saw the Collector and arranged the matter without cost to Mr. Burridge. 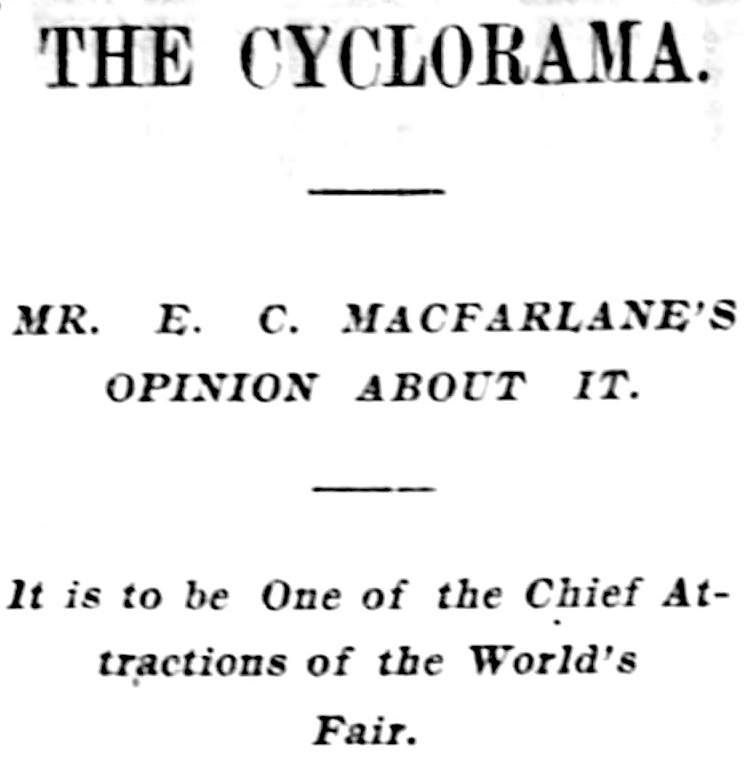 The Cyclorama of the Volcano Kilauea is attracting a great deal of attention in Chicago at present, and according to all accounts it promises to be one of the chief attarctions of the fair.

Mr. E. C. Macfarlane, who has lately returned from the United States, is enthusiastic over the project and when seen by an Advertiser reporter Friday he unbosomed himself as follows:

About the nineteenth of March on my way through from New York I stopped at Chicago because I was particularly interested in examining the work already completed on the Cyclorama.

Mr. Burridge, the artists, was found very busily engaged with quite a force of assistants and the work was almost completed.

I had formed the liveliest anticipation of Mr. Burridge’s efforts, but I was not prepared for such a realistic representation of the volcano. I am satisfied that it is to be one of the chief attractions at the Exposition grounds, if not the chief one.

I consider the work artistic in the extreme and devoid of all tricky effects. The artist has been very painstaking in all the drawing and has elaborated with great thoroughness all the detail work.

Mr. Macfarlane then spoke in the highest terms of the work of Mr. Burridge , and expressed himself ton the effect that if the returns of the cyclorama were at all satisfactory that the stock-holders could afford to make him a very substantial present.

Mr. Macfarlane has also a word of encouragement for the stock-holders, believing that the cyclorama will be one of the great features of the Exposition, as one of the officers in the Director-General’s department assured him that the total receipts from the cyclorama were placed in the excess of $300,000.

As the percentage due the Exposition people is 33¼ per cent, of the gross profits it will be seen that the neat sum of $20,000 will be available for dividends after deducting expenses.

The fact that Mr. Macfarlane has been endeavoring to buy a block of the stock at 50 per cent premium is an index of the present value of the cyclorama shares.

In speaking of some of the realistic mechanical effects of the cyclorama Mr. Macfarlane said that representations of running lava, steam, steam jets, blow holes, etc., will add very materially to the realism of the scene; in short, the work of Mr. Burridge is a masterpiece in its entirety, and undoubtedly it will prove to ne one of the best advertising schemes for the encouragement of tourist travel t o these islands that could have been conceived.

In speaking of the location of the cyclorama, Mr. Macfarlane said that many people had the wrong idea. He said that the building is situated in the midway Plaisance, a street leading to the Exposition grounds proper, and on which villages are located representing town, hamlets, etc., from Europe and other foreign countries. The Cyclorama is situated at the lower end of this thoroughfare, and is most advantageously located. In speaking of the Volcano House affairs, Mr. Macfarlane said for the last three months business was very encouraging. Mr. Lee will leave shortly for Chicago to make a flying trip; but in all probability he will not be absent long. In the meantime Mr. Macfarlane intends to make a trip to the Volcano for the purpose of making provisional arrangement regarding the management of the hotel, and to prepare a business statement of the condition of the company preparatory to calling a meeting of the stockholders.

THE VOLCANO OF KILAUEA (pronounced “Kill-away-ah”) Between the Chinese Theatre and the Ferris Wheel stood the cyclorama of the greatest active volcano in the northern hemisphere. In front of the pavilion was a heroic statue of Pele, the Hawaiian goddess of -re, made by another Chicago artist, Ellen Rankin Copp, the sculptor, and under the canopy a choir of Kanak musicians sang to the public, evoking much applause. The word is or nearly so. The great circular painting was made for a company of which the Hon. Lorin A. Thurston, Hawaiian Minister to the United States, was President, and W. T. Sensen, Manager. Walter W. Burridge, a painter, of Chicago, visited Hawaii and made a two-years’ study of the mountain; thereafter, with a corps of assistants, he painted and built the scene, the entire expense rising to $80,000. The crater is eight hundred feet deep and three miles across. It is a lake of bubbling and thunderous lava set in the side of Mona Loa, a mountain fifteen thousand feet high. The station for the spectator of the picture was a heap of lava which had exuded and solidified in the centre of the crater. A priest climbed the cliffs that rimmed the scene and chanted an invocation to Pele, and his form added to the realism of the effects. The mountain peak and the Pacific Ocean, the baleful fires of the never slumbering volcano, the mists and lava floods, all conspired to make a great picture. 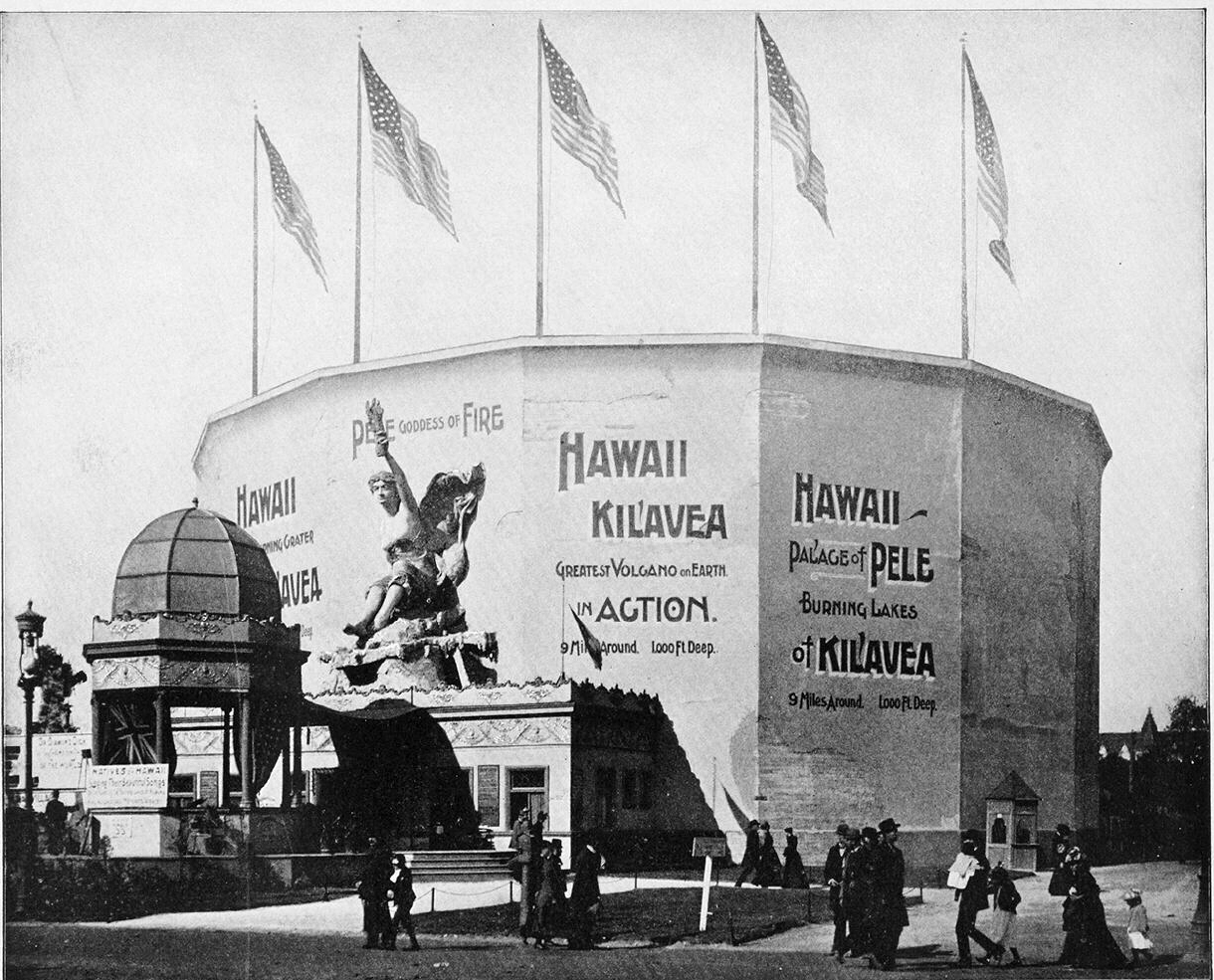 The Kilauea cyclorama on the Midway Plaisance at the World’s Columbian Exhibition, Chicago, 1893.
The Dream City, Halsey Cooley Ives

In connection with the panorama of the Bernese alps may be mentioned that of the volcano of Kalauea, displayed in a polygonal building further to the west of the plaisance and on the opposite side of the avenue. Over the portal is the figure of Pele, the Hawaiian goddess of fie, its pose suggested by the well-known legend of a race wherein the goddess, being worsted by a native prince, pursued him in a chariot of molten lava, hurling fire-brands after him as he sought refuge in the sea. Circling the walls within are some 22,000 square feet or nearly half an acre of canvas, whereon is depicted “the inferno of the Pacific,” the largest volcano on the face of the earth. While not without merit, it does not compare with the other as a panoramic painting, the effect being largely produced by electric lights, pyrotechnics, and other mechanical contrivances. The point of observation is in the very heart of the crater, and not on its brow where thousands of travellers have stood. Gazing upward and around, the spectator is encompassed with [855] a hissing, bubbling sea of lava, with tongues of flame and clouds of steam rising from fathomless pits to overhanging crags and masses of rock. All this is expressed with studied but not with artistic realism, fragments of rock being blended with painted cliffs on which are dummies and painted figures, presumably intended for tourists, while flashlights in various colors, with detonation of bombs and crackers, imitate in showman fashion the awful grandeur of an eruption.

The volcano concession also advertised the first hula troupe to perform at a world fair, accentuating the shift in the character of Native Hawaiian displays in international exhibitions from sovereign, historically-situated, and modern self-presentation to feminized, exotic, tourist curiosity. 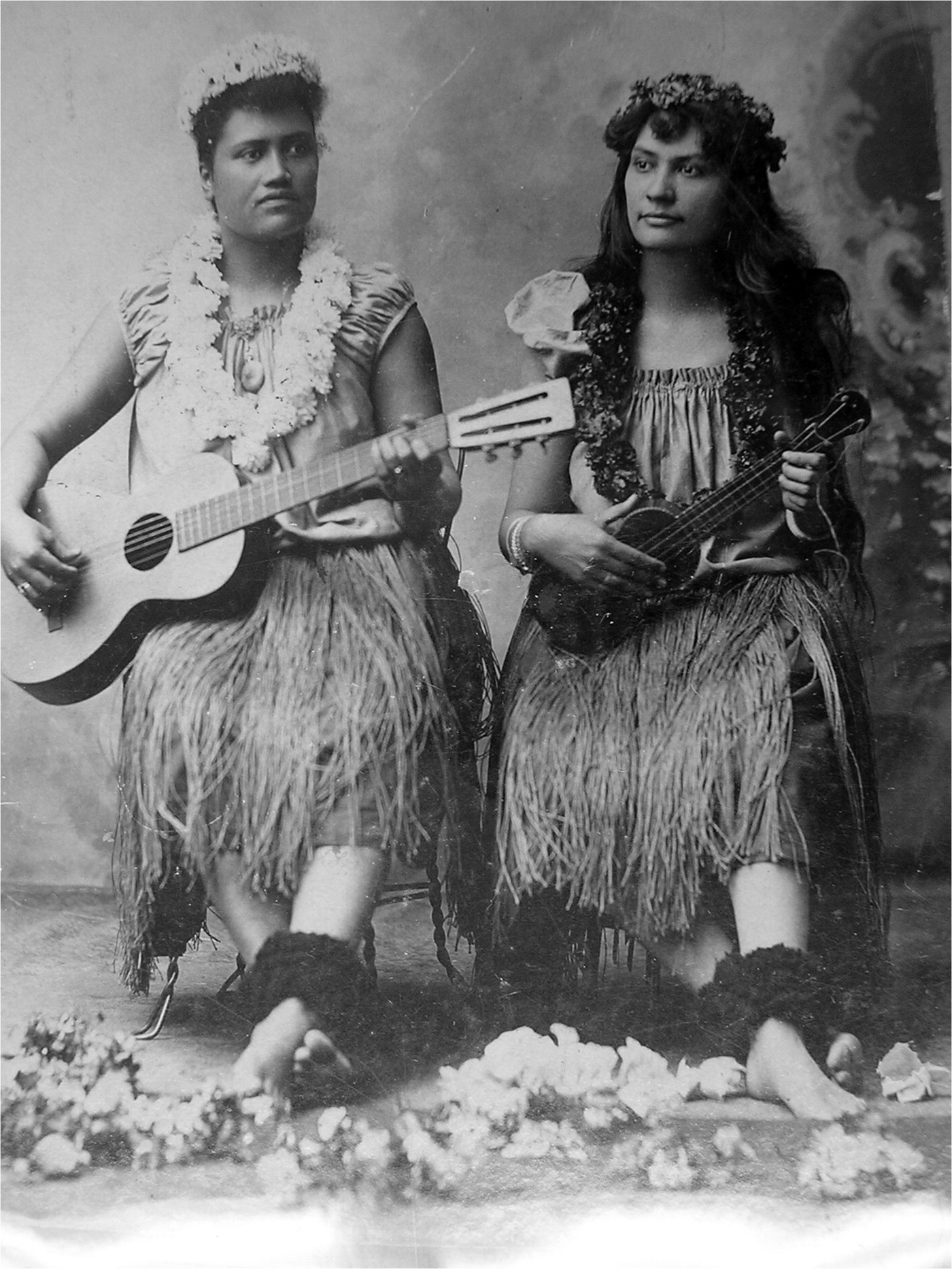 Jennie Wilson and companion performing the hula at Midway Plaisance at the World’s Columbian Exhibition, Chicago, 1893.

Jennie Wilson, whose mother is a native Hawaiian, and an unknown companion, performing at the 1893 Columbian Exposition in Chicago at the Midway Plaisance in an exhibit called the” South Seas Islanders.”

This was the first time the hula was performed in the mainland of the United States. She and her group inadvertently contributed to the bad reputation of the hula with the “come-on” song they were required to sing to urge audiences to see the “naughty hula.”

By the turn of the century, Jennie was to reap the bitter results of this reputation. She reported that island people would spit at her because she was a hula dancer.

The observation platform … places the visitor in the same position that he would occupy if he stood on the brink of the [Halema?uma?u] pit in the vast crater of the volcano [K?lauea]. … The horizon will present the outlines of … [Mauna Loa’s] snow-capped summit, from which issue delicate clouds of smoke, telling of the slumbering fires beneath her crest. Further along the eye meets Mauna Kea, the volcano house, and the blue sea. In the middle distance is the ragged side walls of the first great breakdown, seamed and furrowed with cracks and jagged edges, where the rocks have been rent by many an earthquake. Beneath his foot will be the lakes of fire, liquid lava, foaming, dashing, leaping in the wildest confusion. The floor will be a facsimile of the floor of the crater in every detail, built up of lava, and the fire effects secured by the use of electricity in the most ingenious and complicated contrivances. The observer will stand on lava rock brought from Kilauea.