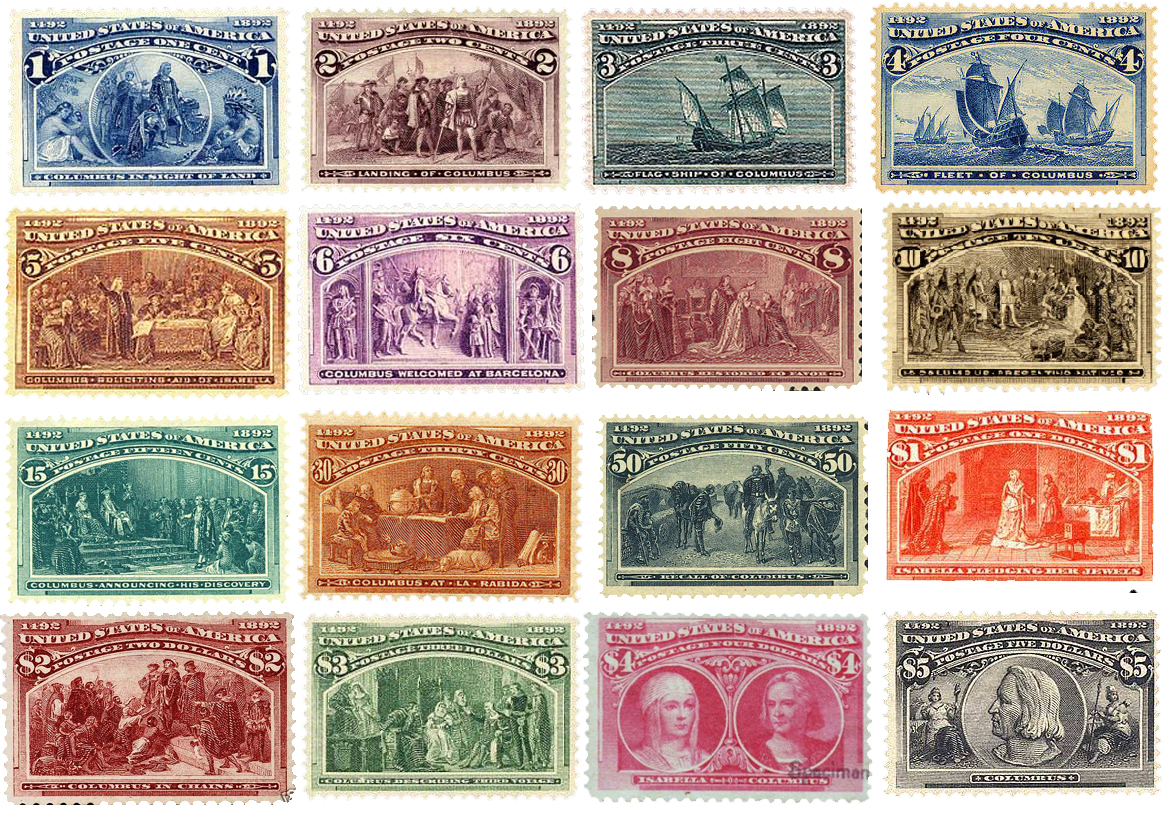 John Wanamaker, founder of the Wanamaker’s department store chain, was Postmaster General from March 2, 1889 until March 6, 1893. He got the idea to commemorate, or recognize, an historic event with special stamps designed for that purpose. The ultimate result was the Colombian Exposition issue. This colorful and elegant series of stamps, the first commemoratives ever issued in the United States (or the world, for that matter) celebrated the 400th anniversary of Columbus’s landing in the New World in 1492, by portraying a number of scenes from Columbus’ life. Instead of presenting them in chronological order with increasing postage value, Wanamaker decided to portray the most important events in his life on the least expensive (and most commonly used) stamps in the series.

1¢ “Columbus in Sight of Land”
Adapted from a painting by William H. Powell. Engraved by Alfred Jones

Jones added three Indians to the sides of the image, making this the first United States postage stamp to depict Native Americans. This stamp was used to cover the cost of either the postal card rate or third class mail. A total of 440,195,550 one cent stamps were printed. The one-cent “Columbus in Sight of Land” was ranked #46 in the book 100 Greatest American Stamps by Janet Klug, Donald Sundman, 2008.

2¢ “Landing of Columbus”
Adapted from a painting by John Vanderlyn. Engraved by Douglas Ronaldson.
The stamp depicts a scene one day after the image on the one cent Columbian. Yet while the earlier stamp shows the renowned explorer looking clean-shaven, here he has a full beard! Because two cents covered first-class mail at the time, 1,464,588,750 two-cent stamps were printed, making it the most common Columbian today.

3¢ “Flag Ship of Columbus”
Inspired by a Spanish engraving. Engraved by Robert Savage.
Because it did not cover a specific postal rate, it was a “make-up” stamp, used in conjunction with other stamps to meet postage costs. Just over 11.5 million of these stamps were printed.

4¢ “Fleet of Columbus”
No information on the original image or engraver.
The stamp covered double postage on heavier first class items; in all, 19,191,550 four-cent stamps were printed.

5¢ “Columbus Soliciting Aid of Isabella”
inspired by an 1884 painting by Vaclav Brozik. Engraved by Alfred S. Major.
Five cents was the half-ounce international postage rate at the time; 35,248,250 of these stamps were printed.

6¢ “Columbus Welcomed at Barcelona”
The illustration was taken from a bronze door panel designed by Randolph Rogers. Engraved by Robert Savage.
This stamp covered three times the first class postal rate. In all, 4,707,550 of these stamps were issued, but 48,400 remainders were destroyed in Washington in 1899.

8¢ “Columbus Restored to Favor”
This design came from a painting by the Spanish artist Francisco Jover y Casanova. Engraver unknown
A latecomer to the series, the eight-cent Columbian was added on March 2, 1893, after the US registered mail fee was lowered. It was the first eight-cent stamp ever issued by the United States. A total of 10,656,550 of these stamps were issued.

10¢ “Columbus Presenting Natives”
From a painting by Luigi Gregori. Engraved by Robert Savage.
This denomination of stamp covered the registered mail fee. A total of 16,516,950 ten-cent stamps were issued

15¢ “Columbus Announcing His Discovery” – Based on a painting by Spanish artist Ricardo Baloca y Cancico. Unknown engraver.
This stamp could be added to other stamps to meet postal costs for heavier items.

30¢ “Columbus at La Rabida” – Based upon a design by Spanish artist Felipe Maso.
The thirty-cent Columbian depicts Columbus being encouraged by Franciscan friars of the Convent of Santa Maria de Rabida to ask the King and Queen a second time to underwrite his first voyage. Used chiefly as a “make-up” stamp to help cover postage on heavier items. In all, 1,576,950 were issued.

50¢ “Recall of Columbus”
Based on a painting by American artist Augustus Goodyear Heaton. Engraver unknown.
The first fifty-cent postage stamp ever printed, this Columbian features an image that is now owned by the United States Senate. The usefulness of this stamp was limited to heavyweight international items; therefore, only 243,750 of these stamps were issued.

$1 “Isabella Pledging Her Jewels”
Based upon a painting by Antonio Muñoz Degrain. engraved by Robert Savage.
This stamp was the first ever issued at a value above ninety cents. Like the other even-more-costly stamps in this set, it was intended mainly to appeal to collectors, serving as a source of revenue for the US Post Office Department while also advertising the Columbian Exposition. Because they were so expensive, there were far fewer of these dollar-value stamps printed; in the case of the one-dollar Columbian, only 55,050 were ever produced. The one-dollar “Isabella Pledging Her Jewels” was recently ranked #24 in the book 100 Greatest American Stamps by Janet Klug and Donald Sundman, 2008.

$2 “Columbus in Chains”
Based upon a painting by Emanuel Leutze. Engraver unknown.
This Columbian is one of only two in the series (along with the two-cent “Landing of Columbus’) that depicts Columbus in the New World. Like the one-dollar stamp, this one was mainly acquired by collectors. Only 45,550 were printed. The two-dollar “Columbus in Chains” was recently ranked #48 in the book 100 Greatest American Stamps by Janet Klug and Donald Sundman, 2008.

$3 “Columbus Describing Third Voyage”
Inspired by Francisco Jover y Casanova. Engraved by Robert Savage.
Only 24,713 of these stamps were sold. This stamp was recently ranked #36 in the book 100 Greatest American Stamps by Janet Klug and Donald Sundman, 2008.

$4 “Isabella and Columbus”
Based on a painting by Lorenzo Lotto. Engraver unknown.
The carmine four-dollar Columbian was the first US postage stamp to depict a woman, Queen Isabella of Spain. Another nine years would pass before a second woman, Martha Washington, was honored with a stamp. Only 22,993 of these stamps were sold. The four-dollar “Isabella and Columbus” was recently ranked #40 in the book 100 Greatest American Stamps by Janet Klug and Donald Sundman, 2008.

$5 “Columbus”
The design for both was taken from an earlier Columbus medal struck in Madrid, probably designed in turn by Olin L. Warner of New York. The figures on the left and right of Columbus were probably engraved by Charles Skinner

The five-dollar Columbian features a coin engraved with a bust of Christopher Columbus. Alfred Jones engraved both the stamp and the original half-dollar coin issued by the United States Mint.

The most popular stamp in the Columbian series, the five-dollar Columbian “has an almost mystical aura in the United States philatelic community,” according to Alexander Haimann of the National Postal Museum. Philatelic historian Lester Brookman describes this stamp as “the very peak of desire for a great many collectors.” Only 21,844 were sold. An additional 5,506 were printed, but were subsequently destroyed by the Postal Department in June, 1899. The five-dollar “Columbus” was recently ranked #4 in the book 100 Greatest American Stamps by Janet Klug and Donald Sundman, 2008.