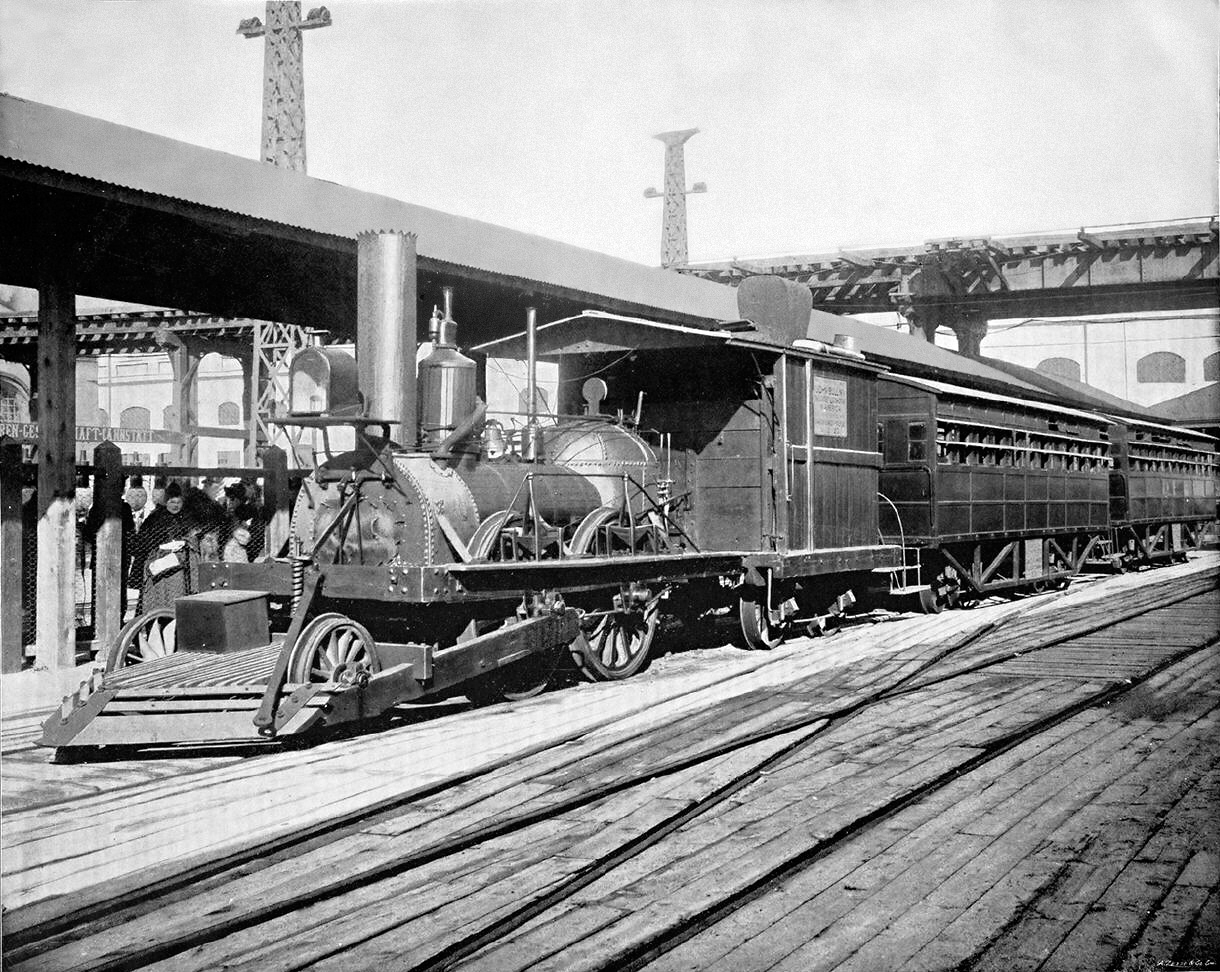 On her westward trip the John Bull, with her two primitive coaches, left New York at 10 A.M. on the 17th of April, arriving at Chicago, after a triumphal procession, on the afternoon of April 22nd. The engine was run as swiftly as its condition would allow, with its wheezy boiler and rusty apparatus, followed by a special train of officials and journalists, and passing at times between throngs of enthusiastic spectators, waving hats and handkerchiefs as the timeworn relic went snorting past, with warning note of bell, resembling the sound of a dinner gong. The engine kept excellent time, though rumbling awkwardly over the rails and swaying to and fro like a vessel rolling in the trough of ocean. The tender is within two feet of the furnace door, and upon it is an odd-looking contrivance shaped like a poke bonnet, and called the gig top, where the forward brakeman sat, keeping a sharp lookout for other trains. The John Bull was driven by the same engineer who handled the locomotive forty-two years ago, and, as he said, “obeyed the lever as if her joints were not worn with age and stiff with rheumatism.”

From The Dream City: A Portfolio of Photographic Views of the World’s Columbian Exposition, 1893

THE JOHN BULL TRAIN – As the New York Central Railroad exhibited a replica of its first train – the DeWitt Clinton engine and cars – therefore the Pennsylvania lines, whose model depot was just across the avenue, went a step further, and brought to Chicago its first locomotive and train, dating from 1831 – a genuine working relic of Camden & Amboy days. This train is portrayed with great detail in the engraving, but its dimensions are possibly exaggerated to the eye. Contrasted with the big modern locomotives, whose boilers sit high over the tall drive wheels, the John Bull was a toy, and was used all summer by the people as a pet plaything. On every successful day of the Fair it went puffing in and out of the Terminal Station, giving stop-over tickets to the passengers, and sounding its sharp little whistle for the delectation of the people – especially railroad men. On October 12, 1893, William Finlayson, eighty-one years old, conductor of the first passenger train run in America, on the Nova Scotian road, commanded the John Bull excursions around the yards, and ten trips were made that day, accommodating a thousand travelers. The aged pioneer stood at the steps of the old cars and aided the ladies to board the train, as he had done fifty-four years before on the initial journey of his road. The journey of the John Bull train from Jersey City to Chicago, in April, 1893, was made in triumph, and it returned to the East with added eclat.