One of the most interesting buildings on the grounds, is that which stands for woman’s progress in the arts and sciences. The Woman’s building is situated in the northwestern part of the park, separated by a generous distance from the Horticultural building on one side and the Illinois State building on the other. It faces the great lagoon, which directly in front of it, takes the form of a bay about 400 feet in width. It is the first structure of national importance to be designed and run by women, designed by Boston architect Sophia Hayden. 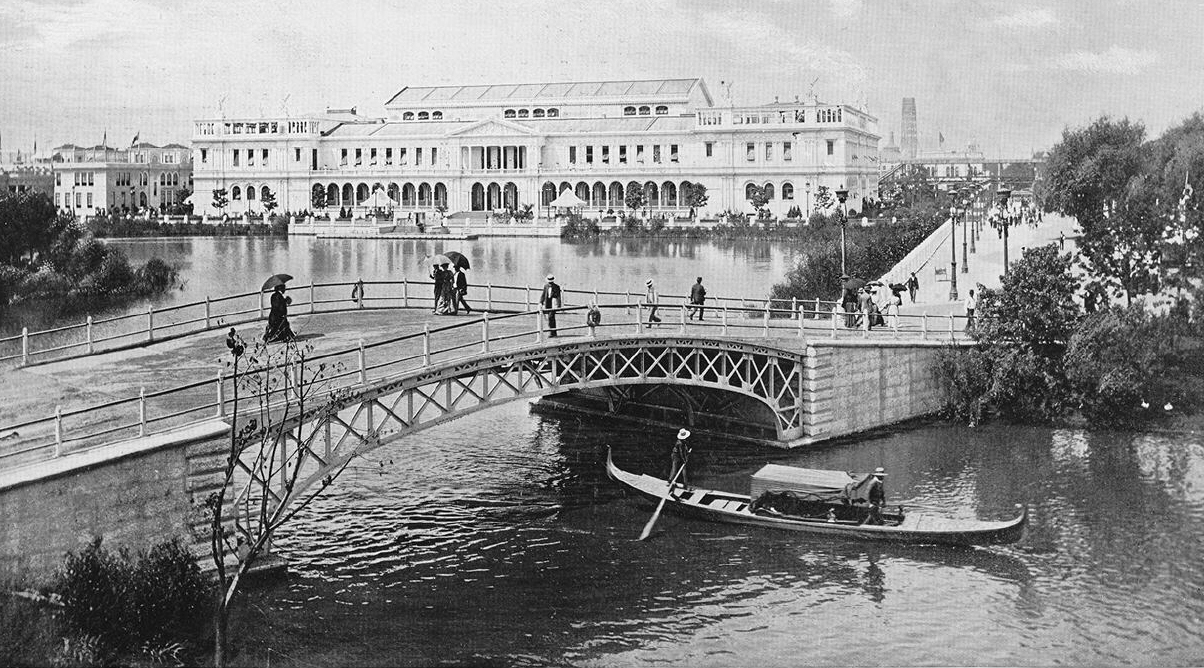 From this sheet of water, ascent is made to the building by terraces and broad stairways. The architecture of the building is in the Italian renaissance. The principal facade has an extreme length of 400 feet, the depth of the structure being half this distance. The main grouping consists of a center pavilion, flanked at either end with corner pavilions, connected in the first story by open arcades, forming a shady promenade the whole length of the structure. The first story is raised about ten feet from the ground line, and a wide staircase leads to the center pavilion. This is finished with a low and finely proportioned pediment, enriched with an elaborate bas-relief. The corner pavilions have each an open colonade added above the main cornice. Here are located the hanging gardens and the committee rooms of the Board of Lady Managers.

A lobby 40 feet wide leads into the open rotunda, which reaches through the entire height of the building, and is protected by a richly ornamented skylight. This rotunda is surrounded by a two-story open arcade, having the effect of an Italian court yard.

The sculptor of the Woman’s building is Miss Alice Hideout, of San Francisco. Her subjects are “Three Fates,” six casts of each, and “A Family Group, ” making twelve groups in all. These are the figures which surmount the building. The pediment of the east and west entrances, represent the various works in which women are Interested. The mural decorations of the building have been completed under the direction of Mrs. Candace Wheeler, of New York. In her work she has been assisted by Miss Dora Wheeler Keith. 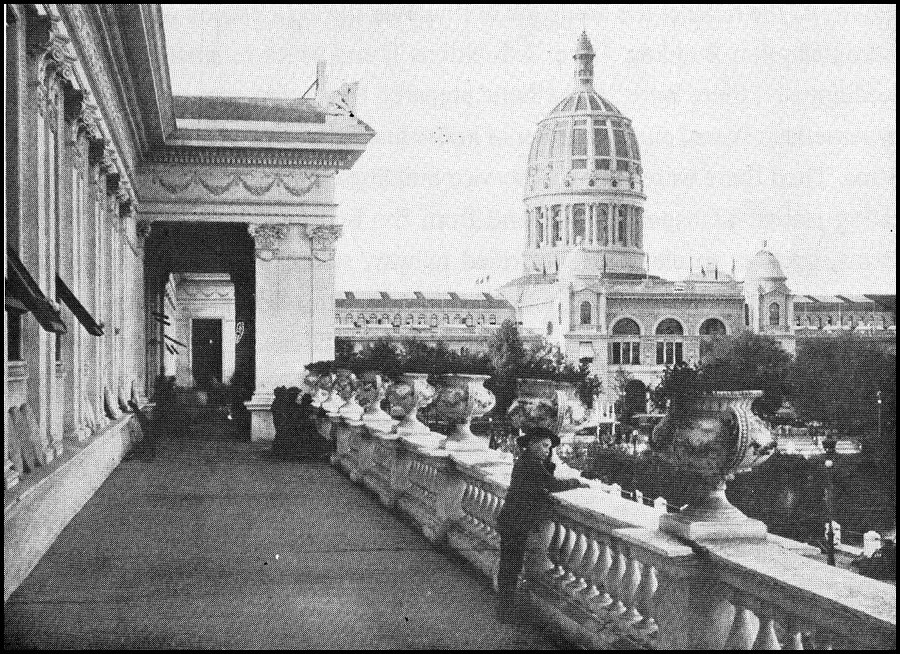 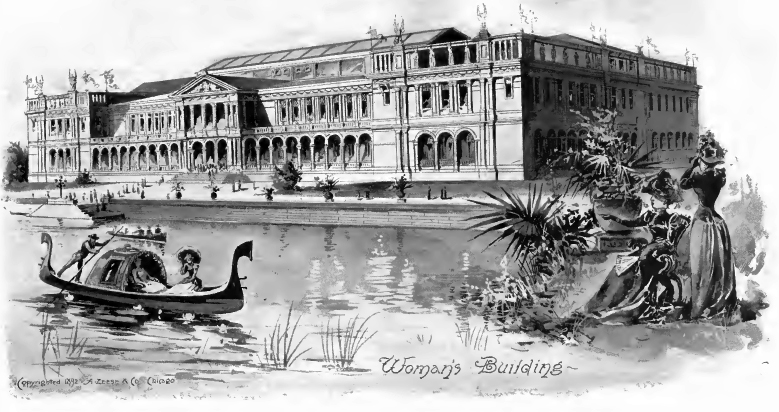 INTERIOR OF THE WOMAN’S BUILDING—The interior of the Woman’s Building, viewed from the gallery end, presented an exceedingly attractive appearance. The great space was admirably lighted from the skylight over the central court, and the objects on display were visible with exceptional distinctness. Very curious and interesting were many of these objects, the character of which may be vaguely discerned in the illustration. A feature of the exhibits in this building was that many of them had a personal interest of exceptional character. For instance, there was a painting by Queen Victoria, one which, if painted by anyone else would have been pronounced but crude and commonplace, but which, having been painted by a queen, attracted vast attention. There was a painting of two boys—Paris gamins—by Marie Bashkirtseff, an admirable thing in its way; and there were quaint old tapestries and portraits of famous dames; there were a thousand things in the way of what might be expected, too, that is, in the display of those dainty things which make the difference between the houses of the cultivated and the uncultivated; there was a beautiful exhibit of old plates and delicate Chinaware, and a host of things that a woman loves and which affect the man insensibly, though perhaps he could not tell just how. Interesting not to women alone but to men, was a visit to this building, because of its gentle curious if for nothing else. Because of the skylight, everything was pleasant and of bright womanliness. It was a very cheerful place. 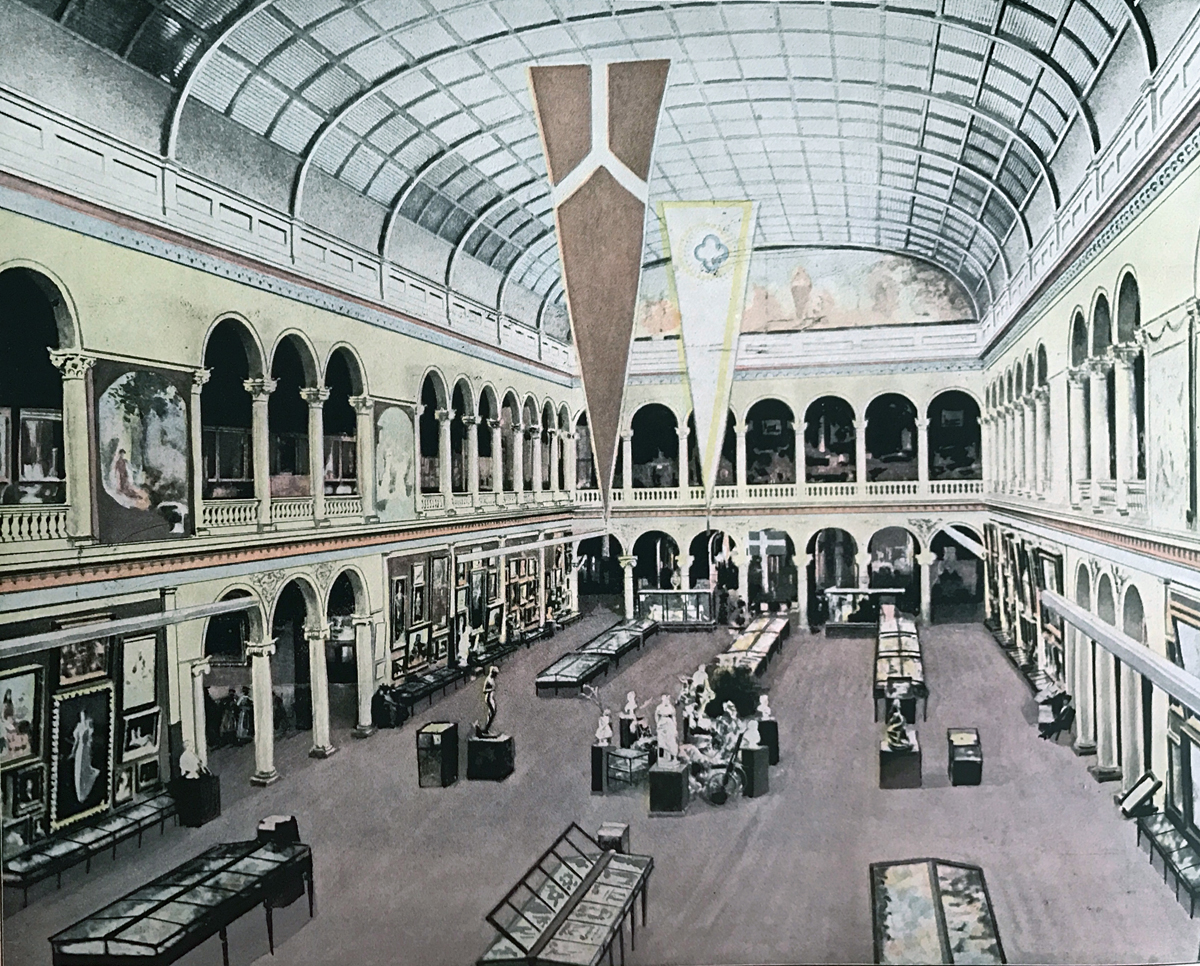 ENTRANCE TO WOMAN’S BUILDING.—The view given in the accompanying illustration is of the east portal to the transept of the Woman’s Building, and it may be said of it, as might be said of other portion , of the edifice, that it appeared best upon a close inspection. The building, accidentally, no doubt, but none the less certainly, had a feminine character, lacking boldness and strength of conception, but charming in its parts and showing close and tasteful attention in its details. The triple arches, with Ionic columns between, were pleasant to look upon, and the bal-cony above, its entablature supported by Corinthian columns, added to the general gracefulness of the effect. The triangular bas-relief appearing on the pediment was the work of Miss Alice Rideout, of California, and represented various commendable occupations.of the gentler sex, among the figures being those typifying “Charity,” ” Beneficence, ” Literature,” “Art ‘. and ” Home Life.” The entrance porticos projected some fourteen feet from the main wall of the building. The pretty windows in the rear of the balcony show with good effect in this picture, but of course would not be visible to any one standing very close to the entrance. A position very near the edge of the West Lagoon was, in many respects, the best from which to contemplate the Woman’s Building. 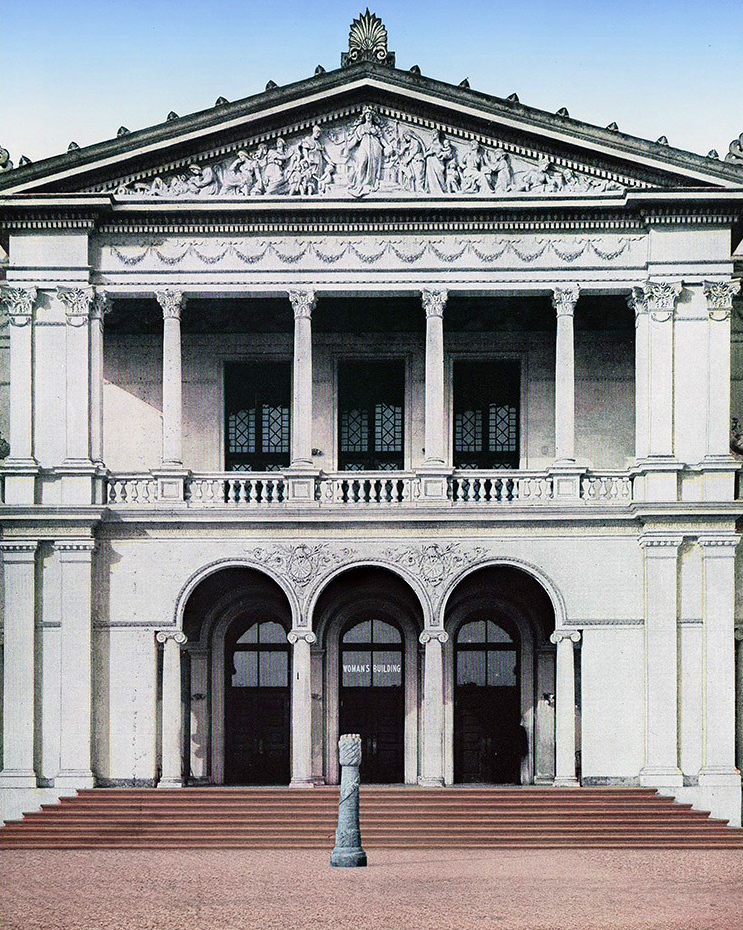