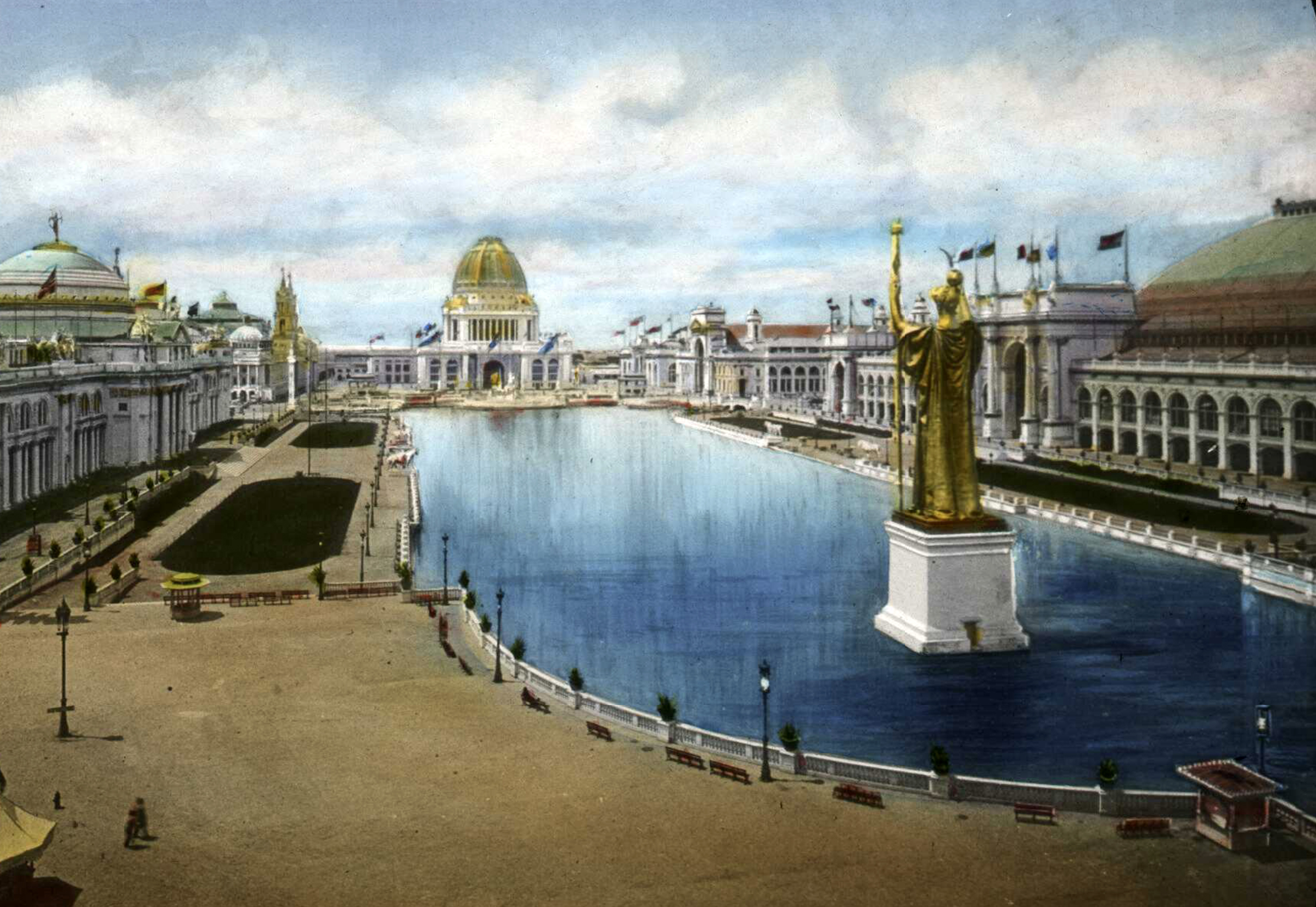 From Picturesque World’s Fair, An Elaborate Collection of Colored Views
Published with the endorsement and approval of George R. Davis
Published By W. B. Conkey Company,
Official Publishers of the World’s Columbian Exposition Catalogue, Etc., Chicago.

THE COURT OF HONOR BY MOONLIGHT.—Of all the magnificent spectacles the Columbian Exposition afforded the view of the Court of Honor by moonlight seems, by common consent, to be accorded the first place. The effect of wonderful lights upon the glorious white buildings and on the waters, the electric flashes through the air, the sky scene made more beautiful, if possible, by the addition of the beauties below, the passage of gondolas and launches with their merry parties slipping through light and shade, the gleaming and shifting splendor of the fountains, the sensuous music filling the air, all combined to make such a scene one unsurpassable and likely to be unforgotten. The view given above is from the east end of the Grand Basin with the statue of The Republic in the immediate foreground and the Administration Building in the distance. Above a full moon with a few fleecy clouds which neither obscure her nor the myriads of stars add to the charms of the particular night. From the Manufactures Building on the right a blaze of electric glory makes wonderful lights and shades upon the Agricultural Building to the south and brings out statuary and architectural features in white relief. At the west end of the basin the fountains are in full play and their bright colors are but varied by the band of white light between. The water lies like a silken carpet. It is a dream picture—no other term will fit it—and it is true to the scene as it appeared. A wonderful thing was the Court of Honor at night, something hardly even imagined before, unless as a picture in a fairy tale or in some oriental story. But it was a reality. 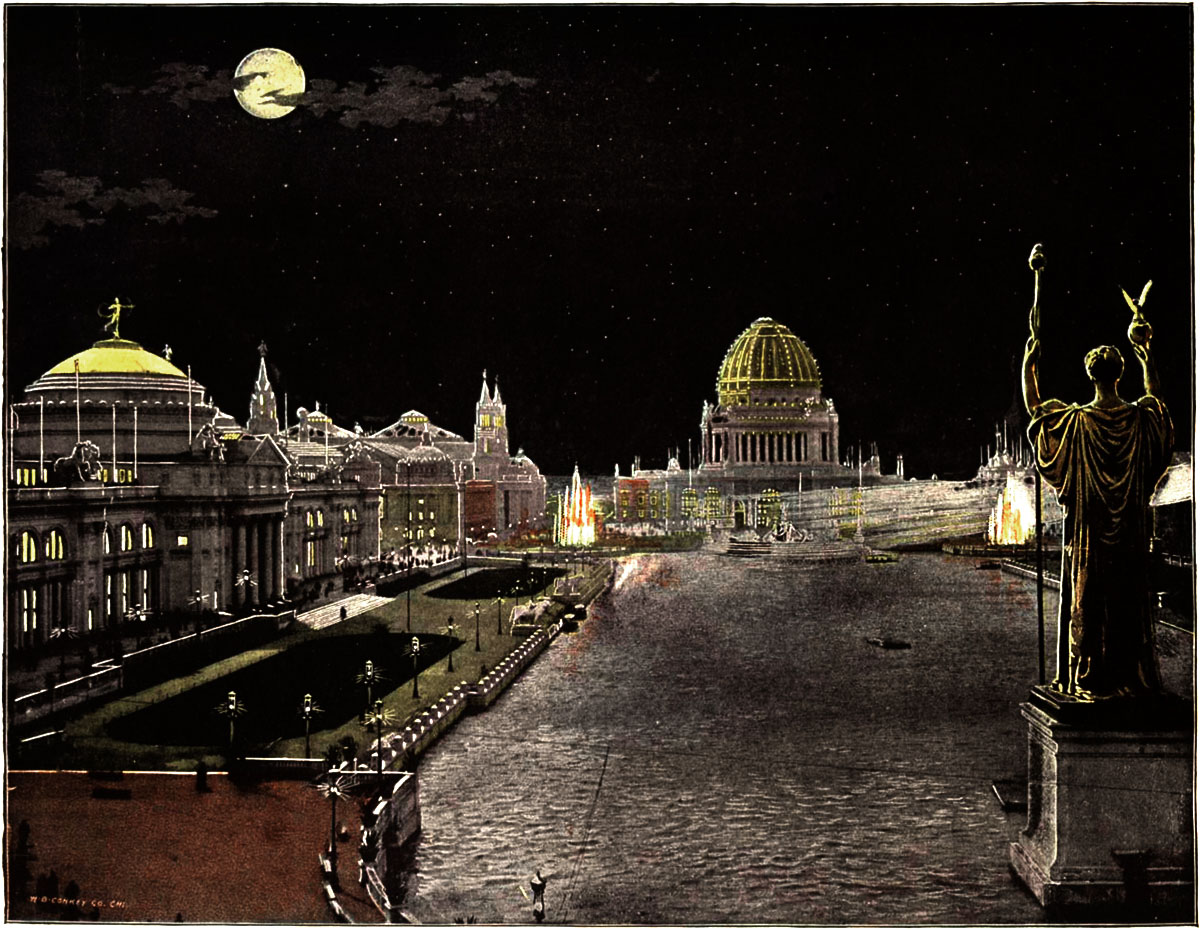 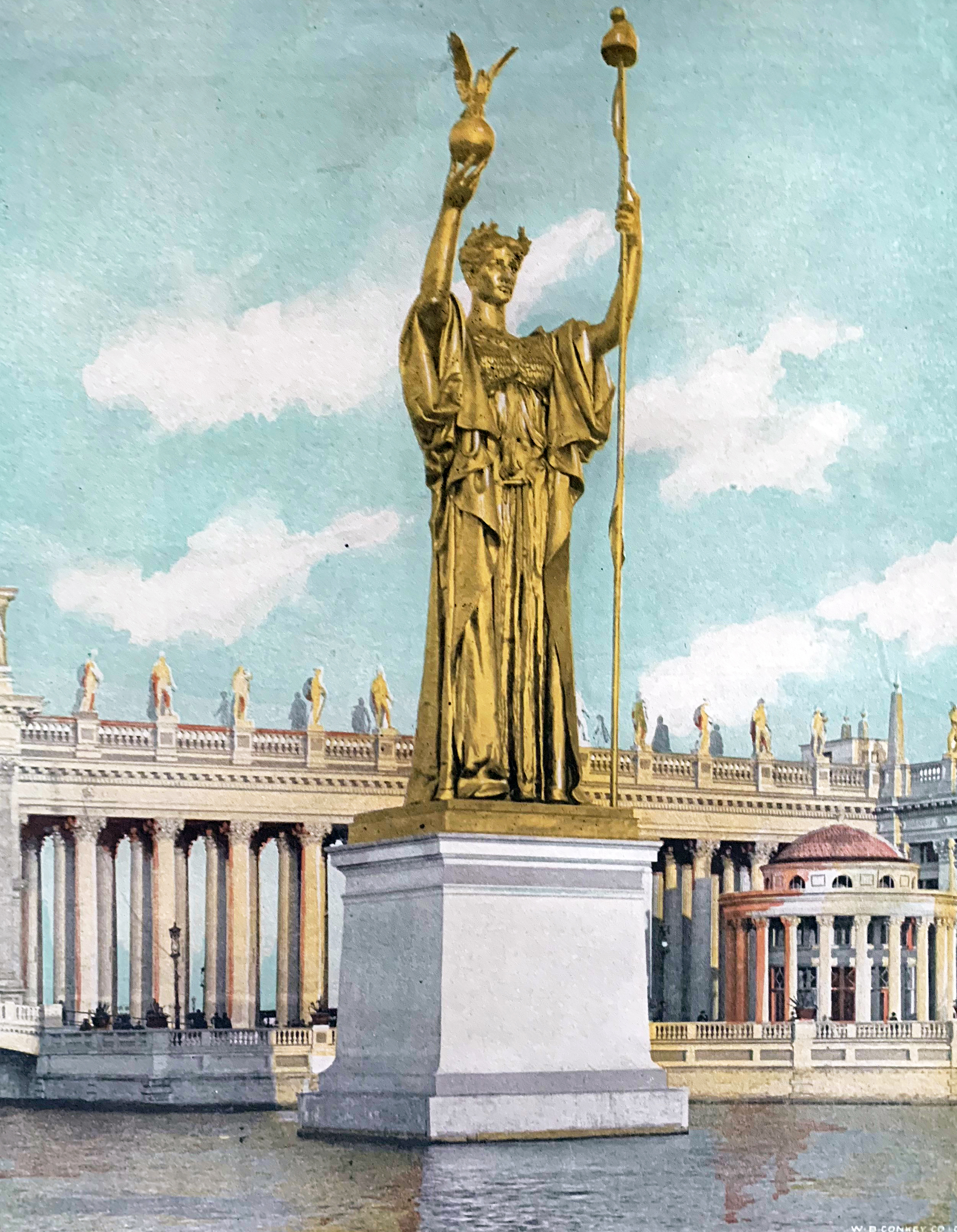 Statue of the Republic 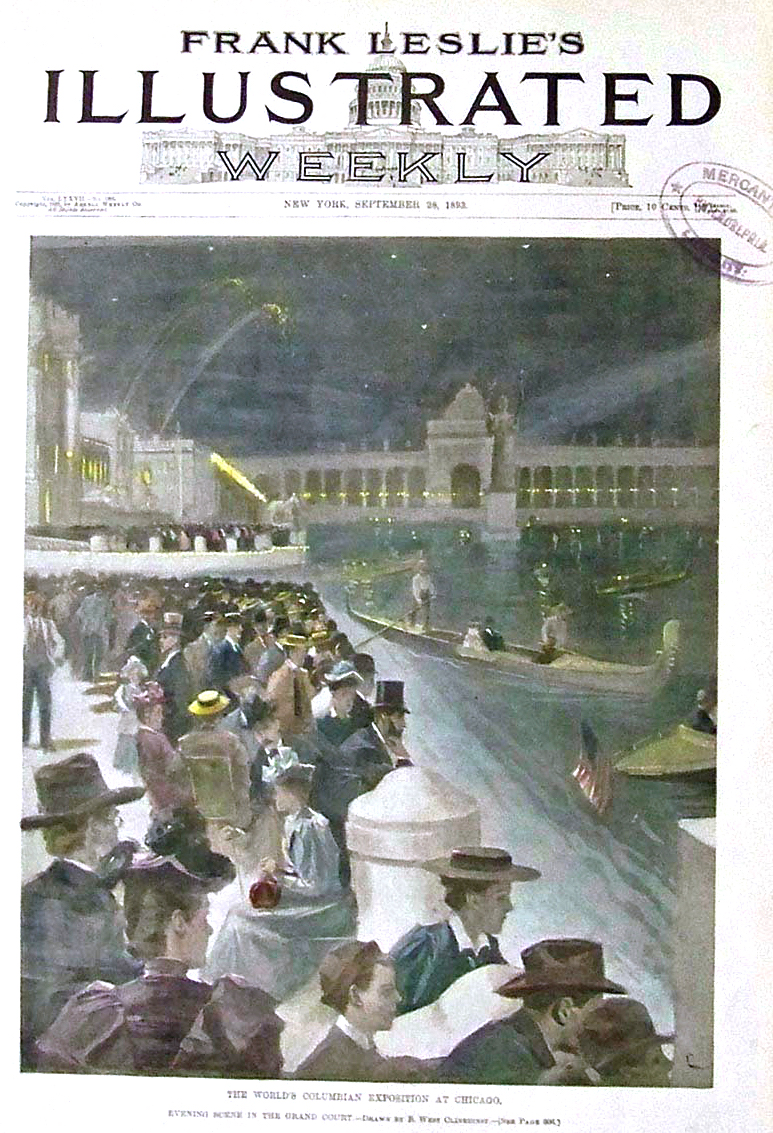 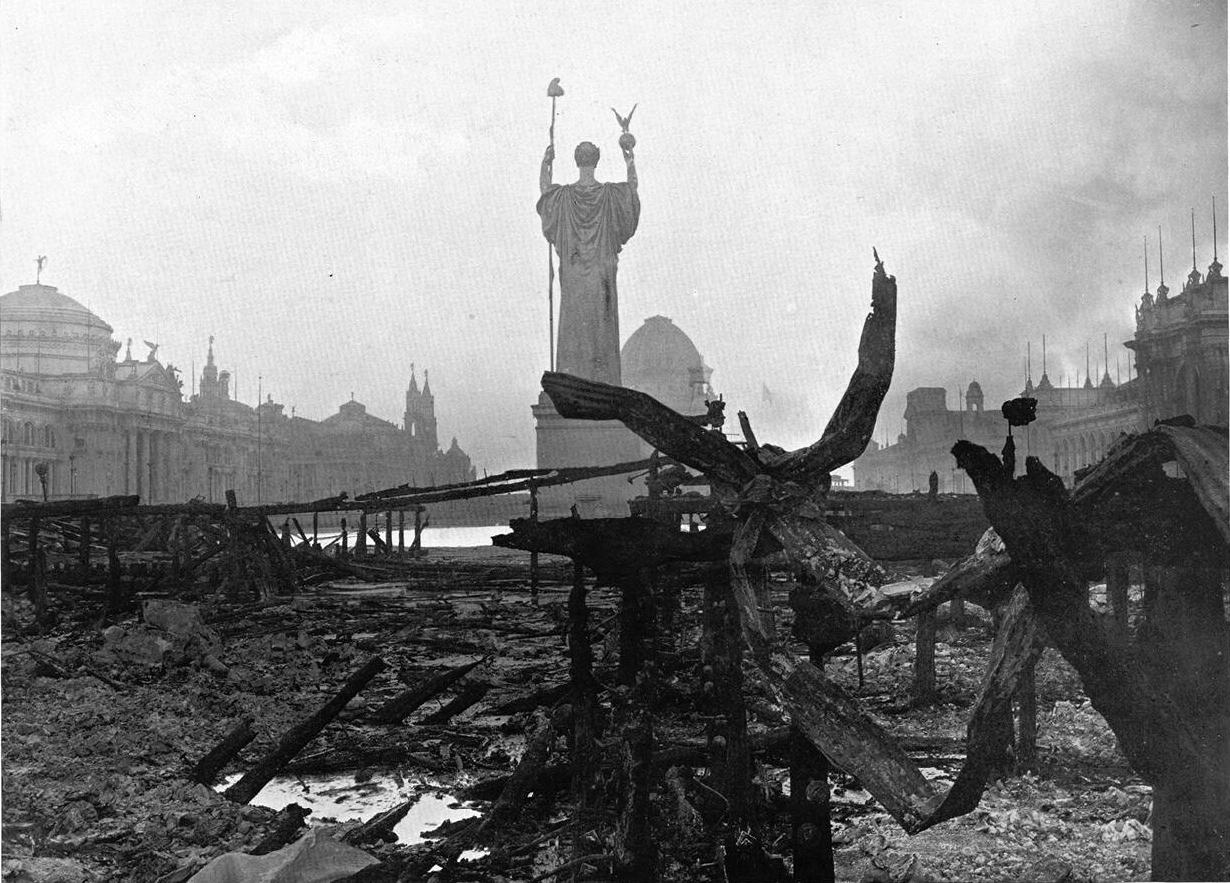 Westward she looks; around her lies
A desolated scene,
Where mid a summer’s palaces
She held her court as queen.

Behind her mourns the inland sea;
Before her stretches far
Her prairie—empire of the West
Beyond the horizon’s bar,

Not all alone, for Egypt lifts
Her obelisk in sight;
Rome’s pillar of the fretted prows
Stands close upon her right.

Ghosts of the ages that are gone,
Prophets of days to be,
Proclaim in wisdom and in might
That Love is Liberty,

Republic hail! Though beauty dies,
The peoples shall be one.
Rejoice O World, our Golden Girl
Stands shining in the sun! 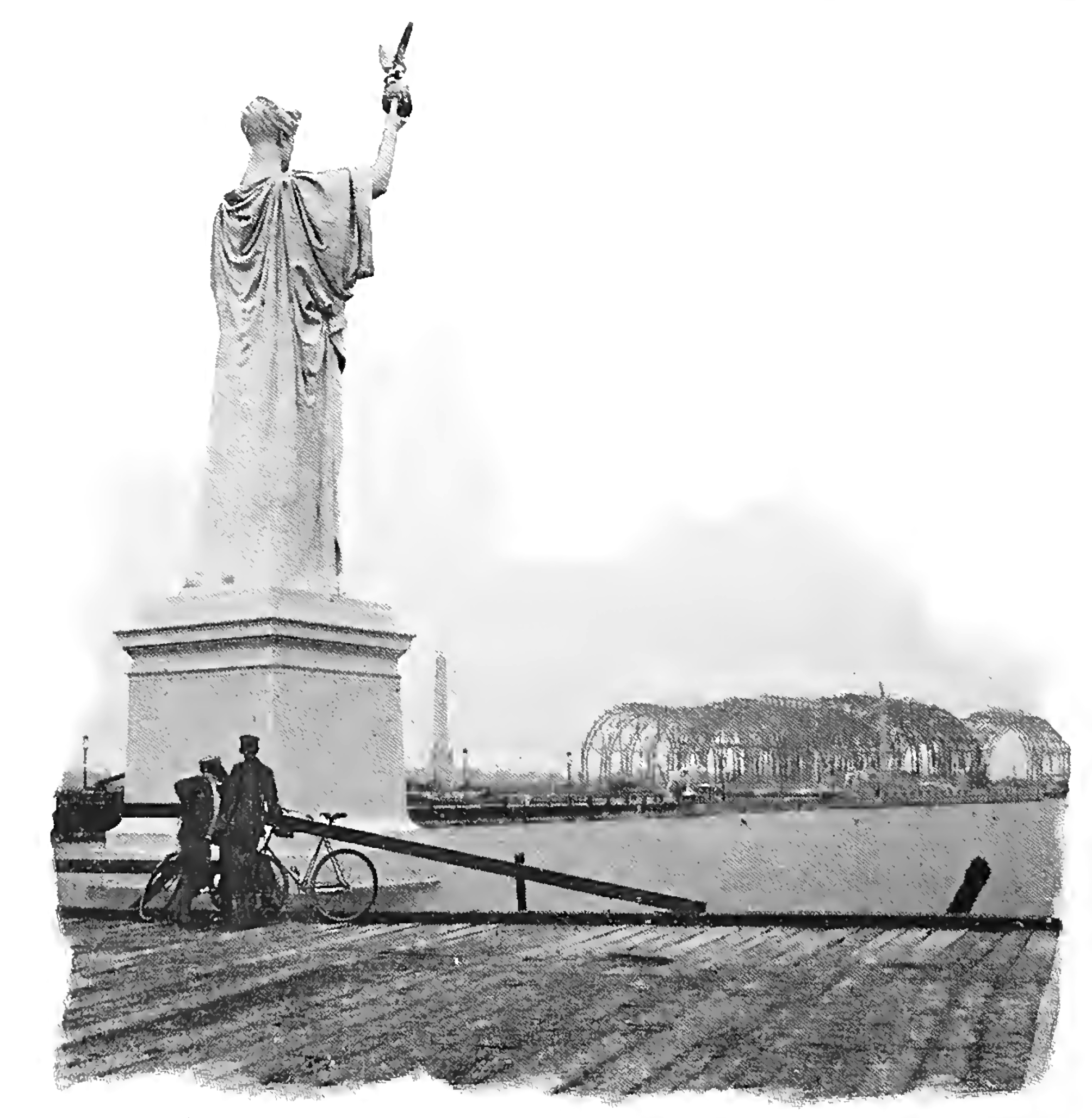 View looking west from east end of Court of Honor, showing-Statue of the Republic, with arches of Machinery Hall and the Obelisk in the distance. 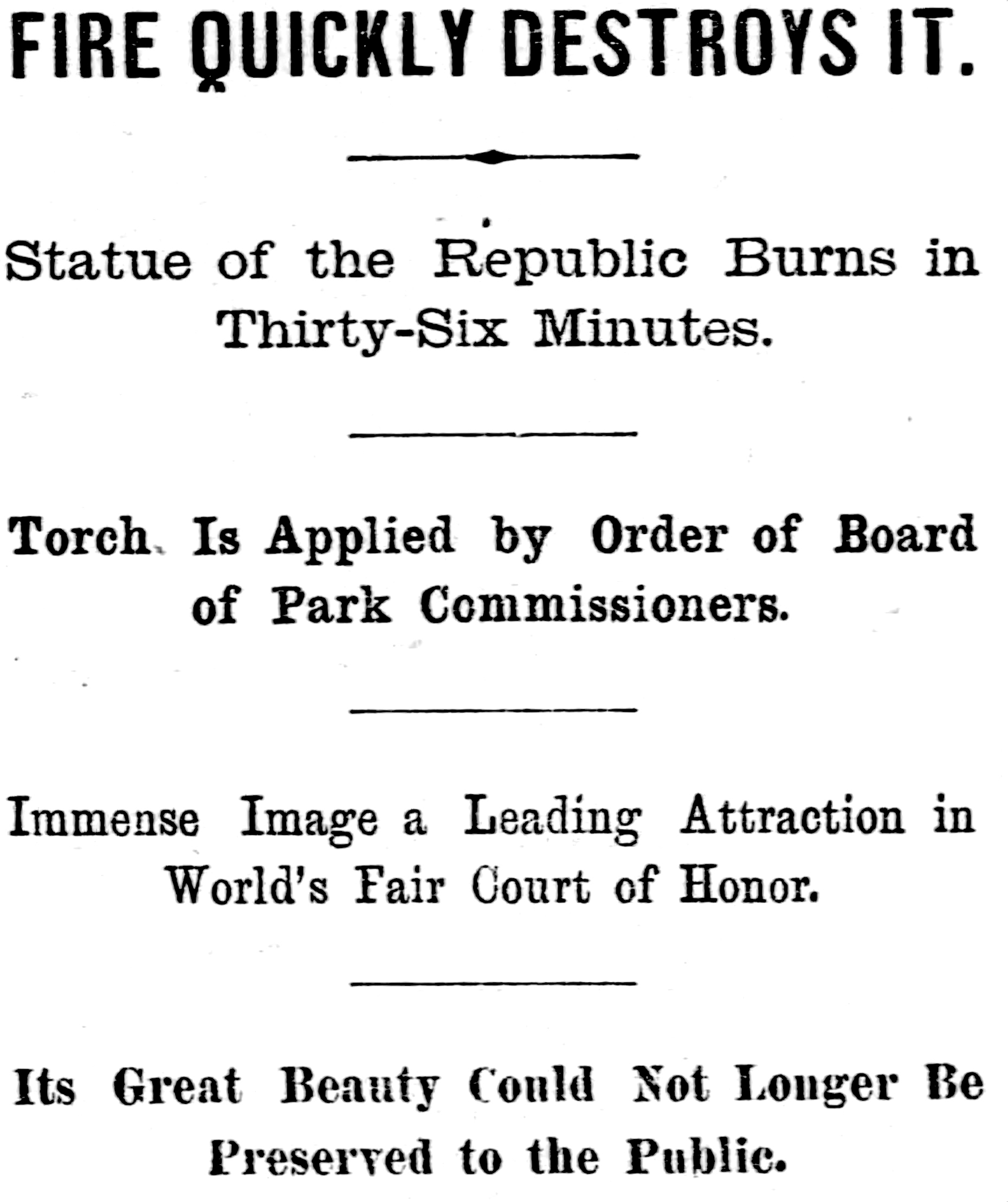 Just as the sun lifted its fiery head above Lake Michigan yesterday morning Mechanical Engineer Wilder of the south park system applied a match to the kerosene-soaked fuses leading to the base of the statue of the republic in Jackson park. Within five minutes the interior of the pile, standing 100 feet above the water in the lagoon. was a mass of flames, and twenty-five minutes later the charred and blackened skeleton of the once beautiful figure toppled and fell into the water.

Several days ago the south park commissioners decided that the last remaining historical design of the Columbian exposition must go, as all efforts to preserve the statue against the weather had proved futile. Park Superintendent Foster was ordered to destroy the statue, and he in turn delegated Mr. Wilder to do the work. It was decided to do so quietly, so as not create any excitement, and the hour of sunrise was chosen.

Late Thursday evening the police and fire departments were notified that in case the wind was favorable the torch would be applied to the statue at 5 o’clock the following morning. Thursday evening park employes carried piles of shavings and other inflammable material into the base of the statue. This was saturated with kerosene oil, and the workmen took their departure.

At dawn yesterday a light breeze was blowing from the west, sufficient to carry the smoke out over the lake, and which was just to the liking of Mr. Wilder. A few minutes before 5 o’clock, accompanied by three assistants, he rowed to the base of the statue. Wilder clambered through the seven-foot door and at once reappeared, carrying in his hand the fuses which were connected with the inflammable pile within. Sprininging into the boat, he applied a match to the fuses. Then he pulled away to the shore and watched the blaze.

The big statue was a mass of frame work, hollow from the base to the top. Acting as a huge smokestack, the draft quickly fanned the flames into a roaring furnace. For a time only the glow of the flames could be seen through the door at the base, but a huge column of smoke rolled from the head and shoulders of the once gilded statue and was carried over the lake, a grand billowy cloud which hid the sun from view.

The fire burned with the roar of a tornado, and in twenty minutes flames had burst through the staff about the head and shoulders, and in just thirty-six minutes from the time the torch was applied the wreck toppled and fell into the water.

Before the statue fell the boulevard surrounding it was lined with bicylcists out for a morning spin. They had seen the huge cloud of smoke and hastened to the scene. One man, all out of breath, gasped that he had thought it a total eclipse of the sun. The debris was cleared away at once and the work of beautifying the lagoon begun. 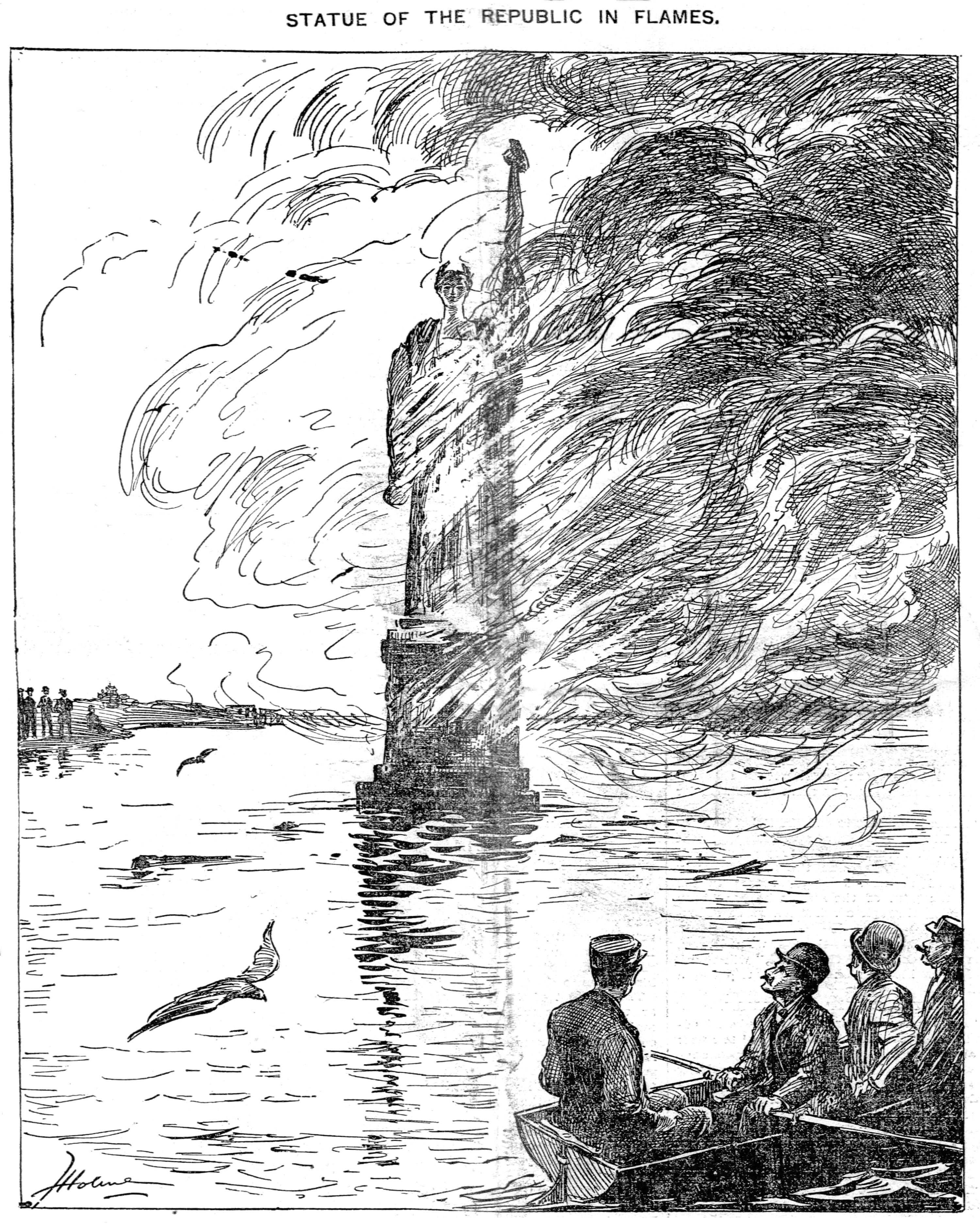