History of The Chicago Fire Department
The first authentic record of any organization in Chicago for protection from fire is a notice, the original of which is still in existence, from the secretary, J. J. Gillupy, of the Washington Volunteer Fire Co., to one of its members for a called meeting, and dated January 8, 1833.

In August of that year Chicago was incorporated as a town, and in November Benj. Jones was appointed fire warden. In September, 1834, an ordinance was adopted by the town board of trustees, by which the town was divided into four wards, and fire wardens for each appointed as follows: First ward, Wm. Worthington; second ward, Ed. E. Hunter; third ward, Samuel Resique; fourth ward, James Kinzie. These wardens were charged with the duty of enforcing the fire ordi nance previously passed, and of directing in their respective wards the operations of the men who re sponded to the alarm of fire. On October 7, 1835, an appropriation for the purchase of some primitive fire apparatus was made, at which time Hiram Hugunin, the president of the town board of trustees, was elected chief of the embryonic fire department. On the same date (October 7, 1835) the Pioneer Hook and Ladder Co. was organized by the principal citizens. 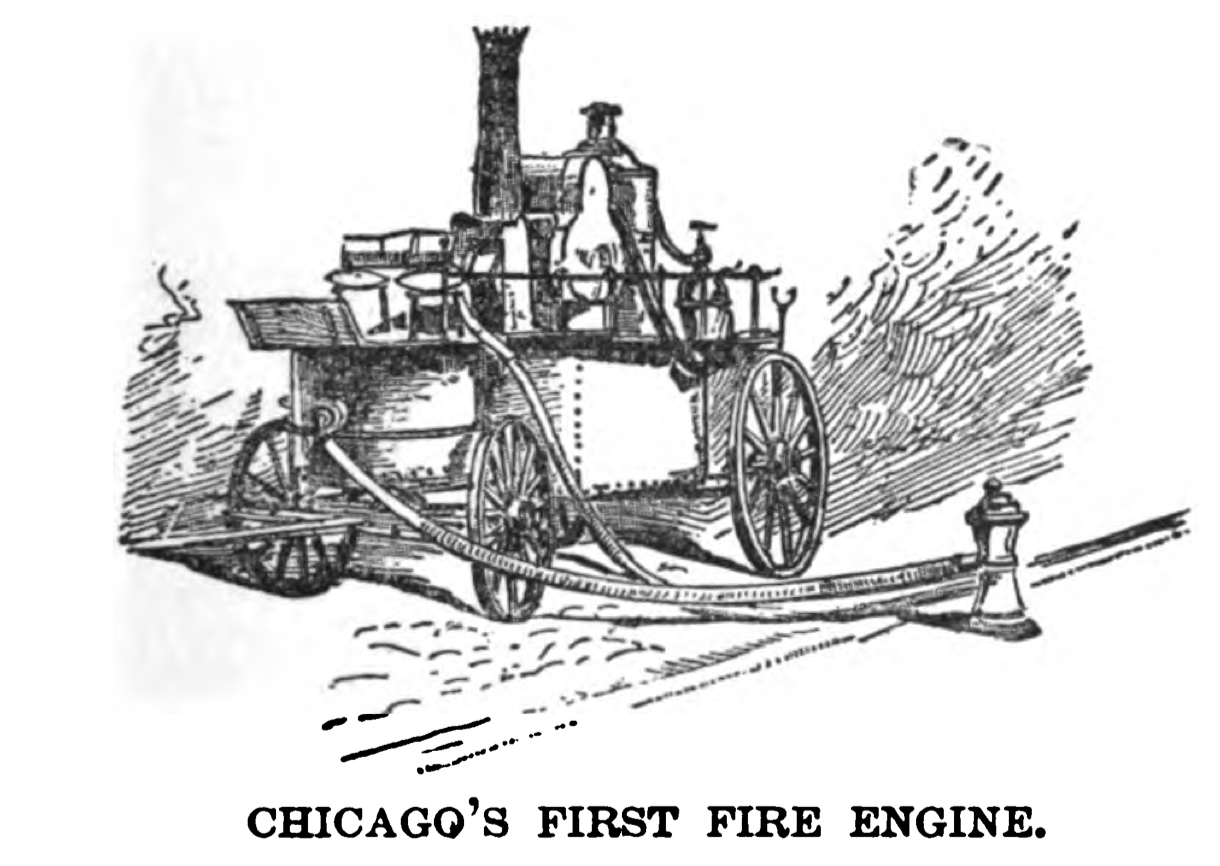 On November 4 following, the town board adopted a lengthy ordinance creating a fire department, with chief engineer, two assistants, four fire wardens (in addition to town trustees, who were ex-officio fire wardens) and “such fire engine men, hose men, hook and ladder men, and ax and saw men as may from time to time be appointed by the board of trustees.” Stringent rules governing the companies which were organized, or might organize, were adopted, and the refusal of any citizen to obey the orders of the chief or his assistants or any of the fire wardens in case of fire, was punishable with a fine of $5.

On December 12, 1835, the first engine company, called “The Fire King,” was organized. The first officers were S. G. Trowbridge, foreman; Alvin Cal houn, assistant foreman; A. D. Hamilton, secretary; H. G. Loomis, treasurer, and Ira Kimberly, steward. About this time Chicago’s first fire engine was pur chased, $894.38 having previously been appropriated for the purpose, payable in two annual installments. Soon after an engine house was built, located in the public square on La Salle street. In February, 1836, Hiram Hugunin, who had acted as chief engineer for about six months, resigned, and Geo. W. Snow was appointed to the position, which he held for one year, and was succeeded by John M. Turner, foreman of Hook and Ladder Co. No. 1. On December 11, 1837, the second engine company was organized as the Tradesmans’, but soon afterward changed to Metamora, No. 2. For convenience, we append, in tabular form, the record of the organization of the various companies composing the fire department until the present paid system displaced the old volunteer organization: 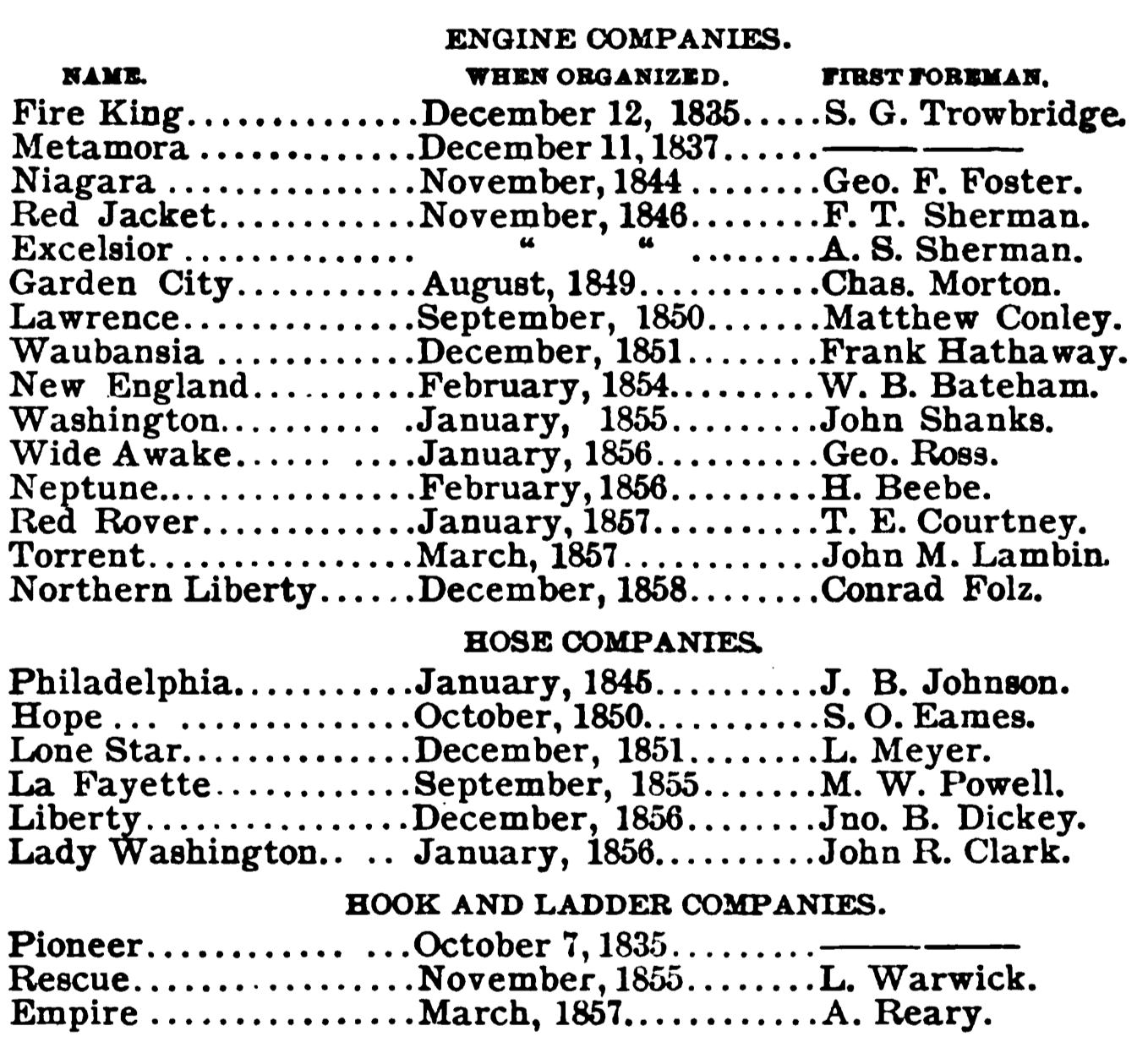 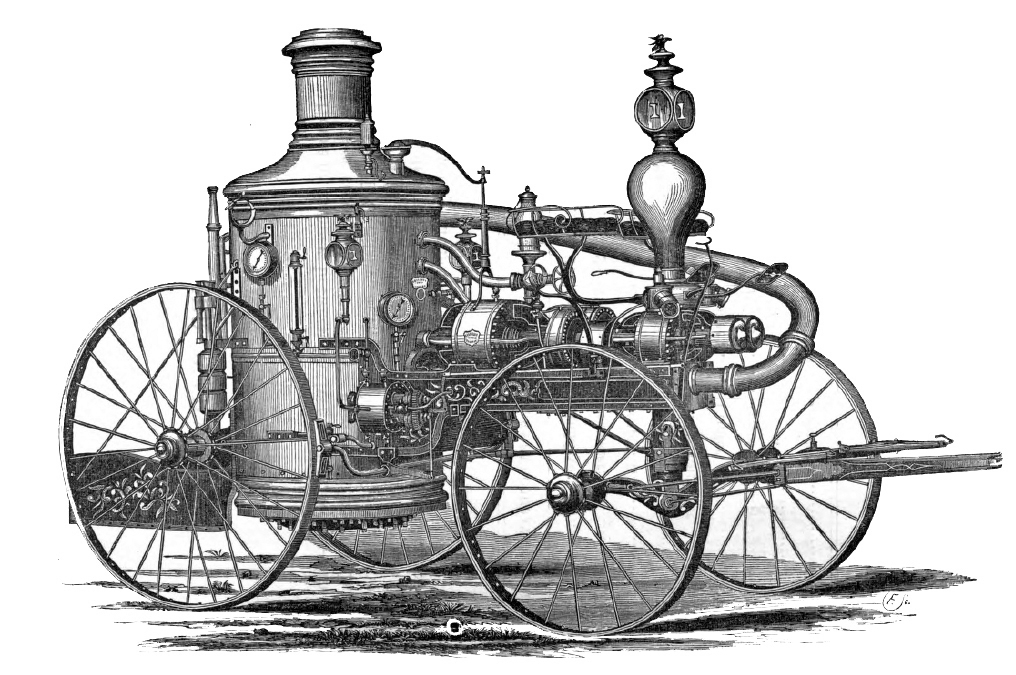 Very soon after the great Water and Lake street fires in October, 1857, the question of having steam fire engines and a paid department began to be agitated, and in February, 1858, the first steamer was purchased, and named “The Long John.” In December of the same year a full company was commissioned by the city authorities to be regularly paid for their services. Gradually additions were made under the paid system, several of the companies reorganizing under the new order of things, but not until the latter part of 1859 were the last of the volunteer organizations disbanded, and the change made complete.

Various improvements were introduced into the department, new companies organized and equipped, the fire alarm telegraph introduced (in 1865), and the department rendered very efficient under the succes sive management of Chief Engineers D. J. Swenie, U.P. Harris and Robert A. Williams, down to 1870-1, at which time the department consisted of seventeen engine companies of nine men each, three hook and lad der companies, six hose companies and one hose eleva tor, the available working force being upwards of 200 men. Of the great fire of 1871, we need not speak here, as it is treated elsewhere in these pages. Among the results of the fire, however, as affecting the fire department, were a more careful organization and stricter discipline of the force, an increased water sup ply and the extension of the fire limits in 1872, within which the erection of frame buildings was forbidden. This ordinance was amended in 1874, making the fire limits, with the above restrictions as to character of buildings, co-extensive with the limits of the city.

In 1875 the board of fire commissioners was abolished and the fire department placed under the direct control of a fire marshal, responsible to the mayor and common council of the city.

On September 1, 1885, the iron tug Alpha was chartered and fitted up as a fire boat, and assigned to duty in the lumber district. The following year this tug was replaced by the purchase of another, which was christened the Chicago, better adapted to the work contemplated, and a new boat, the Geyser, was built by the department, specially adapted for fire duty, which was located at the foot of La Salle street.

In 1890 the Yosemite was added to the fleet and the “Chicago” was transferred to South Chicago.

In 1898 a fourth boat, the Illinois, constructed of steel, was built and placed in service.

CHICAGO FIRE DEPARTMENT.
Shortly after the second great fire in Chicago, which occurred the 14th last July, the National Board Underwriters made per emptory demand for increased means pro tection against such disasters that city. Six general reforms were called for the board, viz., fire limits ordinance; new building law; the complete reorganization the Fire Department, including “the eradication po litical influence and favoritism” therefrom, and “the introduction thorough and efficient military discipline among members,” etc.; increased water supply; Fire Marshal’s Bureau investigate fires and secure the pun ishment incendiaries; and the removal the lumber-yards without the city limits. These demands were made the 24th July, and the Mayor Chicago was notified that the companies represented the board would with draw from that city the 1st October the reforms were not consummated that time. These demands were deemed excessive the city authorities and the Central Committee the Citizens’ Association, while the time allowed for the establishment of such ex tensive reforms was considered inadequate. There was delay planning and organizing, arising from want concert acting the various demands, and the insurance companies finally withdrew.

The situation was critical and embarrassing. The business interests Chicago were seriously threatened. At length, however, the Citizens’ Committee and the local Board of Underwriters invited General SHALER visit Chicago, and examine into all matters pertaining the Fire Department the city. This did. After thorough investigation the organization the department and the various schemes proposed increase its efficiency, General Shaler accepted invitation remove Chicago the capacity Consulting Engineer the Fire Board, yearly salary ten thousand dol lars. General Shaler once entered upon the performance his new duties, and under his efficient management the reorganization the Fire Department and the execution the other reforms demanded the National Board Underwriters were pushed forward with energy and dispatch. Chief Fire Marshal Benner, Mr. Franklin MacVeagh, of the Citizens’ Commit tee, and Mr. George C. Clarke, of the local
Board of Underwriters, whose portraits are given in the engraving on page 1048, co-operate with General Shaler in the work. It would require more space than our limits allow to describe in detail the measures adopted to prevent the occurrence of another serious disaster by fire. Large sums have been expended by the corporation to increase the size of the water-mains, and the city ordinance which made it unlawful to erect wood en houses in certain parts of the city has been amended so as to require that no such structures shall be built any where within the city limits. The capacity of the water-works, of which we give a view in our illustration, has also been creased. Among other measures General Shaler recommends the establishment of a night and day watch and patrol service, the inauguration of a system of drill, the establishment of a repair shop, the employment of floating steamers with strong force-pumps, and that steps be taken to induce owners of elevators, warehouses, and large factories to put in force-pumps, and that hose stations be established near all such places. Besides these municipal measures, many private citizens have spent large amounts of money in improvements designed to protect property against the recurrence of fire calamities. 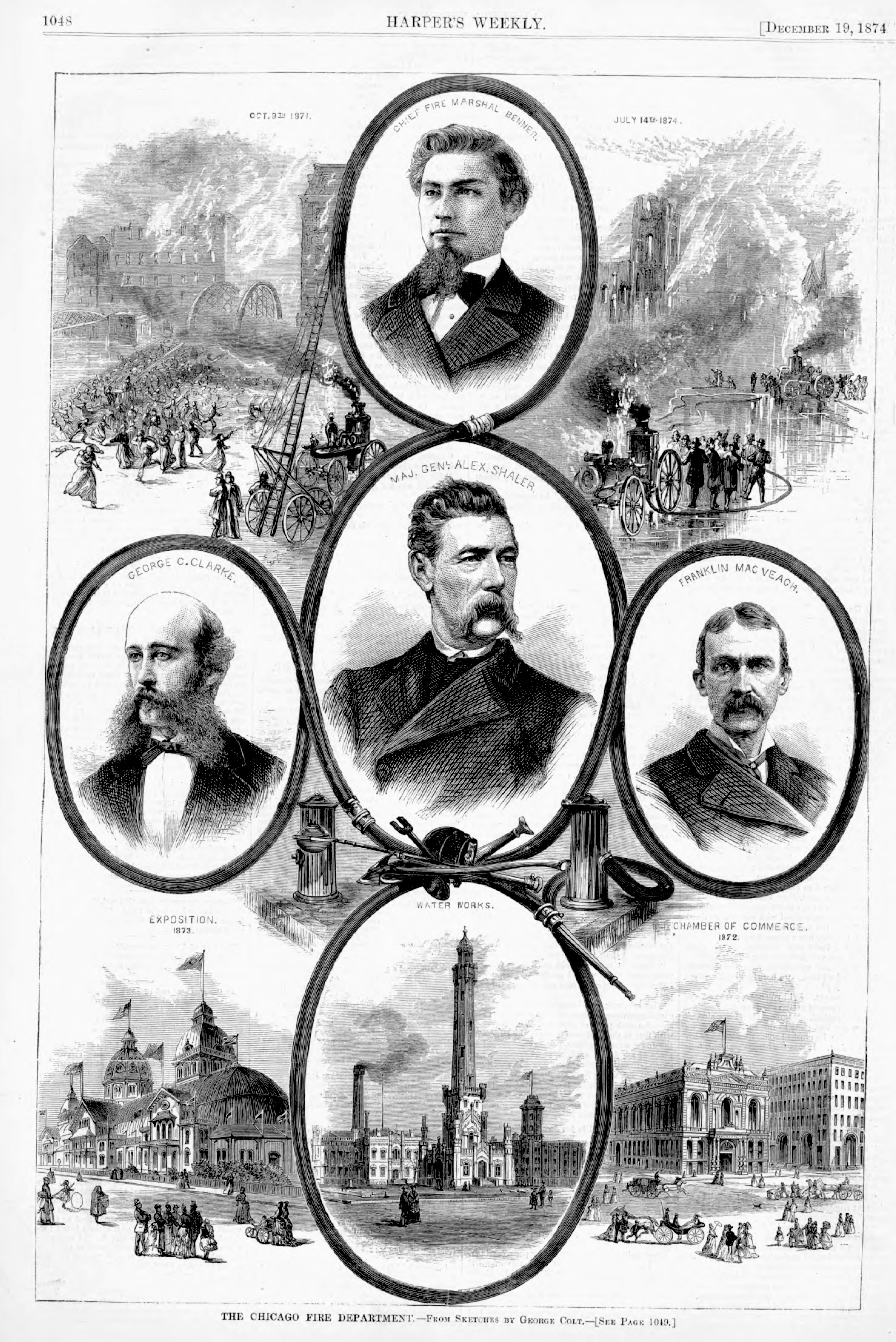 The result of these improvements and reforms, which in all essential particulars conform to the demands of the National Board of Underwriters, is already favorable to Chicago. It is now probable that, on the report of the committee of the board appointed to inspect the improvements, all of the Hartford companies that withdrew some two months ago, except the Phoenix, will resume business there, under careful instructions to agents in the matter of taking risks. Chicago displayed an almost unprecedented recuperative energy; and it would be strange indeed if, wit all her ambition and resources, she should consent to be behind any of her sister cities in matters of of such vital importance to her interests.

THE CHICAGO FIRE DEPARTMENT.
On another page we give illustrations of some of the methods and equipments of the admirable Fire Department of the City of Chicago. An important branch of the service is the Fire-Alarm Telegraph, which has already been described in Frank Leslie’s Illustrated Newspaper. The work of placing its lines underground is progressing rapidly, and is regarded as an important improvement. Including the six stations located in the Stock Yard district, the signal system of the Fire bAlarm proper comprises a 520 stations. In addition to the foregoing, there are 434 Public Police Boxes, any of which may be utilized, though the communication is not direct, the call being received at a police station, thence to the general office over a Joker line, making 948 public stations; with the additional 332 private police boxes, we have 1,286 stations, from which fire assistance may be summoned, that are kept in working order by this Department. In October, 1884, the headquarters of the City Telegraph, were removed from the “old rookery,” which had, since the fire of 1871, furnished but indifferent accommodations to the service, and established in their present quarters in the new City Hall. In these, the conveniences, equipments and furnishings are unsurpassed by those of any similar undertaking in the world, and the facilities for the accomplishment of objects for which the system was organized, complete in every respect. 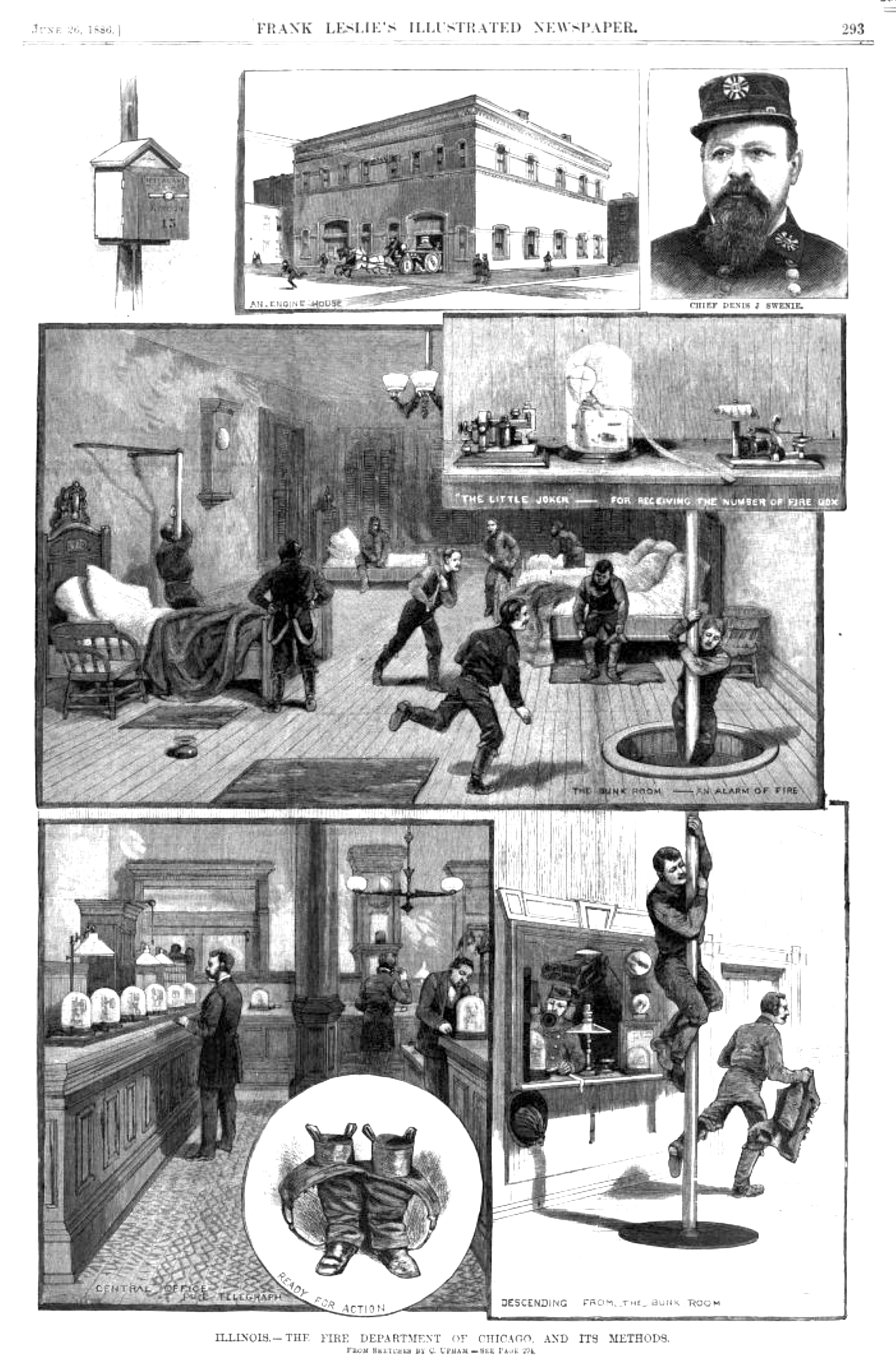 A very high standard of discipline is maintained, and the quarterly inspection of drill shows that the members are perfectly proficient in their several duties, while a first-rate progress has been made in the French drill. The Department embraces thirty-five engine companies, ten hook-and-ladder companies, and three chemical engine companies, with an ample force of marshals, inspectors, {unreadable text}.