The header represents the burning of the marble front block on Lake street, west of Franklin street, On August 19, 1866. The fire was an obstinate one. It originated in stores on Water street, and burned through to Lake, and presented difficulties of no ordinary character. The Fire Department, however, was equal to the work; they confined the destruction to the premises actually on fire when they reached the scene. 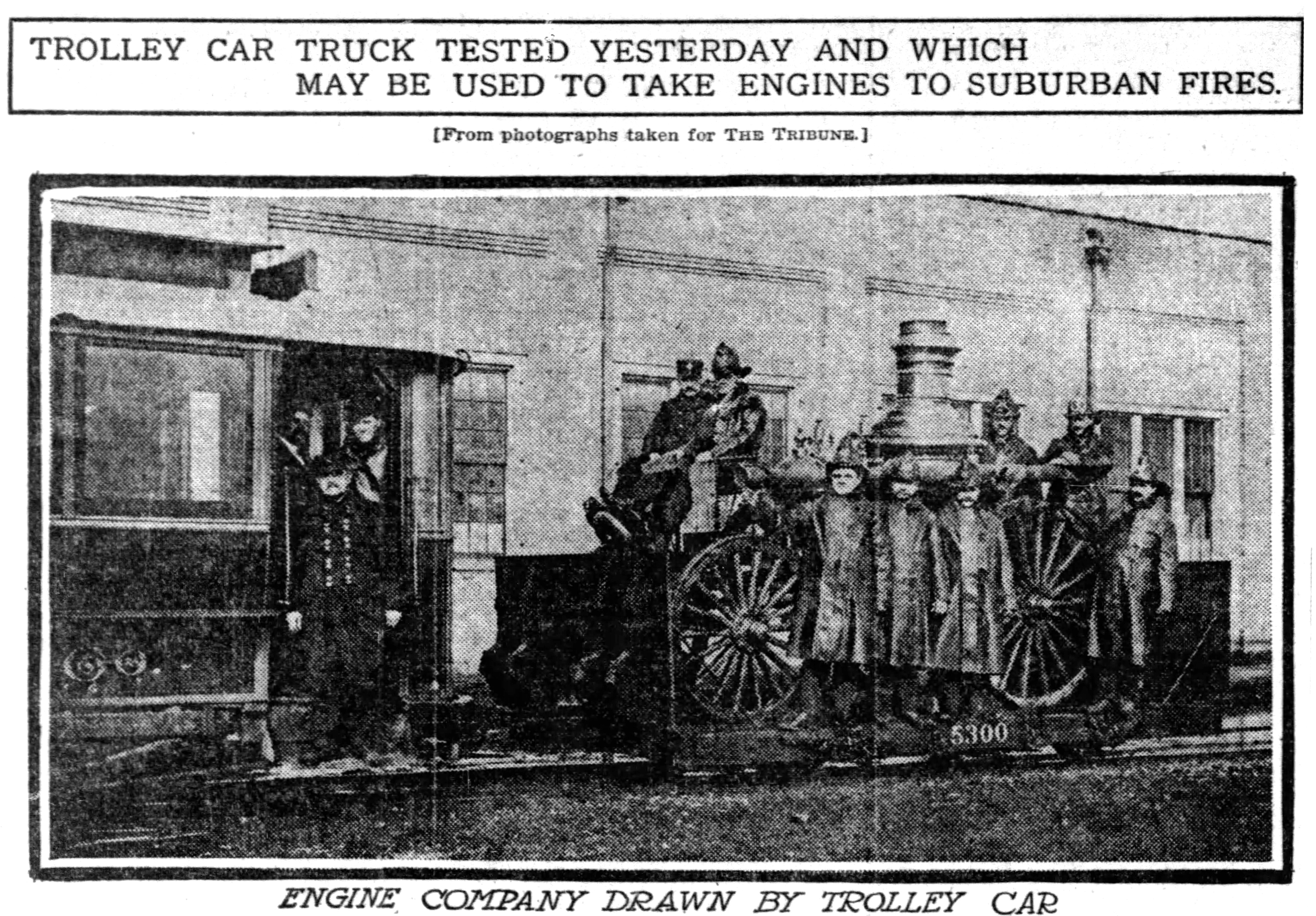 A street car truck, by means of which it is proposed to transport fire engines to distant points at a high rate of speed was tested yesterday afternoon in the presence of Assistant Fire Marshall Horan and Battalion Chief Kenyon. It was suggested that such trucks be used in answering alarms in Kensington, West Pullman, South Chicago, and Irondale. The test was made at Seventy-seventh street and Wentworth avenue.

The platform of the truck is eighteen inches from the ground. Then the gates are lifted and assist in holding the engine in place. The truck is then attached to a trolley car and ready for the first run to the fire.

The firemen expressed themselves as being pleased with the working of the truck. The City railway company, which built the truck, is now building another for a hose cart. 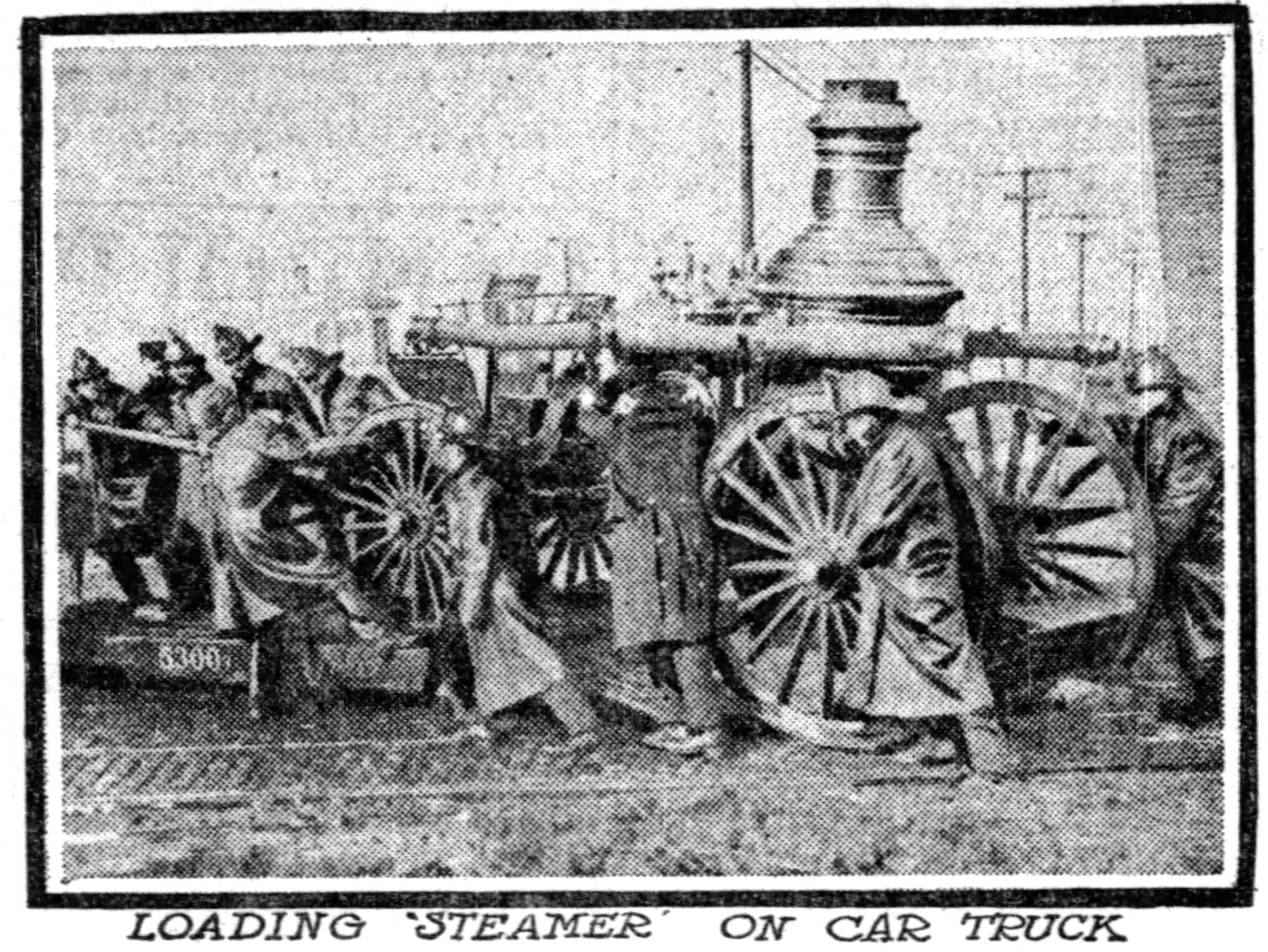 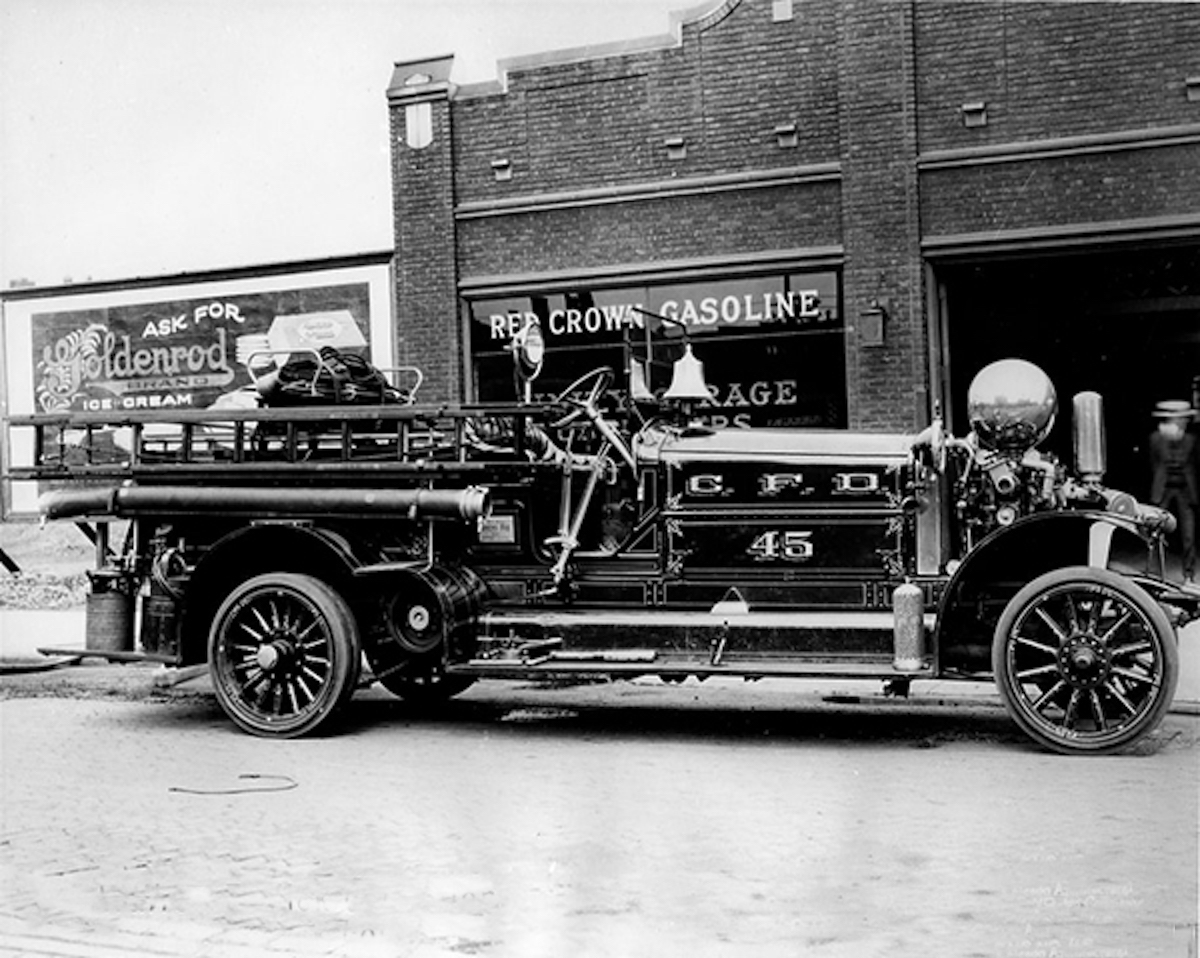 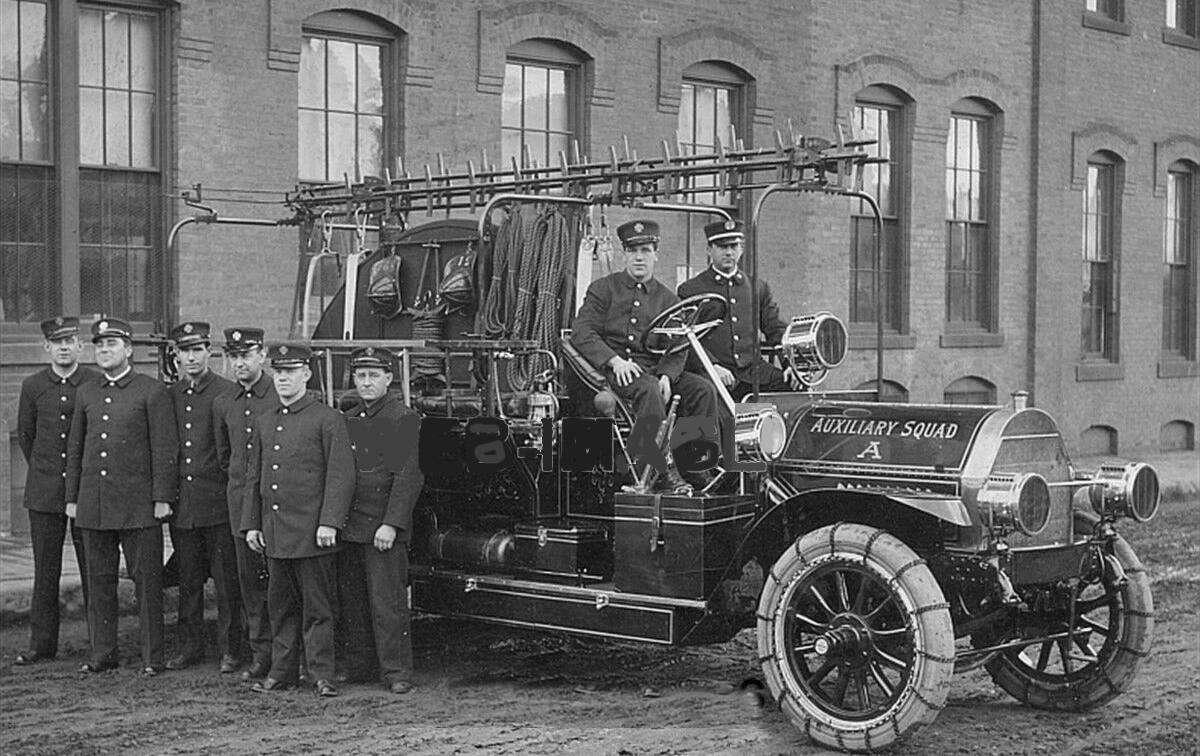 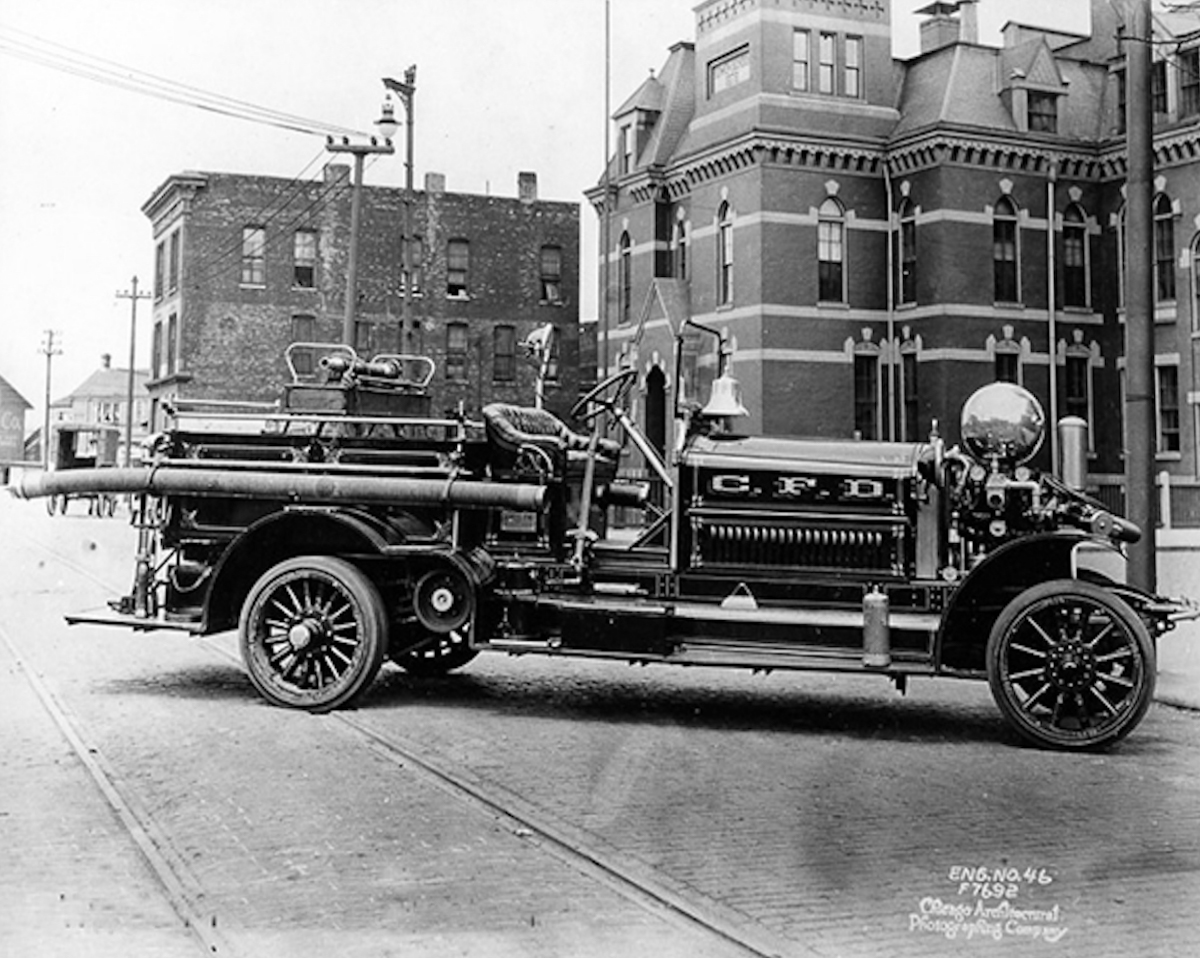 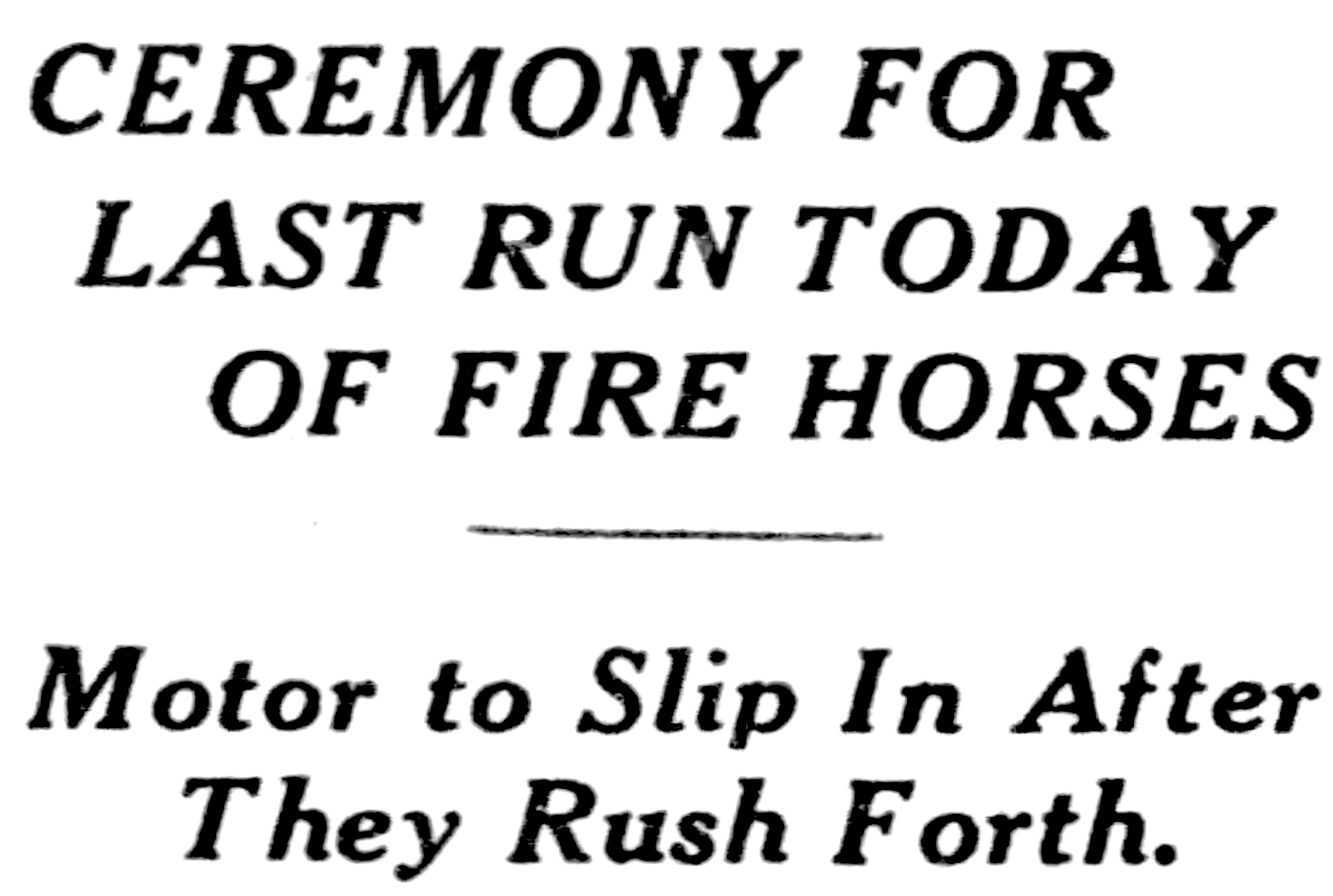 Today will be a memorable one in the history of Chicago’s fire department. It will mark the passing of the last fire engine horses and the last horse drawn equipment. The department will become 100 per cent motorized.

At 1:30 o’clock, amis appropriate ceremonies, Buck, Teddy, Beauty, and Dan, drawing a fire engine a hose cart, will dash from the house of engine company No. 11 at 10 E. Grand avenue in answer to their last alarm, and when they return they will be without a home. During their absence a new, shiny motor truck will have usurped their place.

The ceremonies will begin shortly before noon, when the mayor, the aldermen, city officials, several hundred firemen with the department band and the fire fans of three generations will assemble at city hall and parade to the fire engine house.

At 12:30 firebox No. 848 at Chicago avenue and State street will be pulled and the old equipment will answer the alarm. The alarm will prove to be a false one and Buck, Teddy, Beauty and Dan will go out to the stables at the house of correction to be sold at auction.

Motorization of the fire department began in 1917 under the direction of John F. Cullerton, then business manager, and has resulted in the savings of millions of dollars to property owners and taxpayers of the city. The department now has nearly 250 pieces of motor equipment.

The motorizing of the Chicago fire department cost something more than $1,000,000, but it is saving the taxpayers nearly half a million a year, to say nothing of the saving in fire losses.

Mr. Cullerton pointed out that operation of the motor equipment had made it possible for the department to be operated under the double platoon system, where firemen work twenty-four hours and are off twenty-four hours, without an increase in personnel. With horse drawn equipment each engine house had three men, an engineer to operate the engine, and two drivers, one for the engine and one for the hose cart, who were now available for actual fire fighting duty,

With motor engines this work is all done by one man. He operated the truck and then tends to the motor while it is pumping water. The department now has 126 pumping engines, 37 hook and ladder trucks, 10 squad wagons, 2 high powered pressure pumping wagons, 60 automobiles for fire marshals and battalion chiefs, and 2 wreck, service and gas tank wagons. 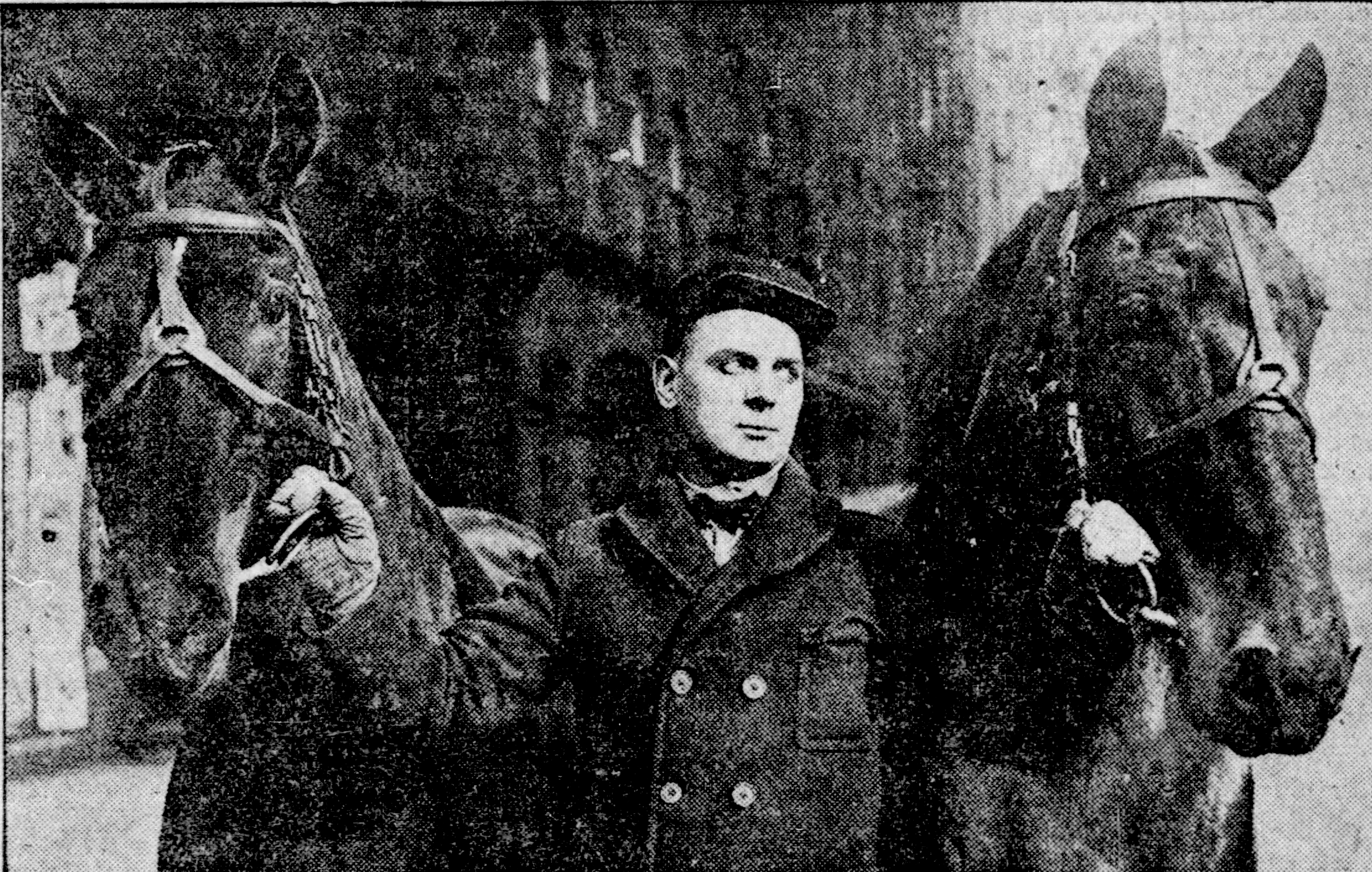 PASS INTO HISTORY. Buck and Beauty, with their driver, Fireman Luedtke, of Engine Company No. 10 of Austin avenue, who make their last run today. They are the last of the city’s fire horses to be superceded by motor apparatus.