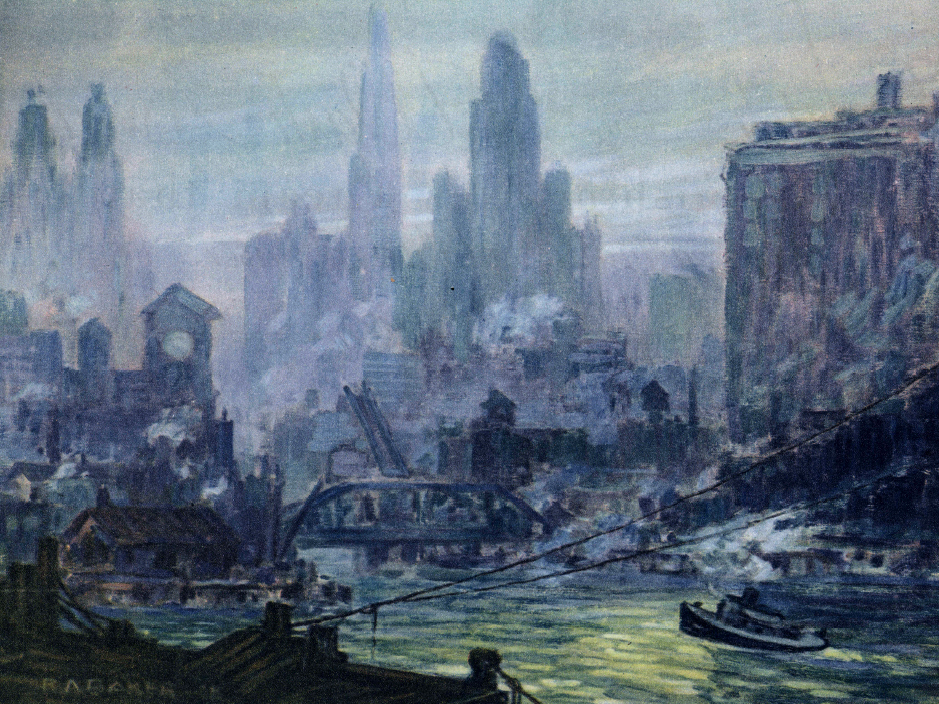 “MORNING MYSTERY” by R. A. Baker.
This painting of the Chicago river at Wacker drive, looking up and outward to the east and north and taking in the superb lines of Tribune Tower, was shown in the thirty-second annual exhibition by artists of Chicago and vicinity. held recently at the Chicago Art institute.
Chicago Sunday Tribune
May 13, 1928

Frances Chapin
Francis Chapin is another standout – a resident of Chicago from 1925 until his death in 1965. A graduate of the Art Institute, he later taught there for many years and kept a studio in Old Town. Focusing on the contrast between urban and rural communities, he maintained that small-town aspects remained alive and well in the big city. His depictions of the city generally contained vibrant colors and human activity, championing the virtues of human community against the cold steel of the adjacent skyscrapers. Well aware of the reality of his surroundings, Chapin remained a proponent of the Midwest and its encompassing values even though the city center was expanding and modernizing all it touched. 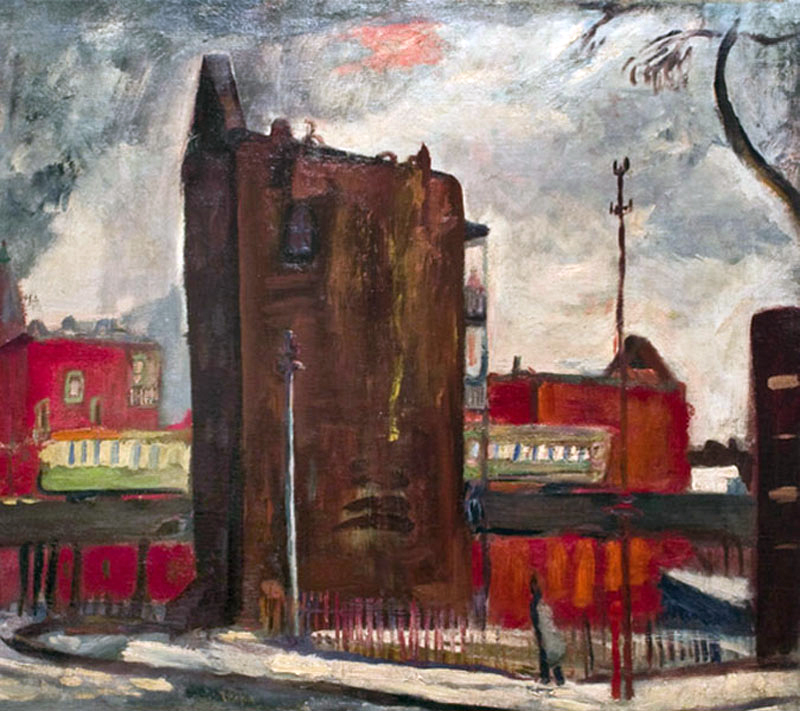 Frances Chapin
“By the El Tracks”

Jean Crawford Adams (1884 – 1972)
Jean Crawford Adams was born in Chicago in 1884. She studied at the Art Institute of Chicago with Charles Hawthorne and George Bellows. In 1914, she won an Honorable Mention in portraiture. She also studied in Paris under Andre L’Hote, where she developed a unique Fauvist and Cubist style of painting, which she applied to her American landscapes and images of Chicago. She painted both abroad and throughout the United States. In Chicago, she was represented by Chester Johnson Galleries. While in Chicago in the 1930s, she also worked with the Federal Art Project of Franklin Roosevelt’s Works Progress Administration (WPA). Adams works were included in the notable annual exhibitions of the Pennsylvania Academy of Fine Arts, the Carnegie Institute, the Detroit Museum, and the Art Institute of Chicago. During her artistic career, she exhibited 50 works of art at the prestigious Annual Exhibitions at the Art Institute of Chicago between 1915 and 1948. Adams work is best recognized for its vibrant color and fluid brushwork. The artist died in 1972 at the age of 86. 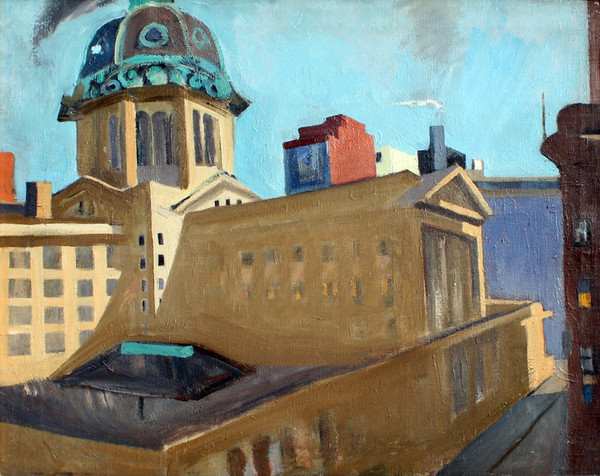 Carl C. Preussl (1894 – 1951)
Carl Conrad Preussl was born in Nurnberg, Germany in 1894. In 1914, he emigrated to America with his parents and the family settled in Chicago. After serving with the Allied forces in WWI, Preussl worked as an artist at the S & W Art Service in the Reliable Building in Chicago. He began exhibiting at the Art Institute of Chicago in 1924. Preussl exhibited 23 times at the Art Institute between 1924 and 1934, winning the Eisendrath Prize for a Chicago scene in 1926. He won a prize at the Chicago Galleries Association exhibition in 1928. That year, he also exhibited at the Pennsylvania Academy. The painting “Our City” was prominently featured in a notable Chicago Galleries Association show called “8 Chicago Painters”, which ran from March 1 to March 25, 1930. The show also featured such early, important Chicago painters as Rudolph Ingerle, E. Martin Hennings, Frederic Tellander and J. Jeffrey Grant. “Our City” was illustrated in the exhibition catalogue.

Examples of Preussl’s work can be found in the collections of the Buffalo Bill Historical Society in Cody, Wyoming and the Illinois State Museum in Chicago. The painting in the Illinois State Museum’s collection is a similar, though smaller, painting entitled “The City”. That painting currently resides in the office of Governor of the State of Illinois. Preussl is best known for his magnificent and grand views of Chicago painted during the ‘Roaring Twenties’. As demonstrated in the large, dynamic canvas “Our City”, Preussl’s work exemplifies the spirit of the ‘City of Big Shoulders’. Preussl died in Chicago in 1951. 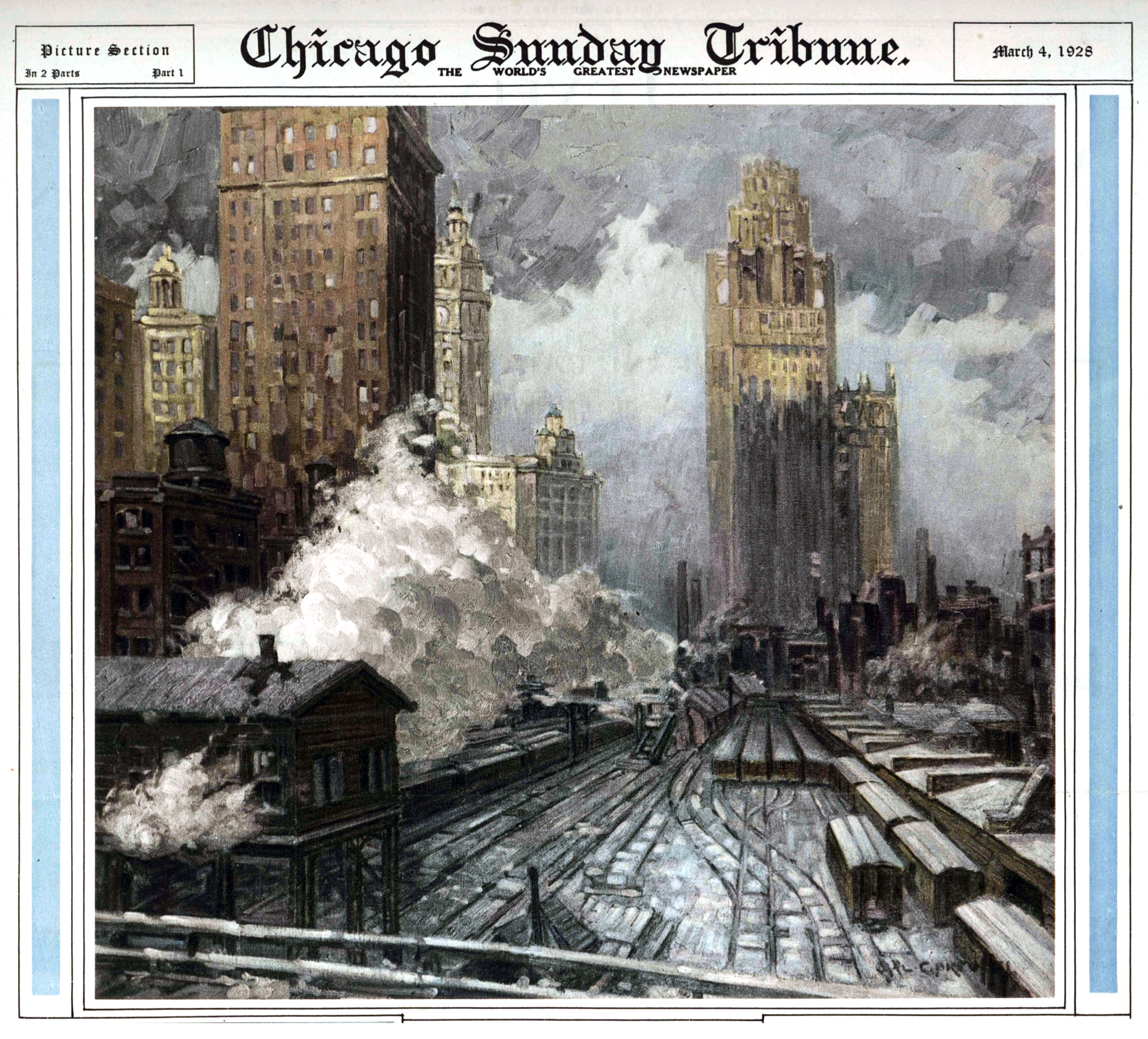 “LOOKING NORTH,” by Carl C. Preussl, a young Chicagoan famous for the beauty of his paintings of foreign scenes, pictures Randolph street, at Grant park. It shows the Illinois Central tracks and on up toward Tribune Tower, with the Tower dominating the picture at the right. The painting was awarded the Joseph Eisendrath prize two years ago at the Chicago Artists’ exhibition in the Art institute here.