Chicago Artists in the 20th Century

When her father died in 1910, she was raised by her mother and grandmother, who were both devoted Christian Scientists.

After she graduated high school she studied fashion design at the Chicago Academy of Fine Arts from 1921-23, but failed to graduate.

She got her first professional job in 1925 drawing pen & ink designs for the local fashion industry.

This phrase appeared on the door of the historic Dil(l) Pickle Club, a social club founded in 1914, which moved into its club space on Tooker Alley off Dearborn Street in 1915. The official address was 858 N. State Street. The club was known as a gathering place for those who wanted to express themselves by openly and candidly discussing the day’s controversial topics. The original club closed in 1934, but a new incarnation of the Dill Pickle Club has since been founded. The Dil Pickle Club, The Bug Club, various Hobo Colleges, IWW meetings, Bughouse Square, and College of Complexes, were among Chicago’s most noted free-speech forums. Emma Goldman, Upton Sinclair, Carl Sandburg, F. Scott Fitzgerald, and Ben Reitman were among the club’s famous clientele, but one would also find hobos and prostitutes in the mix.

In 1927 she married “Slim” Brundage. They had one son, Kerlynn Brundage. They lived at 3318 Maypoll Avenue. Her husband was an alcoholic. He was often absent, so her mother lived with them and helped to keep house and raise Kerlynn.

Her first pulp cover was for the September 1932 Oriental Stories. Brundage went on to create covers for other magazines produced by the same publisher, Popular Fiction Publishing, including The Magic Carpet and most famously for Weird Tales.

Brundage sold 66 original pulp cover illustrations to Weird Tales from 1933 to 1945. Her work often featured fantasy scenes of women trapped in sexually vulnerable situations. Brundage covers were very popular with the readers of Weird Tales, but most of the public was not aware of the artist’s gender, because her work was usually signed “M. Brundage.” When puritanical social forces complained about the overt sexuality of Weird Tales cover art, the editor finally revealed that the artist was a woman, hoping to mollify the perceived offensiveness of her work.

Aside from the remarkable aesthetic of her approach to pulp art, and the rarity of her being a woman in a field that was almost entirely composed of men, Brundage was also unique in the fact that most of her work is created with pastel on illustration board.

After the publishers of Weird Tales moved to NYC in 1938, Brundage continued to create fantasy scenes in pastel for the rest of her life, but she was never again able to find a steady publisher for her work.

After twelve years of tolerating her husband’s drunkenness and neglect she was granted a divorce in 1939. Her mother died in 1940.

Her later years were spent in relative poverty. Her son died in 1972. Margaret Brundage died at age seventy-five on April 9, 1976.

Weird Tales first appeared with it’s March 1923 issue. But it was far from an immediate success. Publishers Jacob Clark Henneberger and J.M. Lassinger formed Rural Publications & hired newsman Edwin Baird to edit the magazine. But Baird proved to be a bad choice as editor & was replaced by Farnsworth Wright who had previously been first reader for the foundering publication, after author H.P.Lovecraft refused to move to Chicago and take over the helm of the pulp title.

Farnsworth Wright’s stewardship of Weird Tales slowly but surely led the maagzine into profitablity. His keen understanding of the medium allowed him to seek & find such famous fantasy authors as Lovecraft, Otis Adelbert Kline (who had also served as first reader), Tennesee Williams, Robert E. Howard, Seabury Quinn & a host of other top fantasy talents. The title almost ceased in 1930 when the publisher’s lending bank was closed by the woes of the depression. But a few months of difficulty was soon forgotten.

At the same time that Weird Tales was first appearing on the news stand, another publisher was about to make an equally important move that would impact strongly on the pulp magazine. 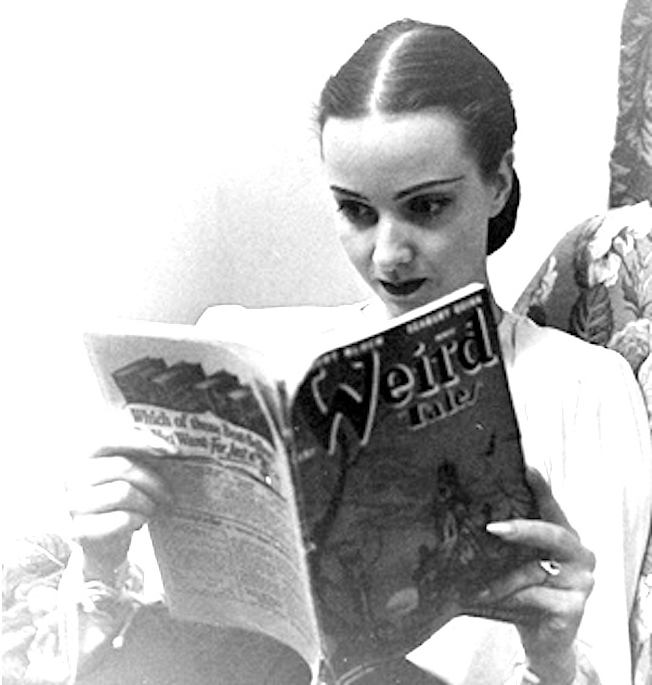 Weird Tales never had a large circulation and often struggled to make a profit. In the late 1930s Weird Tales faced additional challenges. Howard, whose tales of Conan, Kull, Solomon Kane, and Bran Mak More were a major selling point for subscribers, killed himself in 1936. Lovecraft died a year later. Howard’s death was a bigger blow to the magazine as Lovecraft had left behind such a stock of manuscripts that Weird Tales ended up publishing more of his work posthumously than when he was alive.

Between 1938 and 1940, Weird Tales underwent a series of format changes, expanding from 144 pages to 160 in an effort to court new subscribers and then dropping to 128 pages and slashing the cover price from twenty five to fifteen cents. In January 1940 the magazine switched from a monthly to a bi-monthly schedule. In the 1940s and 1950s McIlwraith published stories by Fritz Leiber, Ray Bradbury, and Theodore Sturgeon. The magazine continued to struggle financially, however; and near the end of the original run of 279 issues, page counts began to drop as cover prices rose. The final issue was published in September 1954.

In successive years, Weird Tales would earn the moniker, The Magazine That Never Dies. It was revived briefly in 1973-74 under the editorship of Sam Moskowitz, and again in 1984-5 under Gordan M. D. Garb. A more successful revival began in 1988, when Weird Tales was reborn yet again as a quarterly publication, edited by Darrell Schweitzer in collaboration with George H. Scithers and John Betancourt. In 2007 Ann VanderMeer became editor, during which time Weird Tales was nominated for three Hugo awards, winning one. In 2011 Nth Dimension Media purchased the magazine. Marvin Kaye will take over as editor early in 2012. 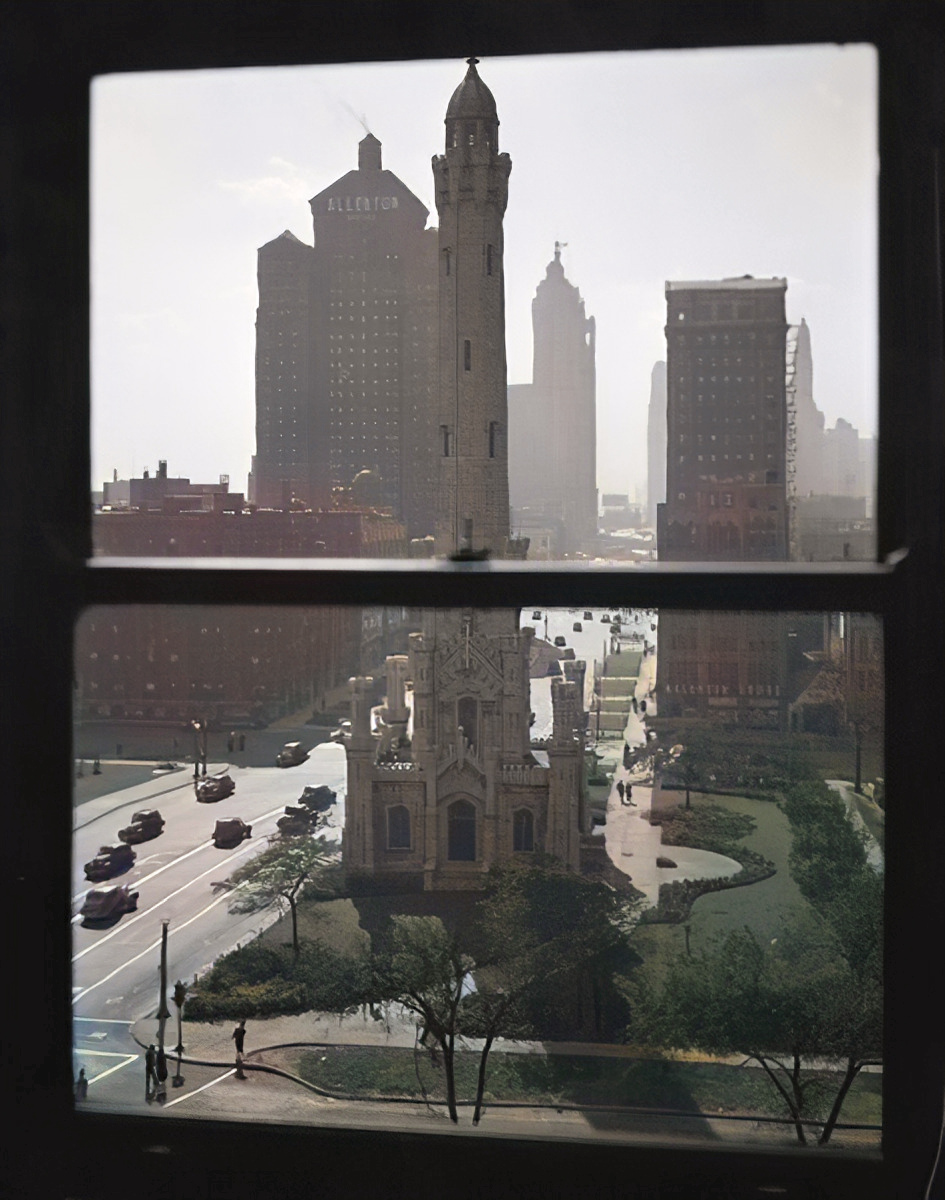 Colorized view from what is believed to be the Weird Science editorial office, 840 N. Michigan building, in 1937. 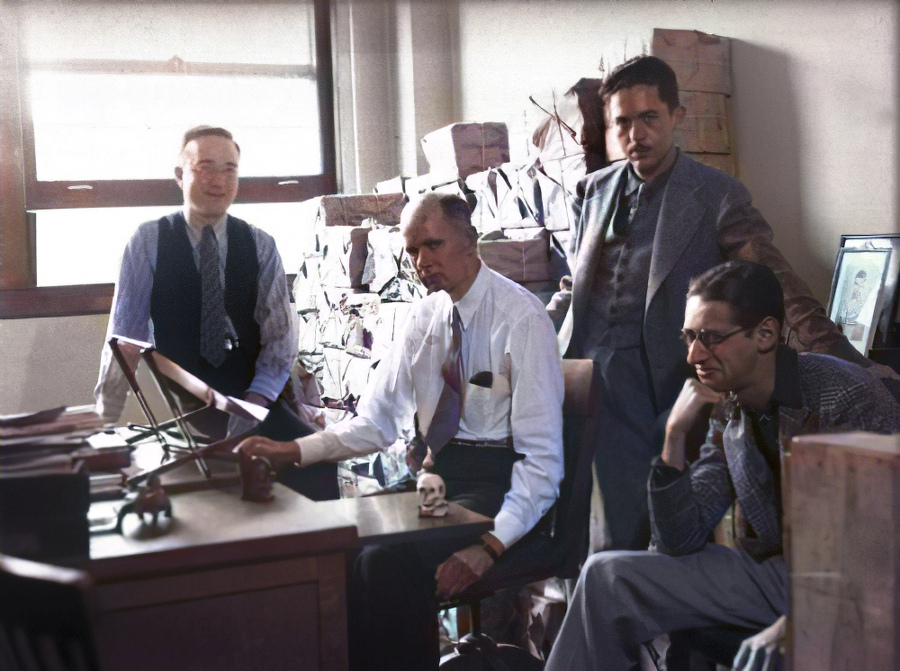