Hollywood, Cal.,
THE NIGHT that “Snow White and the Seven Dwarfs” had its world première at the Cathay Circle, here in Hollywood, Walt Disney sat with his wife, an Idaho girl, in the last orchestra row. The Chicago-boy-who-made-good had just seen his most pretentious effort on the screen, his first full-length animated feature, budgeted at $1,500,000. The opening had been the most brilliant of the season with the great stars of the industry donning white ties for the occasion. When the biggies drape themselves in tails out here the affair must be important, for this is a town which rarely dresses.

In front of the Cathay Circle thousands of moving picture fans had sat on grandstand benches for hours, waiting the arrival of the Gables and Lombards, the Spencer Tracys, the Jack Bennys, Shirley Temple, Doug Fairbanks Jr., and Marlene Dietrich, Loretta Young, Kay Francis, Fernand Gravet, Katharine Hepburn and all the other constellations that brighten the celluloid skies.

As I sat there that night, I was thinking back to August, 1923, when my brother Roy and myself had just arrived in Hollywood. We rented a back room in a house on Vermont avenue and Hollywood for $6.25 a week, and when the landlord told us what the rate was we excused ourselves and went out in the street to figure out if we could afford $25 for the month. Sitting in the Carthay Circle, on the of the opening, believe me, Ed, I did plenty of thinking.

I arrived in Hollywood fourteen years ago with $40 in cash, one suit of clothes that was getting a bit frayed at the edges, a sweater and some drawing materials. Things were so tough, in a financial way, that Roy and I used to eat in a cafeteria and budget our orders. I’d order roast beef; Roy would order vegetables and one order of bread and butter. Then we’d go back to the table and I’d take half his vegetables and he’d take half my roast beef. We’d divide the three slices of bread evenly. I guess that’s why today I always insist on having a lot of bread on the table. When our money started running lower and lower we’d buy food and cook it in the back room.

The progress of Disney from a $6.25-a-week back room to the Carthay Circle première of “Snow White,” to me is one of the grandest success stories of Hollywood. Certainly it should serve as a personal document of encouragement to every kid in the midwest. In fact, the boys from the Chicago area have an abundance of inspiration at the moment, with Disney and Edgar Bergen, both of Chicago, sitting on top of the world, and with Charlies McCarthy, fashioned in a Chicago woodworker’s shop, sitting in Bergen’s lap. 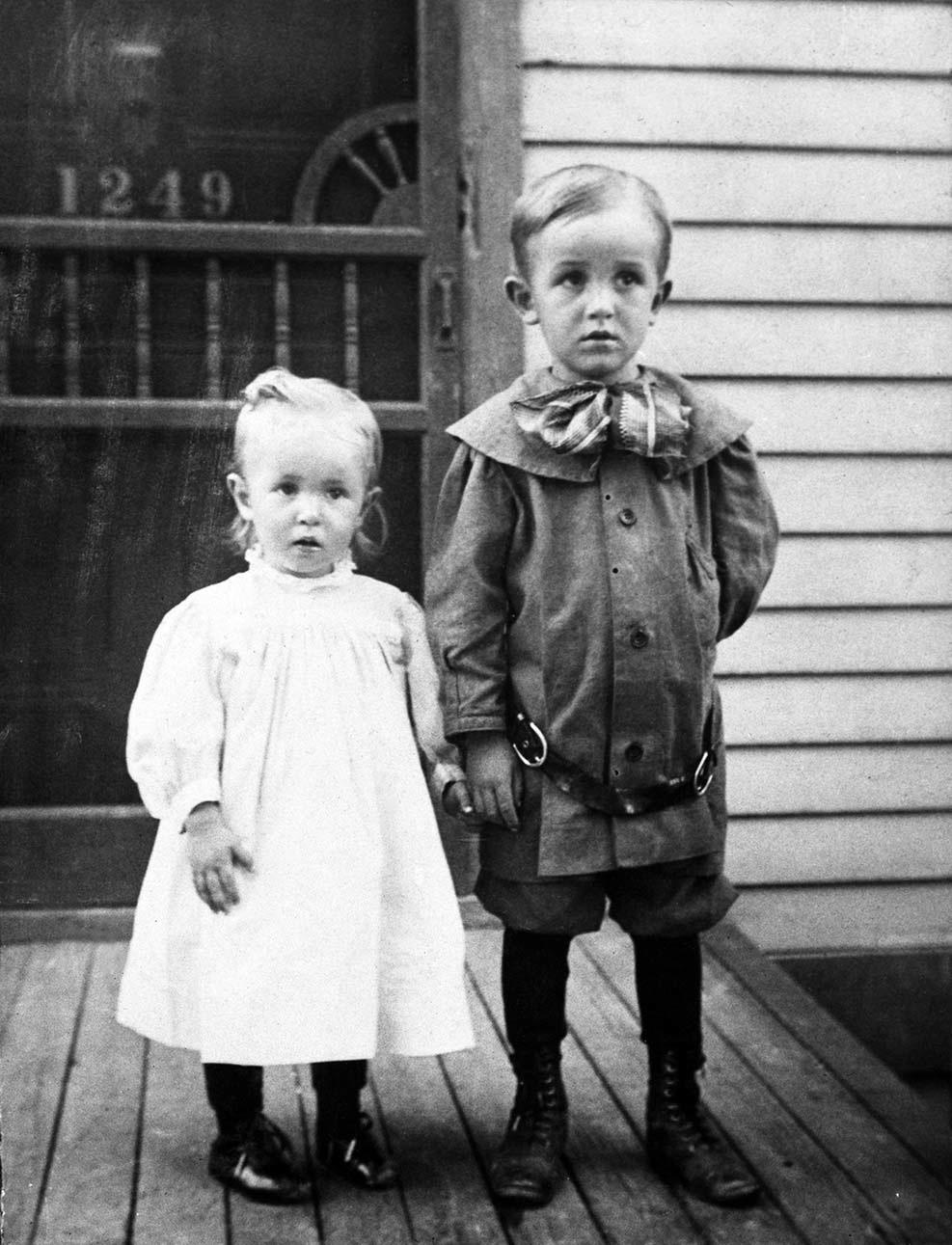 The reason that Disney’s success story is exciting is that this 36 year old midwesterner is a creator. There are men, gifted with financial acumen, who make fortunes by shrewdly exploiting and promoting the talents of other men. Disney created his own fame, out if his own talent and application and courage. That is an achievement that is worth while. And the enjoyment he has brought to millions of people is a tonic that even a Pasteur might envy.

Curiously enough, Disney is the only successful person in Hollywood whose name is not belitteled or begrudged. That is the most genuine compliment of all. The industry feels, as one man, that he has contributed mightily to it.

Disney himself can’t explain how he happened to be an artist. Like Topsy, his talent “just growed.” His father was Elias Whitney, an Irish-Canadian contractor in Chicago, his mother was Flora Call, of German-American descent. Perhaps the emerald vales of Erin, or the plains of Canada or the Black Forest of Germany handed down the talent from some ancestor so far removed that his family had no record of it. His three brothers and a sister had no instinct for drawing, but the first house that he remembers, on Milwaukee avenue, in Chicago, was defaced with his juvenile attempts at making pictures. Later at McKinley High school and at the Academy of Fine Arts he was to discipline this inclination.

Above and beyond that instinct for drawing was his inborn sense of fantasy and whimsy. You get an insight into the quality that made him most successful by a flash-back to the Kansas City officr where he discovered the prototype of Mickey Mouse, the little rodent which carried his master to all the capitals of the world.

That incident has been so garbled that at times I’ve been made to appear a half-wit. I always liked animals, guess every kid does. In the Kansas City office where I worked there were a lot of mice. They made their home in the desk drawers and they were so tiny and cute all of us used to bring back crumbs and cheese for them to eat. I had quite a collection of them, and a few became so tame that they’d sit on my drawing board while I worked, scurrying to cover when somebody came in the room.

When I left Kansas City for Hollywood the problem was to dispose of the little things. I got them all into a box and went out to a vacant lot in the neighborhood and turned them loose. To this day, Ed, I’ll never forget the queer emotion as those little mice just stood there, looking at me. You see, they figured I was their friend, and they didn’t want to go away. Two of them came back and jumped into the box, and I finally had to shoo them away to make them go.

That’s the real story. Other stories have been written about my mice that made it appear I was eccentric or a nut. It just happened I liked them and it only proves that any animal will respond to kindness.

There, I think, you have the complete secret of Disney’s success. The Mickey Mouse and Minnie Mouse he brought to the screen were drawn affectionately. Wait until you see the little creatures of the forest in “Snow White” and you’ll understand his vast affection for animals of all sorts. You may not care for the wicked queen and you may not carry a lasting impression of the heroine but I guarantee you’ll never forget the residents of the forest glades. Just as you won’t forget little Dopey, the Harpo Marx-esque
member of the seven dwarfs. 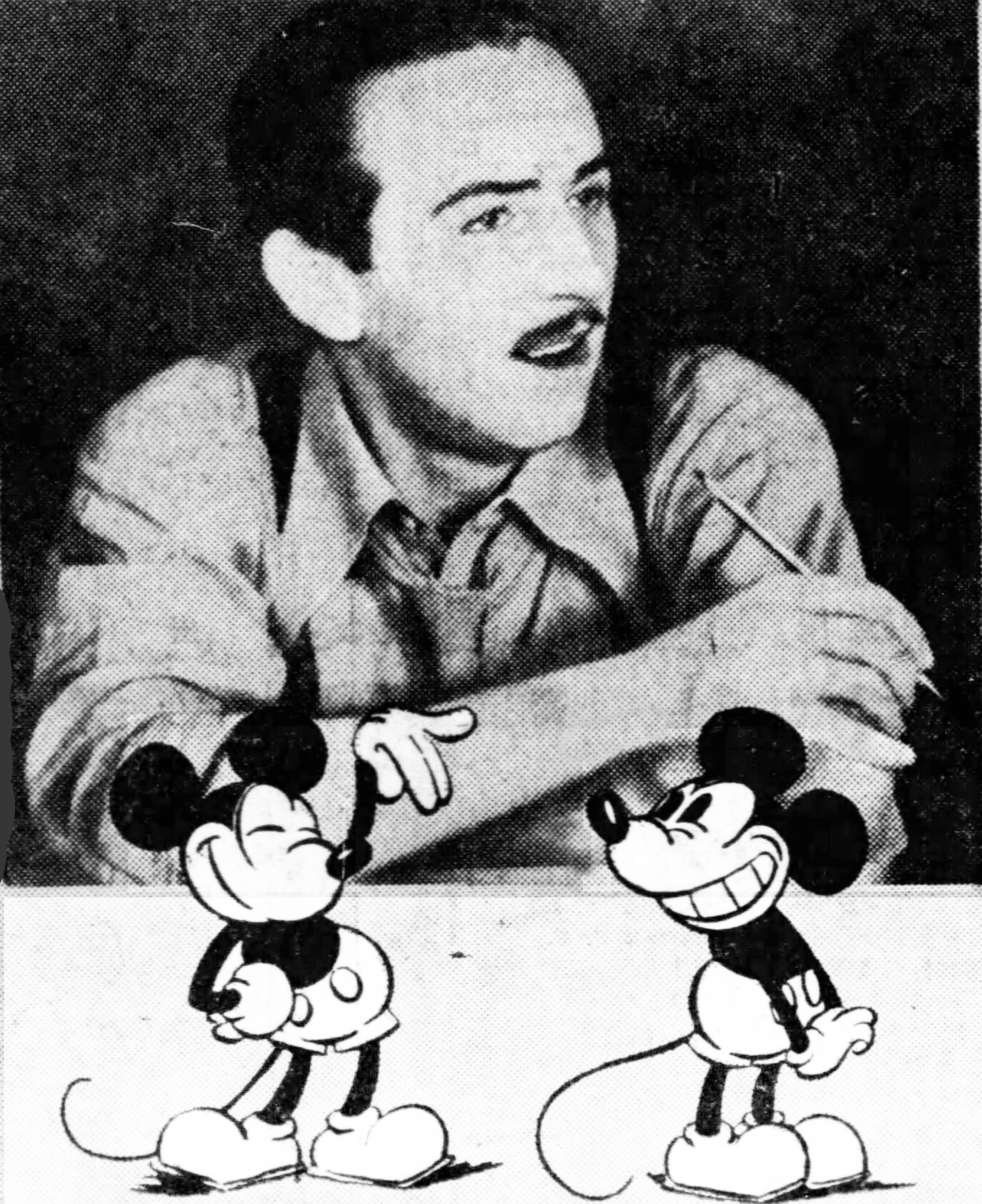 The technique of animated cartoons you probably understand. The background shot is painted in a celluloid frame, which is fastened down on pegs. Other celluloids are fastened down on top of the background, to provide the figures of the little actors. The camera, shooting down, takes a picture of the three celluloids, one over the other. That is one frame of film. An attendant then picks off the celluloids on top, leaving the background celluloid on the pegs. Now he refers to his indexed sheet and places two other celluloids on top of the background. These celluloids advance the movements of the actors minutely. The camera snaps a picture of this. It is in this way that his characters are shown in motion, each celluloid carrying forward the action of each character.

Best way to visualize the process of animation is to remember when you were kids and got as a present a pack of cards showing the Jeffries-Johnson fight. By thumbing the cards rapidly you could see Jeffries and Johnson actually fighting and throwing punches. Animation on the screen is exactly that. As the frames of film flash by the camera projector you achieve the same effect accomplished when you thumbed the cards.

Animated cartoons on motion picture film date back as far as 1906, when J. Stuart Blackton made “Humorous Phases of Funny Faces” for Vitagraph. At that time Disney was exactly five years old. But Disney made the first animated cartoon with sound, and therein he was a pioneer. His “Steamboat Willie,” with sound, which introduced Mickey Mouse, was released Sept. 19, 1928, at the Colony theater in New York City.

Strength of Disney is, in addition to his own creative ability, the fact that his actors are not temperamental, never get in public scandals, draw no salaries, have no trouble in keeping slim, never argue about billing or dressing rooms and work in as many pictures a year as he indicates. He has this game beaten every way from the jack. 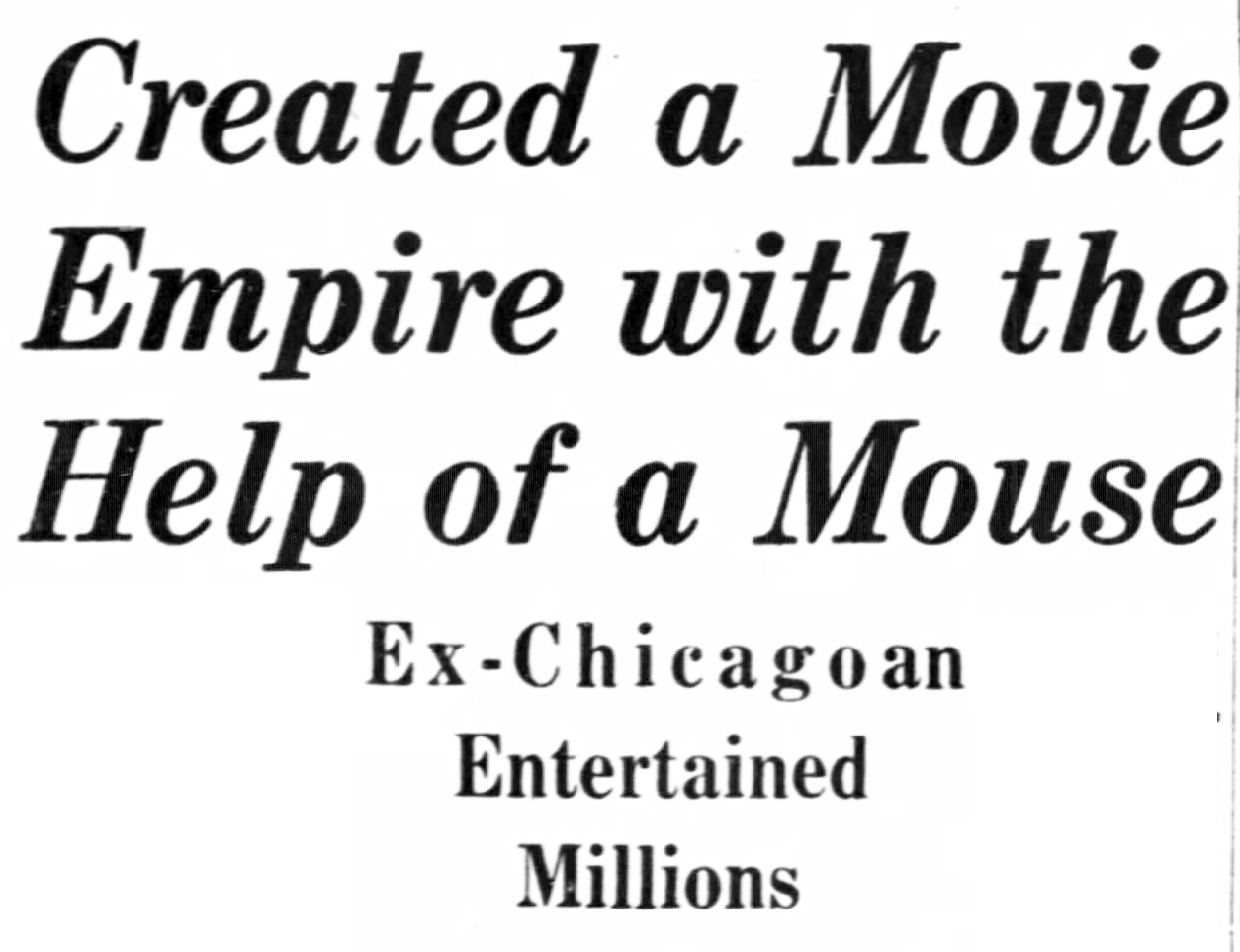 Burbank, Cal., Dec. 15—Walt Disney, 65, who created an entertainment empire from a cartoon character and was host to children and kings alike, died today in St. Joseph hospital.

Disney had undergone surgery in the hospital for removal of part of his left lung a month ago. Physicians refused to say whether any malignancy has been discovered. He reentered the hospital Dec. 5, his 65th birthday, for a post-operative checkup.

Born in Chicago
The man of medium height, with graying brown hair and mustache, was a familiar sight on television as the host of the Wonderful World of Color and as he roamed Disneyland, as excited as his guests at the park’s attractions.

Walter Elias Disney was born in Chicago Dec. 5, 1901. His family later moved to Marceline, Mo., but returned to Chicago where Walt became interested in drawing and photography at McKinley High school. He studied cartooning at night at the Chicago Academy of Fine Arts.

Returning at 18 to Kansas City, he got a job with a company that made still-picture slides for projection on theater screens. He experimented with animation films, using an old movie camera. He sold seven films to a New York distributor, but the venture was not successful and, in 1923, he arrived in Hollywood with mismatched coat and trousers, a sweater, drawing materials, and $40.

Walt and his brother, Roy, formed a partnership which was to endure to the end. They first filmed an “Alice in Cartoonland” series, combining child performers with cartoon characters. One of two girls hired as animators for the films was Lillian Bounds, later to become Walt’s wife. They had two daughters, Diane and Sharon.

Traveling from New York to Hollywood by train, and musing over a cartoon character, Walt remembered the mice who had romped in his Kansas City studio.

Other people would have lunch scraps in the waste baskets. What I didn’t eat, the mice came around to eat. One of them seemed bolder than the rest. There was a shelf above my drawing board, and he wouldn’t move off it. I called the mouse Mortimer. My wife renamed it Mickey for the screen.

The first two Mickey cartoons were silent and Walt couldn’t sell them. He made the third in sound, titled “Steamboat Willie,” and himself supplied the mouse’s squeaky voice.

From that time in 1928 Mickey became a hit, transcending race and nationality. He was “Michael Souris” in France, “El Raton Miguelito” in Latin America, “Mikki Kuchi” in Japan, “Mickey Maus” in Germany, “Topolino” in Italy, “Musse Pigg” in Sweden.

On D-Day of World War II, June 6, 1944, Mickey Mouse was the password at allied supreme headquarters in Europe. His movie fan clubs had more than a million members in the United States, and, later, youngsters all over the country joined a TV Mickey Mouse club, and donned cardboard mouse ears.