DIRECTORY.
As business is beginning to revive, and the publish are anxious to know the localities of our public offices and leading business houses. The Journal will publish from day to day the latest information on the subject. Below is given & list of localities so far as known at this writing ;

—Chicago Evening Journal, 15 and 17 South Canal street, near Randolph.
—Board of Trade, 51 and 53 South Canal street.
—Post Oflice. Burlington Hall. corner Sixteenth street. Soon to be removed to Plymouth Church, corner Wabash avenue and Eldridge court.
—Western Union Telegraph Company, 63 South Canal street.
—Common Council, new Congregational Church, corner of West Washington and Ann streets.
—Board of Public Works, Masonic building, corner of West Randolph and Halsted streets.
—The officers of the Illinois Central, and Chicago, Burlington and Quincy Railroads will be found at the ruins of the old depots. Their vauits are in great danger.
—Custom House, U.S. Depository, Marshal’s office, U. S. Courts, U. S. Commissioner Hoyne, will be located in the old Congregational Church, corner of Green and Washington.
—The office for the arrival and departure of vessels, at Light House.
—The Tribune office is in the same building as The Journal.
—United States Pension Ofice, rear of a drug store at the corner of State and Sixteenth streets.
The address of the agent, D. Blakeley, is 581 Michigan avenue,
—Merchants’ Savings, Loan and Trust Company can be found at the residence of the President. Mr. S. A. Smith, 414 Wabash avenue.
—The proprietors of the Sherman House have bought P. W. Gates’ Hotel, corner Clinton and Madison streets, and wil open immediately.
—The Matteson House proprietors can be found at 579 West Washington street, where all business will be transacted.
—The Tremont House proprietors have purchased the Michigan Avenue Hotel, where they are now stationed.
—The Headquarters of Citizens’ Patrol Police (organized yesterday afternoon), are at the Engine House on Thirty-first street, west of State.
—The Pacific and Atlantic Telegraph offices are situated at No. 354 Clark street.
—The Pullman Palace Car Company have stationed their office at the corner of Eighteenth street and Prairie avenue.
—The Lumber Exchange is at the southwest corner Lake and Market streets, where the importers and dealers can be found.
—Board of Education, No. 271 West Randolph street, between Sangamon and Morgan streets.
—After to-day the Mayor’s office, City Comptroller’s, City Treasurer’s and other city offices will be at the corner of Hubbard court and Wabash avenue. The department of the Board of Public Works and the other departments of the city Government will be located in the same vicinity.
—J. H. McVicker may be found at No. 796 Michigan avenue, where he will do all in his power to help the needy ones of the profession.
—County Physician Miller’s office is at the Union Street Police Station, corner of Madison,
—The Morgue is temporarily at No. 6d Milwaukee avenue.
—The Evening Mail office in Lind’s Block, east end of Randolph street bridge.
—The Briggs House is at the Laclede Hotel, near Madison street bridge, where hosts Wentworth & Woolworth can be found, ready to entertain guests.
—The Assessor and Collector of Internal Revenue have established their offices in Congress Hall, in rear of Michigan Avenue Hotel, corner of Congress street and Michigan avenue.
—The First Precinct Police Station has been removed to church corner of Third avenue and Polk street.
An office of the Lakeside Monthly has been opened at 855 West Madison street. The continued publication of the Monthly is assured. 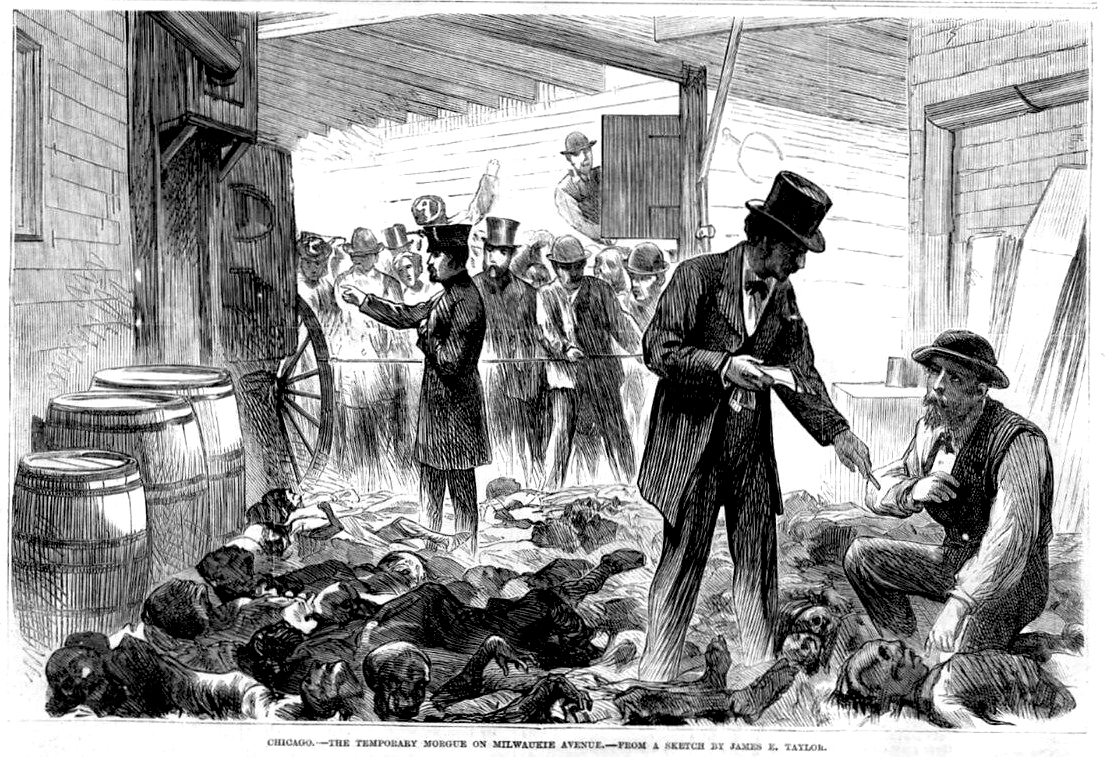