Arcturus Panel
Each night a signal from the Star Acturus is flashed from the astronomical observatories of Harvard, Allegheny College, University of Illinois, and Yerkes, to the panel, and automatically turns on the lights on the Exposition Grounds-Messrs. Thomas (Westinghouse), Underwood (Western Union), and Sanborn (General Electric developed and handled the Arcturus Lighting Ceremonies.

Technological innovation through scientific progress was the theme of the 1933 fair. What better way, thought Yerke’s director, Edwin Frost, to highlight the benefits of science and link the 1893 and 1933 events than by focusing the light of Arcturus onto a photocell and using the electric current generated to flip a switch that would turn on the lights at the fair’s opening.

Though we now know Arcturus is 37 light years away, at the time it was thought to be about 40. The light that left the star during the first world’s fair in 1893 would arrive just in time 40 years later to open the next. Arcturus was not only at the right distance but bright and easy to see during May at the fair’s opening. Could a more perfect marriage of poetry and science ever be arranged? 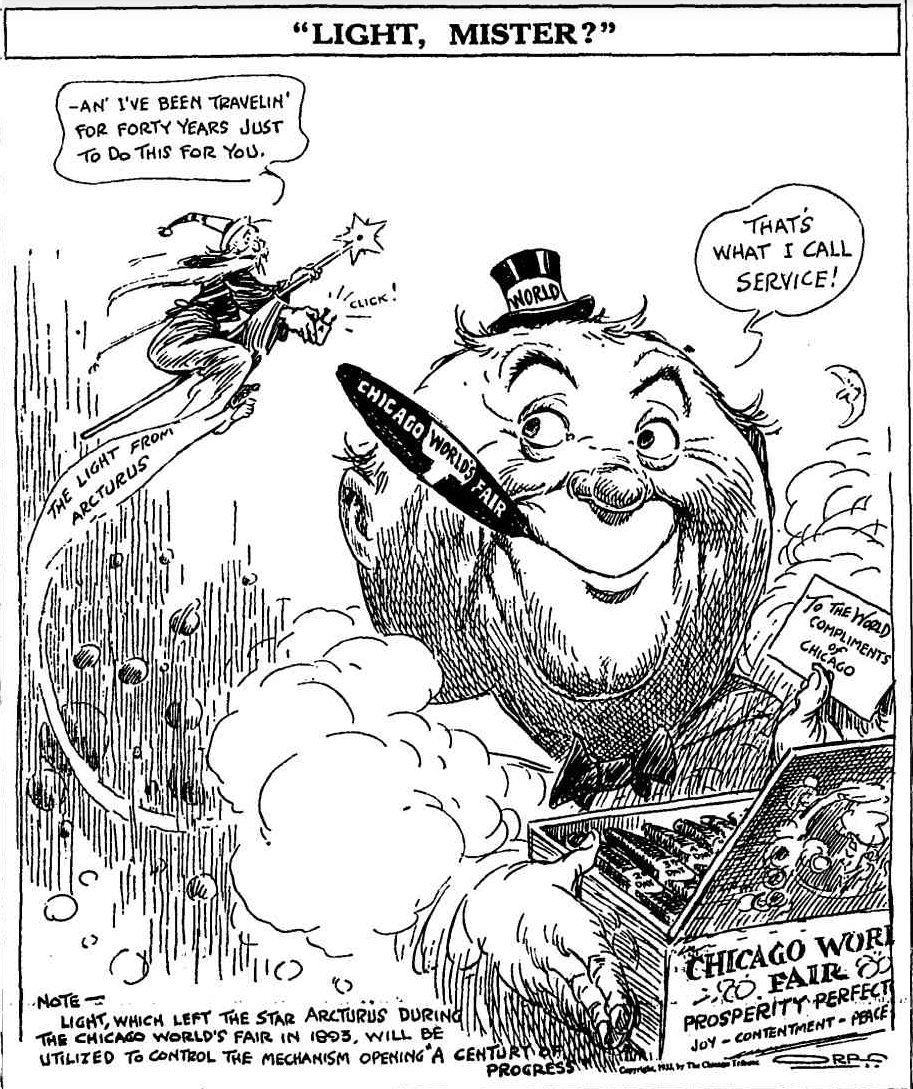 “Light, which left the star Arcturus during the Chicago World’s Fair in 1893, will be utilized to control the mechanism opening ‘A Century of Progress.'”
Chicago Tribune
May 25, 1933

No matter what the weather conditions are in the Chicago region, the faint light from the star Arcturus will be caught somewhere on Saturday night to open A Century of Progress Exposition.

It is planned to capture the light which left Arcturus 40 years ago, on photo-electric cells at Yerkes observatory, Williams. Bay, Wis., build up the faint current caused by the light, and transmit it over wires to a switch control on the fair grounds.

To insure the success of the plan against possible cloudy weather at Williams Bay, the Harvard university observatory at Cambridge, Mass., the University of Illinois observatory at Urbana, and the Allegheny Astronomical observatory at Allegheny. Pa., are also ready to catch the light from Arcturus.

The Western Union Telegraph company has provided lines direct from each of the four observatories to the exposition, and at a given time all will expose sensitive photo-electric cells to the light of the star. A signal from each observatory will close a contact there and the closing of the last contact will complete a circuit to operate a master switch on the Fair Grounds.