Hudson Terraplane Ruggedness Run
Hudson Motor Car Company of Detroit introduced the Terraplane automobile line in 1932. They were inexpensive, but powerful vehicles that were used in both town and country, as both cars and trucks bore the Terraplane name. Orville Wright and Emilia Earhart were among the first owners of the new model.

Hudson planned about 20 such Ruggedness Runs across the country, each using a 1934 Terraplane already in the hands of a customer, sent out for two weeks straight on pre-selected circuits (or “Ruggedness Routes”) of 1,500 to 1,800 miles. Hudson did not have a presence at the World’s Fair, but was able to create some excitement by entering a car that started the Ruggedness Run in Chicago. Unclear as to why the car has a Wisconsin license plate.

Not sure how “rugged” a ride that includes Wisconsin, Illinois and Indiana would be, but then again, it was 1934. 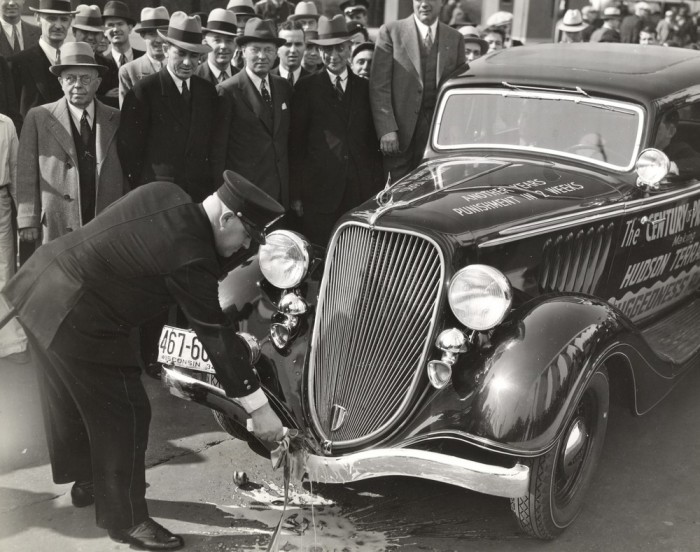 Henry Sheldon, Chicago policeman, breaks a bottle a bottle of sparkling Burgundy over ‘A Century of Progress Ranger’ officially launching a Hudson Terraplane Coach on a ruggedness run, which will cover four states. The test will continue two weeks and the car is expected to roll up a year’s mileage in that time. Sheldon, who resides at 5705 Seminole ave., was the winner of a contest in which the name of the car was selected.