The Enchanted Island
Five acres of land in A Century of Progress are set aside for children and for grownups, too, who still can feel the thrill of make believe. The Enchanted Island lies between the lagoon and the lake, and from it rises a towering mountain. About it are giants, and through the area on Northerly island move guards and other employees as out of Fairyland, dressed appropriately for their parts.

A huge push-wagon stands fifteen feet high, with a big boy on its top who moves, and underneath it is a shop where wagons are made. There’s a house of marbles, and a children’s restaurant. There are story telling ladies, and playgrounds with all sorts of devices.

The youngsters can slide down the mountain side, and there’s a fairy castle, a mechanical zoo, a miniature railroad, a marionette show. They have their own theater, too, with plays staged by the Junior League of Chicago; such as “Peter Pan,” “Cinderella,” “The Birthday of the Infanta,” “The Ordeal of Sir Gawayne,” and “The Captivity of Eleanor Lytle,” which is a true story from the life of Mrs. John Kinzie in the early days of Chicago.

There are trained attendants who will amuse the children while their parents go away to other parts of the Fair to enjoy themselves. It’s a land of allure for the children, a spot they’ll never forget, even when they are as old as their parents now are.

Entrance to the Enchanted Island, The Children’s Fairyland 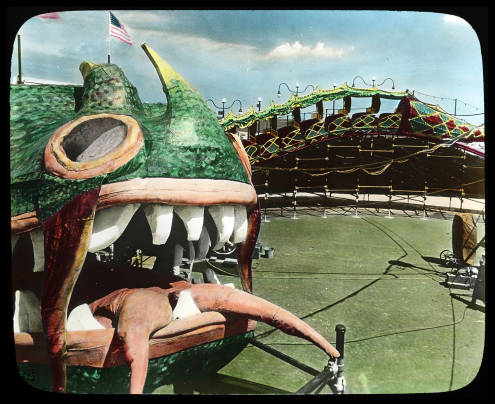