Stamps of the Century of Progress
The U.S. Post Office Department issued three stamp designs for the 1933 fair, with a total of seven varieties. On May 25, 1933, a 1¢ stamp for the postcard rate and a 3¢ stamp for the letter rate promoted the fair just days before it opened (Scott 728 and 729). The green 1¢ stamp depicted Fort Dearborn, which had protected the mouth of the Chicago River in the pioneer days and had been restored in 1816. A replica of the fort was a popular attraction at the fair. The violet 3¢ stamp’s vignette featured the fair’s streamlined Federal Building (Arthur Brown Jr. and Edward H. Bennett, architects). Its three fluted towers represented the three branches of federal government: executive, legislative, and judicial, and inside it housed government exhibits. The 3¢ denomination was in Roman numerals, the first U.S. stamp since the 1847 10¢ George Washington to feature that element.

The three stamp designs not only promoted the Chicago world’s fair, they also promoted the idea of progress. The 1- and 3¢ stamp images contrasted the old federal government to the New Deal government of 1933, emphasizing the changing and improved role of government services. The zeppelin embodied technological progress as the world’s largest flying craft. Further, a Chicago Daily Times newspaper editorial (October 26, 1933, page 5) praised the Graf Zeppelin visit to Chicago as emphasizing the internationality of A Century of Progress and the kind of progress the fair was designed to celebrate. 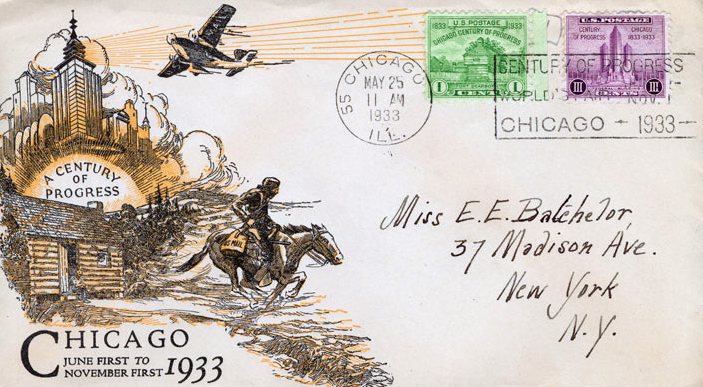 On September 25, 1933, the German government issued a new set of zeppelin stamps, utilizing the existing stocks of the Weimar Republic zeppelin issues of 1928-1931. The new stamps, shown above, were overprinted in black (1 Rm.) or in brownish black (2 Rm., 4 Rm.) with Chicagofahrt Weltausstellung 1933 or Chicago World Exhibition Flight 1933. The characteristics of these stamps are identical to the original 1928-1931 issues.

After initial opposition by the United States Post Office, and President Franklin Roosevelt’s rejection of the idea of another expensive zeppelin stamp, the U.S. Post Office agreed to issue the new stamp. At the the end of the airship’s last flight to South America, in October 1933, the ship detoured through the United States, for stops in Miami, Akron, and Chicago.