The Towering Skyride
Two towers stand like giant sentinels, 1,850 feet apart, seeming to guard the Hall of Science on the Mainland, and the Hall of Social Science across the Lagoon support of the spectacular Skyride, great thrill feature of A Century of Progress. Back in ’93, it was the monster Ferris Wheel that everybody talked about, and everybody rode. Today, striking example of the progress of science even in thrill makers, is this suspension bridge principle applied to an entertainment feature and perhaps the near solution of some problems of overhead transportation. 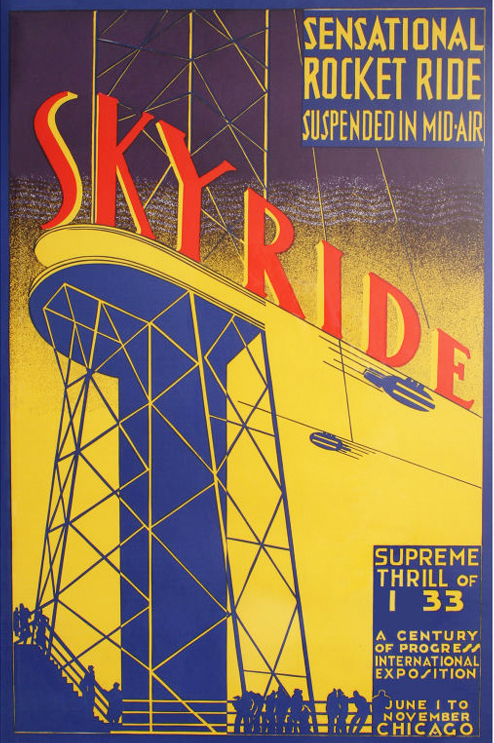 They are higher than any building in Chicago, these two strong steel towers, imbedded deep in cement. Six hundred and twenty-eight feet they rise into the skies, with observation floors atop them. If you stand in one of these observation rooms at night and look down, you gaze upon a magic city that seems to float in a vast pool of light. From the towers, great searchlights sweep the sky, the lake, and over the great city to the west, to clash with other massive beams of light. In the day, look down, and it is a pattern of many hues, like a gigantic, gay rug, or a vast garden of colorful flowers. Far to the south you look upon Indiana, and to the north upon Wisconsin, to the west, Chicago and Illinois, and eastward across the lake you can see Michigan. Airplanes, and dirigibles may pass, as cars do on the ground, and clouds may swirl about you. You are standing a hundred feet higher than the observation level of Washington monument.

On a 200-foot level the rocket cars offer you a beautiful and, mayhap, thrilling ride across the lagoon. These cars are suspended from a cableway which has a breaking strength of 220,000 pounds per square inch of cross section. Only one span in the world, that of the George Washington bridge across the Hudson River just above New York City, exceeds the Skyride cableway in length. The towers and rocket cars can handle 5,000 visitors an hour.

The Skyride was built by five great companies, Otis Elevator Company, Mississippi Valley Structural Steel Company, John A. Roebling’s Sons Company, Inland Steel Company, and Great Lakes Dredge and Dock Company and is an appropriate expression of their faith in the future of American industry. 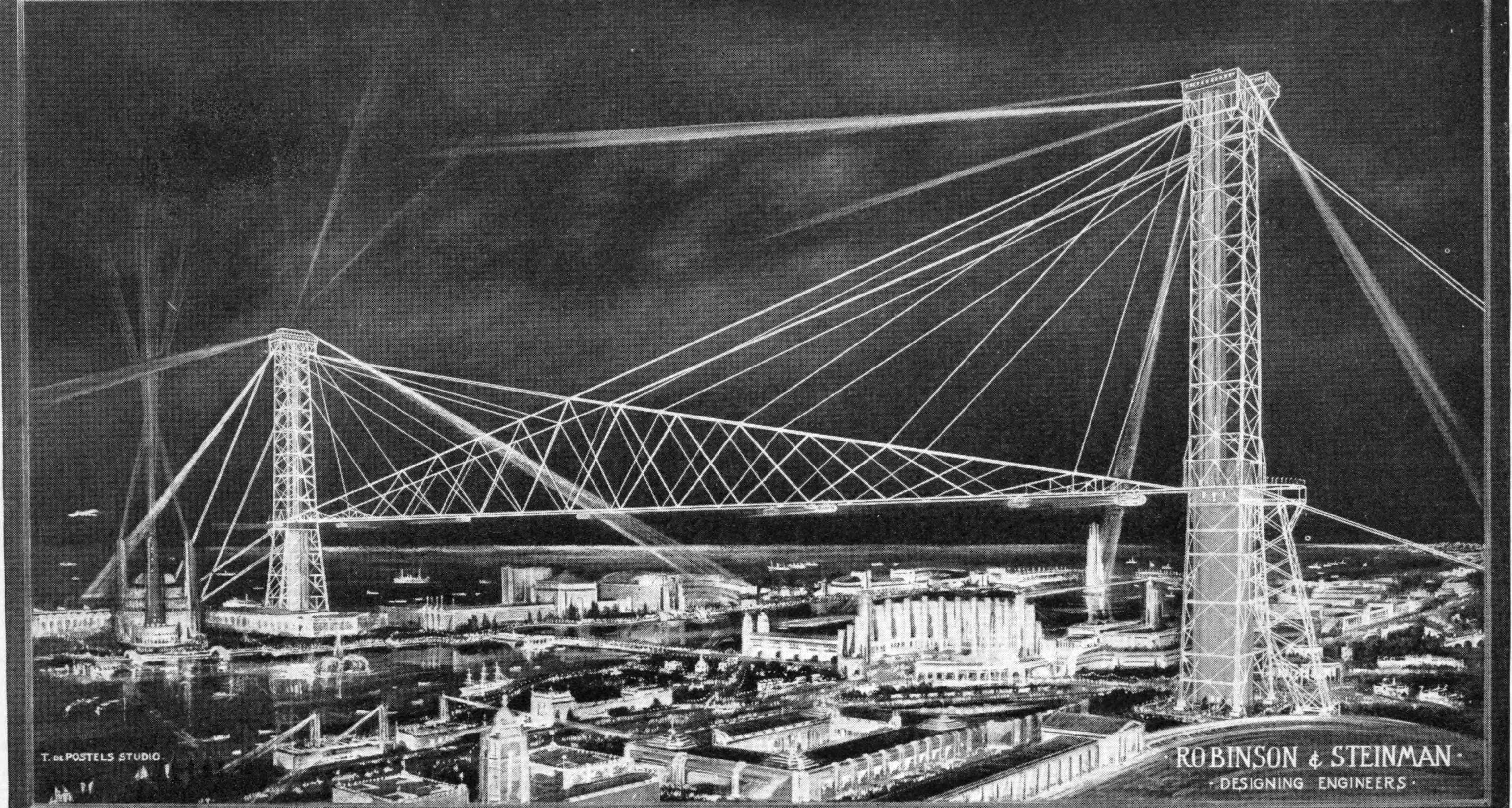 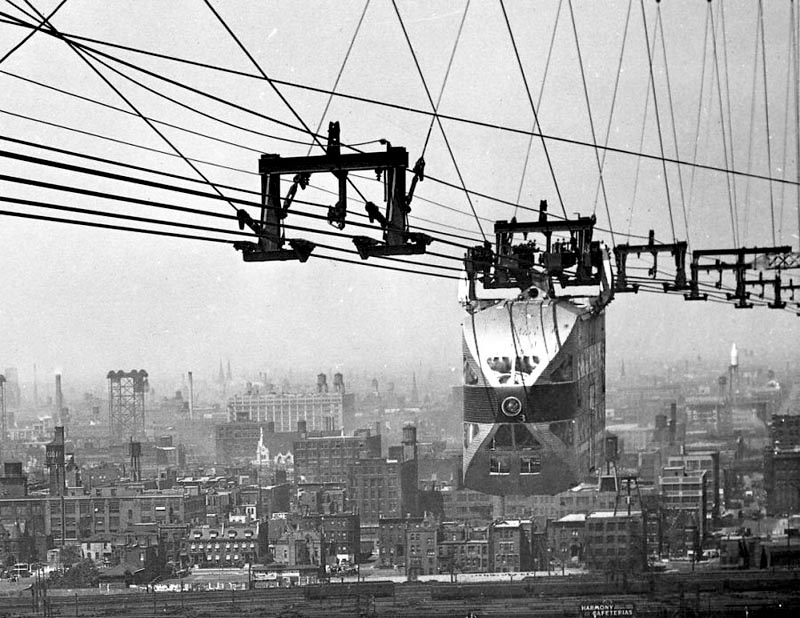 Sky-Ride “rocket” car crossing the lagoon between Northerly Island and the lakefront. Each car fit 36 passengers who paid .40¢ for a 4 minute ride. 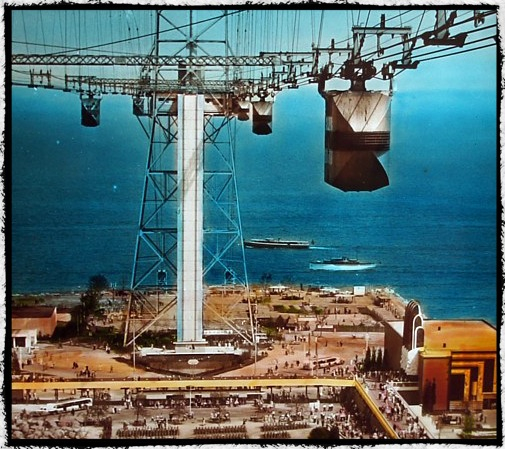 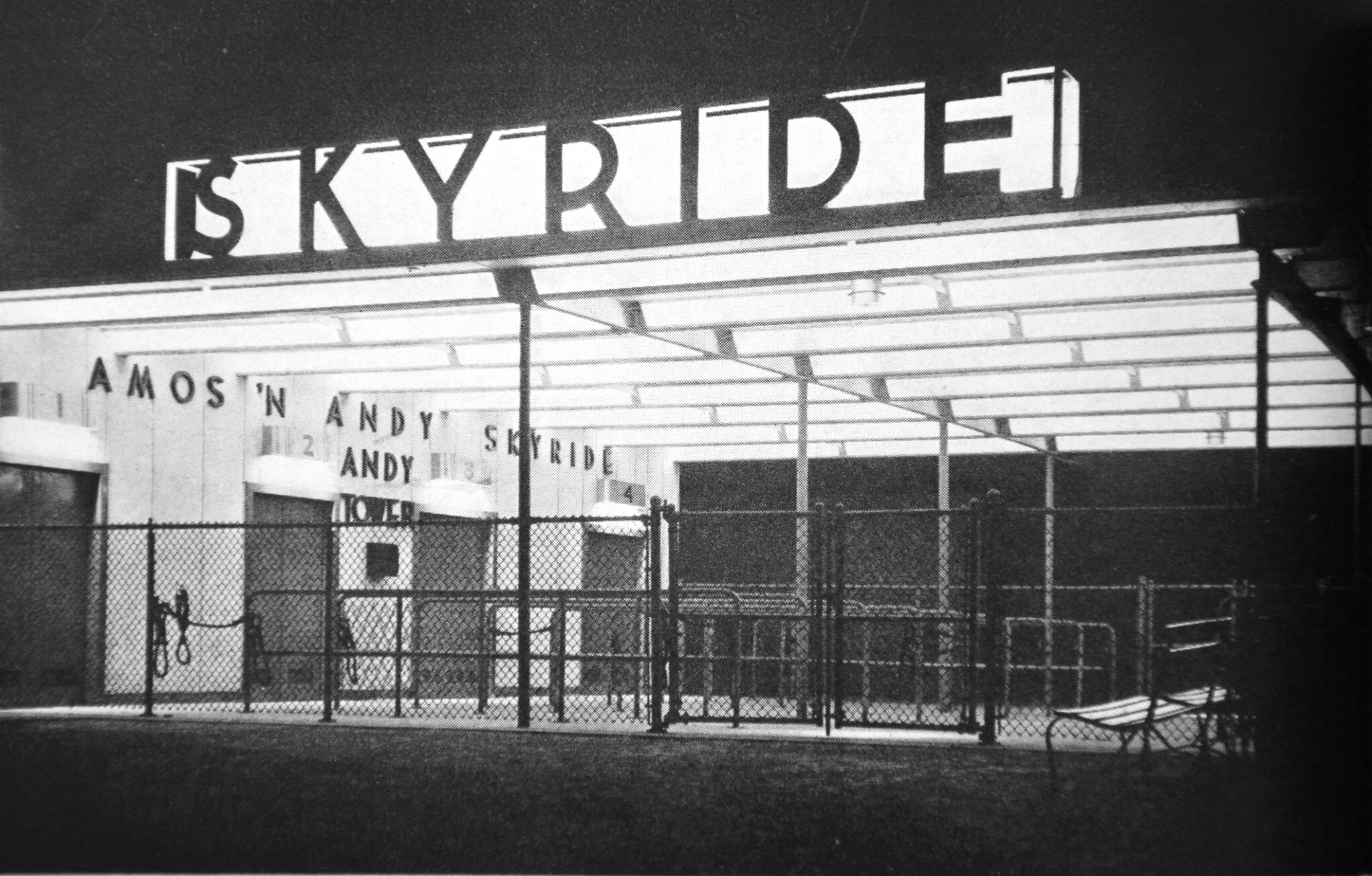 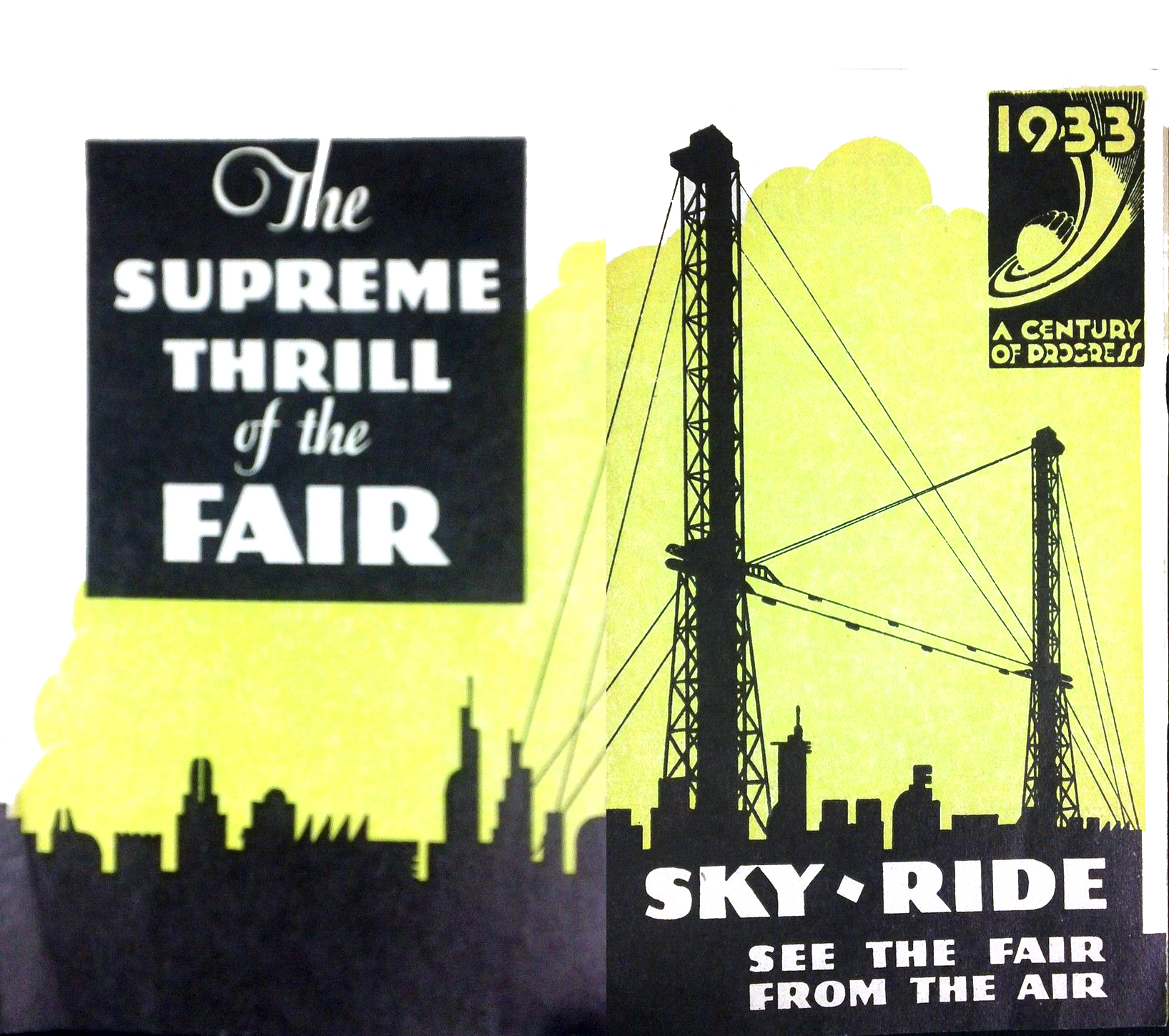 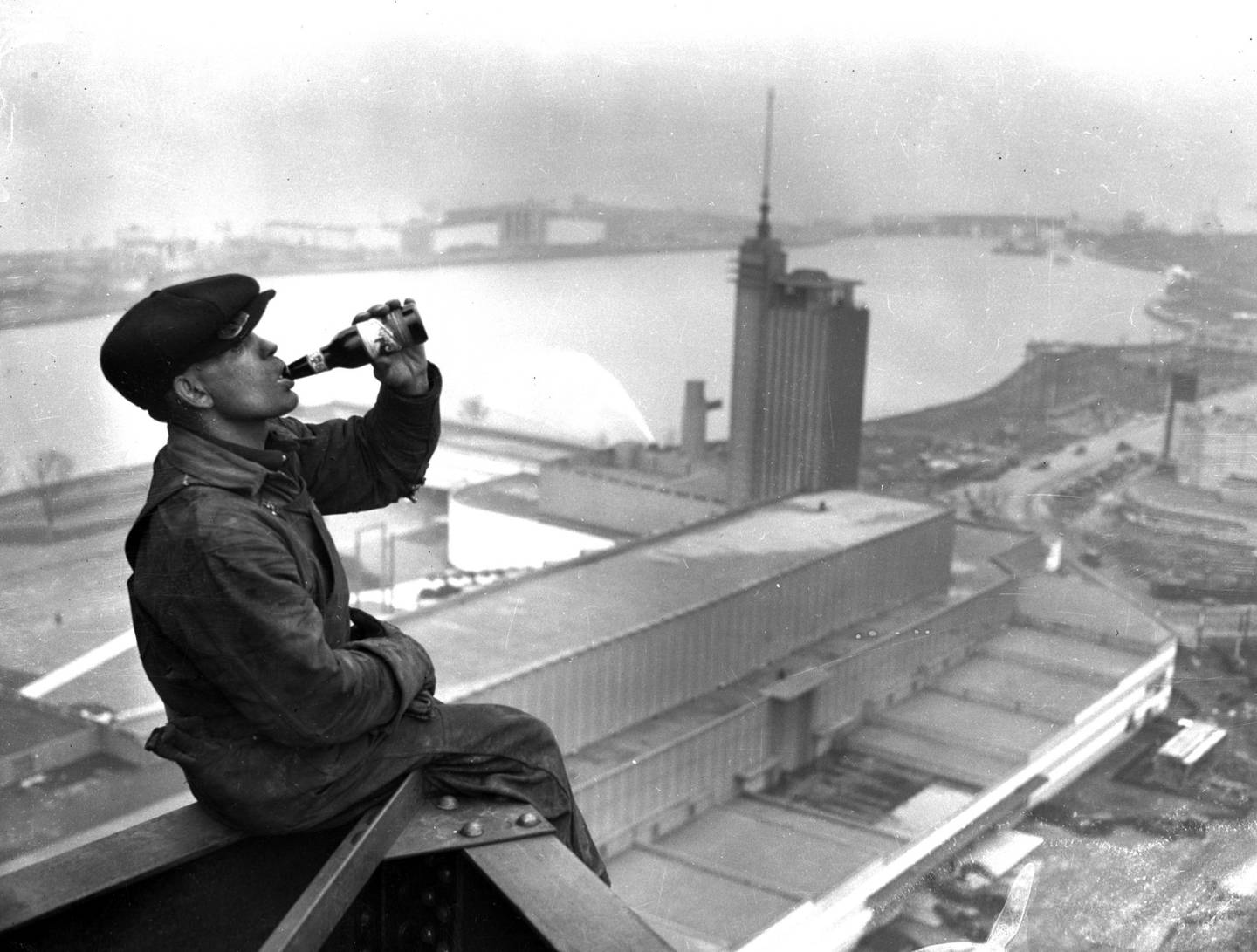 An iron worker, perched on the west tower of the Sky Ride, drinks an Edelweiss beer during construction of the World’s Fair in 1933. When completed, the Sky Ride consisted of two, 625-foot-tall towers that straddled the lagoon between Northerly Island and the lakefront. The ride had rocket-shaped cars that transported 36 fair-goers across the lagoon at a time.

Interesting Facts about the SKY-RIDE

Height of Towets—628 feet-64 stories. The highest points in Chicago.
Height of rocket ride—219 feet-23 stories.
View—Four states visible from towers tops on clear day.
Elevators—Four to each tower. Two to the 219 foot level and two to the top. Speed-Low rise Cdrs, 500 feet per minute, cdpacity 30. High rise CarS, 700 feet per minute, capacity 20. There is an interesting exhibit of elevator machinery at the tower tops.
Rocket cars—Ten in number each weighing. 6,200 pounds. Capacity, 36 pdssengers. Speed, 520 feet per minute, about 6 miles per hour.
Rocket cer operetion—Traction cable pulls cars as they leave the trusses jutting from each tower. The cars operate on their own motors into and out of the loading and unloading platforms.
Spen—1,850 feet, second longest in the world. The distance between counter-balances is 3,050 feet.
Employment—1,652 men in various phases of the work.